Avatar: The Way Of Water Continues To Reign At The Box Office: We are already past the second week of 2023, and with no new major releases this week, the week belongs to James Cameron’s Avatar: The Way of Water. James Cameron’s sequel to the highest-grossing film ever, Avatar, continues to impress audiences and retains a steady flow of viewers to the cinema halls in the fifth weekend of its release. The science fiction film added $7 million to its U.S domestic collections on Friday itself, taking its gross domestic total to $538 million.

With continued audience interest and the lack of competition, this Sam Worthington and Zoe Saldana starer film is expected to be the first film released post-pandemic to reach the $2 billion mark; with $1.7 billion of earnings already, the mark doesn’t seem a far way off.

The science fiction horror film M3GAN scares its way to becoming the second highest-grossing film this weekend. This Gerald Johnstone-directed film about a sentient artificially intelligent doll, M3GAN (Model 3 Generative Android), and the creepy misadventures that follow when it is given to a young girl has been holding strong at the box office. This campy horror satire is expected to earn over $20 million over the weekend.

With gross domestic earnings of above $43 million, the film is playing in 3605 theatres in the US and has a good per-theatre average of $1345. This film will be scary good for the producers as the numbers suggest steady earnings soon. The creepy doll has already become popular among audiences, and we can expect to see a lot of M3GAN costumes this way on Halloween.

Sony Pictures, Tom Hanks starrer A Man Called Otto moves a rank up from last week to become the third highest ranking film at the box office. The film made above $4 million domestically in the last week taking its domestic gross earnings to $10.2 million. 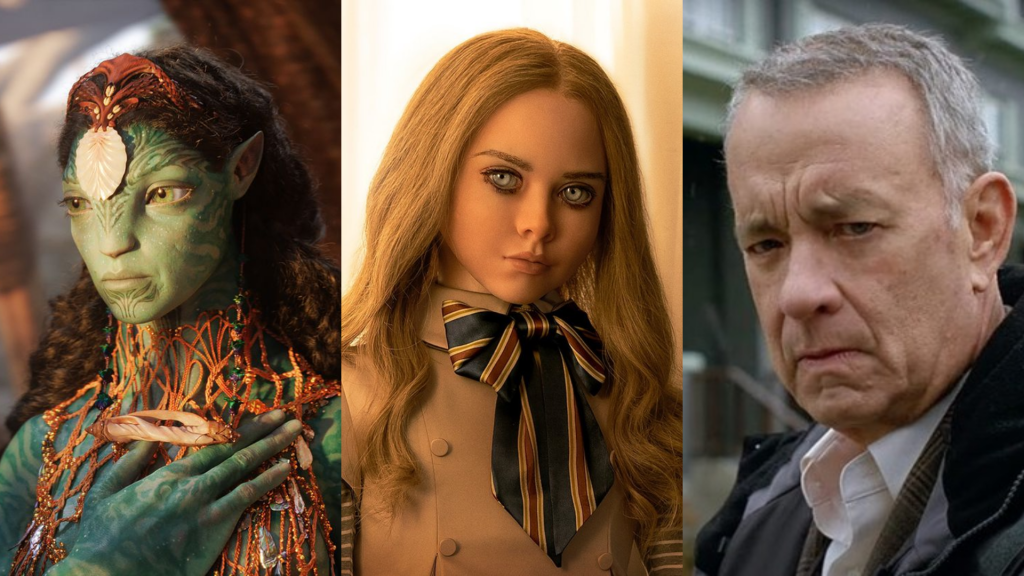 This heart-warming comedy-drama directed by Marc Foster is about the friendship between a cynical grumpy widower who contemplates suicide and a quick-witted pregnant woman based on a novel by Fredrik Backman titled A Man Called Ove. The film is currently playing in 3802 cinemas in the US with an average per cinema earnings of $1065. The film is expected to earn over $14.9 million over the course of the weekend.

Universal Pictures’ adventure action-comedy animated film ‘Puss in Boots: The Last Wish,’ the sequel to Puss in Boots (2011) set in the ‘Shrek’ universe, takes the fourth spot at the box office, a place down from last week.

This, however, is just a minor concern for the studio as the Antonio Banderas, Salma Hayek, Harvey Guillen, Florence Pugh, and Olivia Colman starrer is still performing steadily and is expected to cross the $100 million earning mark domestically by the time the weekend ends. The film is currently playing in 3687 cinemas in the US, with an average per cinema earnings of $822.

The film follows the emergency landing of a plane to escape a dangerous lightning situation on a war-torn island where dangerous rebels take most of the passengers’ hostage. The thriller film earned $3.5 million on the opening day itself and is expected to be $10 million over the weekend.

Warner Bros. Picture comedy film House Party, a reboot of the 1990 film of the same name, was released this week. Although critically panned, the film managed to earn $1.4 million domestically on the first day of its release, and the future looks grim for this comedy film.  Darren Aronofsky’s Brendan Fraser starrer The Whale managed to cross the $10 million gross earning line domestically, a significant milestone for an indie film.