Akira Kurosawa is undoubtedly one of the most influential filmmakers of all time – and his influential work of filmmaking is usually delivered in the art which is inherently very much genre-based. Whenever we hear the name of Kurosawa, any self-proclaimed cinephile’s head gets immediately filled with images of samurai armor, sword fighting scenes, long tracking shots, and of course Toshiro Mifune, Kurosawa’s muse and the person he had the longest partnership within his entire filmography.

Kurosawa was also a huge fan of western and Hollywood art and literature, and if his filmography would be explored, we would see that he was also influenced highly by Shakespeare, which isn’t surprising. Shakespeare’s works – his tragedy, comedy all influenced works of literature in every form directly or indirectly. Although Kurosawa’s adaptations of Shakespeare weren’t perfect, the strength of storytelling somehow retroactively strengthened the source material in the public consciousness.

Akira Kurosawa’s 1957 adaptation of Macbeth abandons the usage of prosaic English in favor of haunting atmospheric visuals, with the wind, fog, and rain to make the look of a Meiji Era apocalyptic wasteland. This is Mifune’s film through and through and Kurosawa lets Mifune go all out, and Toshiro Mifune acts as if unleashed, but amidst all of the theatrics and over the top nature of the script, it is notable that the scenes which stick to your mind are the quieter contemplative ones by Mifune’s Washizu or Macbeth, before all hell breaks loose.

Kurosawa wisely keeps the violence off-screen, because of which the last scene in this movie is so shocking. Even though this isn’t faithful by any means, the spirit of the Bard lives in this film, making it one of the better adaptations of Shakespeare’s plays. Throne of Blood also helps to cement the idea of Macbeth being a fearsome warrior, something which wasn’t readily understandable in the original.

Incorporating Macbeth with elements of Noh theatre or Noh classical drama gives a sense of surrealism in the movie – Kurosawa’s visual representation of the three witches as a single spirit spinning cloth (some interpretation would show it as the loom of fate) when Washizu(Macbeth) and Miki(Banquo) first meet him, and when Washizu later meets him in the Spider’s Web forest, we see the spirit changing his appearance, via dance, smoke, and mirrors to showcase the different aspects of Washizu’s current mental state – this is one of the defining characteristics of Noh theatre, following a single main character called the Shite in stories filled with dreamlike emotion.

That sense of solipsism in the movie causes a lack of character development in almost all the supporting characters except maybe Asaji or Lady Macbeth; though I liked this version of Banquo, he comes off as a much more interesting and wiser counterpart to Macbeth. What Throne of Blood also does well is, because it doesn’t owe any fidelity to the original, it turns out to be one of the more satisfactory Shakespeare adaptations. 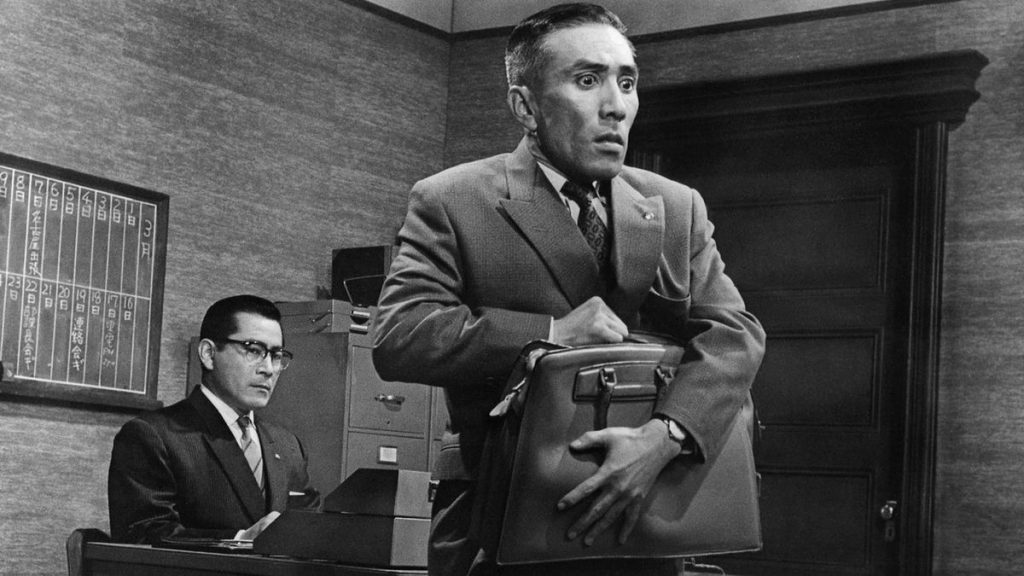 There is a singular theme running around most of Kurosawa’s movies – his contemplation and jibe on a postwar Japan, be it in his samurai movies or his lesser-known noir films. While his first noir – 1949’s Stray Dog is a highly influential work of film, his 1963 masterpiece High and Low is a much more expansive and nuanced portrayal of postwar Japan and paranoia associated with industrial espionage. Sandwiched in the middle of those two noir films, is a lesser-known noir called The Bad Sleep Well, it feels almost like a proto version of High and Low, but we are exploring this movie because again it is a looser adaptation of one of Shakespeare’s most famous works – Hamlet.

The bad sleep well is loosely based on Shakespeare’s Hamlet and follows Toshiro Mifune’s Nishi, who marries into a powerful family to exact revenge on them. The movie, while based on Hamlet, is a testament to Shakespeare’s mutability and Kurosawa’s capability to take the structure and themes of Shakespeare and set it in postwar Japan. The title of Akira Kurosawa’s The Bad Sleep Well suggests the film’s debt to American noir, but an alternate version of the title reveals even more in eight simple words: The Worse You Are, The Better You Sleep.

Similar to Akira Kurosawa – Haider [2014]: In the land of Blood, Snow and Chutzpah

In typical noir fashion, the movie delivers a chilling look into the corruption in the business and economy of Japan post World War II, matching with Kurosawa’s thesis in his movies of depicting Japan as a war-torn state both from the inside as well as outside. Shot in cinemascope, the bad sleep well would also be remembered for the deviations from the source material, small but pretty essential, and the technical aspects of the movie, especially the way shadows are used in the movie either to signify the presence of a “ghost” or the fractured mental state of a character.

However unlike say a High and Low or Stray Dog, this venture of Kurosawa takes a much more linear approach to storytelling, which unfortunately opens itself up to clunky storytelling, clunkier even by 1960s movie and even Kurosawa’s filmography. The exposition dump at the beginning of the movie, the characters using long monologue to describe what they are feeling in that moment and catching everyone up to speed, including the audience feels way too conventional. As a result, it is not as riveting as most of his other works.

As for the acting, the movie is again on the shoulders of Mifune, and he is a class act; a clean-shaven look almost makes him unrecognizable but he is unmistakably Mifune, and almost chameleon-like in the way he can play any type of character. The movie also benefits from an ensemble approach, like say a Seven Samurai, but that sometimes leads to pacing issues. Couple that with the clunky storytelling in some areas and this movie sometimes feels way too long. However, his visual storytelling, especially the ruined industrial sections of Japan depicted in the movie is chilling, and the ending, in particular, is haunting and tragic – almost expected from a Shakespeare adaptation of a tragedy. And while the ending might feel anti-climatic and somewhat inevitable, I would urge you – look at the title again. 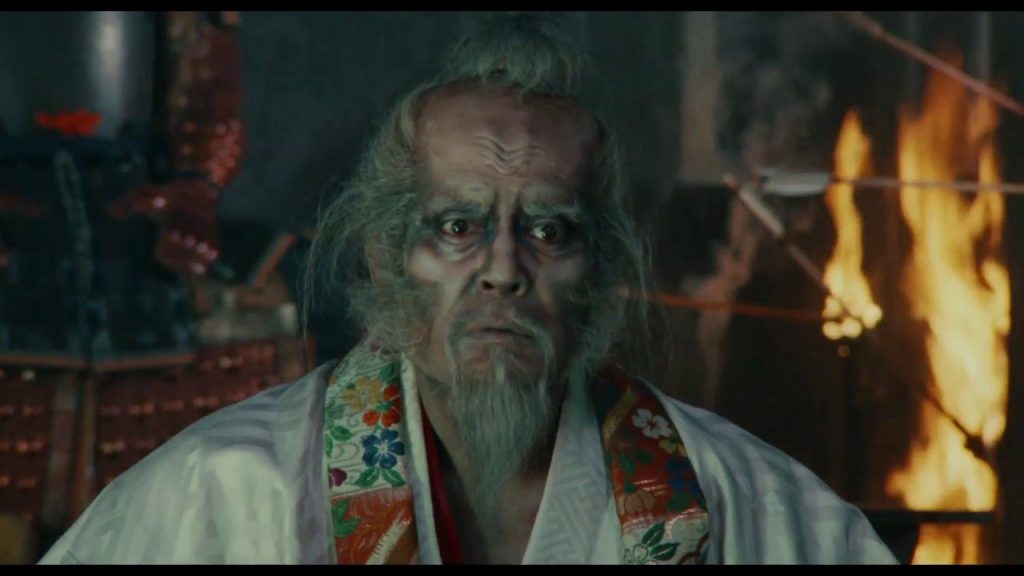 It seems that Kurosawa just wanted to show what his vision of a true samurai film on color would finally lookout. And if you thought anything less than exquisite he surprises you. Ran also feels like a coda by Kurosawa to the genre that made him so popular and well known. The sequence in the first castle during the first hour of the film felt almost like a hearkening or spiritual calling to Throne of Blood. What Unforgiven was to the western genre, the Irishman to the mob genre, Ran feels very much like that to the samurai genre.

Like Throne of Blood, Ran adapted from King Lear, tells the story of Hidetora of the Ichimonji clan and his decision to name his eldest son as the successor, and the horror it follows through. Weirdly, a Kurosawa samurai movie doesn’t have Mifune in it, but Tatsuya Nakadai as Hidetora is so good in the movie you forget pretty quickly. It is also pretty notable that Kurosawa’s such adaptations somehow retroactively strengthens the source material by providing backstories in the adaptations which weren’t there in the play – something Shakespeare was notorious for.

Ran feels very much like an ending – both literally and figuratively. Utilizing of guns by the opposing forces against Ichimonji’s forces makes you realize that the time of the Samurai too is coming to an end – the mano-a-mano fighting using katanas, depicting skills are discarded in favor of long-range attacks with a much larger scale of destruction. Like Throne of Blood’s ending with the arrows, showcasing the horrifying effect of a ranged weapon, Ran shows the evolution of that ranged weapon, and because its Kurosawa, the gore looks colorful and yet horrifying.

As I previously explained, somehow Kurosawa’s adaptations strengthened the original, by retroactively filling in backstories for characters which Shakespeare notoriously didn’t do. None of it is more noticeable than the character of Queen Kaede, the wife of Taro; it is not a coincidence that her character very much echoes the character of Asaji in Throne of Blood, two women who are manipulative and more powerful than the men who are ruling the world they are currently living in.

The second definite expansion of character is that of the fool Kayomi – while initially, he is like any typical fool in a Shakespeare play, Kayomi slowly becomes an audience surrogate in exploring the viewers’ frustration with Hidetora’s degraded mental state. It is also notable that like any theatre production, Kayomi is the only character who breaks the fourth wall, not to dump exposition but to try to analyze and understand Hidetora, like the viewers, are trying to do too.

The music is haunting, operatic, and chilling and somehow the color film brings out the majestic of the genre, with wide-open spaces, lush green valleys in sharp contrast to the pool of gushing red blood, and the orange flickering of gunpowder through the muskets. Ran is the samurai genre at its peak, an aging filmmakers ode to mortality through the genre he was always known for.