Netflix film The Trial Of The Chicago 7 (2020) producers confirmed that they plan to put most of the ensemble cast up for Best Supporting Actor Oscar nominations this award season. Following the strategy of past films like Spotlight (2015), the film is positioning itself to land maximum number of acting nominations along with being a front runner for the Best Picture Category.

The film, written and directed by Aaron Sorkin, is a socio-political drama based on the infamous 1969 trial of seven defendants charged by the federal government with conspiracy and more, arising from the counterculture protests in Chicago at the 1968 Democratic National Convention. Although Sorkin named his film after the Chicago 7, the group were originally referred to as the Chicago 8, as one of the defendants was severed from the group case.

Sascha Baron Cohen, stars as the activist and Youth International Party (Yippies) co-founder Abbie Hoffman, one of the seven defendants tried in court for inciting riots. Baron Cohen stands to win the most with this nomination strategy, as partnered with a well received performance in Borat: Subsequent Moviefilm (2020) released by Amazon Prime last week, he may be able to snag his first acting nomination. He has won an Oscar for the Best Adapted Screenplay for Borat (2006).

Eddie Redmayne, is featured extensively in the film as Tom Hayden, the more strait-laced leader of Students for a Democratic Party. He is no stranger to awards campaign as he secured back to back nominations for Best Actor for his lead roles in The Danish Girl (2016) and The Theory Of Everything (2015). Redmayne won the Oscar for The Theory of Everything (2015). 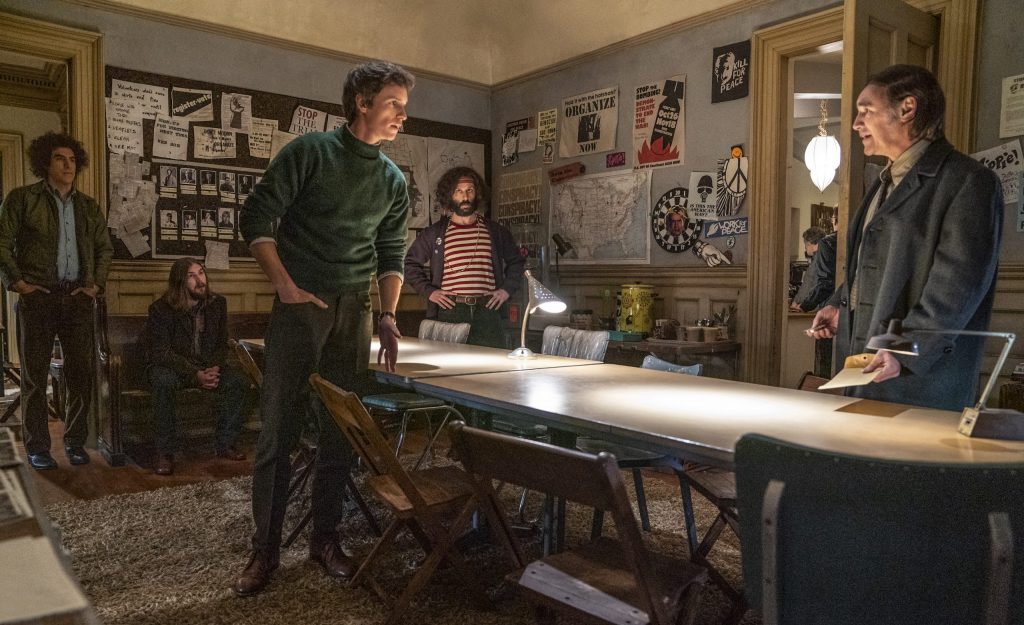 Mark Rylance, who plays defense attorney William Kunstler in the film, is likely to be popular among voters as he has already won a Best Supporting Actor for Bridge of Spies (2016). Michael Keaton, who although has the smallest role of the main cast, received a lot of positive reviews as former US Attorney General Ramsey Clark. Keaton was nominated for the Best Actor Oscar for his starring role in Birdman Or (The Unexpected Virtue Of Ignorance) (2014).

Yahya Abdul-Mateen as Bobby Seale, National Chairman of the Black Panther Party and the ‘eighth’ defendant, commands the film early on with his performance. Jeremy Strong, of Succession fame, as Jerry Rubin, founding member of the Yippies and John Caroll Lynch as David Dellinger, leader of the National Mobilization Committee to End War in Vietnam (MOBE) round up the cast as other defendants.

Chicago 7 is aiming high as three Supporting Actor nominations is the most any film has earned in a single category. Multiple films have managed to score three nominations for supporting actor, including On The Waterfront (1954), Tom Jones (1963), The Godfather (1972) and The Godfather II (1974). This feat has not been achieved by any other film in over three and half decades, i.e. since the mid-70s. Past Best Picture winner Spotlight (2015) earned two Supporting Actor nominations for Mark Ruffalo and Rachel McAdams, neither of the two actors won the award.

The Trial Of The Chicago 7 (2020) is currently streaming on Netflix. It was released in select theatres before going wide on October 16th.