Where to Watch White Noise (2022): We’ve missed Noah Baumbach meddling with the bitter conundrums of the mundane and coming out with a fascinating take on the same. The Academy Award-nominated filmmaker’s Marriage Story provided an intricate study of a drowning marriage and its last gasps. And Adam Driver is clearly not done playing the husband in Baumbach’s sociopsychological escapades. Teaming up once again after the massive success of Marriage Story, the actor-director duo has brought Don DeLillo’s 1985 novel White Noise to the screens.

The novel was considered unadaptable for quite a while despite several filmmakers trying to take it up. In 2004, The Addams Family director Barry Sonnenfeld decided to make it into a film, and then in 2016, the same was attempted by Hamlet director Michael Almereyda. Finally, in 2021, Noah Baumbach took it upon himself to do the undoable and adapt the unfilmable. This will be Baumbach’s first film to not follow his original story. 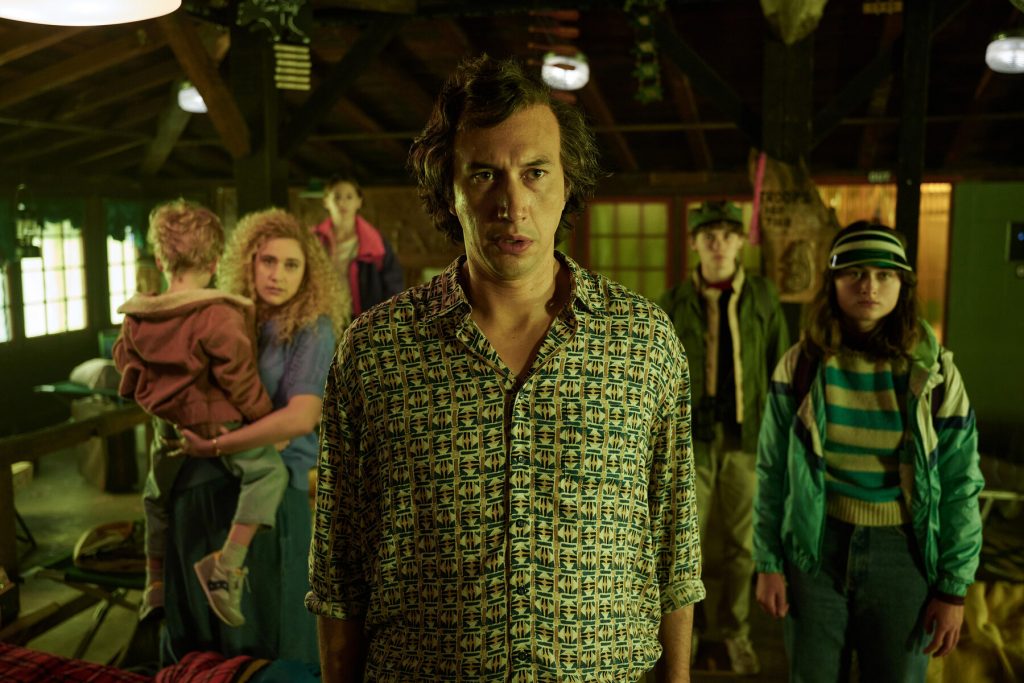 The absurd comedy finds an odd but brilliant professor of “Hitler studies” blowing the minds of his students at the fictional College-on-the-hill. Professor Jack Gladney’s life outside of his academics is crawling with day-to-day insecurities and his pill-popping wife who shows early signs of dementia isn’t doing much better. Jack Gladney may be incredible in his bizarre academic endeavors but he soon finds out his inability to be helpful in real-life crises when an accident causes an airborne toxic event. Stuck in an emergency evacuation with their four kids, the strange couple realizes just how unprepared they are to handle something of that magnitude.

The trailer manifesting the blunders to come the professor’s way, has his wife Babette reassuring him that as long as the family is together, they’ll be fine. The apocalyptic atmosphere, however, seems to have something else planned for the couple and their kids. With a toxic cloud hovering over them, the kids inspect the reactions they see in other cars to try and figure out just how scared they should be.

One of the best, if not the very best actor of this generation, as acknowledged by Martin Scorsese himself; Adam Driver has done quite a job transforming himself to play the professor with a receding hairline and a potbelly. For the role of the neurotic mother Babette, Baumbach has trusted his partner Greta Gerwig. Aside from receiving immense applause and a number of major award nominations for her performances in the likes of Frances Ha and Greenberg, Gerwig has also proven herself to be quite a skilled director with her own two films Lady Bird and Little Women, both of which received Academy Award nominations.

To play Jack’s colleague Professor Murray Siskind we have the fabulous Don Cheadle. The children will be played by Sam Nivola, May Nivola, twins Henry and Deane Moore, and The Killing Of A Sacred Deer star Raffey Cassidy.

Where to watch and stream White Noise Online:

The apocalyptic dark comedy has made quite a buzz after its premiere at the 79th Venice International Film Festival. With mostly positive critic reviews, White noise currently stands at a whopping 74% on Rotten Tomatoes. Netflix will release the film in US theatres on November 25, 2022. Head over to Fandango to look for theatre listings near you.

For those of you waiting to watch it online, White Noise will be available for streaming on Netflix from December 30, 2022.

Related: Here’s Where To Watch And Stream Daniel Craig’s ‘Glass Onion: A Knives Out Mystery’ Online

Here’s Where to Watch and Stream Daniel Craig’s 'Glass Onion: A Knives Out Mystery' Online