Watch Violent Night Online: If you’re not one for your Christmas holidays to be taken over by Hallmark feel-good Christmas movies or Netflix’s snowy rom-coms, the dark take on the Holy day that Violent Night comes with might just be what you need. Stranger Thing’s David Harbour is to conjure up a side of everyone’s beloved Saint Nicholas that has been long overdue. Violent Night will have Santa save Christmas, but his methods aren’t as jolly as you would think. The title is clearly a play on the jolly-ol’ carol Silent Night and a warning of what’s coming in this horror-action-comedy.

Norwegian director Tommy Wirkola is bringing the original screenplay by Pat Casey and Josh Miller to the big screen with the help of 87North Productions. Wirkola has proven his mastery in blending elements of horror with bloodshed and comedy, and that too in his familiar setting of Norway.

His directorial debut Kill Buljo parodies the Tarantino classic Kill Bill. Wirkola’s 2009 horror comedy Dead Snow had a group of students fighting Nazi zombies in the mountains of Norway. Viewers with somber tastes are excited to see how Wirkola’s dark and sarcastic style plays into the themes of Christmas. 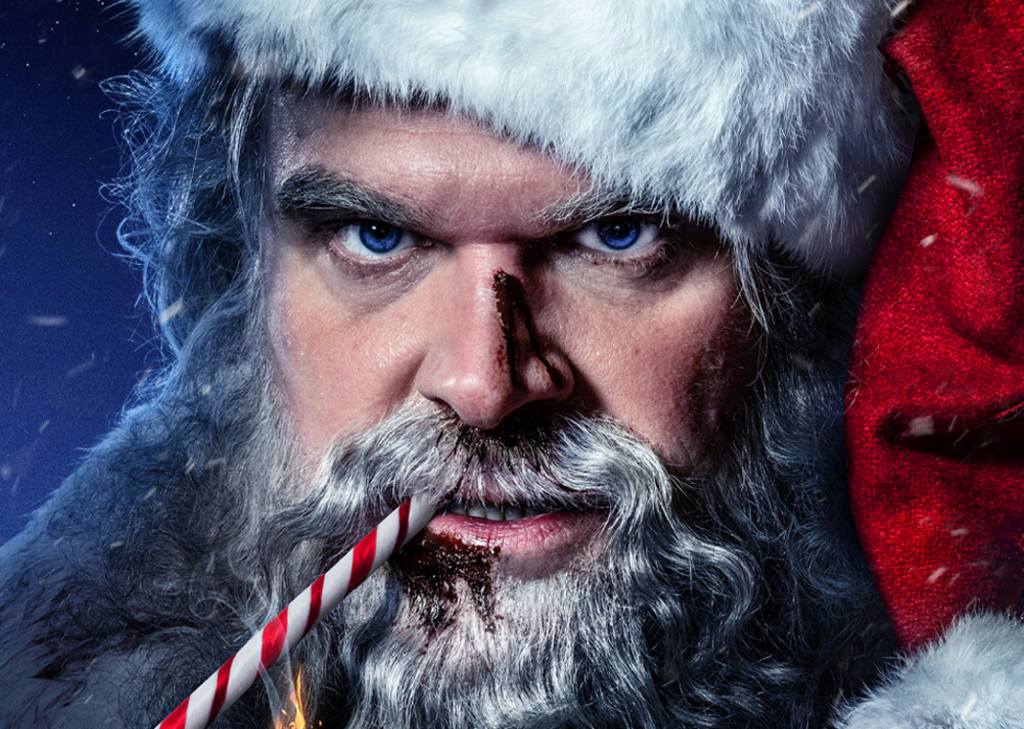 Does Santa plan it? Probably not. He was just on his merry way to bring gifts to the wealthy family. But what’s Santa to do when he finds out that the family has been taken hostage in their lavish mansion by mercenaries? While the thieves are unaware that Mr. Claus himself is on his way to punishing them for not being nice, Santa has to figure out a way to keep the cheer up while whooping some mercenary ass. At CinemaCon, David Harbour couldn’t help but drop a few F-bombs while talking about just how crazy the story is. Harbour’s description of his dark Santa had him saying, f***ing Santa Claus,” who swings a “motherf***ing hammer.”

If you were expecting a regular guy in a Santa costume, the trailer clears your misconception the moment he is manifested right out of the sparks that form near the chimney. He does stop to eat a cookie before he proceeds to beat the hell out of the people on his naughty list. A Christmas ornament going right into a mercenary’s eye sure does set the mood for some body horror in the mix.

Breaking the sweet fatherly Hopper image he acquired from Stranger Things, David Harbour stars as the badass Saint Nicholas himself. A Krampus-y Santa may not be something brand new to be explored in films, but Harbour’s Santa crosses the violence meter in a way that no other Santa has crossed before. John Leguizamo joins him as a mercenary greedy for the $300 million that the family has in their vault. Leguizamo has been remarkable in his roles in TV’s Bloodline and his role as Luigi in Super Mario Bros.

Where to watch and stream Violent Night online

After its world premiere at the New York Comic Con in October, Universal Pictures released Violent Night in theatres internationally on December 2nd, 2022. It opened with a bang at the sleepy box office. Head over to fandango to check for listings near you.

As for online streaming, there hasn’t been any official announcement as to when Violent Night will be available on streaming platforms or for Video On Demand purchases. But if the film follows the pattern of the other films released by the same distributor, Violent Night is likely to land on Peacock’s streaming platform. Even if that happens, it will be a while before you can stream it online. Keep an eye on this space to find out more updates on the same.

Related: Here’s Where To Watch And Stream Will Smith’s New Movie, Emancipation Online

Scrooge Megaways And More Top Slots To Play at Christmas