Watch Devotion (2022) Online: Cinema has been fascinated with war and its effects since we can remember. It has only been about a decade though that war movies have started taking a look at the forgotten, lesser-known heroes immersed in hellish violence and emotional turmoil. J. D. Dillard’s war biopic Devotion will be telling the stories of two such heroes, Jesse Brown and Tom Hudner, whose friendship survived and flourished in the middle of the Korean war.

Cinemagoers have had their share of soaring with the fighter pilots this year with Top Gun: Maverick and Tom Cruise’s undeniable intrigue. But what Devotion is bringing to the table, if they do choose to focus on making it character-driven, will be something very different than a film that completely relies on the adrenaline rush of flawless air stunts. From the looks of it, based on the 2015 book by Adam Makos, Devotion: An Epic Story of Heroism, Friendship, and Sacrifice, Dillard will be bringing a lot more to the stories of the two celebrated pilots as he feels a personal connection to it.

Dillard’s father was the only black man that served in the Navy with a predominantly white community of aviators. Finding a deeper sense of empathy in his father’s stories that Dillard feels are not too different from what Jesse Brown had felt, has brought the director a more authentic understanding of the feeling of isolation. Dillard’s father has also worked as a technical advisor for the film. 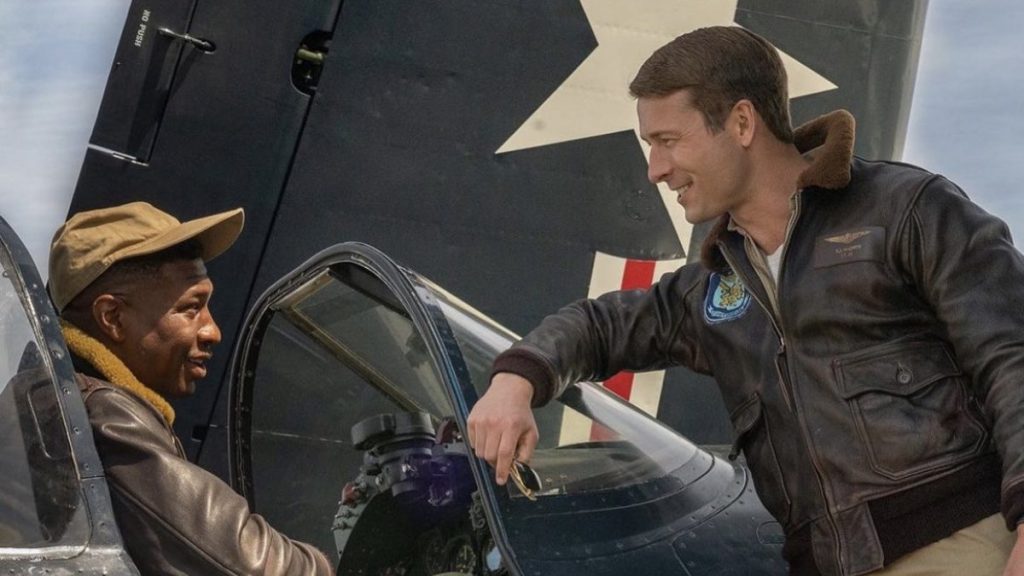 Devotion is a story of perseverance and bonding between two elite fighter pilots Jesse Brown and Tom Hudner. The white lieutenant and the Navy’s first black carrier pilot become the U.S. Navy’s most celebrated wingmen with their heroic sacrifices and their determination to fight through.

The air sequences in the trailer look a bit too much like Top Gun: Maverick can be chalked up to the same aerial stunt coordinator Kevin LaRosa working in both movies. A closer look at the celebrated pilot’s story shows Jesse Brown shooting down racial discrimination with as much determination as he flies with. We see the friends meeting and bonding until it leads up to the two becoming wingmen with one mission–bringing everyone home.

To play the two leads, two of the most promising up-and-comers of Hollywood join the cast of Devotion. Jesse Brown will be played by Jonathan Majors. Majors’ career has seen a huge boom in recent years with him starring in Spike Lee’s war drama Da 5 Bloods, Tv’s Lovecraft Country, and landing the role of Marvel’s Kang the conqueror. Not a new name in aviation films, Glen Powell will be playing the role of Tom Hudner right after his Top Gun: Maverick’s Hangman.

The rest of the cast consists of Joe Jonas of the Jonas brothers, Christina Jackson, Thomas Sadoski, and Serinda Swan.

Where To Watch And Stream Devotion Online?

You can now stream Devotion on Pramount+ or Rent/Buy it on Digital via Paramount’s digital service.

Related: Here’s Where To Watch And Stream Steven Spielberg’s ‘The Fabelmans’ Online