‘Grandiose, epic propaganda’ is the word often comes to mind when film-makers try to portray the horrors of war experienced by their soldiers and civilians, in the hands of the invaded country. Those stylized and romanticized images of persecution raise ethical and aesthetic issues about ways of fully comprehending the man-made horror. Then there are less bombastic anti-war films, which rather than eulogizing the human sacrifices, unflinchingly presents the decimation (staying closer to historical truth).

Finally, there are war movies that profoundly deal with Joseph Conrad’s famous, enigmatic words “The horror! The horror!” These films neither glorify men of war nor stay historically accurate. The emphasis would be on the psychological impact of the war on an individual. Andrei Tarkovsky’s exemplary feature-film debut “Ivan’s Childhood” (1962) belongs to the final category of war drama, where the layers of psychological distress felt by 12-year-old Ivan makes us feel empty and lost, just like Ivan himself.

Historical perceptions are pushed to a secondary position to attain deeper meaning through the characters’ emotional reaction. Of course, the profoundness of “Ivan’s Childhood” couldn’t be easily created, since, in the hands of a lesser director, such films could be turned into a narcissistic exercise on wartime survival. Only one other film I think could stand closer (or a companion piece) to Tarkovsky’s film in presenting the traumatic realities of war (although the use of subjective camerawork by the film-makers imbues different perceptions upon viewers). It is Soviet Union filmmaker Elem Klimov’s emotionally scarring “Come and See” (‘Idi i smotri’, 1985). 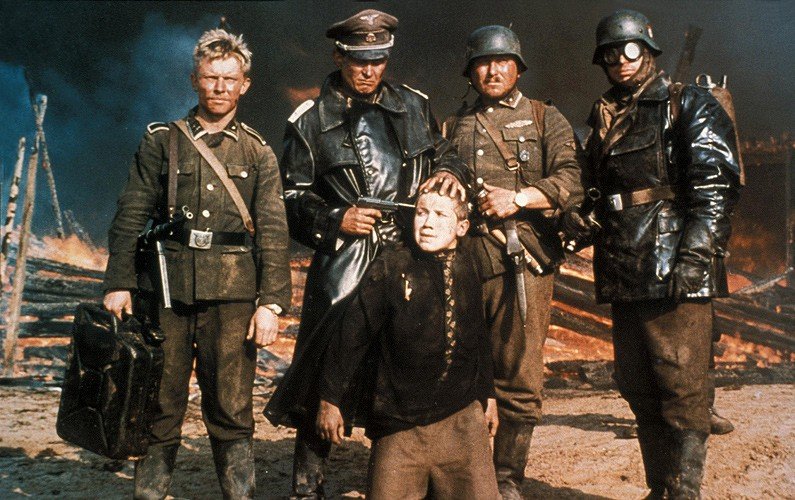 “Come and See” was made from a country, which often depicted the ‘Great Patriotic War’ with an abundance of joy and romanticism. It hailed from a nation, where not too long before, dissenters were thrown into jail and controversial movies shelved. Former Soviet Statesman Gorbachev’s move towards reformation (known as ‘glasnost era’) made this film possible.

In fact, after witnessing the images of human suffering in “Come and See”, I think no other film-making industry around the world would we ready to present such harrowing material. The film’s end title states that 628 Byelorussian villages were burned down with its inhabitants during Nazi’s invasion of Byelorussia, around 1943.

But, Elem Klimov’s movie isn’t the literal recreation of this particular gruesome, historical event. Klimov also sheds away the ambiguity of Tarkovsky and goes for a more heavy-handed approach. But “Come and See” isn’t a historical/war drama as written about in encyclopedias or showcased in history museums. Beneath the shockingly realistic style of film-making, Klimov’s frames are riddled with symbolism, heightened surrealism and even montages. It certainly depicts something that happened for real, but the director brings his own singular vision to this recreation; one that is steeped in irony.

The film opens with teenage boy Florya Gaishun (Aleksei Karvchenko) and a kid hiding from a village elder (Florya’s uncle), who warns the boys to not dig or look for weapons. The kid mimics the voice of village elder, in an attempt to mock this local authoritative figure. Why? Because the boys want to find weapons to be a part of higher authority: anti-fascists partisans. Florya digs and finds a rifle. Florya’s constricted view hopes for warfare and sees it as an opportunity to be a war hero.

The innocent, naive boy leaves behind his mother and twin sisters to gleefully join the partisan forces. Florya is taken to forces’ base of operations, made-up deep into the woods. To his dismay, Florya is left behind by commander Kosach to look after the camp, along with Kosach’s young, beautiful lover Glasha (Olga Mironova). They share the grief of being left behind and later share little, playful moments. Of course, the chance of a romance between them is rapidly extinguished as German paratroopers fly down, after annihilating the forest with heavy artillery.

Florya, nearly deafened by the crashing sounds of artillery rounds, barely escapes with Glasha to his village. The village is eerily quiet, although Florya finds warm stew in his abandoned house. The twin sisters’ dolls are scattered on the ground and a foreboding feeling embraces both of them. Florya declares he knows where his family and village members are and runs out.

Glasha follows him down the muddy path, while suddenly glancing back towards the village. She sees a pile of corpses stacked beside a house. Florya’s childhood paradise is lost forever and he goes through horror upon horror. Shock and despair kill the innocence in his face. He is traumatized by witnessing his burned uncle repeating the words:

“I told you not to dig….dig……” Florya, the least capable to survive the atrocities, ironically sees and hears everything: from the screaming cacophony of bombing runs to the screaming voice of civilians locked inside the burning Church. 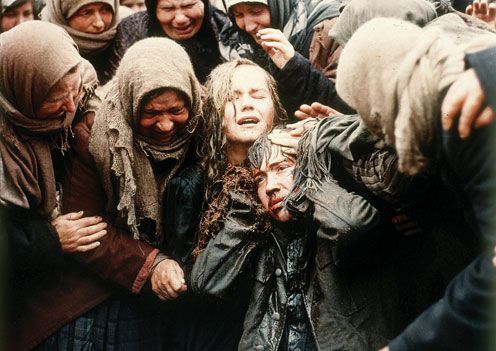 Director Klimov uses both the subjective lens as well as a detached vantage point (camerawork by Alexei Rodionov). The subjective view of Klimov isn’t just used to convey the psychological state of Florya, but also to generate an empathetic perception on the viewers’ mind, extracting greater impact from visuals and emotions.

When artillery flows down, the explosive sounds are gradually replaced with the ringing sound, putting us in Florya’s sense of bewilderment and to share his deafness. At other times, the subjective viewpoints are designed to intensify the blow of emotions or visuals.

For example, when Florya before encountering his burned uncle, the eye-level camera moves through the crowd of crying villagers, enhancing Florya’s & ours’ feelings of claustrophobia to suddenly reveal the shocking image.

An objective viewpoint of the same situation would disturb or disorient us too, but in employing this particular technique, Klimov tries to single-mindedly simulate the physical sensations of fear and anxiety in the viewers as deeply felt by the unwilling, forced witness Florya. The same subjective technique is used in the final, Church scene when the distressing atmosphere is observed from the viewpoint of the masses. Suddenly, the inevitability of situation dawns upon us, condemning our emotions to be trapped alongside the masses.

Director Klimov does often switch over to an objective point of view when we observe things that Florya couldn’t see. It happens in the birch forest scene when Glasha joyously dances and as they both dash through trees.

There are also hints of disconnected objective viewpoint, especially when the attacks are underway. Terrence Malick’s stupendous war film “Thin Red Line” excellently uses multiple subjective experiences during the battle sequences to contemplate on the idea of self, alongside a brutal war (the highly triggered subjective shots, but a less meditative approach was used by Inarritu in “The Revenant”).

Klimov doesn’t quite create the ‘you-are-there’ perspective during bouts of attacks or when Florya runs for survival (there’s a detached sense when Florya runs through the marsh, to hint at his madness, and also in the ‘field attack’ scene). However, when there is a requirement for viewers to share a deep emotional connection with human suffering, Klimov sheds away the vantage point. 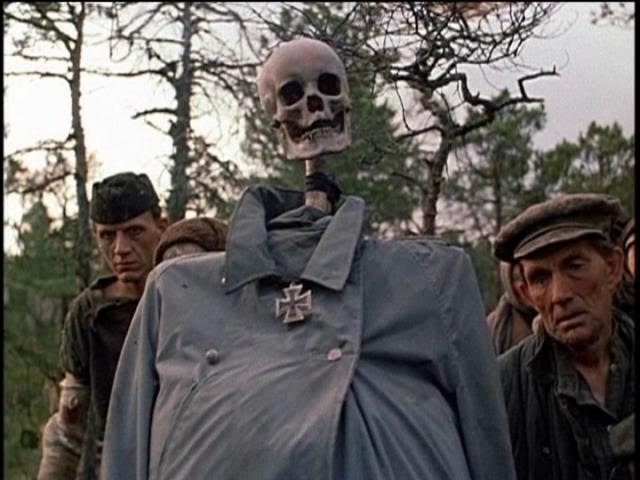 Mr Graham Fuller in his essay about this film’s visual techniques (written for ‘Reverse Shot’) calls the recurrent close-ups of Glasha and Florya as ‘hyper-real’. The writer says Klimov was inspired by iconic paintings of martyred Russian saints to create these shots, where the backgrounds are out-of-focus, replaced by a radiant light.

The impact of the horrors on Florya’s psyche is reflected in those shots of traumatized face. Like the desecrated land of Byleorussia, Florya’s face too degrades rapidly, pushing him to a zombie-like state with waves of creases appearing on his forehead. The close-up shots make us involuntarily gaze at a face that bears all brutalities of war and the woes of his entire nation.

The idea that “Come and See” is not a straight narration of history is pretty evident in the massacre scene. There’s lot of truth in the scene, but at the same time, Klimov exaggerates the reality (not by exploiting) to attain full comprehension of the horror. As a result, the Nazi Germans are portrayed as savages, incapable of any human feelings. This particular sequence has brought up the label ‘propaganda’ and this label is often used whenever a Russian political film is talked about.

Yes, the exaggerated portrayal of Germans does seem slightly propagandist, but it doesn’t mean that the atrocities we witnessed are also a heightened portrayal of true events (read about Khatyn & Navahrudak massacres – few of the many such genocidal acts in Belarus. Also, in a 2001 interview Klimov calls his film ‘a lightened-version of truth’). And, unlike many Soviet Union war dramas, “Come and See” never strives to be a shining memorial of Russia’s hard-won victory; it stands alone bearing the horrendous scars of war in general.

Movies like Spielberg’s “Saving Private Ryan” marvellously showcased the gritty realism of the battlefield, but it was diffused with more palatable themes and messages. But, Klimov’s movie asks hard-to-digest moral questions on the faceless destruction of war which turns humans into order-following beasts.

At last, Florya shoots at the portrait of Hitler, lying on mud and with every bullet shot, the reversed footage of Hitler’s life is played. Each bullet shot conveys the largeness of the horror we endured. It also powerfully relates an individual’s horrific experience to that larger evil. When Florya keeps on shooting at Hitler’s historical effigies, Hitler’s picture as a baby placed. Now, Florya doesn’t shoot at that imaginative picture.

Does it mean Florya refuses to participate in the cycle of atrocities? Is there any hope for him (and his species), since he chooses being ‘human’ rather than withholding desire to annihilate everything? Maybe there is a concealed optimism in that ending, but I only felt ambiguity.

“Come and See” (136 minutes) is a brilliantly crafted, traumatizing work of cinema. Its baleful imagery and the protagonist’s agonized face is something that would come to your mind, whenever the evils of war are discussed.

Hush [2016] Netflix Review: The deaf mouse Vs The wounded cat!