Human mind is often haunted by this age-old question and requests for an answer through prayers or while talking to high priests. The question is: Why do bad things happen to good people? We try our best to be good. We show love to others & yearn for others’ love. We do our jobs & duties, hoping for some recognition from our peers. But, still bad things happen to us. Our beliefs are shattered; frustration & emotional pain surges; uncertainty confounds us. If you are religious, you want to know if God has any control over this world or if the ‘bad things’ just a series of tests to challenge our faith? Even if you are not religious person, you still want to make sense of life. He/she definitely wants to know if there is any greater purpose for human beings in this ever-expanding cosmos. May be one thing is certain in this world or our life: It is impossible to understand things – things that advance from the past devouring into future. Coen Brothers’ under-rated fable “A Serious Man” deals with these existential themes. What if our existence has no ultimate purpose? What if we look back at our lives and only see a meaningless void? The Coens’ original script, based on the timeless story of Job, asks these questions on life’s big issues. But, contrary to its title & themes “A Serious Man” doesn’t remain only as thought-provoking film. It is funny too. As Mr. Roger Ebert perfectly states “This isn’t a laugh-laugh movie, but a wince-wince movie. Those can be funny too.” 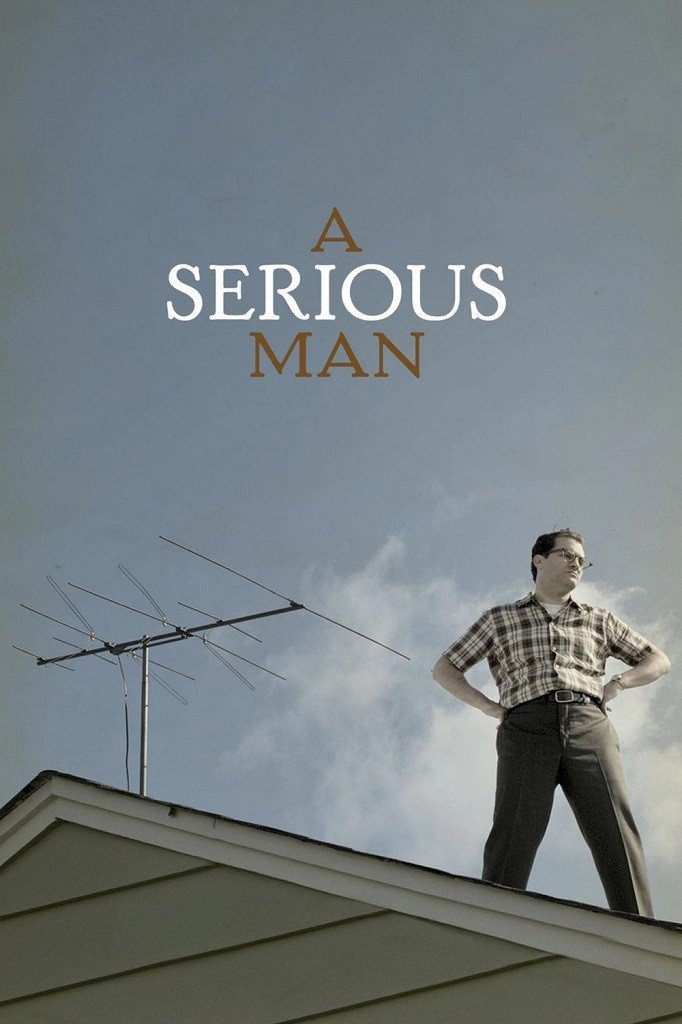 The movie is set in a Minneapolis Suburban neighborhood in the late 1960’s. The majority of characters are Jewish, living in a predominantly protestant region. The protagonist is an ordinary, well-meaning, middle-aged family man & physical professor Larry Gopnik (Michael Stuhlbarg). The film observes two weeks of life in which time his personal as well as professional life takes grim and unpredictable turns. Larry’s wife Judith (Sari Lennick) wants to ‘gett’ (ritual divorce) to marry the oleaginous friend Sy Ableman (Fred Melamed). His son Danny (Aaron Wolff) who’s about to be take his bar mitzvah (Jewish coming-of-age ceremony) is so busy getting stoned. Larry’s daughter (Jessica McManus) often washes her hair, goes with friends to ‘The Hole’, sneaks some money from her father’s wallet and saves up the money to get a ‘nose job’. Larry’s unemployed, lonely elder brother Arthur (Richard Kind) lives with him, often sitting at their living room sofa, working on ‘Mentaculus’, which is alleged to be the probability map for the course of entire universe. Larry is also up for his tenure review.

The first of events that throws Larry’s life out of balance begins with the appearance of Korean student Clive (David Kang). He tries to bribe Larry to give him a passing grade, so as to keep his scholarship. Then comes Larry’s wife’ demand for ritual divorce. Larry’s home is wedged between the house of a strict, bigoted redneck, who wants to build a boat garage near Larry’s property and on the other side resides a highly sexualized housewife (Amy Landecker), who takes nude sunbaths in her yard. Artur’s behavior degenerates, anonymous letters are sent to tenure committee to besmirch Larry’s name, and more troubles follow. As they say ‘when it rains, it pours’. A friend advises Larry to meet a Rabbi [“We’re Jews, we have that well of tradition to draw on, to help understand. When we’re puzzled, we have all the stories that have been handed down from people to people” says the friend). He goes to see a Rabbi (in fact Rabbis) but what he is handed down is more puzzles and uncertainties. One small character in the film says “accept the mystery”, but like all of us, what Larry desires is definite answer on all the threatening developments. 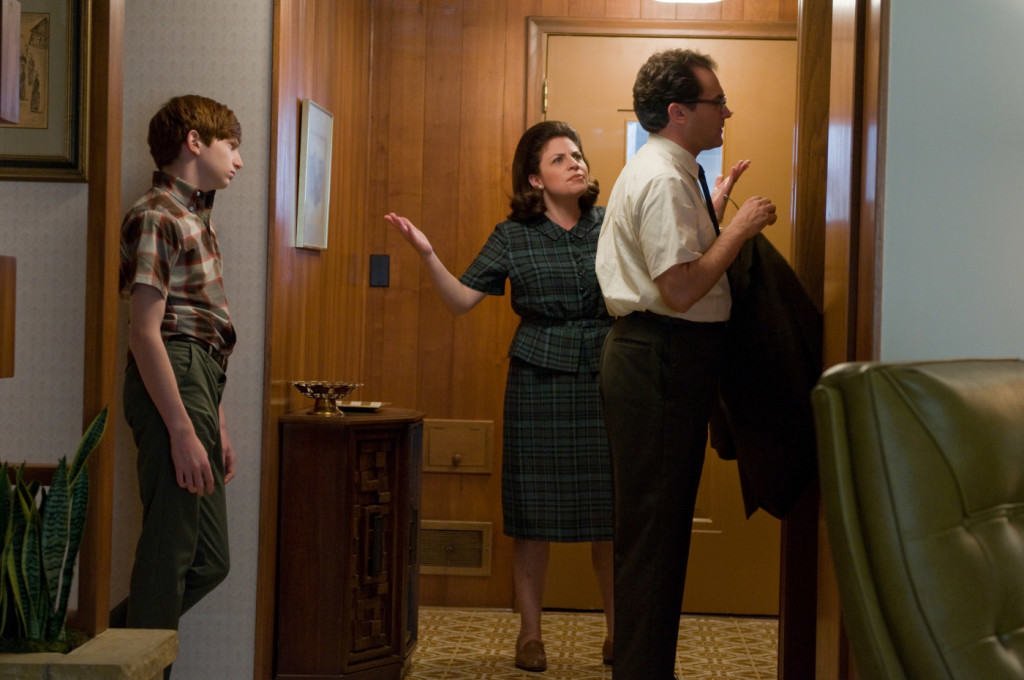 Directors/writers Ethan & Joel Coen sets up their themes in style with a peculiar prologue set in a 19th century East European shtetl (small Jewish village). “Accept with simplicity everything that happens to you” says the Hebrew proverb at the start of tale. A husband and wife have a disagreement over the arrival of an old acquaintance. The wife calls the older man a dybbuk (a malevolent spirit) and the ensuing argument results in the stabbing of old man. Is he really a dybbuk? Was the family cursed? It’s uncertain. He may or may not be a ghost. Since Larry’s evokes the Schrodinger’s cat, we can say ‘the old man is both a ghost and not a ghost’. Later, the uncertainty principle, Mentaculus and many other little threads in the plot hinges upon this uncertainty or inscrutability. Larry’s chief philosophy in life: ‘Actions have consequences’. He bewilderingly repeats, ‘I didn’t do anything’ when all the bad events befalls him. From a religious as well as scientific viewpoint, Larry is dumbfounded on why these things are happening to strict moral and ethical man like him. Of course, as a human being he can’t accept all these with simplicity. Like all of us, Larry wants to know why he is so beaten down with problems, when everyone else gets away by doing whatever they want. And, the beauty of the script is that this uncertainty is merely included in the construction of Larry’s problems. It occurs in the characterization and character decisions or actions as well. Why the children are so detached from Larry? What made Arthur to be this lonely wreck? Why does the Korean student (through his father) threaten Larry with defamation suit, while he also wants a passing grade? Why Rabbi Marshak recites the lines of Jefferson Airplane, when Danny meets him after bar mitzvah? Why Rabbi Nachtner told the story of Jewish dentist and a goy? Why Larry had an accident at the same time as Sy Ableman had his? How the stoned Danny perfectly recited the Torah? With more contemplation on the tale, we could come up with lot of whys, which aren’t directly related to Larry’s bizarre experiences.

Although “A Serious Man” tells a specific Jewish crisis of faith, it unfurls in a universe that is at some levels relatable. As Rabbi Nachtner states “you can know Kabbalah inside out and still struggle with these mysteries”, Coen brothers themselves acts like a supreme power, giving us many mysteries, for which there are different perceptions, but no definite answers. It is easy to look through the film’s artifice or stereotypical characters, but the directors perfectly balances the nihilism & absurdism in the plot (as in “Fargo”, “Barton Fink”, etc) that we are able to nastily laugh at the bad luck descending upon Larry as well as concerned about his personal struggles & looming mysteries. 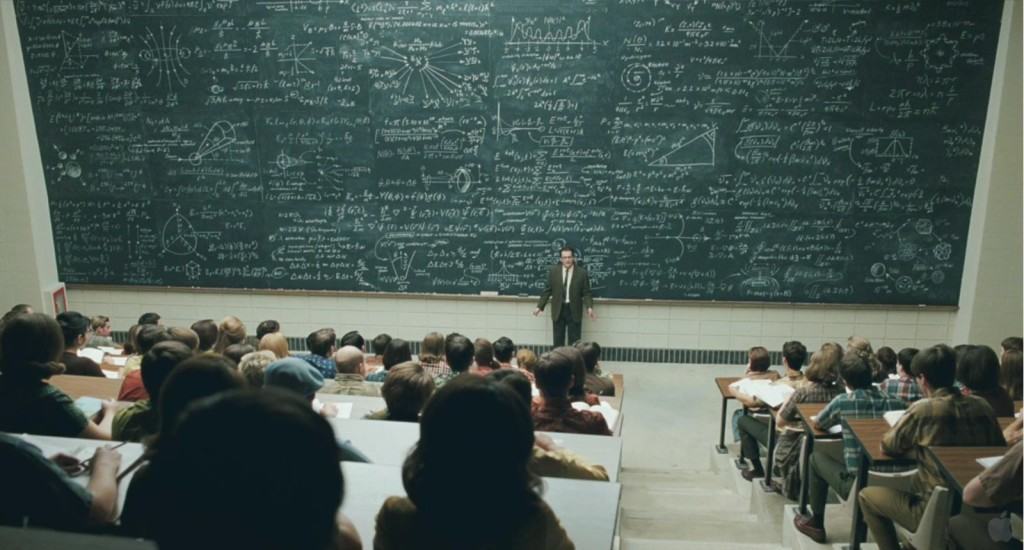 As in “Blood Simple”, “No Country for Old men” or “Inside Llewyn Davis”, Coen Brothers uniquely entrenches their story on a time and place, profoundly showcasing the historical and cultural truths (maybe little exaggerated version of truth). In “Serious Man”, they flawlessly evoke the flattened houses and treeless yards of 60’s suburban neighborhood. Although the plot developments aren’t autobiographical, the setting is from the brothers’ own childhood universe. So, the little details they add to the environment and characters lend enough weight to the film’s farcical side. But, why does the film have to be set in the 60’s? To include the ‘new freedom’ thing? Or to just infuse the auto-biographical perspective? Again, it’s uncertain for me. But, what I think is that the 60’s setting is a twisted joke from the part of directors, reiterating the Rabbi’s wise words. That everything has passed on and it all amounted to nothing. If all the little & big elements of uncertainty faced by Larry states that ‘God’s playing with us’ (or to state sharply ‘God’s just fucking with us’) the same statement stands true for Coen Brothers’ too, especially in the way they posit questions with no explanation.

A Serious Man wouldn’t have imbued the contemplative & humorous if not for pitch-perfect direction and flawless performances. It is true that the original script is dense and drenched in irony as if in a novel. But, the film’s rambling & unique episodes could have been easily transformed into painful ones to watch without the brothers’ acute sense of staging. Take the story of goy and dentist. It is a divergence that gives a great feel to the story, but one which adds nothing to Larry’s struggles. The staging of mordant humor in the scene plus the deadpan performance of the unknown actors makes it one of the most hysterically funny sequences in Coens’ oeuvre. The directors’ choice of aesthetics at times passes on the alienated feeling of Larry, but they are also smart enough to keep us in a detached state, so as to not make the film into a very serious one. So, this exploration of faith, mysteries and uncertainty in life remains as both nuanced and funny. Michael Stuhlbarg as Larry Gopnik holds together the film’s weighty themes. With his suffering he makes us feel sad and anxious, but he also has the power to showcase the characters’ pain, humiliation in a funnier perspective. It doesn’t mean that we are laughing at him. We are (secretly) laughing with him as we usually do at times, when all we encounter in life is exasperation and failures.

“A Serious Man” (105 minutes) is a bracingly original work of Coen Brothers that holds up a mirror to contemplate on our own existence and our desire to find greater purpose in life. Its perspective, mysteries and characters are not easy to shake off from our memory.