In the span of a decade, director Mike Flanagan has established himself as one of the finest horror masters working in the American film industry today. In addition to his directorial duties, Mike Flanagan also writes & edits his movies but what has bolstered his rise over the years is the consistency & simultaneous improvement in the quality of his works. A prolific filmmaker, Flanagan has directed 7 feature films so far, in addition to a widely acclaimed Netflix miniseries, and all of them have only paved the way to his newfound legacy.

Flanagan made his first mark in 2011 with “Absentia”, a Kickstarter-funded horror project which he filmed in his own apartment on a shoestring budget. This low-budget indie horror earned both praise and several awards on the festival circuit, thus introducing him as a promising talent to look out for. For his next film, Flanagan decided to expand his earlier short film into a feature-length theatrical. A thrilling & mystifying story about a haunted mirror, Oculus was both a critical & commercial success and marked another forward step in his filmmaking journey.

The year 2016 presented him stepping up his game as he brought us not one, not two, but three feature films. Each a welcome entry in the world of horror. “Hush” was a fresh take on the slasher genre and despite the outlandish premise, it delivered the desired thrills. “Before I Wake” was an attempt to fuse horror & fantasy and as of today, it remains his only dud. But it was Flanagan’s third film of the year that took us by surprise; a vastly improved & surprisingly effective prequel to the critically-panned “Ouija”. And it was this turnaround that validated the belief that Flanagan understood horror better than most. 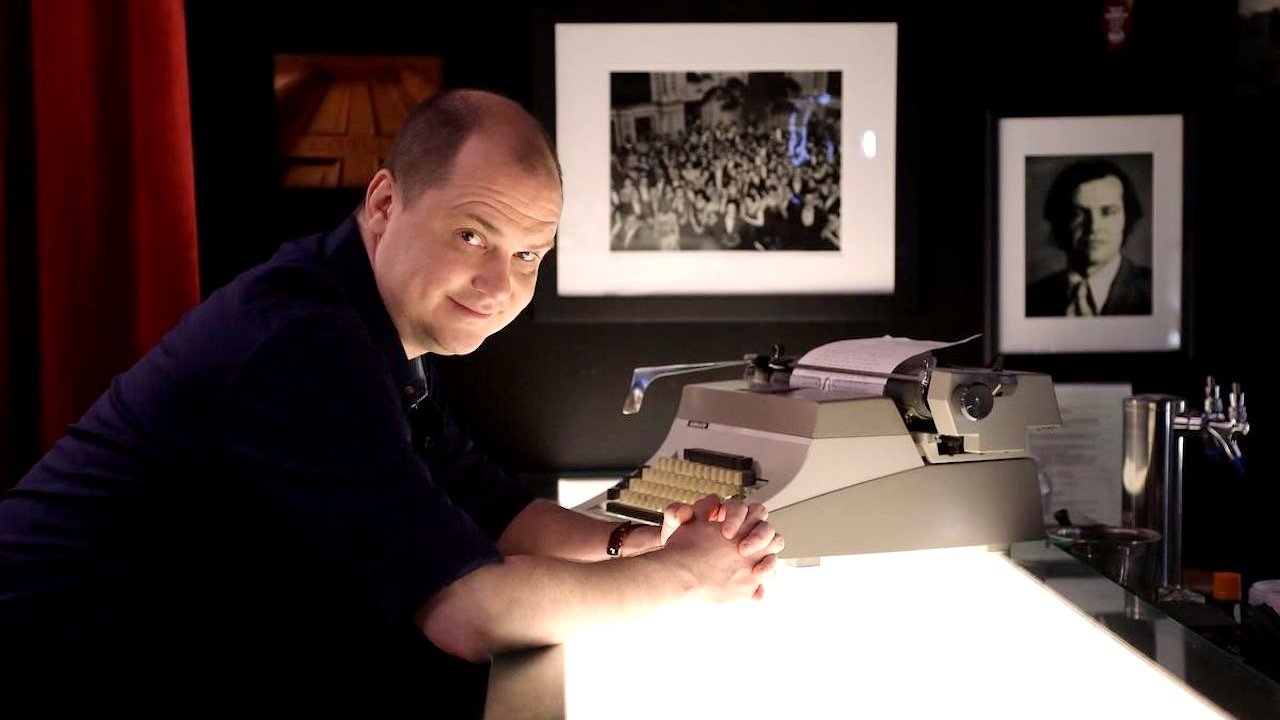 Next up was the psychological horror-thriller “Gerald’s Game”, an adaptation of Stephen King’s novel of the same name that was long thought to be unfilmable. Though the film had its share of shortcomings, it still managed to be tense & gripping for the most part. Afterward, Flanagan’s long association with Netflix led to his then-most ambitious project: “The Haunting of Hill House”. Revered by both critics & viewers on release, this horror miniseries was noted as much for its complexity as it was for the effective chills and made Flanagan a household name. And yet, nothing could have prepared the world for what he would do next.

Now it is an extremely bold & audacious move to follow into the footsteps of one of the most accomplished films of all time. And all the more foolhardy when it was helmed by one of the greatest filmmakers to have ever lived. Well-aware that Stanley Kubrick‘s The Shining is deeply ingrained in today’s pop culture and also familiar with Stephen King’s dislike for it, Flanagan walked a fine line between the works of both artists without losing his own ambitions and in the end defied every expectation. Doctor Sleep proved to be a worthy successor to Kubrick’s classic in addition to an impressive King adaptation and cemented Flanagan’s reputation as the horror genre’s foremost master today.

His films are known for their dread-filled aura and greater emphasis on atmosphere over jump scares. The latter isn’t entirely absent but unlike most horror entries of today, it doesn’t drive the horror aspects of the story, instead of working as a catalyst during key moments. Also noteworthy is the character-driven plot, for there is an actual attempt to flesh out the characters and their relationships so as to make us invest in their lives & predicaments. Add to it the strong production values, bold & timely themes, old-school approach & genuinely effective scares, and you’ve got a storyteller who knows what a good horror film is all about, plus his firm grip & surprising comfort with the genre elements never ceases to impress.

Having finished watching & reviewing his entire filmography, the following is my list of Mike Flanagan movies ranked from his least impressive directorial effort to his best picture. Let’s get started: 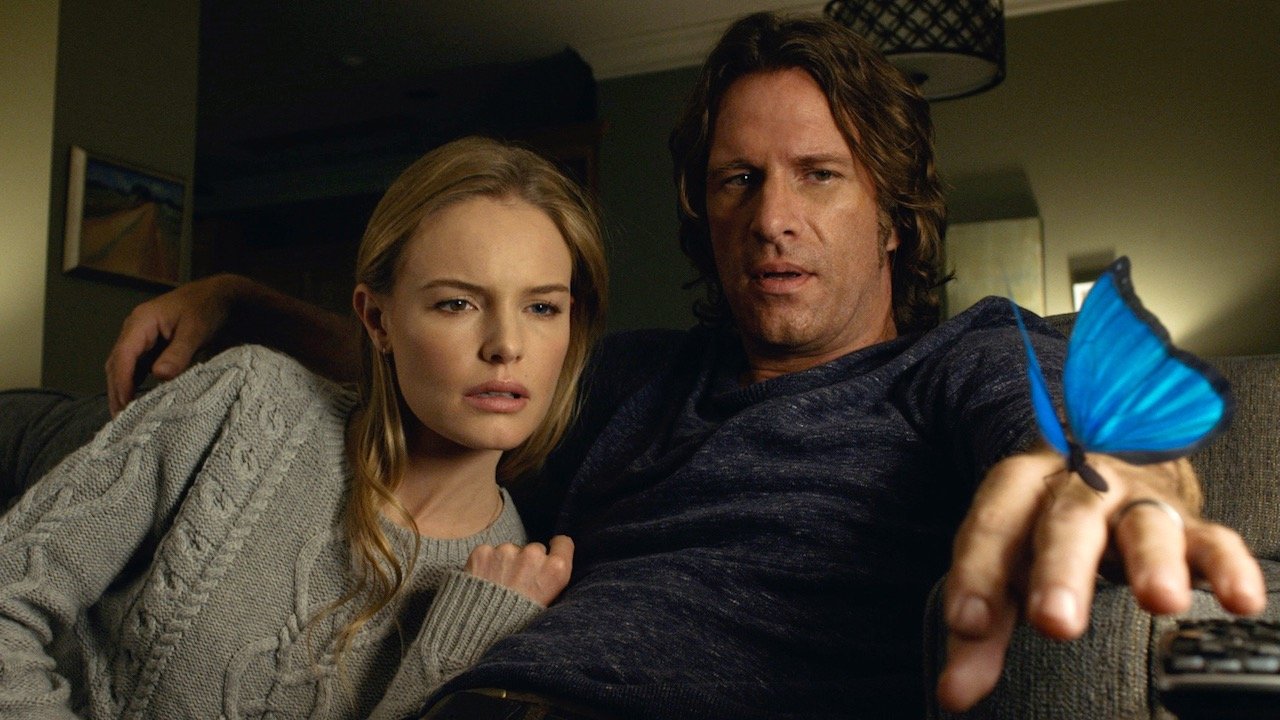 Also known as Somnia, the story concerns a grieving couple who welcome an orphaned child into their household and soon learn about his unique gift: His dreams manifest in reality as he sleeps. At first, they are overwhelmed by the wonderful delights of his imagination but it doesn’t take long for them to realize that his nightmares can be just as terrifying & horrific.

A dark fantasy horror addressing the themes of grief, loss & motherhood, there is no denying that the film features a premise that’s fascinating & promising yet the end product is mediocre & forgettable. Mike Flanagan operates from a safe distance, holds back when he needs to go all-in, and is unable to wrap the journey on a satisfying note, not to mention that the finale ends up being a tad too sappy & overlong. 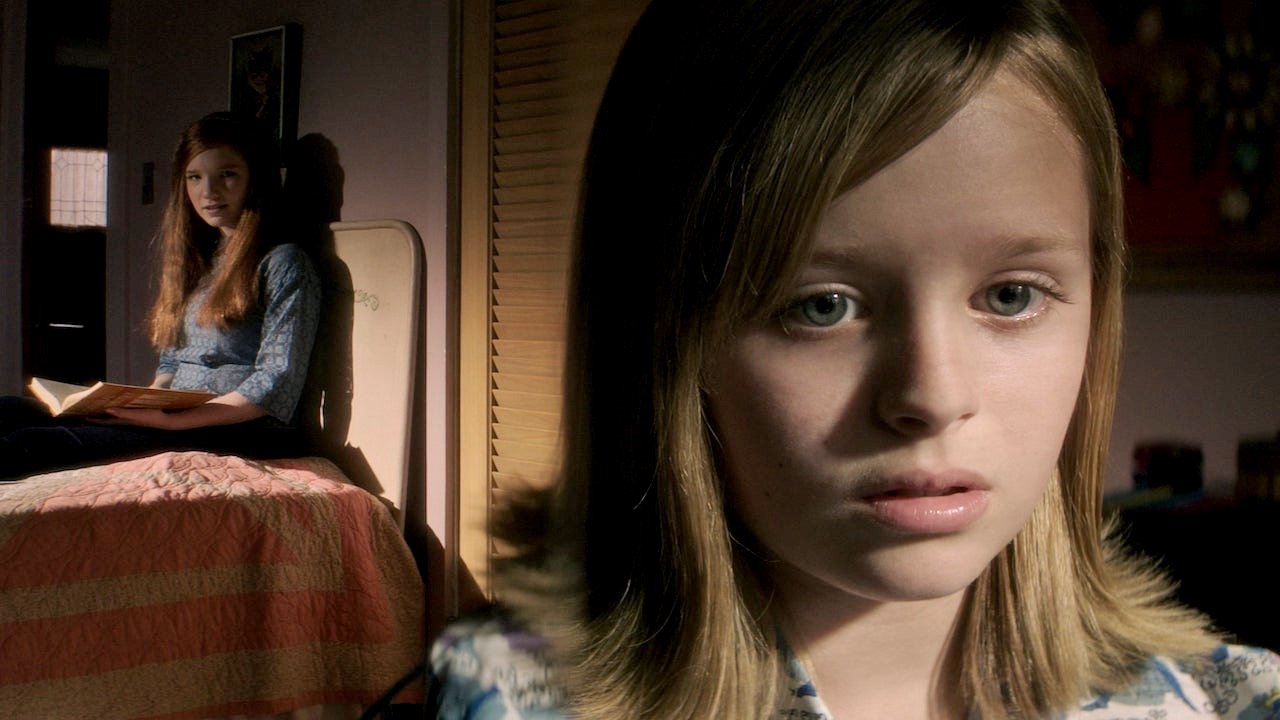 Discarding the contemporary setting of the first film and going back in time to the 1960s for its story, the prequel to Ouija (2014) follows a widow & her family who run a séance scam business in their suburban house. Things take a sinister turn when they incorporate an ouija board into their stunt and inadvertently invite an evil presence into their house.

Compared to its critically-massacred original, Ouija: Origin of Evil is a massive improvement in every imaginable way. It packs a welcome dose of fun & frights, makes excellent use of its vintage setting, and is structured in a way that delivers genuine thrills despite the predictable storyline. Flanagan’s direction is a definite standout here as he takes a simple story and gets maximum mileage out of it. 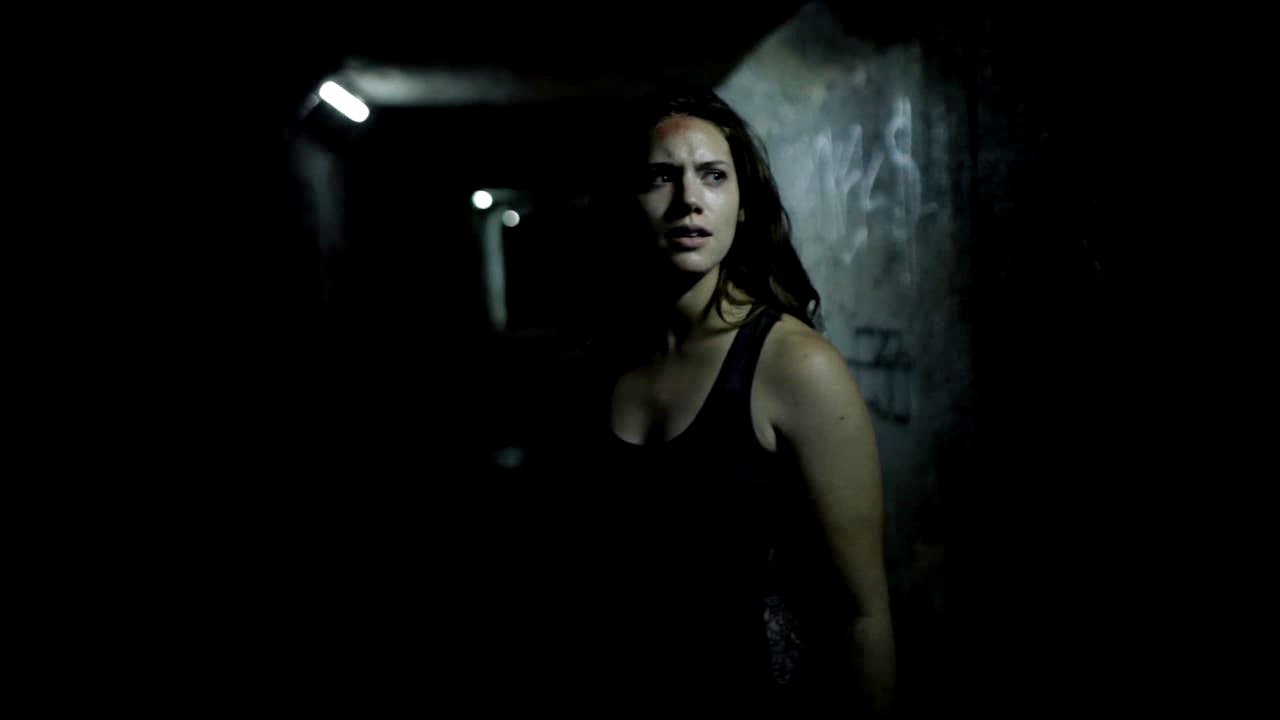 Absentia is about a pregnant woman whose husband mysteriously vanished 7 years ago. Grappling with her loss, she eventually decides to sift through the wreckage and move on with her life after her younger sister comes to live with her. However, an ominous tunnel near the house is soon found to be the link of several disappearances which in turn makes the siblings wonder if her husband’s presumed death might be anything but natural.

Shot on a shoestring budget, Mike Flanagan’s first feature makes for a gripping meditation on grief, loss & letting go, and comes imbued with a sense of unease that provides some effective scares. The film gradually sets up its foreboding atmosphere and provides sufficient room for the siblings’ relationship to develop but the stronger the first half does create anticipation which the next half fails to measure up to, thus leaving an underwhelming aftertaste in the end. 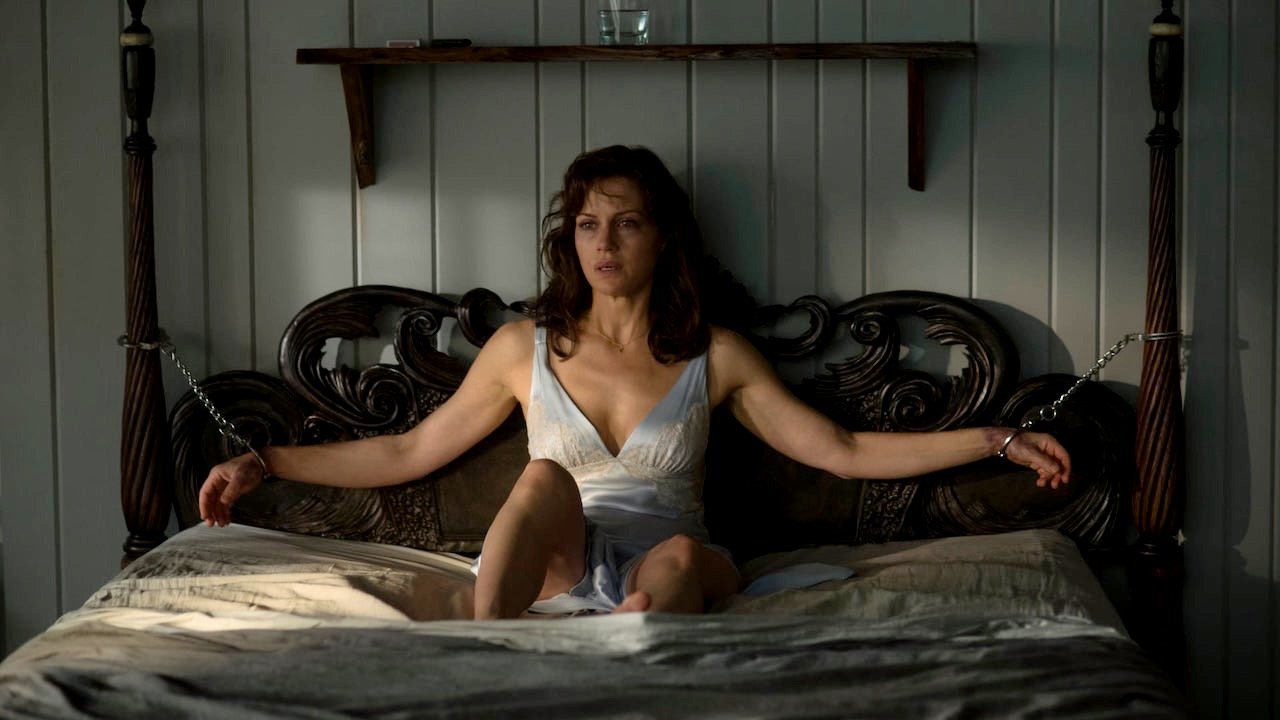 Marking Mike Flanagan’s first attempt at adapting a Stephen King novel, Gerald’s Game tells the story of a middle-aged couple who travel to their remote lake house to spice up their failing marriage. Things take a tragic turn when the husband unexpectedly dies in the middle of the sex act, leaving the wife handcuffed to their bed. With little hopes of rescue, she must find a way to set herself free.

The novel this film is based on was once thought to be unfilmable and in that regard, Flanagan’s attempt is admirable. Competently crafted & skillfully narrated, the film makes efficient & effective use of its available resources and is expertly steered by a career-best performance from Carla Gugino. However, it could have been an even leaner & meaner product had Flanagan chosen to keep the endless expositions & unnecessary epilogue at bay, for this story is too faithful for its own good.

Also, Read – Marriage Story (2019) ‘Venice’ review – The Melancholy of Love and the chaos of Divorce through Baumbach’s Lense 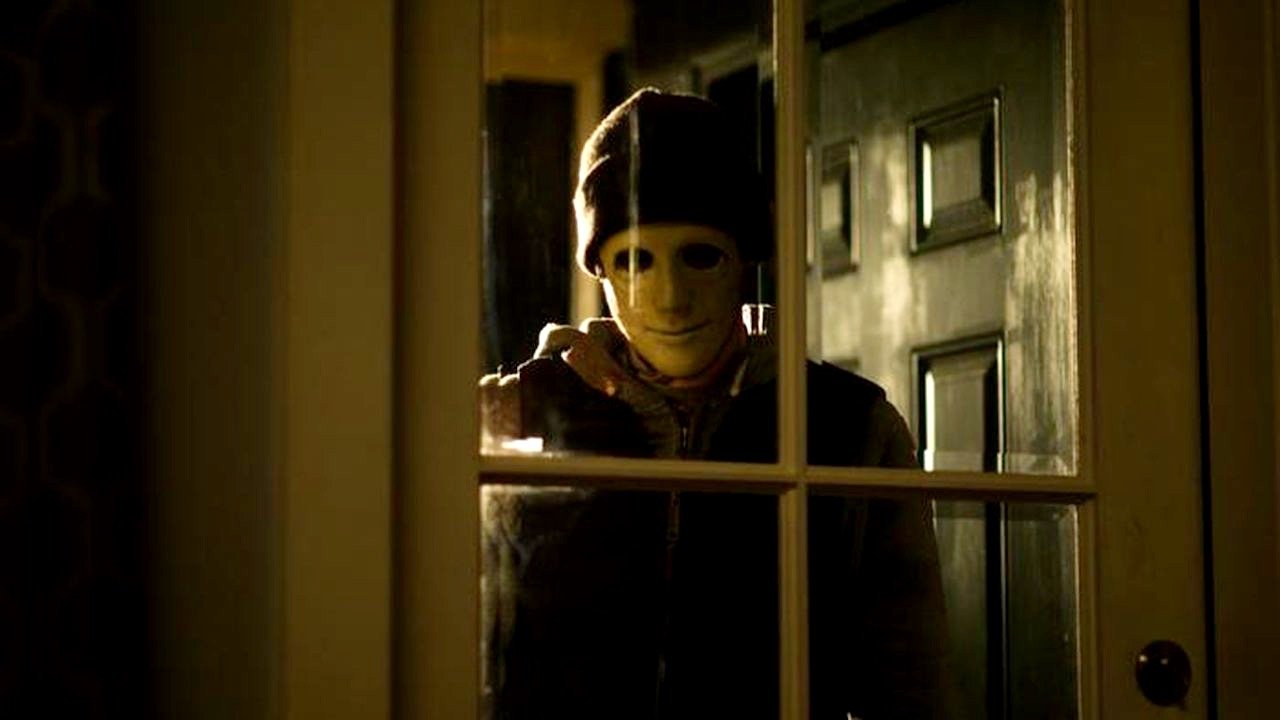 A slasher film through n through, the story follows a young, deaf & mute writer who lives a solitary life in the woods and is working on her next book. But her quiet & peaceful life is disrupted when a masked killer appears at her door and, after learning about her disability, takes advantage of the situation and torments her all night. But as this cat-n-mouse game nears its conclusion, our protagonist realizes that there is only one way to end this ordeal.

At first, Hush feels like a fresh breathe of life in the home-invasion subgenre of horror. In fact, it even had the necessary ingredients to book its spot amongst the finest examples of its genre. But a few poor creative decisions eventually prevent it from soaring to new heights. Still, for what it’s worth, it is a palpably tense, downright thrilling & gleefully violent delight with raised stakes that deliver the desired goods despite settling for less than what was up for grabs. 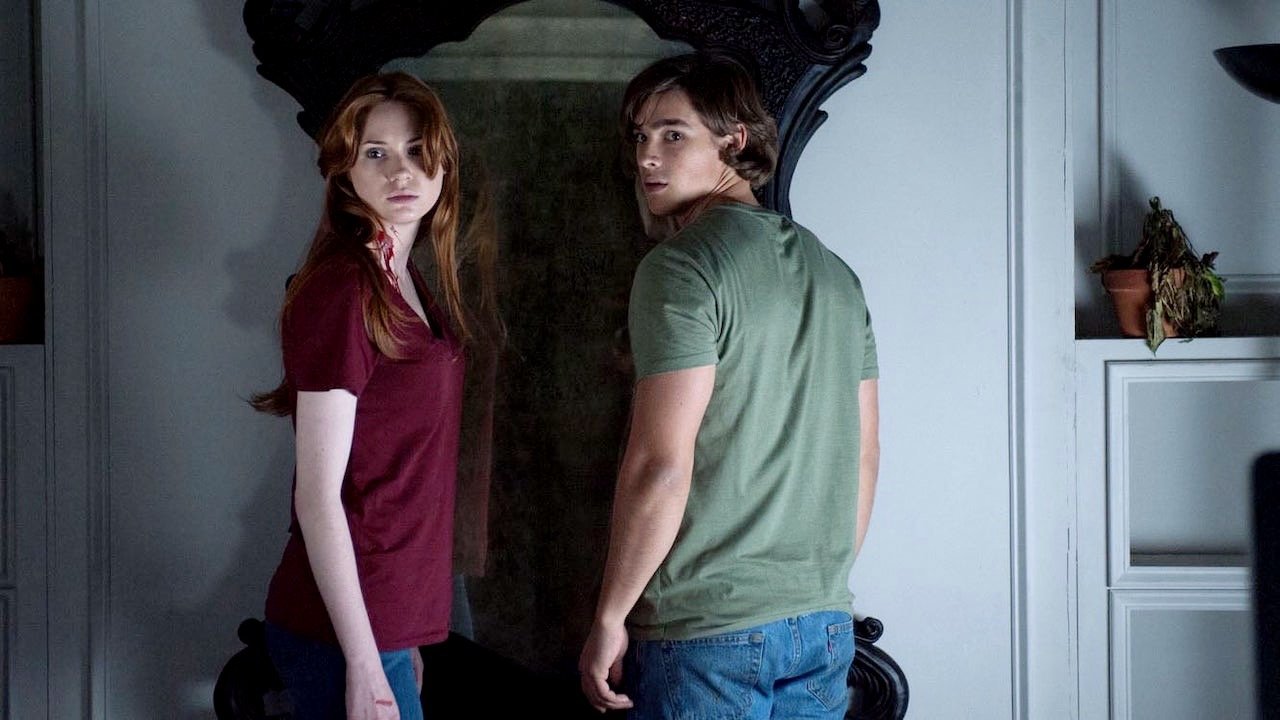 Based on Flanagan’s own short film, Oculus tells the story of a young woman who acquires access to an ancient mirror which she believes to be responsible for the death & misfortune that her family suffered over a decade ago. Intending to destroy the mirror, she first tries to document its powers on the camera in order to prove her brother’s innocence.

Smart, scary & unpredictable for the most part and encapsulated with an aura that reeks of dread, mystery & a sense of foreboding, Flanagan’s sophomore feature film is thrilling, entertaining & more involving than your average horror flick. Packed with genuinely unnerving moments, it keeps playing with our perception of reality and is engaging & suspenseful throughout. In only his second feature, Flanagan exhibits a strong control of his fledgling craft. 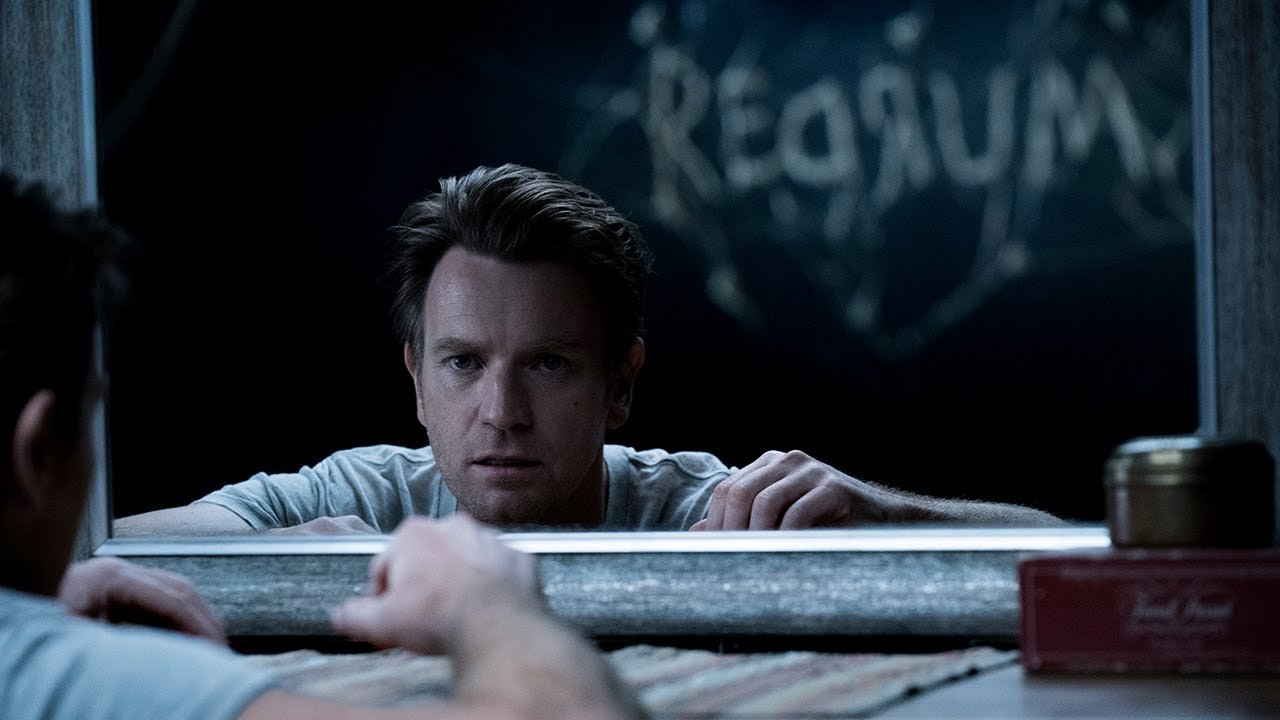 Years after the events of The Shining, a now-adult Dan Torrance drinks heavily to suppress his shining abilities but eventually finds some semblance of stability in his life after moving to a small town where he joins a self-help group, takes a job at a hospice, and learns to use his shine to comfort dying patients, thus earning the titular nickname. In the meantime, he comes into contact with a young girl with a similar trait & maintains telepathic interactions with her. But when her life is under threat, he is forced to confront his past demons in order to save her.

Inarguably the biggest accomplishment of Mike Flanagan’s career, Doctor Sleep is an intelligently crafted & ingeniously narrated sequel that weighs the works of Stephen King & Stanley Kubrick with clarity and delivers a downright captivating end product that succeeds as a worthy follow-up to both sources. Paying homage to Kubrick’s classic while retaining the essence of King’s novel, this unnervingly calm successor to one of the greatest works of horror is no less than an achievement. An assured masterpiece, by all means, Flanagan’s latest is a shining example of its genre that’s more than capable of standing on its own.

What do you think? How would you rank his films? Leave your answers in the comment below!