Ant-Man (2015) Review: Miniature Dreams: In one of its classiest scenes, the miniature hero is fist fighting the serum-induced miniature-monster – Yellow-Jacket in a locked suitcase. As one of them misfires and hits a random phone’s home-screen saying “I am going to disintegrate you.”  Siri obeys and starts playing Disintegration by The Cure. We find our hero and villain fighting odds while Disintegration plays in the background. Is Ant-Man filled with such amazing scenes? Sadly, the answer is a big NO.

Marvel has managed to get the audience in its favor with every single drop they throw into the big ocean of films it has created. The people at Marvel know this for a fact that people are suckers for superhero films. Also, superhero films with witty humor are a big add-on. But I wonder how long will they manage to use and re-use the same formula over and over again. The good thing is, they all know how good or bad their comic material is and hence they sell and under-sell it accordingly. When a film mocks itself to make it work along with the big leagues like The Avengers you know that you are not up for an amazing time.

While Peyton Reed’s Ant-Man (2015) is not entirely bad but it has its share of negatives. For instance, the film is too modest to start with. It never takes itself seriously. i.e referring to the numerous times we get to have a mention of The Avengers and their latest killing spree. While Peyton brings in well-written mockery into place, the unwanted and possibly shoe-horned Easter-eggs and cameo just prove that he was in splits when he was not able to decide what to put up next. The very first hour of the film feels like Peyton was on his microphone the whole time shouting out to his cast “Ok people, we are going to do this for a couple of minutes, just for the sake of it.”

The humor in Ant-Man (2015) is also not constant and doesn’t always hit you like it does when Tony Stark is on the screen. If you take out Michael Peña, (Who I very strongly believe was a part of Edgar Wright‘s screenplay) the film isn’t as funny as it seems. Also when you compare it to the latest Marvel films it has more jokes but it’s not funnier. Almost half of the film is staged and made in Dr. Hank Pym’s (Michael Douglas) house giving very little footage to anything around, making it unintentionally claustrophobic. 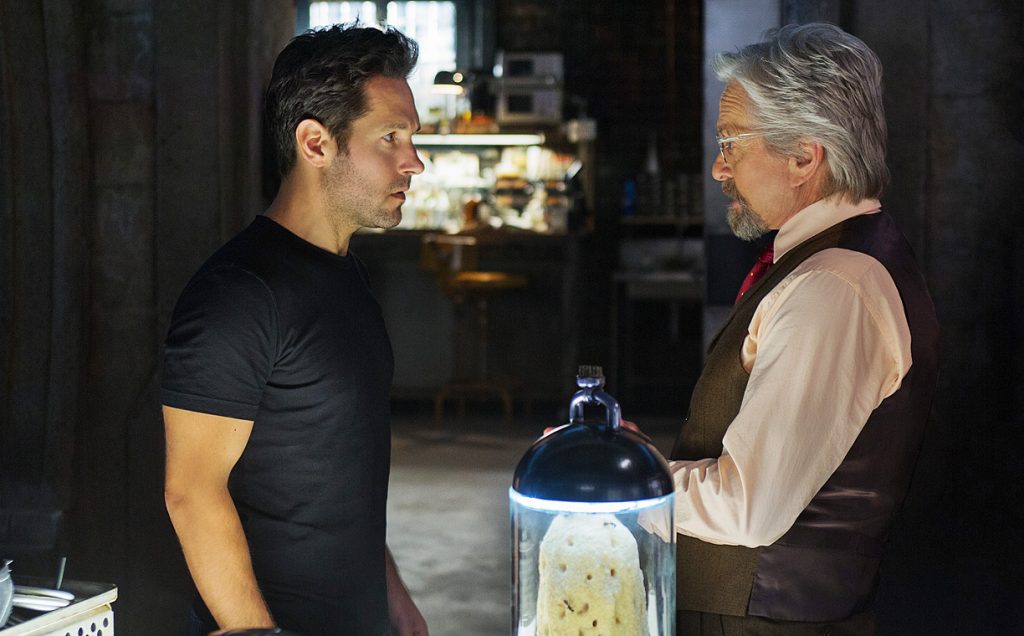 There is fun to be had in Ant-Man (2015). Some of the sequences are good but it’s never thrilling or exciting enough. Like the first time, Tony Stark dons his suit or the first time Thor picks up his hammer, or even when The First Avenger rides on his vintage motorcycle throwing his shield around. There are glimmers of greatness in the film but they never take you to the level of bravado an origin story deserves. People might argue that the first half is dull because of its setting and establishing things up. But the film takes too long to establish things and the timely fashion in which it proceeds is exceedingly monotonous.

Michael Douglas is the only one who seemed to have a great time playing the ex-Antman and mentor for the criminal-turned superhero. Everyone else felt out of place to me. I love Paul Rudd but this film does what Jurassic World did to Chris Pratt. His bland expressions don’t work in the film’s favor. It felt like he was trying too hard and it took away all the charm that he possesses. I felt so pissed when he instructs his fellow ants to do things for him, encouraging them at every instance. It felt like a poor farmer was feeling sorry for his proteges asking them to work over-time.

Evangeline Lilly is a complete miscast. It’s either her role was badly written or she fell prey to some odd editing. There’s a scene very early in the film where after a certain scene the camera cuts out to her face when she shrugs for an instance. I wonder if that was supposed to be funny? Also, she has zero chemistry with the leading man. Corey Stoll is a great actor (Courtesy: House Of Cards) but the film doesn’t even take him seriously. We are told a couple of times that a certain thing is messing his head up but we never see it happening. I think Marvel needs to take their fans a little seriously.

Ant-Man (2015) is a film that could have achieved greatness but it never will. Thanks to the money-hungry people who wanted to shoehorn important (Read: Not so important) MCU stuffs into this film resulting in Edgar Wright’s departure. Wait for it to come your way for free. It’s not worth going to the theaters.