Atlanta (Season 4), Episode 3 Recap & Ending Explained: With Atlanta, Donald Glover has created an intricately detailed, surreal universe over the years. The lives of its black characters are explored with nuance & depth that was unheard of in the representation of black people. Its deep dive into the world of rappers in an Afro-surrealist style is sublimely unique. The absurdity in each of its situations has more to say than what is seen on the screen and creating that magic in every single episode is a skill that the multi-faceted artist at the helm of the project, certainly has. The new episode is written by him along with Jamal Olori and is directed by Adamma Ebo.

Episode 3 of season 4 titled ‘Born 2 Die’ shows a further stage of Paper Boi and Earn’s life after riding on the wave of fame and popularity. After one of his rap concerts, Paper Boi (Brian Tyree Henry) is asked by a white, old man (and rich by the way he looks) to teach his son how to rap. He mentions that his son also raps, but he doesn’t have an on-stage persona like Paper Boi, his demeanor, facial expressions, and everything that makes him create a façade over there, which is what he wants him to teach his son. Alfred (Paper Boi) finds this request quite strange. Why would a white businessman-like man want this for his son? But the moment he mentions that he will be paid a handsome amount of 1 lakh, he turns back and accepts the offer.

Meanwhile, at Earn’s (Donald Glover) firm, the employees gather to learn about their new recruit. This is a new woman who pulled a gun on a black teen who had come to her house for fundraising. After this event, she wrote an entire book on her guilt, and it unsurprisingly rose to the level of the bestsellers list – since white people adored it and it affirmed their liberal stance from a distance. The black teen is suing her causing a dip in sales and they want it to go away from the public eye. While the employees suggest some solutions that can put her in a positive light, Earn suggests that they should consider other signees instead. His boss shirks this suggestion and sarcastically asks if he can bring someone like D’Angelo or Banksy. Earn is confident that he can bring in D’Angelo. While others chuckle and shrug it off, he goes out to finalize the deal.

Meanwhile, Alfred reaches a music studio to meet the white kid he is supposed to teach. While he thinks he wouldn’t need an introduction, he needs to do so for this kid, Benny – who considers him a rapper that his dad bought. Later, when the teen yodling in the studio comes out, he mentions having listened to Paper Boi when he was little. All of this makes him feel like a has-been for the time being. Later, another white kid walks with a black rapper who recognizes him right away. After listening to a cringe rap attempt by the teen, they walk out and speak about their lives and ways of making money as rappers. This other rapper pokes fun at his way of earning from just stocks besides touring and asks him to attend a gathering the next night that he’s going, where he can learn about an alternate way of earning that will make them money to sustain their lifestyle without following a boring way.

Later, Earn receives an address of D’Angelo’s hair braider, and reaches a fast food chain of Rally’s – which he finds strange to find in their state. He finds two doors for ‘Only Employees’ and for ‘D’Angelo’. He enters to find a black man reading some book who answers his question with a straight face. He goes to the waiting area and sits down on a small carpet lying there. While that happens, Alfred goes to the gathering and finds some black rappers as old as him. One of them walks to the stage and starts with his speech about his money-earning idea that doesn’t involve rapping. He shows a picture of a white kid surrounded by a bunch of black teens and suggests that race determines success in the industry – also hinting at such culture-vultures profiting on what started as black art due to its growing popularity. 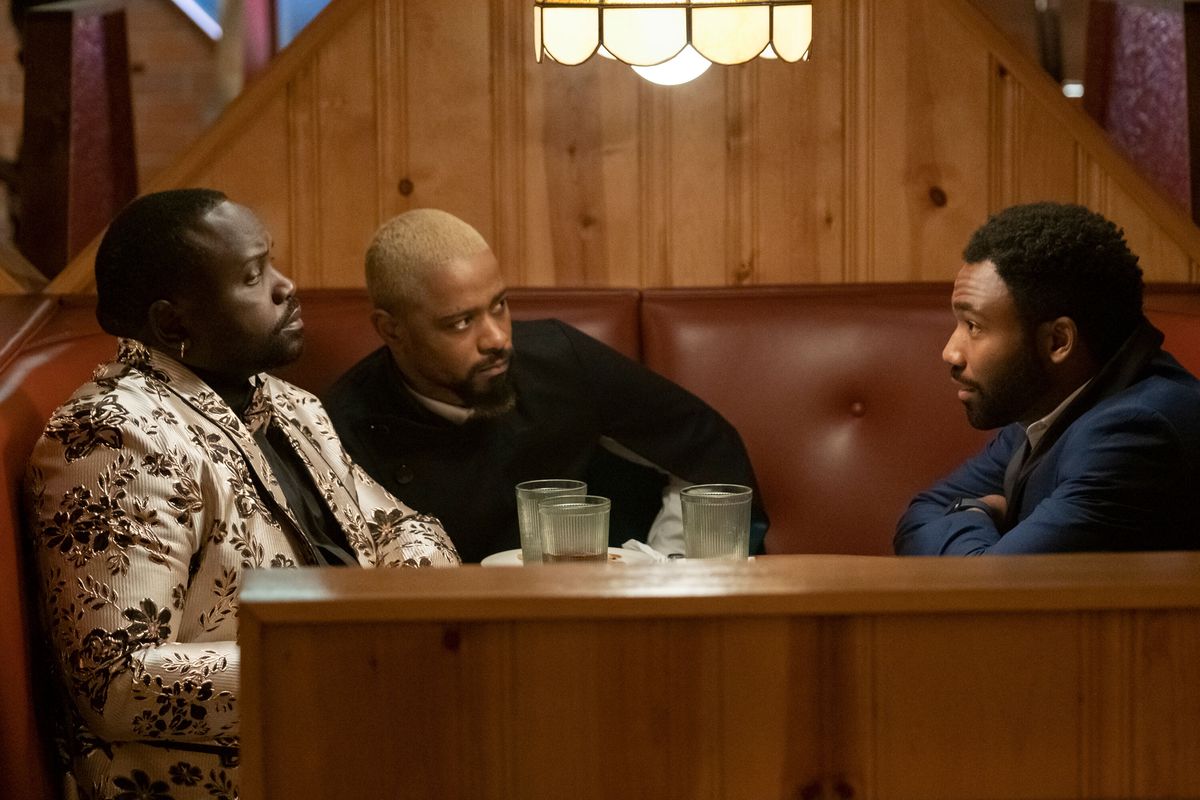 He shows a board with an equation – ‘YWA + Grammys = $$$’, YWA being a young white avatar like the kids from the studio. Alfred feels using his rap to get tour deals is a better way to earn than nurturing a white kid. One of the members tells how the quality of his album or his Grammy win wouldn’t matter due to his age. They try to convince Alfred of the irrelevance of old rappers like him, and he argues back with his present experience, of still getting great gigs. To back their argument, one of the rappers mention Blueblood who died with the same irrelevance.

So, Alfred decides to go to a school, and over there, he finds Benny performing for school kids and them cheering for him. After the hullabaloo gets over, he asks if he can be his manager. Benny refuses this request and mentions being signed by someone else. Meanwhile, Alfred also comes across the yodeling kid who was flirting with a student. He looks a bit unwell for some reason, and Alfred decides to help him and gives him a ride back home. While that happens, it seems like Earn is still stuck in the waiting room for D’Angelo. After a point of getting bored and frustrated, he goes to open a cupboard in the same room and finds just some random objects and no answers. So, he gets even more frustrated and takes out his anger on the man sitting there.

He picks up a book next to this man. In some time, he goes through some sort of realization and mutters – ‘We are D’Angelo’. After his request to experience D’Angelo, the man opens a part of the wall and through that opening, which works like some sort of portal, Earn reaches another room with a black artist singing a soulful song. Upon asking, he mentions that he is D’Angelo! He mentions being stuck there without a shower for 5 days and D’Angelo as some sort of community that wholeheartedly worships the artist. This doesn’t sit well with Earn since he wanted to sign D’Angelo as manager and the answer doesn’t help him in any way. This artist mentions some strange dream Earn had and being frustrated by this entire experience, Earn just leaves.

At some sort of fancy ceremony, all the rappers from the old rappers’ group come across one another. Alfred mentions having signed Yodel kid which surprises all the others since he did it in a very short time. Over there, he comes across Benny and asks him about the whereabouts of the Yodel kid since he couldn’t get in touch with him. The white kid mentions that the Yodel kid has died. His driver found him dead when he went to pick him up. Benny thinks he probably OD’ed and notes how that would make him win a Grammy. And his prediction turns true when Yodel kid’s posthumous award is announced.

Watching a woman receive it with a child who professes songs of his greatness, Alfred, Earn & Darius get frustrated. Darius mentions how Grammys are not for black men. Having gone through the struggles of trying to acquire someone as an artist, Alfred then asks to Earn how he does it. Earn mentions how he has learned to do something not because it feels good but because it survives. The stage of acceptance in their anger towards the system is probably reached where they see themselves resigning to the reality in front of them instead of trying to resist it.

Bandit (2022) Movie Ending, Explained - Why did Andrea pretend to not know anything?