Bad Sisters (Season 1), Episode 6: Recap & Ending Explained: The sixth episode, ‘Splash’, finally sees Grace take some agency into her hands. JP’s villainy manages to outdo itself again. Focused on Grace, it sidelines the other sisters in favor of providing us with a more detailed look at just how gloomy her domestic life is. The murder plotting here is given much less time in comparison to the previous episodes though the actual attempt is the funniest to date. Thomas’s discovery has furthered the complexity of what the Claffin brothers are headed towards, given that their plight was already detailed in the previous episode yet their goal still remains sharply in conflict with the well-being of Grace and Blanaid. Becka and Matt’s relationship feels somewhat like an adjunct to the plot but given how tight the writing has been till now, it hopefully will tie into the greater scheme of things convincingly.

In the aftermath of the paintball shooting, Bibi goes into a shell out of guilt. Eva, Ursula, and Becka’s constant attempts at alleviating her remorse do not work. At the same time, they cannot bear the sight of Grace diminishing as a woman day by day because of JP’s nasty treatment of her. A chance comment by Eva makes Ursula come up with a new plan – drugging JP with Rohypnol and then putting the incapacitated fellow in the bathtub, hence, making it seem like he drowned himself in it. Ursula will procure this drug, which cannot be traced in an autopsy, from her workplace. While Ursula is ready to go ahead with the plan as soon as possible, Eva is insistent that they wait till Bibi comes around. Becka manages to get this job done by convincing the contrite Bibi that Cyril will have lost his eye for nothing if they don’t succeed in killing JP. JP’s mother, who suffers from Alzheimer’s and is friends with Becka, confuses her to be her daughter and gives her a cheque for £8,000 which Becka contemplates taking advantage of.

A sexually impoverished Grace just cannot convince JP to have sex with her. In her art class, the model tells her that Grace’s body is for her to do whatever she wishes with it and not her husband. She buys a nightgown to entice JP but on wearing it, he rebuffs her by stating that according to him, she’s most beautiful when she doesn’t portray any of her sisters’ qualities. Grace asks him to take some Viagra which antagonizes JP and also reveals to us that it’s his impotence that is the problem in their marriage. At Eva’s place, the sisters doggedly try to convince Grace that the cold turn their marriage has taken isn’t her fault. Eva gives the skeptical Grace a vibrator as a solution but it doesn’t work for her and in a hurry, she hides it in a bathroom towel back at her place. 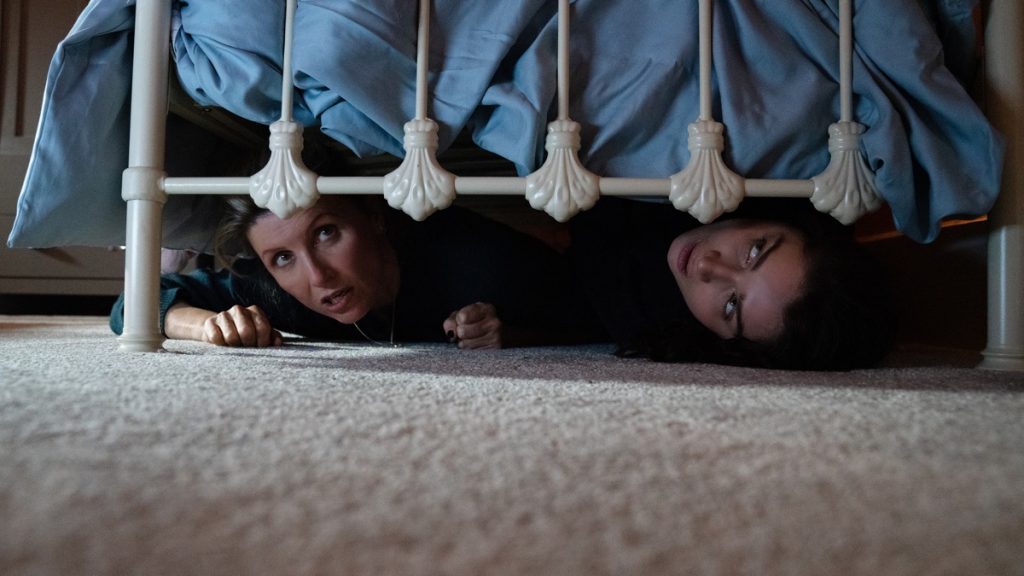 JP’s plan to take his boss out on his boat gets canceled at the last minute. His neighbor, Roger, who is always asking him about when he’s taking his boat out, happens to be at the pier when he is and JP decides to respond to his attempts at persuading him with a biting insult. While returning home, JP notices Roger and Grace playfully dancing in their garden which disgusts him so he instantly takes her inside. In order to play a sick prank on Roger, he falsely charges him with molesting his nonexistent son while remaining anonymous. The police arrest the innocent Roger, a sight that JP sadistically enjoys. When he finds out about Grace’s vibrator, he confronts her about it and insults her as a woman who has grown old and unattractive, thereby not arousing him in the slightest. A livid Grace leaves with Blanaid for her netball game, despite his threats for her to not go. Later that day, he sends her a voice mail where he implies that he’ll kill himself if she doesn’t get back home soon.

In the present day, Becka and Matt have a good relationship going. At her place, while going through her stuff one morning, he comes across Minna’s cheque and photographs it as possible evidence of some kind of chicanery. This tells us that Becka never withdrew the £8,000 that Minna gifted to her. Thomas keeps repeatedly trying to get in touch with Matt but fails. Outside JP’s place where he’s keeping watch, he runs into Roger who in his anger in talking about JP, slips out that JP had tried to commit suicide once. Thomas tries to interrogate Grace about this, who only lets him know that JP never liked talking about his suicide attempt, she felt herself to be guilty and she found out whatever she knew about it only from the hospital. Thomas procures papers about JP’s suicide that get him childishly excited. He calls Matt, imploring him to forgive him while stating that the new information he has may just be what they need in ensuring that they don’t have to pay the insurance claim.

On the night of Blanaid’s netball game, the Garvey sisters arrive at JP’s house to murder him. Bibi speculated that given his habits, he’d go out for fast food which would give them the perfect window to break into his house and put Rohypnol in his nasal spray that he’s addicted to. When JP does indeed leave the house, Eva, Ursula, and Becka enter to do the deed. As Ursula is about to finish pouring the Rohypnol into his nasal spray bottle, JP comes back home on time. Bibi lets them know about this, causing them scramble all over the house to find a place to hide. He enters and ends up inhaling the switched nasal spray. This seemingly knocks him out.

Just when the sisters are about to put him in the bathtub, he wakes up in an inebriated state. He urinates in the closet, then goes out of the house without pants on, sits in his car, and starts to drive. The sisters follow him hurriedly in the hope of ensuring that he doesn’t kill anyone in an accident. JP’s intoxication confuses him into believing that he’s supposed to go out with his boss, Gerald. So he drives to the pier where while trying to climb into his boat, he trips and falls into the water. He cannot swim, so the Garveys keep looking with pleasant disbelief that a plan of theirs finally worked. Given the episode’s revelation of JP having attempted suicide, this slip and fall won’t kill him in all probability and is what will be interpreted as the aforementioned suicide attempt.

The Lord Of The Rings: The Rings Of Power (Season 1), Episode 4: Recap & Ending, Explained

Do Revenge Movie Ending, Explained - What plan do Drea and Eleanor forge to bring down their enemies?