Filth is a British crime thriller based on Irvine Welsh’s novel of the same name. It’s about a bipolar, manipulative and hallucinating cop, who is trying his way through a bunch of fellow cops, to secure a promotion that will ensure him winning his wife and daughter back. The film explores and tells us about this cop and what he is going through. Basically nailing down his collapse of the sort, as we see him lose his shit to drugs and other immensely dark things. 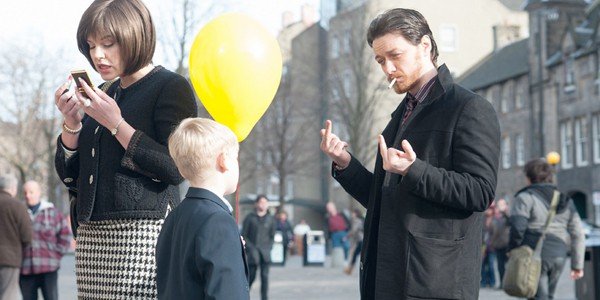 Filth is about people swimming in a quagmire of corruption and mental collapse and the ever unravelling mental-catastrophe.  I shall not be a douche and say this out loud: Filth is a very hard film to like. Remember the scene from Trainspotting where the main character gets inside a filthy toilet and you feel really uncomfortable. Danny Boyle instantly takes you into the blue wild ocean and you are back to normal viewing again. Filth, on the other hand, does not do that. If you get uncomfortable watching a scene you should not expect it to go soft on you, because it won’t.

In terms of its design, the film is inventive and bold. The truth is this, Irvine Welsh’s novels are not cinematic in their treatment, which makes it quite tough for it to translate to the screen. Jon S. Baird tries his best but some things do seem lost in translation.  I wouldn’t consider Filth to be a dark comedy. This is a really dark film and it gets darker as it approaches. Yes, there are funny scenes, but under the skin even they are grim, and they just grow grimmer and grimmer, peeling off this total mess, layer by layer. The film confuses you at times. You are not aware of the fact as to where the film is leading. Will it make sense when things end? But is it really the question you should be asking?

I go back to Trainspotting and remember John Hodge’s screenplay which had an admirable affection for its characters. The main problem with Filth is its grim tone which makes it impossible to feel affectionate about any of the characters. It’s partly because it’s being honest to the text and partly because Baird decided to play it that way. The vomitous, lingering ill effects of Filth will stay with you for a long long time.

Talking about the hallucinating cop, James McAvoy kills it completely. He is extraordinary in the film that won him the Best Actor award at British Independent Film Awards. This is McAvoy ‘s best act to date. ‘Filth’ is what its title reads: pure filthy trash. But even great trash is an art form. And this film is exactly that. However, it’s not for everyone. So, ‘Same Rules Apply.’