Quinn Shephard’s Not Okay (2022) apparently wants to be a satire about the social media-saturated society, as it opens with a playful addition to the content warning note, i.e., it features an ‘unlikable female protagonist’. The chances of hating her would increase proportionately when two other details emerge: she is white and economically privileged. Apart from offering nothing new about this contemporary cultural hegemony, the satirical part does suffer from the problems of narrative contrivances, annoying self-referentiality, and so on. But Not Okay does raise some pertinent questions. It makes us wonder why we are perpetuating a culture that shamelessly exploits real people’s real problems or how trauma and mental health issues become a commodity in the hands of fame-chasers and obnoxious Insta-influencers. In fact, such an online ecosystem seems to be devoid of any human qualities.

However, the foremost positive aspect of Not Okay is making us understand the emotional problems of the central character without overly sympathizing with her. It’s why you’d wish writer/director Shephard could have focused more on the characters, and less on the cringe comedy or inorganic social satire.  Zoey Deutch directs all her quirky charisma to play a tone-deaf and clueless 20-something millennial, Danni Sanders. She works as a photo editor in a supposedly woke online magazine named ‘Depravity’. The open-plan offices seem to feature a lot of hip things. But invisible divisions and hierarchies do exist. Danni aspires to be a writer and wants to get together with the office hottie, Colin (Dylan O’Brien), a douche-bag influencer cloaked under the haze of weed. 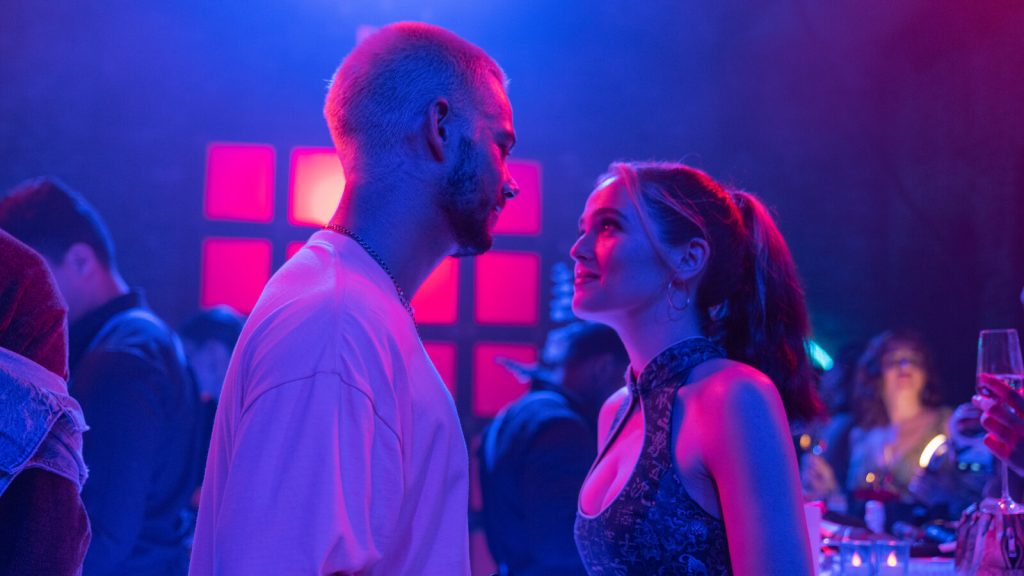 Danni pitches an article idea to her boss, Susan (Negin Farsad), which reeks of white privilege and simple-mindedness. She expresses FOMO for 9/11, and she’s serious about it. Danni’s neediness and desperation are so visible that most of their co-workers avoid her. Her cringey attempts at camaraderie include flattering her gay co-workers, who refuse to invite her to the queer bowling night. Danni hears that one of the magazine’s ambitious writers, Harper (Nadia Alexander) is going on a writer’s retreat. She later stalks Colin on Instagram, and enviously looks at these recent, viral pics from his South American trip.

The depression, loneliness, and unrestrained attention-seeking attitude join forces together and push Danni to concoct a devious idea. She decides to fake an Instagram-friendly Paris trip and even creates a simple website to support her narrative that she has been invited to a writer’s retreat. Danni’s inherent skill to manipulate images does work to her advantage until it all explodes. I mean there’s a literal explosion; a string of terrorist attacks rocks the French capital. Just moments after Danni posts a fake photo of herself standing in front of Arc de Triomphe, a bomb blast has occurred.

She wakes up to find a flurry of messages, inquiring whether she is okay. This is the point where Danni could realize the enormity of her mistake and come clean. But Colin, who earlier didn’t even remember her name, has texted her asking the same question. Faking a trauma can be one of the most horrific things to do. Nevertheless, the superficial young woman has already learned from the influencer culture that ethics and human decency can be sacrificed for the sake of being in the spotlight. Hence, the wannabe influencer adopts a trauma that isn’t hers and harvests the sympathies of people who earlier ignored her.

Soon, Quin Shephard introduces us to a character, who is the exact opposite of Danni Sanders. Danni attends a trauma therapy support group in order to plagiarize the survivors’ experience and pass it off as her own experience for the magazine article. Here, she comes across Rowan Aldren (Mia Isaac), an outspoken teenage activist and the survivor of a school shooting. Rowan is truly not okay, and she is constantly crippled by the residues of trauma. Yet she channels her rage and pain to spearhead a campaign for gun-control laws.

Predictably, Danni thinks that associating herself with Rowan could facilitate her rapid rise as an influencer. She even uses Rowan’s fame and profound ideas as a springboard to achieve fame. She invents one of those viral yet cringe Twitter hashtags, #IAmNotOkay. But when she spends more time with Rowan and grasps the teenager’s burdens and true strength, Danni’s conscience troubles her. The young woman has always yearned for validation, friendship, and a sense of community. 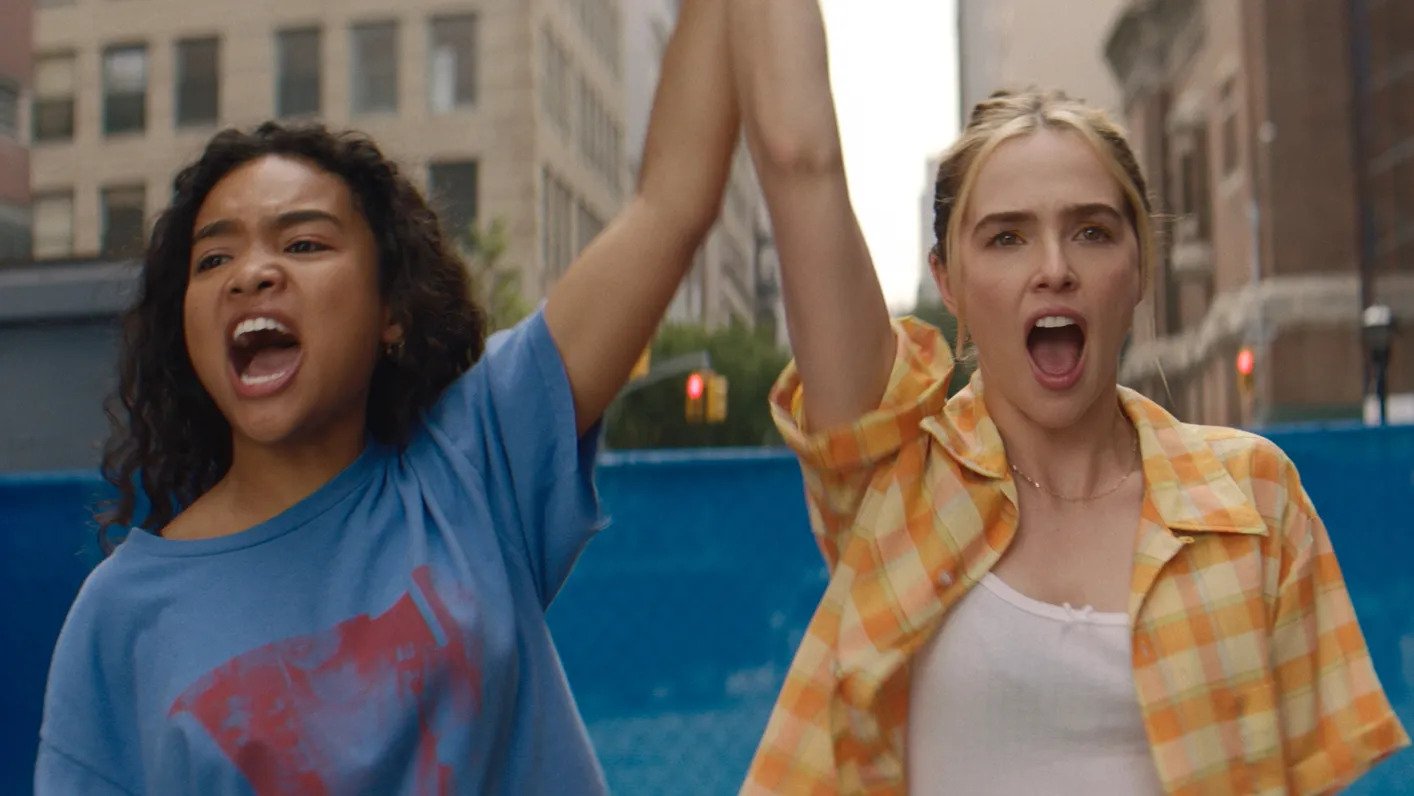 Still, the horrible lies troubles Danni in the form of hallucinations and dreams. Moreover, the stack of lies crumbles soon and Danni becomes the easy target for online shaming. She isn’t naive enough to comprehend that social media fame (or fame of any kind) is a double-edged sword. Yet the compulsive habits of online life made it easy for her to maintain the lie. Now that everything comes crashing down, Danni’s deepest desire to be seen and recognized is granted.

Though Ingrid Goes West (2017), Eighth Grade (2018), and quite a few other American movies have already captured the hellscape of social media that’s saturated with catastrophic self-importance and obsession, Not Okay’s intriguing premise unflinchingly picks apart the malaise of our times. Furthermore, Quinn Shephard makes a predictable yet poignant statement about the real victims and survivors of the brutal online culture. The strong later half of Not Okay makes us think that Shephard’s narrative would have been more fascinating if she had explored more of the character dynamics between Rowan and Danni. While the satirical part evokes awkward laughs, it revolves around quite a few one-dimensional characters (like Colin) who fail to make any impact on the narrative.

Not Okay might be made for American audiences glued to their smartphones and lost in the doom-scrolling abyss of Instagram or Facebook. But the American filmmakers dealing with this subject can tone down a little on the allegedly clever, self-referential aspects. Shephard, however, ends the film on a strong note. Danni walks away at a pivotal moment, offering the spotlight to Rowan. She may not be okay for a long time. But the filmmaker doesn’t bestow upon her a contrived redemption angle.

Overall, Not Okay (102 minutes) is an entertaining dark comedy that shows the perils of the narcissistic, self-destructive online behavior that weasels its way into our hard realities. It’s also an indictment of white Americans’ privilege.

Also, Read – Sweat [2021] Review – A haunting albeit unfocused exploration of the perils of social media fame

The 20 Best Spanish Thriller Movies of All Time