Any attempt to review this film is made after a long period of brainstorming over the dilemma it puts you in as a viewer and as a human being who is compassionate for little essential stories. Chuskit not only brings on your table a story that we might know but don’t think much about but also exposes us to a culture unexplored by most of us. Those who are native to it can rejoice at the responsible attempt made which doesn’t sensationalize or exoticize the indigenous culture and the way of life.

Chuskit is a little girl living in a fictional village in Ladakh who, at an early age of six, becomes victim to an unfortunate accident which leaves her paraplegic. Her father works as a trekking guide and her mother works in the nearby field. Chuskit is younger to Stobdan who is a curious young boy with a knack for innovation.

When the family is out for their duties, Chuskit is left under the umbrella of her grandfather Dorje, who, like most of our elders, is a traditional man rooted in his philosophies and tastes. Through Chuskit we are exposed to a conflict that is quintessentially the story of our lives.

Chuskit aims for the most ordinary of things which she is unable to be a part of, like school and outdoor games. Chuskit yearns for what she’s rendered devoid of due to what most people choose to call a destiny. But she wants to break her shackles, regardless of how risky its outcomes appear to be. Her grandfather, on the other hand, is the representative of most necessary of restraints required in uneventful circumstances like these.

He provides a significant dose of pessimism as he strives to teach Chuskit to learn to abide by her limitations. He believes, in his own right way, that the only way to happiness is being satisfied with whatever life leaves you with. Chuskit rebels and that’s how the drama comes into the picture. Her aspirations revolve around being able to go to school and have a normal life as others do. Her grandfather wants to keep her safe inside the house, before his eyes.

Chuskit has all the elements of a heartwarming piece of cinema. Inspired by the book Chuskit goes to school, Priya Ramasubban, an eminent documentary filmmaker, weaves a biographical family drama in her debut film. 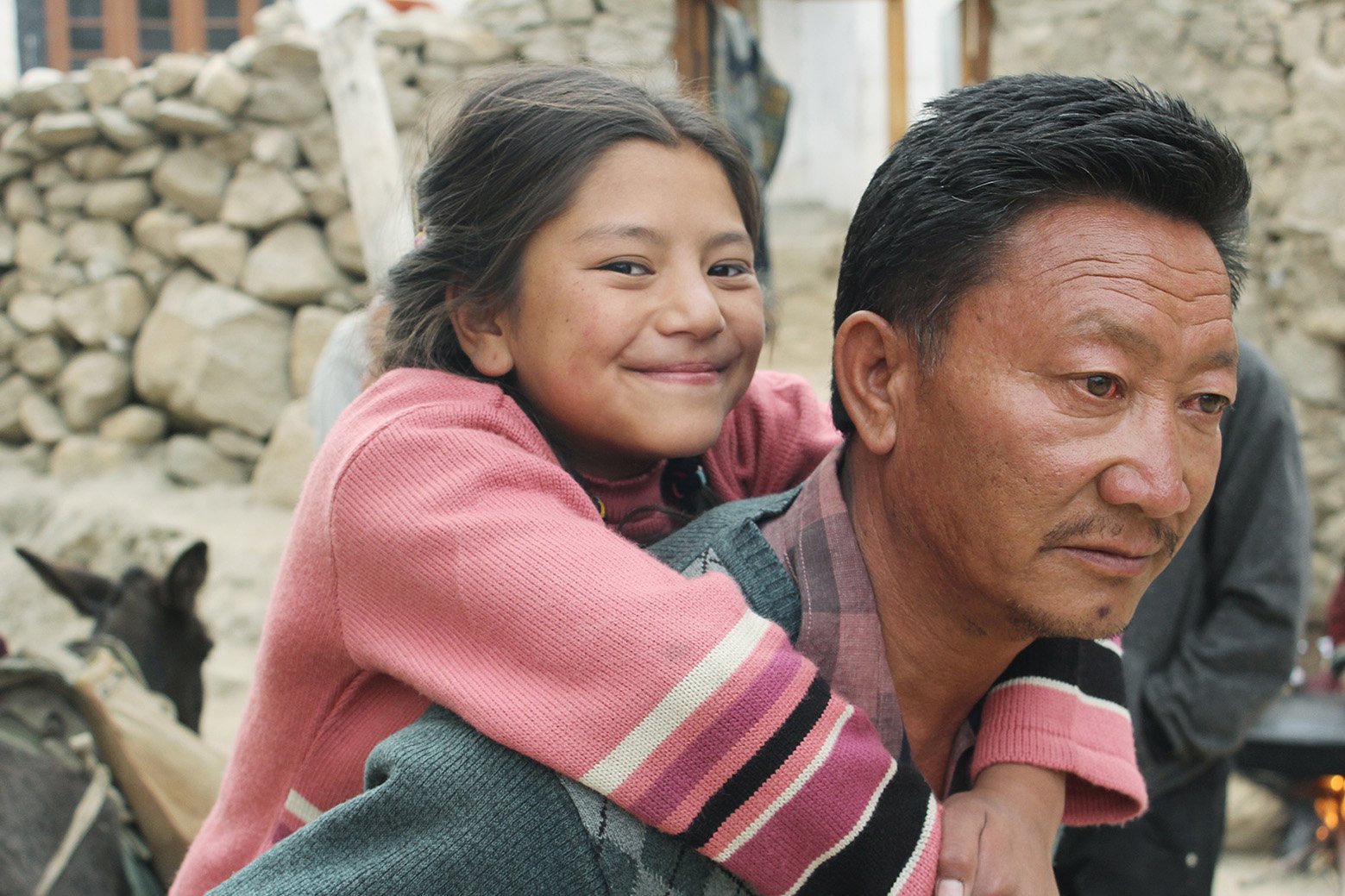 Priya is sensitive in her approach and makes sure that realism stays intact when cinematic elements are infused in the film. She also carves an avenue for a cultural exhibition that comes in the disguise of a metaphor, edited into the film amidst the various sequences. As a person who has neither been to the mountains and monasteries nor has seen Ladakhi fiction, the novice individual in me enjoys the sight of costumes, food, the activities undertaken to spend time and meditate, and the daily chores of life which come in flashes.

Priya tries to exploit symbols in multiple frames but keeps it low which speaks of her intentions as a filmmaker. She knows the audience she wants to serve the story. She seeks minimalism and while doing so, she ensures a realistic portrayal. The film becomes important in the process.

When it comes to realistic cinema that revolves around real-life characters and events, we have a range of films that act as a window to the dark alleys of our world. The blackest of chapters and the most depressing of events. Be it the gut-wrenching tale of injustice in Visaranai or the horrifying tale of genocide in Schindler’s List.

But when stories like Chuskit are explored, and we realize that it happened in some part of the world at some point in time, we smile. Our faith gets restored for the spectrum of reality is vast and just like how infinite real numbers fall between the intervals of two real numbers, an infinite number of possible realities can exist in this spectrum.

On the technical forefront, the film is mostly crowdfunded and is made on a low budget which leaves less room for lavish production quality. The cinematography is taut and minimal, but I am not an admirer of the given colour temperature. I would have appreciated if there were a few more long shots capturing the beauty of the locality.

A few sequences are repetitive and subplots do not merge into the story quite smoothly and comprehensively but feel like a rugged terrain. however, one can argue that they were merely elements cleverly positioned in the narrative to propel the story forward. Acting performances are mostly subtle but falter at some places, which can be overlooked as the film is shot mostly with local actors with most of them having no prior experience.

The climax felt rushed and condensed considering the sequence is the heart and soul of the real story. Longer and more concise screentime along with a comprehensive screenplay was deserved by the same. The background score is melodious while the sound design feels apt. The first half is a bit stretched as its entirely exploited for plot development whereas the second half consists of an incomprehensible turn of events which appears to be an effort to wind up the story.

However, this doesn’t discredit the narrative as it is neither disturbing nor indigestible. On the contrary, it aligns itself with the expectations any viewer will have while watching the film that makes it pleasing and warm. Chuskit deserves our attention as she is brimming with aspirations and determination.

“Chuskit” WILL BE SCREENED AT THE 10TH LONDON INDIAN FILM FESTIVAL, 2019
CLICK HERE FOR OUR COMPLETE LIFF COVERAGE