Home»Reviews»Films This Week»Game Over Netflix [2019] Review: Taapsee Shines in The Oddly Fascinating Thriller
Films This Week/Reviews

Game Over is now streaming on Netflix

If we think of the recent years from the Indian cinema, Game Over is one of the most cleverly-crafted films, in order to bring about the intended horror. The film is not particularly inventive in its stylistic approach as much as it is apt to present the world through the psyche of its character. It puts us into the situation while working more as a psychological thriller than seeking suspense. Despite that, it wouldn’t have been engaging without its camerawork and the outlandish score as the script isn’t focused on any of the topics that the film wants to discuss.

In the film, Taapsee Pannu plays Swapna, a game-developer who seems to be trapped in her own maze. Because of some horrifying incidents from her past, she’s bedridden and is extremely scared of the dark. For the same reason, she spends her time playing Pac-man, a video-game about a character trying to survive through the maze, while scoring as much it can. While giving her a necessary dopamine dosage, the game also works as an allegory on her own condition. Being detached from her parents from her own choice, she lives in the house with Kalamma (Vinodhini Vaidyanathan), a maid who takes good care of her.

Similar to GAME OVER Netflix: THE 10 BEST HINDI FILMS OF 2018

Due to a severe regret from her past, Swapna gets a panic attack whenever she predicts something approaching in a similar way like the past. ‘Anniversary effect’, as her psychologist calls her condition, appears to be a phobia about the first day of the new year- when presumably the horrifying incident happened. Meanwhile, we come across many signs and messages signifying the recurring incidents from her life. While the insufferable pain makes Swapna lose her will to survive, she is presented with an example of a person who persisted despite all the odds going the other way. Strangely, her connection with this person makes her question her own decisions. A woman who has to fight with every tool that she has speaks more about the society we live in. 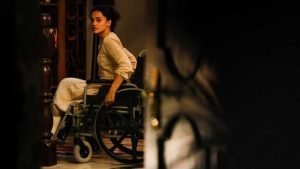 Despite the overly melodramatic moments from the film in between, it presents a standpoint of a gamer dealing with her choices. Does life provide as many opportunities that a game does? She falls in the conundrum. While presenting footage through the film, the director tries to amplify apparent claustrophobia with the moments of déjà vu, which often blurs the lines between reality and hallucination.

What I liked about the film is how it hardly relies on preachy expositions; neither does it try to explain everything out-front. Also, the approach for a simple home-invasion by turning it into a gory, nightmarish reality as a part of one’s choices is highly commendable. But with the numerous topics that the film tries to discuss, it hardly clears the air for any of those. And I’m not against the supposed ambiguity or a lack of sense of closure that put many of the viewers off. But the film had many loose ends which I’m refraining to discuss as they would give out major spoilers.

Taapsee is receiving the unanimous praise for her performance, even from those who disliked the film. She’s worth every bit of it while depicting a vulnerable character that uses all her might to get out of its ‘maze’. She isn’t shown merely as a victim but more as a fierce survivor, which presents a deeper character for her to explore. The shaky camera works better than a mere gimmick complemented with film’s overtly dramatic score by Ron Ethan Yohan. I can’t comment on the dialogues as the Hindi dubbing is so subpar that some of them turn out to be unintentionally funny. Tapasee is the saving grace through all the torturous ordeal.

Although while she successfully portrays much of what’s in-between the lines physically, the narrative is too confused with its overstuffed subject-matters. The confusion isn’t particularly a virtue here when most of the themes from the narrative hardly connect with each other. As a result, no matter how skillful the director Ashwin Saravanan or even the cinematographer A. Vasanth is, the edge-of-the-seat thriller loses its impact the more one thinks about it. The more you try to peel its layers, the more they seem facile.

Welcome Home [2019] Review: A Cerebral Deconstruction of The Institutions