Despite the absolute unanimous praise, Greta Gerwig’s directorial debut Lady Bird received, I hated what I thought was an unlikable film that was enamored with its unlikable lead character. Gerwig’s sophomore film, Little Women (2019) is, conversely, a tremendously likable film – all the praise for her first film should’ve been reserved for her second. Little Women is brimming with life (perhaps even overflowing), so that the astonishing performances from all involved, their peculiar, yet very life-like dialogue with each other, and the transformative set-design and cinematography all work entirely together to bring me right into its world, reacting to the joys and sorrows of these women as if I were right beside them.

Whereas Lady Bird was written to be compromised of quotes that carried no cumulative value (but they were more appropriate for animated gifs about ‘current moods’), Little Women actually has dialogue – you often can’t just break up the lines from each character and have them work on their own, they relate to each other, which truly enhances the communal feeling of these characters. There was a wall between most of the characters in Lady Bird, where they would just spout Tumblr quotes to each other, but Little Women has active and authentic dialogue between the characters, quite a bit of the time overlapping each other, and given that this is a dialogue-heavy film, it makes it sparkle with liveliness.

There’s a true sense of each of these women living as sisters, as they act so similarly, yet still, reveal their contrasts and conflicts. Among the many varying and differing values of these women is the notion of marriage, which is so thoughtfully pondered for these women in this era: Meg values its traditionalism, security, and companionship, but Jo feels the independence that it would otherwise be stifling. Unlike Lady Bird’s to-the-point philosophizing, Little Women doesn’t align itself with either side but merely presents them, and its opinions on the topic seem to evolve and mature just as Jo’s does.

The film does admittedly stumble about as it tries to solidify an ending that can satisfyingly uphold the dual opinions it presented, but it manages to end on a somewhat ambiguous note. It even playfully parodies a key romance trope, but astonishingly manages to both send it up and honor it. 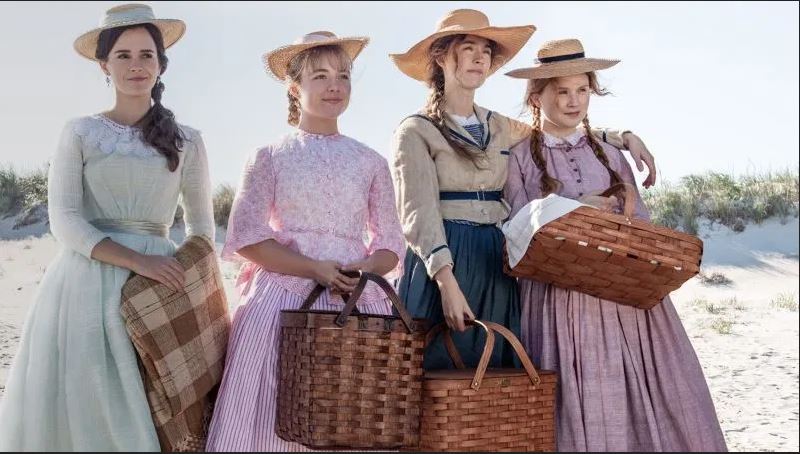 Though the film spends just about equal time with each of the sisters, it is Jo who is at the center of the story. Whereas Lady Bird was enamored and even delighted by its solipsistic and immature main character, Saoirse Ronan’s Jo here is instead far more warm and likable, but the film still feels like it’s merely presenting her rather than aligning itself with her. Gerwig works better with having multiple main characters so she can spread out the multi-faceted views they each have, issuing out their overlaps and differing beliefs, rather than latch on to one title character. The strain of Lady Bird trying to make you accept and enjoy the animosity of the main character is replaced here with Little Women merely bringing you into its world of sisterly devotion and having you as a guest.

Although both films have been overwhelmed with praise, there’s clearly a distinction between the two. It was one that I felt strongly, that Gerwig’s follow-up directorial effort is easier to go down and it works harder at engaging with the gamut of emotions that comes with coming of age. Lady Bird, although not dead, felt zombified, identifying with the cynicism and pettiness of its main character to a point of making it unappealing – but Little Women (2019) has emerged as a far more endearing and far more speculative film that makes for a more inviting experience.