Onoda has everything working for it. Yet, it somehow misses the mark to achieve greatness. Why is that so, is it a good enough question, to begin with? Onoda: 10,000 Nights in the Jungle is a three-hour epic that revolves around the true story Japanese soldier during the second world war who has been given training never to surrender. Suffice to say, he took his duty too seriously to continue for 29 years more, refusing to believe that the war is actually over. Serving as the opening film of the Un Certain Regard section at the 2021 Cannes Film Festival, this unbelievably immersive tale comes along with wide, somewhat unusual credits. It is a biopic of a Japanese soldier made by a French director named Arthur Harari and is funded almost entirely out of Europe. Where does this information stand in understanding the context of the film? It is telling.

The question lies in the manner in which this seemingly heroic tale is told. Is it to be told through the lens of a nationalist hero, of someone who held on to his work no matter what? Or is it to be told as a cautionary take on the suspended danger of delusion? For Onoda chooses to take no sides, and accounts for a particularly unresponsive direction of the proceedings. One would also expect that coming to a director who has had no direct connection as such to the material, would pave way for an unapologetic and unburdened take on such a cultural figure, but Harari carries weight from the get-go, that is hard to digest after a point of time. There is a difference in the way the film places the reality of its character and chooses to be on his side. It chooses to be an apocalyptic war drama when in reality, it transforms into existential, absurdist humor. It does not get well.

Onoda’s conflict is at the end of the day, a self-regulated one. His idea of war is so ingrained in his mind that he cannot imagine a reality without it. Played as a young man by Yuya Endô and as an older man by Kanji Tsuda, Onoda is recruited as part of a base-level soldier, and sent to the island of Lubang in the Philippines. He is instructed to use “guerilla warfare” with a bunch of soldiers as a means to destabilize the foreign occupants until his own force rescues him. This doesn’t bode well, as the rest of his team members are not as blinded by duty as he is, and they either end up running away or giving up in the process. Through a glacial pace, Onoda traces the perils and anxieties that lurk at every corner as our protagonist embarks on this task. Parallel to this runs the track in the 70s where a Japanese tourist is in search of Onoda, to tell him the truth and bring him back to his home. 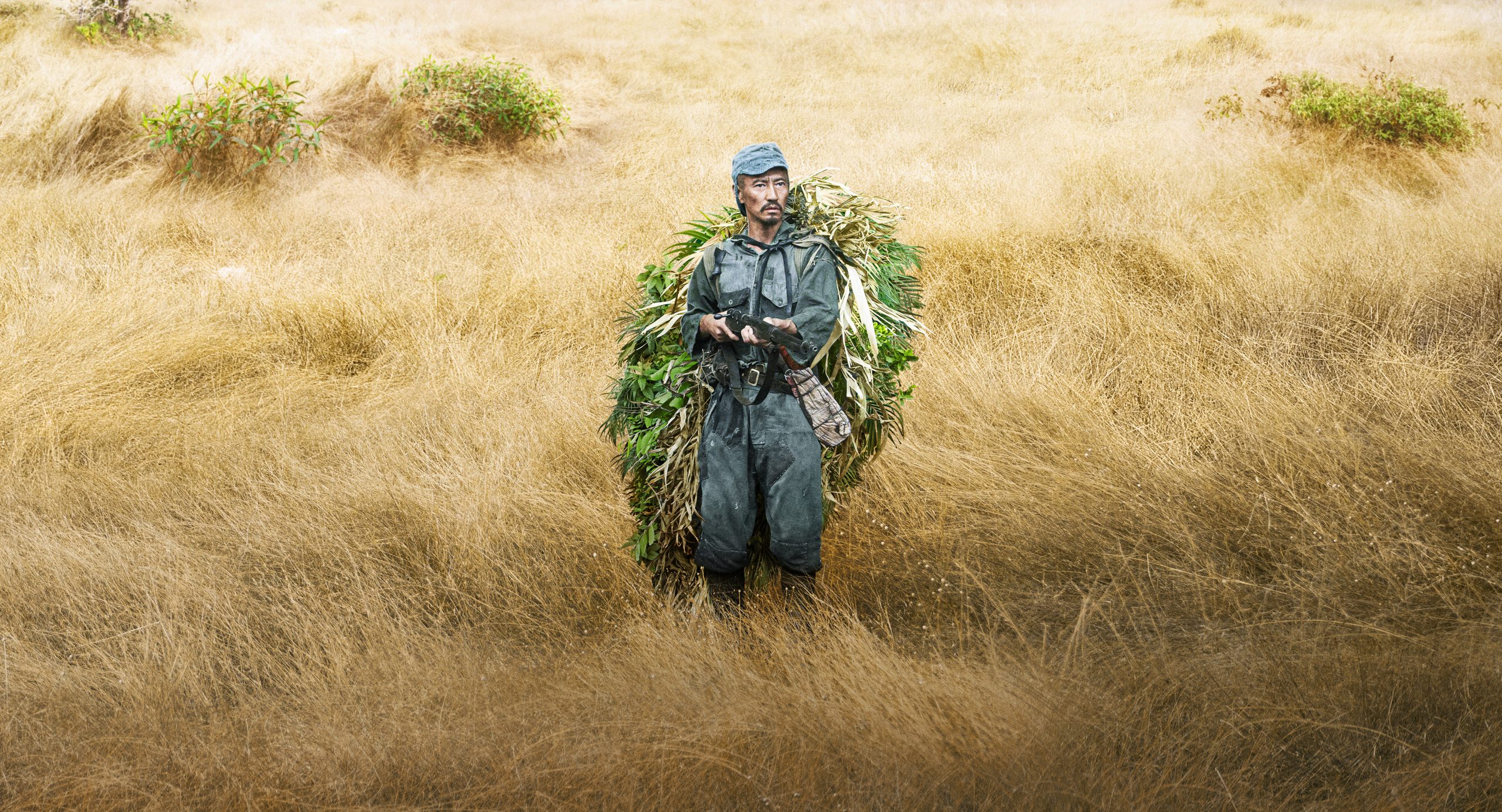 Onoda is darkly funny because at the onset we know the futility of such a mission that our protagonist takes on, and also adequately thrilling for its attention to detail. The performances of Yûya Endô and Kanji Tsuda are finely tuned and expertly manage to sell the shifting gravitas of the main character. The seriousness and stubbornness of Onoda is what the narrative ultimately holds onto, and it is slightly baffling that the film takes three hours to clock his journey and yet aims at no resistance to the pitfalls of such conspiracy. We are kept at tenterhooks when Onoda and his team try to decipher what they believe to be a secret code, but we see the larger picture and the characters do not.

Just like Onoda, the film also fails to see the truth that lies ahead. Are we supposed to emphasize with Onoda when he repeatedly self-imposes his own convictions and ends up more deluded? It reaches the saturation point midway, where Onoda feels overwrought and needlessly pressing. It portrays the absurdity of the situation elaborately, which quite frankly begs the question- why? The film simply chooses to ignore the topical implications of this story, currently when the world is immersed in the deafening echoes of isolation post-pandemic.

The Midnight Club (Season 1): Review, Recap & Ending Explained - Will there be a Season 2?