Kakekomi is quite the experience, and if you can push through being told exactly how things are in the first 30 minutes or so of laying the ground rules for the world you are taken in, you are in for an interesting ride through a strange time in Japanese history - to say the least.

Kakekomi (2018): A tale of oppression, endurance, and refuge

For someone who hasn’t seen much of Japanese Cinema or attended any Japanese film festival – I have only seen Kurosawa’s Dreams really – this is quite a shocking and intense experience. Kakekomi (2018) or “Runaway women” is a historical drama directed by Masato Harada. It follows the story of women fleeing their oppressive environments and seeking refuge at a Buddhist temple.

The Buddhist temple is Tokeiji or the mountain as they call it. I have to say that when I first watched the film, I wasn’t as taken by it as I am now. After reading about the history and the stories behind this piece of historical fiction, and noticing the references laid down by the director all through the film, I am more impressed.

After some research online, I learned that the temple had a nunnery that was built as early as the 1200s mainly as a refuge for women seeking a divorce from oppressive, abusive marriages. I was honestly quite surprised at how progressive that was for the 1200s. Before delving into the story and plot, I have to say that the music by Harumi Fuki, was one of the main highlights for me – bringing elements of Japanese and western music hand in hand helped pave the way for the contrasts in the storyline.

Harada also did a beautiful job along with his cinematographer Takahide Shibanushi in framing and choosing pale color palettes to reflect the mood of the film. Harada used slow motion only a couple of times – I am a huge slow-mo fan though – to bring out poetic contrasts specifically in fight scenes.

The story begins in 1841, in Eda, a place where oppression and patriarchy are the norm. Women are either wives or mistresses, in both cases oppressed and treated as objects, means to certain ends – depending on the role they took up or were thrown into. The film kicks off with a brutal scene of women being beaten up and dragged across the streets, laying the ground for what Eda is all about.

The camera sways through the streets filming a man singing and dancing around, in contrast to the women being punished for merely performing songs on the street. You see signs and people talk about banning music, poetry, books, bright colors and.. well, Christianity. 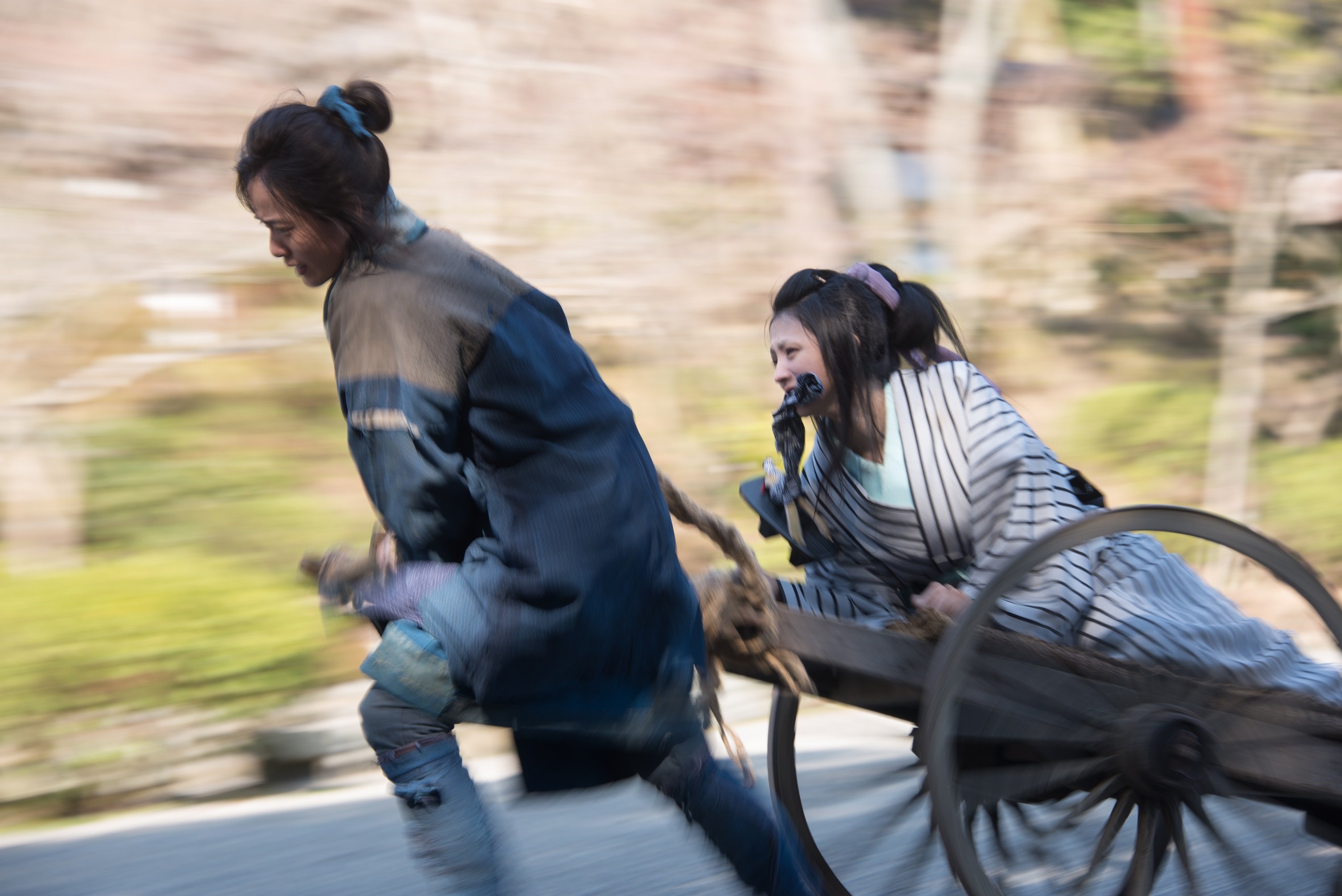 The whole film works on contrasts, whether it was intentional or not is irrelevant. The film is first based in Eda where women are oppressed, then women run away to the temple where they are almost banned from seeing men for 2 years until their divorces are finalized. The two women that story follows, were at the opposite ends of the equation: a wife escaping her husband’s mistreatment and adultery with his mistresses, and a mistress escaping her “master’s” corruption.

Contrasts are also built on inside Eda where there is no singing or music or poetry, whilst in Tokeiji, they talk on and on about books, poetry, they tell their stories and women learn to fight. The film’s narrative itself turns from drama to subtle comedy after the women manage to escape to the temple and meet a writer/medical student who also escaped to be able to write his next novel.

I think also one of the main elements that really hit me in the film was how art, stories, and fiction helped them endure. On several occasions, we have the writer/poet saving the day by telling fictional stories either to scare oppressors away or to calm them down and put them at ease. We have one of the women, the mistress, and her desire to read at her deathbed.

The film also pays unmistakable tribute to author Takizawa Bakin who wrote an epic Japanese novel in 106 volumes, titled “The tale of the eight dogs”. The novel was quite the hit at the time, first published around 1814, but of course, was banned in Eda according to the film along with almost all literature. The novel was inspired by another Chinese epic, which made it unacceptable in Eda.

Characters were all “stuck between the past and the future but were always pushed forward” as Author Bakin states in one of the flashbacks. Every woman, every Kakekomi, had a back story that she gets the time to tell. We are taken several times back to see their lives, before and after the oppression of Eda: stories of both pain and endurance, stories of how they waited until they couldn’t take the oppression anymore and sought refuge as a final solution.

Grown-Ups (2022): ‘NYAFF’ Review: An Insidious Blow to the Core of Clichés

The writer, played masterfully by Yo Oizumi, was the most imaginative of them all – there were scenes almost transformed through his eyes, shifting perspective at times from brutal violence to melancholic beauty. Erika Toda and Hikari Mitsushima did a great job in portraying the two women seeking refuge and Kirin Kiki (who is starring in Shoplifters, this year’s Palme d’Or winner) was also brilliant as Genbee. 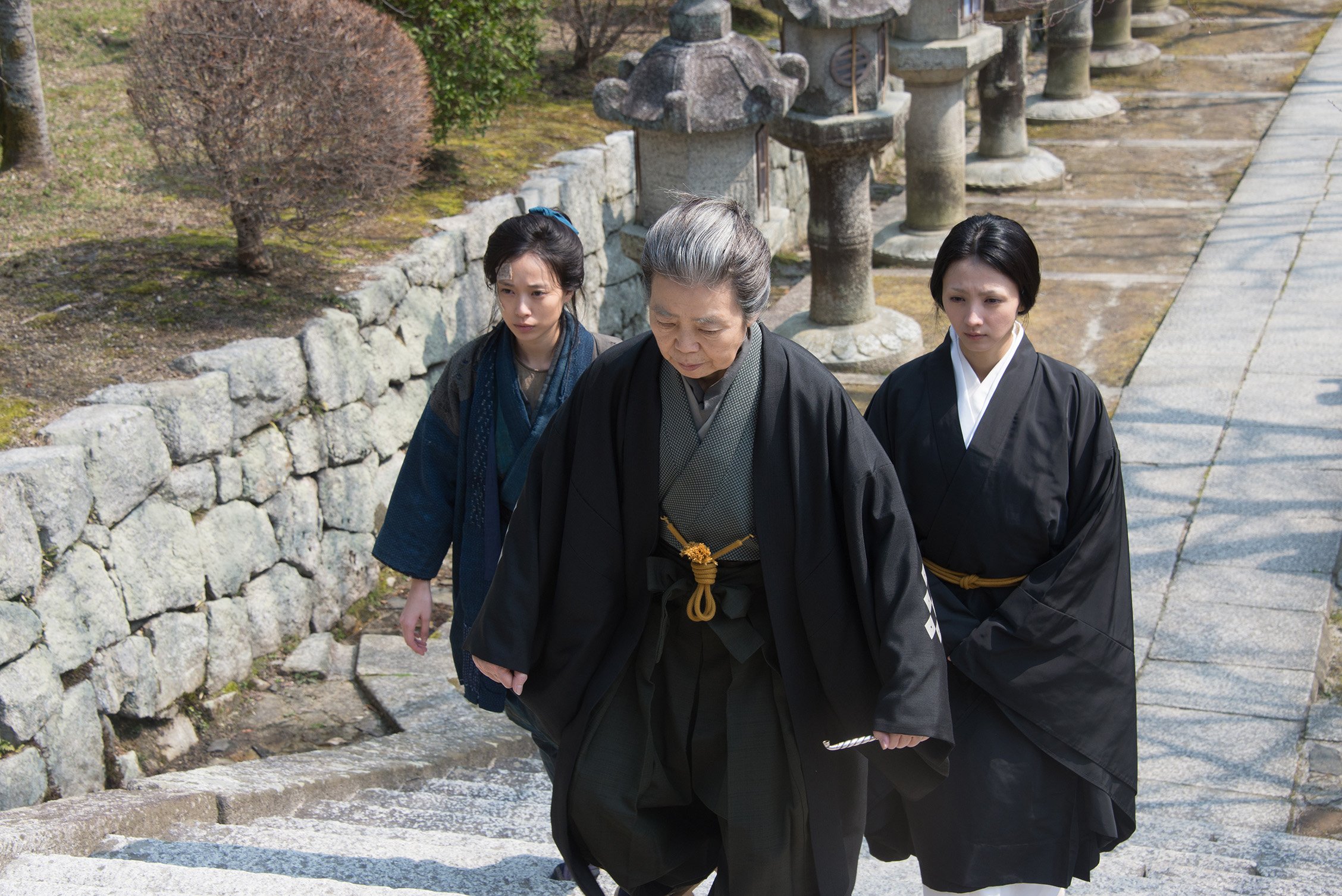 Kakekomi (2018) is quite the experience, and if you can push through being told exactly how things are in the first 30 minutes or so of laying the ground rules for the world you are taken in, you are in for an interesting ride through a strange time in Japanese history – to say the least.