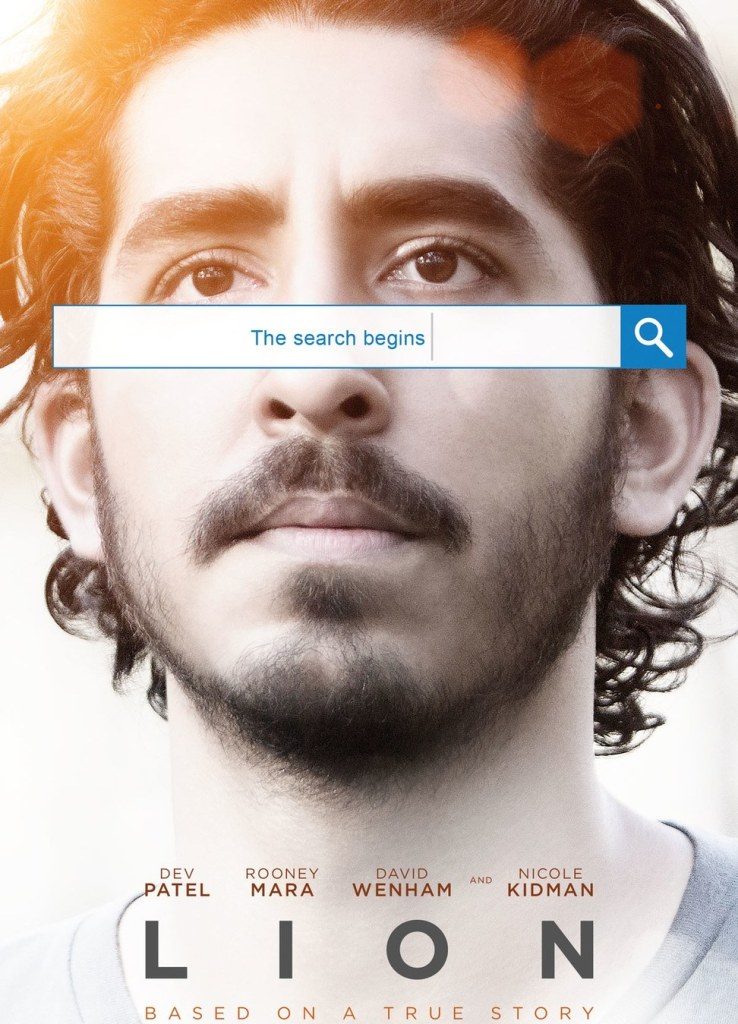 At first glance, Garth Davis’ feature-film debut Lion (2016) seems to be a repeat of Danny Boyle’s Slumdog Millionaire (2008) and Manikandan’s Crow’s Egg (aka Kaaka Muttai, 2015). A small, vulnerable boy running through the poorest streets of India that’s tailored for Western audiences have proven to be either exploitative or unabashedly mawkish. Of course, Lion is based on the incredible true story of Saroo Brieley (based on Saroo’s memoir ‘A Long Way Home’). Yet, on-screen it could easily come off as a formulaic underdog tale; the harsh everyday reality of impoverished, brown-skinned children utilized to satiate Western viewers’ melodramatic movie diet; or a crowdpleaser for sophisticated, urban Indians to shed a tear or two for the ‘other’ Indians. And so, after confining some of my skepticism, I finished watching Lion. It certainly has the familiar narrative beats, engineered for the awards season. But Lion is far from being a bad or insensitive film. Director Garth Davis has firmly invested himself in Saroo’s harrowing journey that he is able to avoid sentimentality at some of the key moments.

‘A Long Way Home’ was first brought to the attention of Australian producers Iain Canning and Emile Sherman at Sundance Festival, back when their superb crime series “Top of the Lake” debuted. Garth Davis was co-director of the series (created by the great Jane Campion). Davis took over the reins to direct his first feature film and brought in Luke Davies – novelist/critic-turned-screenwriter (Davies wrote the distressing tale of heroin addiction “Candy”). After meeting with Saroo, his birthplace, mother and adopted parents, the director decided to tell the tale in the linear order. It’s a decision that works very well for Lion. Despite having a cast of well-known actors (Dev Patel, Nicole Kidman, Rooney Mara), the first 50 minutes is devoid of recognizable actors (except for Nawazuddin Siddiqui’s underwhelming cameo). In fact, the first-half involving the kid Sunny Pawar as Saroo is so raw and powerful unlike the star-studded second-half. 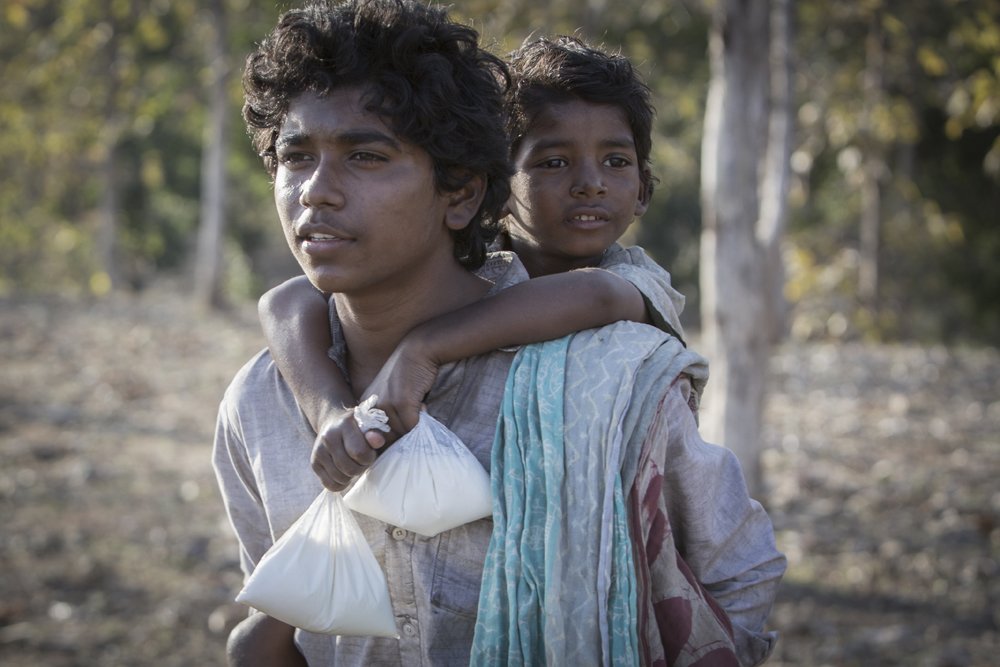 In one elegantly visualized scene, five year old Saroo wakes up inside a decommissioned train. It’s somewhere between Madhya Pradesh and West Bengal. The boy is separated from his beloved elder brother Guddu (Abhishek Bharate). Saroo panics, presses and kicks at the door, and then loudly screams as the iron beast encloses his screams with its whistle. It was a strong moment. The entire first-half is littered with such moments. It showcases the journey of the impoverished, winsome kid, who gets separated from his affectionate mother (Priyanka Bose) and brother. The train leaves Saroo at Kolkatta, 1,500 km away from his home. Facing the forest of moving trees (adults in the station), he climbs up an iron post and tearfully calls for mom and brother. The human traffickers, the Howrah Bridge, the rusty, state orphanage and its indifferent guards, Saroo confronts big, rigid structures and immovable hearts. Saroo’s vulnerable state is exhibited in a restrained manner, giving ample space for viewers to invest themselves in the journey. Even an act of mercy from a by-stander and social worker doesn’t drip with cutesy elements. Moment by moment everything unfolds naturally without didacticism or voice-overs.

The orphanage finds an adoptive home for Saroo at Australia. A well meaning suburban couple (Nicole Kidman & David Wenham) adopts him, and later a much emotionally distressed kid named Mantosh. The story then flash-forwards 20 years later as adult Saroo (Dev Patel) emerges from the sea, his heart at peace. He joins a business school and the time away from adopted parents propels Saroo to wonder about his forgotten past. The adult Saroo becomes a lot more of a dejected soul than his younger-self. As Google Earth comes into play, the narrative loses its organic nature to shoe-horn some clumsy elements. It becomes a touch too understated to push the organic flow of emotions into a frozen state. Gradually, it moves into formulaic territory with fierce intent to explain the emotions. The simmering emotions as Saroo eventually reaches the destination of his quest were fascinating to behold. But, by the time it reaches that part, the film has undeniably lost the sharpness & charm it withheld in the first-half. 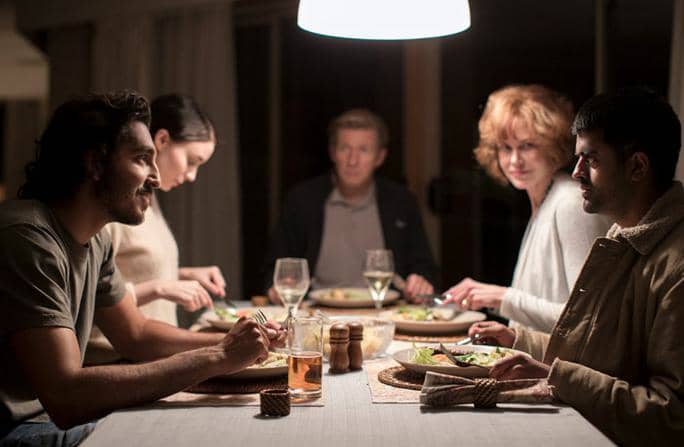 There’s lots of interesting imagery in Garth Davis’ adept direction. For example, the camera flying over series of landscapes in the opening sequence becomes a sign of Saroo’s future quest. As I mentioned earlier, Davis impeccably exhibits the vast space around Saroo to suggest his smallness and vulnerability. Director Davis does take some obvious missteps in the second-half. He relies too much on flashbacks and visions to convey Saroo’s inner torment. A visual of ‘jalebi’ isn’t enough to exhibit the emotional trigger of adult Saroo; the earlier scene is replayed to not miss out on the emotions. Dev Patel’s Saroo isn’t firmly realized to makes us more invested in his quest. And, Nicole Kidman’s mother character isn’t profound enough to move us when Davis goes for a close-up as she talks about her emotional pain (however, she was so good in the dinner-table scene). The intimacy between Saroo and Lucy is visualized beautifully, but once again it lacks the emotional force. As director Davis and writer Davies oscillates between too much of restraint and too much of mawkishness, the narrative momentum gradually weakens. Nevertheless, all such imperfections end with a well-staged, emotionally resonant climax. The 30 year old Saroo once again walks through the dust-covered streets of his village. It’s a walk where his tormenting old memory connects with the real geographical land (far different from the blurred images of Google Earth). The ensuing catharsis genuinely warms our heart. Saroo’s quest may be totally unsurprising for us, but at that particular, lingering moment we are able to put ourselves in his shoes and feel the emotions that stirs him. Despite the flaws and conventionality, the Lion’s roar could be heard in those moments.

Despite a sagging second-half, Garth Davis’ charming debut Lion (118 minutes) offers an undeniably moving movie experience. It’s watchable for the way Davis plays some of the familiar notes to an astonishing effect.