With over 110 film appearances spanning through a 38 year long acting career, Nicholas Cage is undeniably one of Hollywood’s busiest actors. His acting performances have always sat at the sweet spot brilliance, controversy and unmatched originality. 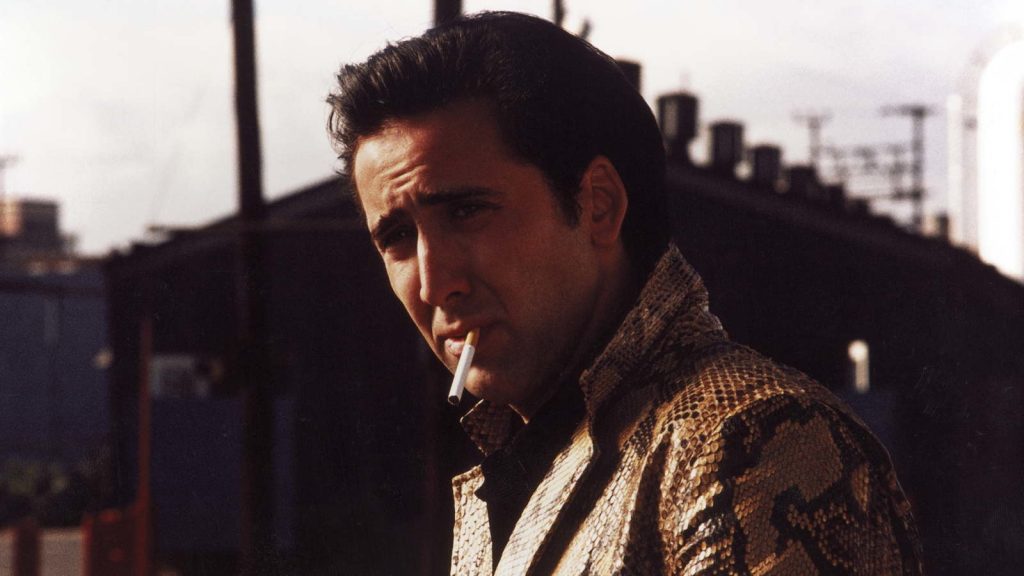 Featuring a truly unique collection of authentic, raw cinematic talent, Wild at heart is an R-rated surrealist black comedy crime film directed by none other than Mr. David Lynch himself. Starring the champions of weird, yet brilliant craft, Nicholas Cage and William Defoe is a wizard of Oz-like joyride where the acting talents of Nicholas cage come to shine. The film has split critics, however, for the lovers of the grotesque, Wild at heart is an Americana road trip where we experience Nicholas Cage in his finest – hyper-emotional, unpredictable and horrific. 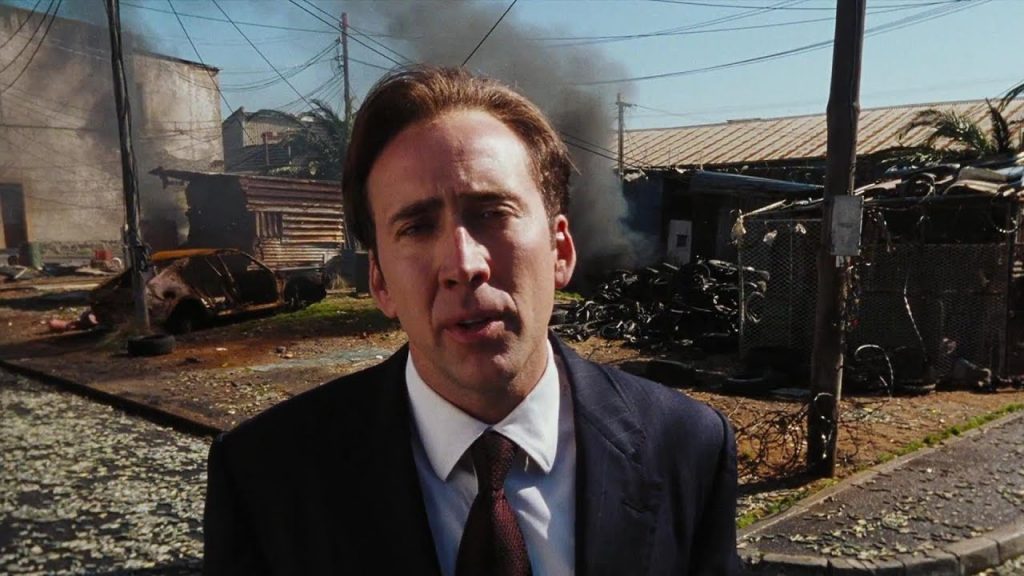 Lord of War is a crime drama film starring Nicholas Cage, Jared Leto and Ethan Hawke where Yuri Orlov, played by Nicholas Cage enters the underground of arms trade and sells guns to all sides throughout global terrorist conflicts an civil wars. The film serves as a wake-up call that challenges its viewer’s stance on issues such as gun policy regulation, production of weapons and the ugly realities of war profiteering. Cage’s character is partially based on Viktor Bout, a real-life arms trader and deals with the complexities of a character stuck between doing what he does best while developing struggling with guilt over the consequences of his line of work. 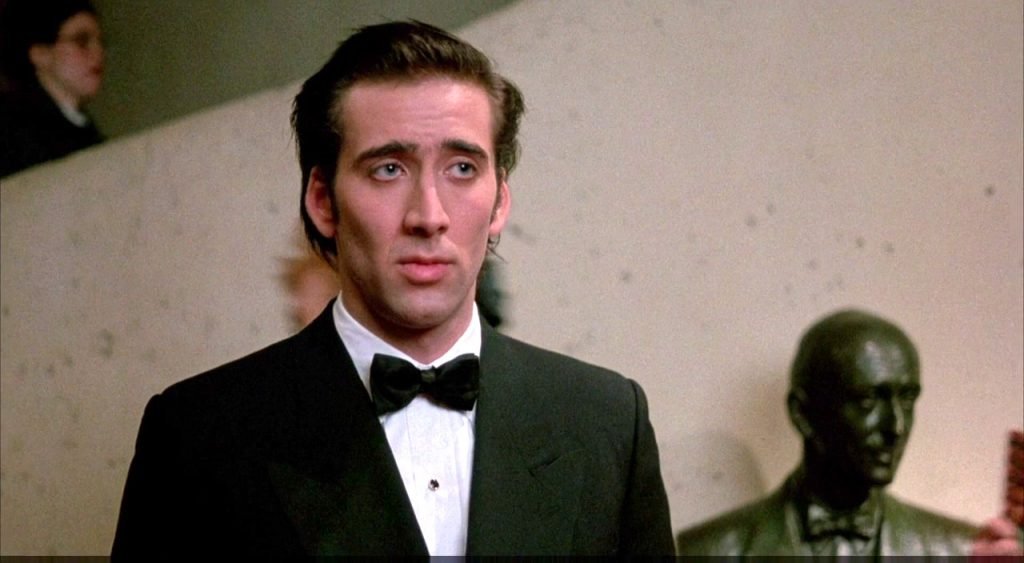 Moonstruck is a romantic comedy/drama that coupled Nicholas Cage with none other than Cher and as a result, bagged 6 Oscar nominations and 3 Oscars. The film has earned a high mark of 83% on Metacritic and a 93% approval rate on Rotten Tomatoes. Cage plays an abusive alcoholic that masterfully shifts between drama and comedy and is nothing short of outstanding for a unique young actor just 5 years into his career. The film is a comedic tribute to the dysfunctionality of love affairs and romantic relationships and is not to be missed on any Nicholas Cage list. 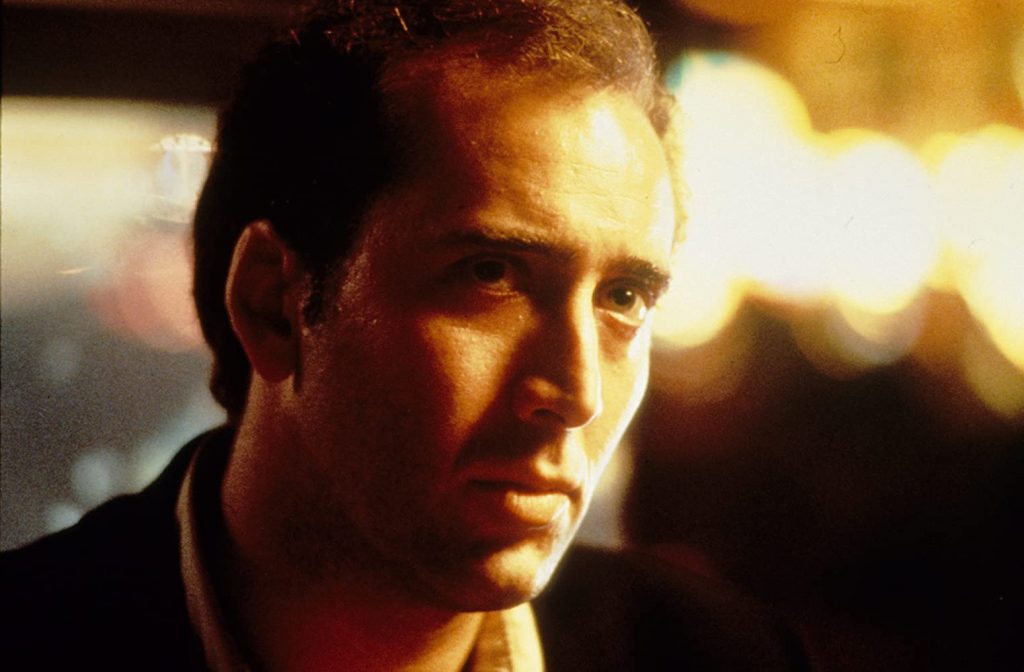 The only remaining film that won Nicholas Cage an Oscar for the best male performance, solidifying him as an actor and placing him in the company of heroes, Leaving Las Vegas tells the story of a screenwriter who is blacked out drunk, hungover, or otherwise through almost the entire film. In its essence, the film tells the story of accepting somebody for who they are and Cage’s hyper-emotional performance is the perfect medium for the character of Ben Sanderson, the man bouncing back and forth between losing everything and finding beauty in the rare and unexpected, such as falling in love with a prostitute. 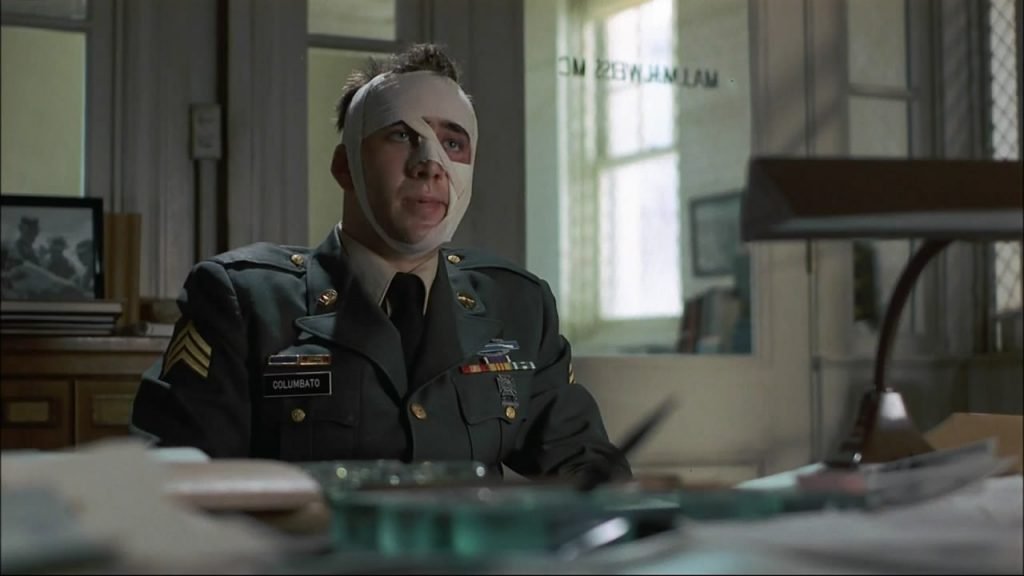 Criminally unknown, Bridy stars a young, hungry and ambitious Nicholas Cage clawing his way to the golden gates of Hollywood. The film tells the story of a friendship between Birdy and Al, two boys charging through life which is told through flashbacks to push a narrative of destroying one’s life by going to war. Nicholas Cage delivers one of the finest acting moments of his career as a man who lost everything in Vietnam and tries as best as he can to grab hold of the precious little he has left, his sanity and personhood. Additionally, Birdy is arguably the only film where we see Cage’s undeniable chemistry with a male cast member. 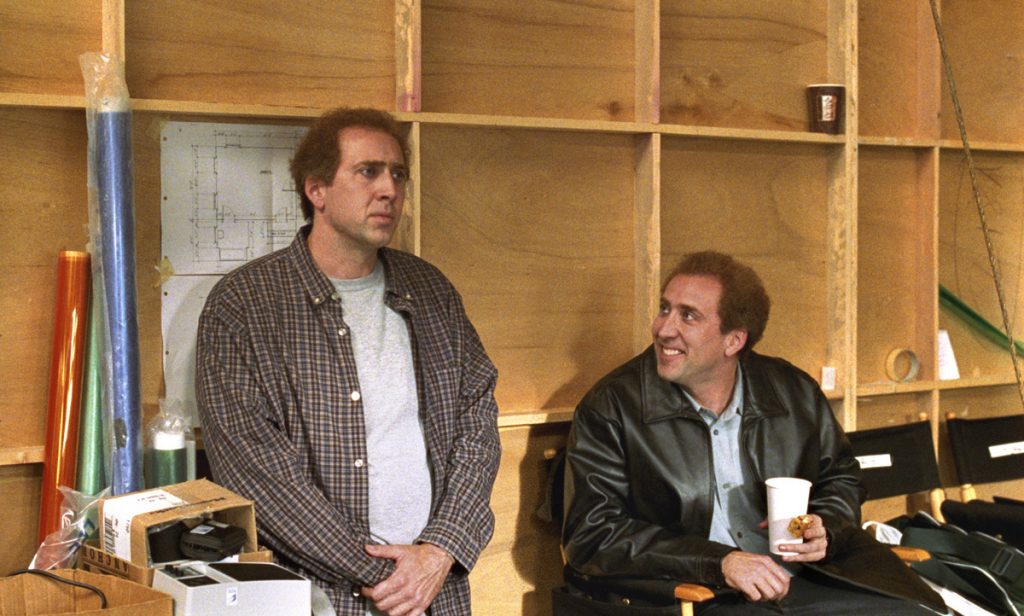 Adaptation is basically a film in which Nicholas Cage’s co-star is Nicholas Cage, which means you get to enjoy a double Cage performance wrapped in one motion picture. The story is a dramatization of Charlie Kaufman’s way of life where he has to write a game-changing screenplay and turn his luck around. However, the film approaches the multiple personality narrative by creating a second character, an actual, physically existing twin brother which is the mirror opposite. Adaptation is a 2000s era Cage classic, where he masterfully demonstrates playing 2 different roles in the same film and as a result, fully delivers. If you won’t take our word for it, just think about the 83% Metacritic score. 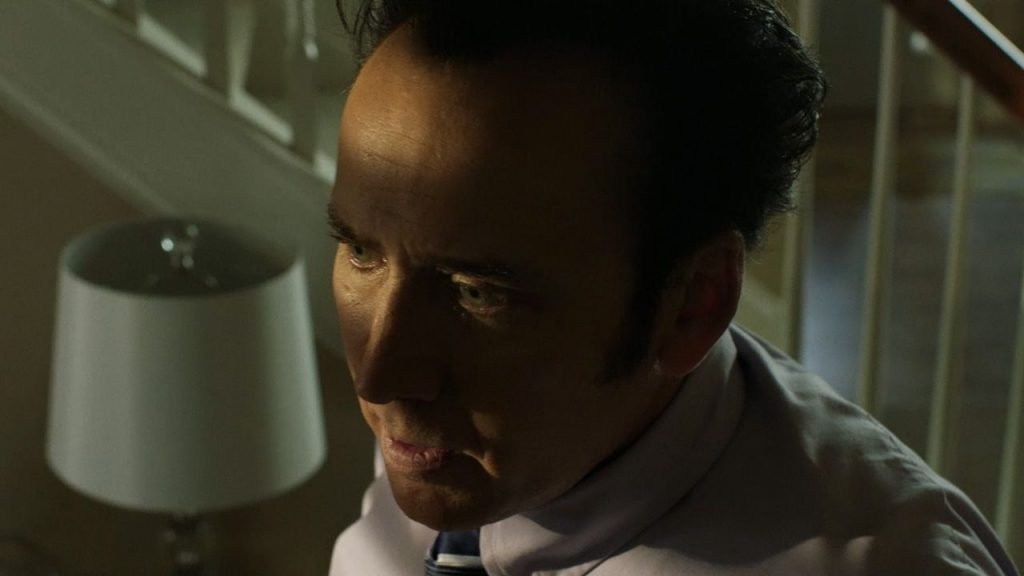 Mom and Dad is a film where suddenly and out of the blue, a sort of pandemic breaks out, which causes parents to urge to kill their children. Nicholas Cage plays a loving father who found himself and his wife obsessed to kill off his younglings in the most brutal ways imaginable. This black comedy illustrates the stress of having children and the intergenerational conflicts that are bound to emerge between parents and their kids as a result of living and growing up in different times. In one scene, Cage perfectly and masterfully describes the rude realization that one is no longer a 20-something year old with the whole world ahead of him but bound to his family and the obligations the family life brings. Nicholas Cage’s acting has instrumentally captured the moment when you open your eyes to a rude awakening that life has passed too fast, before getting up and going to kill his own children in the manner of a true black comedy family film. 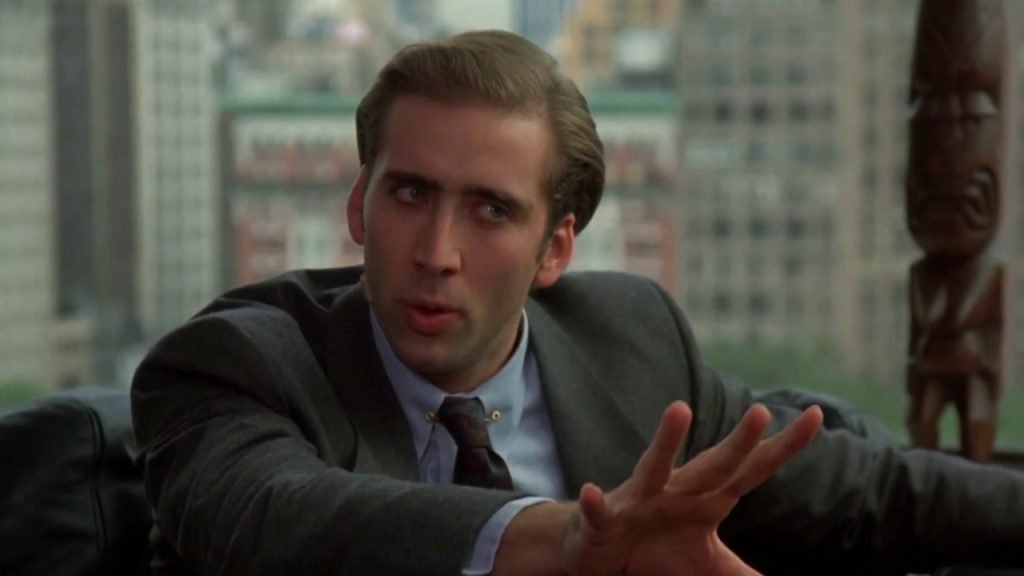 Vampire’s Kiss is hailed as a landmark bad performance by Nicholas Cage which spanned his iconic alphabet metal breakdown scene. However, a closer look under the magnifying glass reveals quite the opposite. Cage plays a successful literally agent living the Vida Loca that becomes conceived that he is turning into a vampire. Cages’s character of Peter Loew in many ways is the opposite of Christian Bale’s Patrick Bateman; American Psycho is a classic antihero film, however, Cage’s portrayal of Peter Loew is the anti antihero to Bale’s Bateman. It invites us to explore the negation of the negation of a hero, something that’s hardly ever (or even never) been done in cinema history. Additionally, Vampire’s Kiss is the first film that made Nicholas Cage an acting force of nature to be reckoned with and started his iconic, over-the-top acting performances. 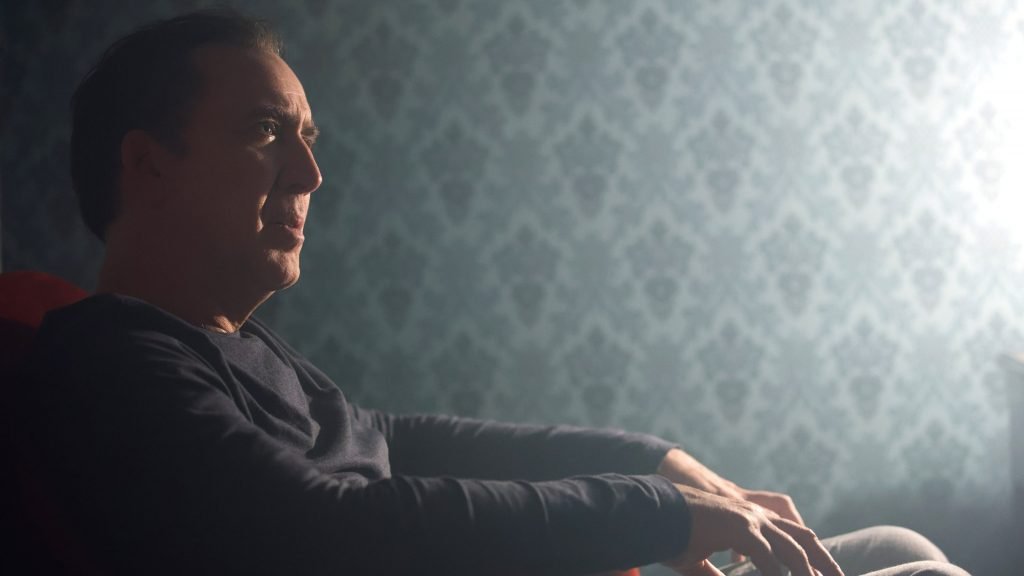 The horror genre is no stranger to H.P. Lovecraft-inspired narratives over the decades, however, there have only been a handful of true adaptations of his stories. Color out of Space here stands as a prime example of how to adapt Lovecraft’s horrifying tales of cosmic horror and why this source material is perfect for the age of visual horror and innovation the genre has seen over the past 5 years. This film is an instant contemporary horror classic and its ascent into cosmic nihilism and Lovecraftian madness couldn’t have been done without Cage’s phenomenal performance. If you’re up for a fresh slice of dread paired with Cage in his prime, Color out of Space is your cup of tea.

Mandy is not only Cage’s performance of a lifetime but is also a film that captures the essence of his acting and proves that there is a method to his madness. Set in an incredible LSD heavy metal surreal environment, Mandy features Nicholas Cage as Red Miller, the man out to hunt and destroy a Christian cult and a mutated biker gang that slaughtered his girlfriend and burned her alive in front of him. Not only that the film achieves an unmatched visual aesthetic that is a perfect blend of modern and retro, but it also masterfully shifts between a slow burn and faster-paced horror galore. Mandy manages to be revolutionary and classical at the same time and Nicholas Cage embodies the vessel for the plot. After watching this film, it was hard to tell whether Cage was born to play this part or that the part was written especially for Cage to play. Aside from Cage’s 10/10 performance, the film is a cinematic experience that proves the 2010s were THE golden decade for the horror film genre in which Nicholas Cage has left a mark not only once, but twice in rapid succession.

Nicholas Cage is an actor that makes strong use of improvisation and body language throughout his performances to the point that filmmaker par excellence David Lynch has called him the “jazz musician of acting.” To be fair, Nicholas Cage has had his fair share of bad films and questionable performances, but to the films that capitalize on his out-of-the-box acting style and use it to deliver a compelling, immersive narrative, Nicholas Cage is a by far and wide, a quintessential asset.

The 15 Best Movies About the Working Class