Legendary explorer and oceanographer Jacques Cousteau once remarked, “From birth, man carries the weight of gravity on his shoulders. He is bolted to earth. But man has only to sink beneath the surface, and he is free.” Writer-director David M. Rosenthal’s French sports drama No Limit is about two deep-sea divers who found liberation and relief from their dark past and disheartening life experiences through diving. Originally titled Sous Emprise, it is loosely based on the life of the French freediver Audrey Mestre and her relationship with her husband, the champion Francisco “Pipin” Ferreras. Though the film is a tribute to Mestre, who died attempting to beat the world record of 171m, it exonerates itself by reminding us that it is a work of fiction.

No Limit is a sexually charged, suspenseful romantic drama about unhealthy competition and obsession with winning in an extremely high-risk sport. It also deals with the dark side of toxic love and dangerous relationships that dives into jealousy, controlling behaviors, and abusive and manipulative tactics. Starring Camille Rowe, Sofiane Zermani, and Cesar Domboy in the lead roles, this visually striking film examines the power dynamics existing in asymmetrical relationships, hypermasculinity, self-destruction, and co-dependency. 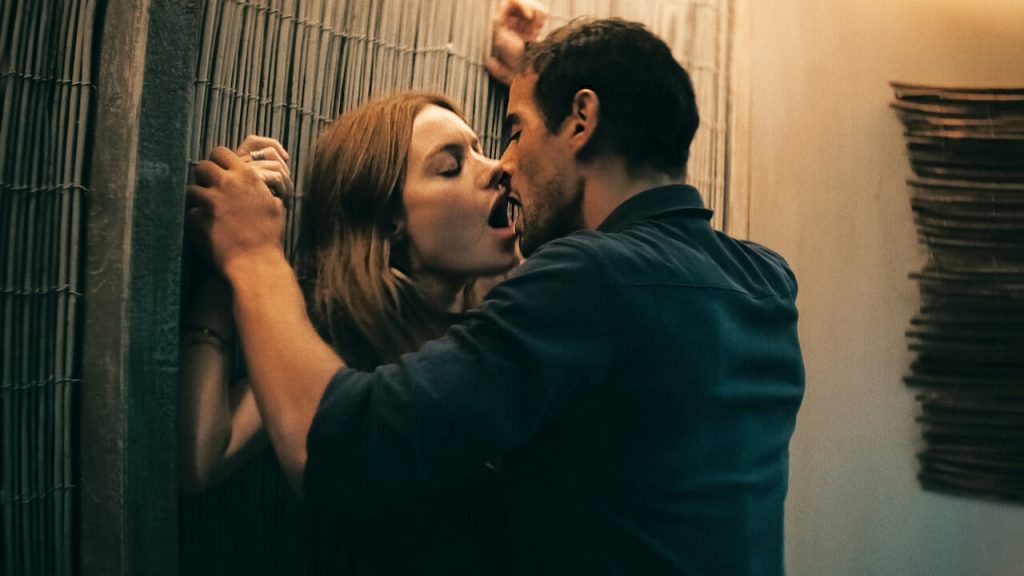 The film commences with somber music and enthralling visuals of the vast sea. The camera then shifts to a young girl standing alone on the beach, looking out into the open ocean with deep scars from previously slit wrists. She is greeted by her grandfather, who hands her diving gear. She dives into the water and swims alone underwater but then rises out of the water slightly older, signifying she has been diving all her life. We are now introduced to Roxana (Camille Rowe) as a student of marine biology in college. One weekend, she decides to take a freediving course in the south of France and meets her diving instructor and world champion freediver Pascal Gauthier (Sofiane Zermani), with whom she has an immediate and intense sexual chemistry.

A womanizer at heart, Pascal does not even find his girlfriend as a deterrent before he engages in fiery sex with Roxana. After his girlfriend breaks up with him, Pascal and Roxana fall in love as they both share a passion for freediving. She becomes part of the diving team having the best time of her life. For Roxana, the quiet tranquillity she experiences underwater lets her forget the trauma of losing her father, who took his own life. For Pascal, diving is a means by which he can succeed in life and escape the memories of his tough childhood and dysfunctional family.

Roxana decides to drop out of her studies and travel across the world with Pascal from one competition to the next while he continues to break new world records. However, when Pascal starts to suffer from blackouts and is advised to stop diving, he introduces Roxane to the world of freediving. A physiologically gifted Roxana quickly sets a new record for French women by diving 56m deep and is celebrated by the media for her talent and achievement. With Roxana’s rise to fame and Pascal’s fading significance since a woman beat his record, he becomes jealous of the attention she is garnered with. The green-eyed monster takes control of him, turning him into a manipulative and deceitful individual, ending up causing a disaster no one anticipated.

In contrast, Roxana is strong despite the emotional baggage of her past experiences. She is constantly thriving to make her own place in the world and let go of the past. The parallel made between their toxic relationship and the death-defying free-diving foreshadows the catastrophic finale.

The most striking element of this mildly interesting narrative is its stunning cinematography, especially underwater diving shots. Thomas Hardmeier strikes a stunning balance of light and color to capture the visually resplendent images of the infinite expanse of the deep waters. It is fascinating to see the bodies diving into the water, the bubbles rising to the surface and the ray of sunlight penetrating the surface and slowly fading into the depths of the sea. Though it is instructional, the film allocates a lot of time to explain the pitfalls of this risky sport, the physiological requirements for safe diving, and the precautions to be taken by the team before diving. Some of the scenes tend to become repetitive, thus clocking the duration at one hour and fifty-eight minutes.

Irrespective of its interesting backdrop and visually striking imagery, the film is underwhelming as it takes its sweet time to show its exposition and rising action. The flat characters and slow showcasing of subtle character development refuse to provide an intense and palpable narrative. Though Roxana and Pascal have their own tragic and troubled past, we find it difficult to connect with their emotions from time to time. The performance of the lead characters is decent in this sexually driven film that portrays the power dynamics of opposing personalities. The balanced alternation between above and below the surface contrast the intricacies of the life above the surface and the peaceful nature of diving underwater.

At the beginning of Sous Emprise, a professor of Roxana, reflects, “Above, we have land, air, sunlight. Below, the aquatic universe, depth, and pressure. The deeper you sink into this world, the darker it gets and the more hostile.” When Roxana dives deeper into male-dominated diving, she witnesses the uglier and doomed side of this daring sport that pushes her into oblivion.

Where to watch No Limit