“Sorry To Bother You” is the most inventive and original screwball comedy since Swiss Army Man. It’s a satire on modern life, its inescapable slavery circles and the surety with which it waters down the personality and perceptive power of a person. In digging deeper into the relationship we have with our social circles, it offers a biting commentary on the relentless, callous corporate world that is always waiting to suck the life out of people in the name of a being able to forge a tangible career.

The film is bursting with ideas that often drifts in surrealism to make it a lot more tangible. It audaciously shows the widening inequality and instability plaguing the modern day society. Never underplays the idea and present them in a cynical and funny way. Writer/director Boots Riley pulls no punches in his seamlessly layered narrative that simmers with 21st-century problems like capitalism, racism, false hope, schadenfreude and consumerism.

Riley sets the film in an alternative present-day version of Oakland but a little tweak to the real world, and welcome to Riley’s smart, explorative and almost dystopian setup. Cassius Green (Lakeith Stanfield), a 30-something black guy with low self-esteem is often thinking about sun explosion and existentialism. He bunks in his uncle Sergio’s garage with his sign-twirling gallery artist girlfriend, Detroit. Detroit is a part of a radical group called “The Left Eye” that revolts and vandalizes advertisements against a big corporation WorryFree. 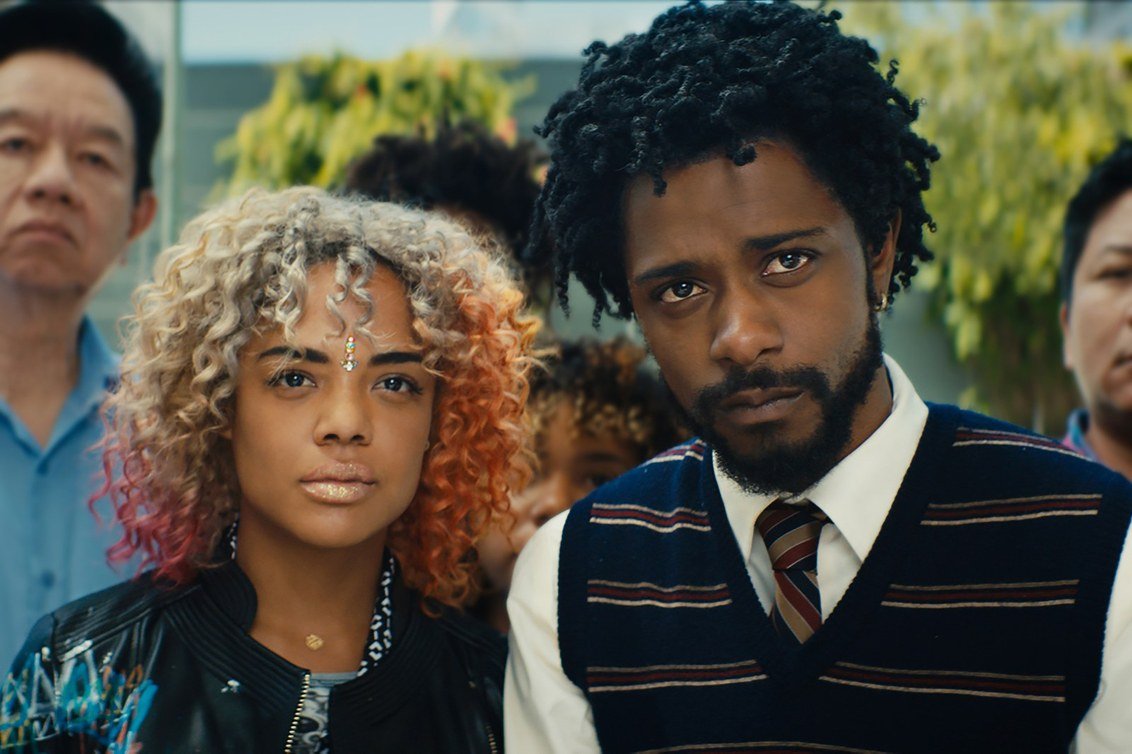 Cassius lands a job in a telemarketing company and cracks the conundrum of selling to customers with his magical ‘white voice’ adopting the code-switching method. Does it remind you of Jordan Peel’s Get Out? The similarity is uncanny that ends here, though, the “white voice” draws how the white fascist privilege still exists in society and deemed as a confident and carefree character.

He soon rises through the ranks to the elite team of his company that sells wicked products and services. It takes a jibe at the corporate culture of ‘secondment employment’ when the leader of the elite team informs about selling manpower. The culture of ‘outsourcing’ the employees is prevalent today, and if we really think of it, employees are treated as a commodity rather than humans when it boils to down to Business.

Though reluctant to join initially, the fat paycheck lures him to take you the job that could take care of his financial problems. He is offered a luxurious Power Caller suite and buys a premium car. After attaining the financial stability, he instantly sidelines himself from a union demanding for raises among the telemarketing staff. But the things go Pete Tong when Cassius attends a party of coke-snorting and orgy-hosting entrepreneur Steve Lift (Armie Hammer).

Steve Lift would be an obnoxious birth child when the stubborn capitalist fucks the optimistic opportunist. He is your typical tyrannical leader surrounded by half-naked girls for his amusement. His company, WorryFree, offers a life free from paying bills and with free food and lodging, but at the cost of a lifetime work contract. In the real world, the scheme is not much different. The only freedom is to choose the company to offer your slavery. Steve has some disturbing ambitions for Cassius, and the cost of success could be more than just alienation from both his colleagues and Detroit. It leads to the breakdown of consciousness for Cassius and his moral awakening.

Riley goes with guns blazing to rip apart the capitalist and consumerist ideologies while flirting with other subjects on its surface. The absurdly funny undertone of the film keeps the profound philosophical ideas vigorously simple and accessible for casual audiences too. Though a couple of subplots are diluted and never dealt with necessary seriousness, “Sorry to Bother You” is still an incredible and ridiculously original film that would have you thinking and talking after the end credit.

‘Sorry To Bother You’ WAS SCREENED AT THE 20TH JIO MAMI MUMBAI FILM FESTIVAL WITH STAR Under The ‘World Cinema‘ Section.
CLICK HERE FOR OUR COMPLETE MAMI COVERAGE.

Atlanta (Season 4), Episode 7 Recap & Ending, Explained – Does Van agree to move to L. A. with Earn?