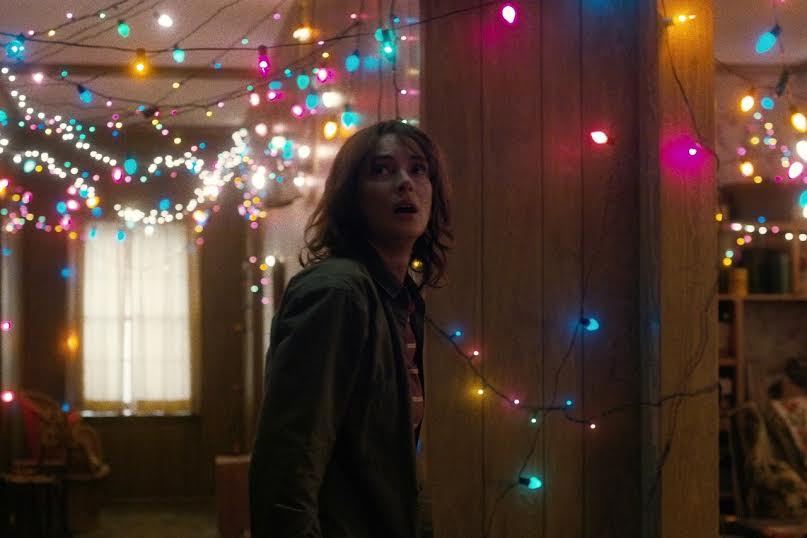 That opening shot which shows the infinite splendor of star-clad, nighttime sky and the dark, deserted corridors of an enigmatic government laboratory, Duffer Brothers’ thrilling Netflix series “Stranger Things” takes us back to the Stephen King and Spielbergian atmosphere, where distinct, otherworldly evils met up with mundane, suburban life. At first look, in the series’ chapter one (‘The Vanishing of Will Byers’), everything looks derivative and characters are prototypical ones or stereotypes. The  kids playing ‘Dungeons and Dragons’, the reference to Star Wars, Tolkien (Mirkwood, Radagaast), John Carpenter’s Halloween, The Thing, King’s IT, Firesstarter Spielberg’s ET, anxious single mother, lone teenager seen as ‘freak’, perfect girl dating obnoxious playboy, walkies-talkie communications, hazmat suits, rec rooms, typical camaraderie, radios, bicycles riding boys being chased by vans and finally the presence of a misunderstood, super-powerful good soul to confront the aforementioned evil alien. If we scrutinize each of these elements closely, it won’t seem to be a paean or tribute, but simply a tedious recreation of the engaging works of 80’s. In that initial episode“Stranger Things”, walks a tightrope between a tribute and plain imitation. However, surprisingly the Duffer Brothers walks elegantly through that tightrope, gradually transcending the bland ‘types’ to characters, with whom we are able to invest our emotions. Of course, “Stranger Things” doesn’t totally cast off its blandness as quite a few elements and characters remains empty till the 8th (final) episode. But, what I liked about this show is the Duffer Brothers’ understanding about the importance of emotional investment than the presence of big CGI scares. Their visuals loaded with adventurous fun and dark allusions gave me immense satisfaction (at least it didn’t look wholly derivative). Most importantly Millie Brown’s mysterious, likeable ‘Eleven’ intrigued and pushed me past the 2nd episode to finish watching the 1st season.

As one could expect, “Stranger Things” has two villains: other-world predator, silently abducting humans, driven by animal instincts; and the cunning, emotionless men of lab, trying to peer through different realms. The first episode sets up the nature of these villains with crisp, intense visuals. Set in the early 1980’s Hawkins, Indiana, we are quickly introduced to the central four preteen characters – Mike, Lucas, Dustin and Will — full of innocence and trust, playing ‘Dungeons and Dragons’ for 10-hours. On the way to home, Will is terrorized by the beast, which earlier escaped from Hawkins’ Department of Energy. Will runs into a shed, near his house, with a loaded shot-gun, but mysteriously vanishes into thin air. Over the next few days, more disappearances and murders happen in the peaceful town of Hawkins, and the government organization covers up the alien beast’s ruination to make all the mishaps look like normal accidents. The three boys, in search for their missing friend, stumbles onto telekinetic powers possessing, nearly mute young girl ‘Eleven’ (Mike calls her ‘El’). She has escaped from the government lab and a restaurant owner, who took her in to give some food is murdered by the government guys.

Mike accommodates the world-weary girl in his house’s basement (concealing the girl from his parents and elder sister). Hardworking single mom Joyce (Winona Ryder) falls apart upon learning her son Will’s disappearance. She and her elder son Jonathan – a loner and outcast – implores the town chief Hopper (David Harbour) to initiate a wide search. Gradually, Joyce seems to sense the presence of Will around her house. Joyce says her boy is caught somewhere, trying to communicate her through telephone calls and electrical light. Chief and others doubt her mental strength as Joyce shockingly witnesses a creature trying to break through the walls. In the other typical story-line, Mike’s perfect, beautiful sister Nancy dates a popular boy and she is secretly loved by Jonathan. The insipid romantic story-line along with the teams of Mike-El-Dustin-Lucas and Joyce-Hopper take different paths and gets conjoined to hunt-down the alien monster.

What I like about Stephen King’s or Spielberg’s adventurous tales is the hope, bravado and trust prevalent among the central pre-teen characters. Their understanding of world’s darkness plus the reluctance to let go of hope and the skeptical attitude to confide things with grown-ups is portrayed in a acute, engaging way that we are taken back to our own 11 year old friendships and vows to protect (absurd) secrets. At that age, as a loner & outcast, I would dream about confronting some super-powerful being, showing abundance of friendship and recognition. Tolkien, King and Spielberg elegantly tapped on to those dreams we possessed in the pre-teen years. As a skeptical adult, nearing 30 years of age, I am able to pinpoint a layer of superficiality imbued in the tales of those imaginative masters. But a man-child, which is still alive within me, sheds joyful tears when thinking about the experience of reading and watching such stories. The unbridled sense of hope that ‘you can face any kind of danger if your like-minded pals stand with you’ is something I only felt in that age. Whatever transformation I am going through as a grown-up, these old tales still hits me with an unerasable sense of nostalgia. I won’t say that “Stranger Things” is as imaginative and potent as the tales of 80’s masters, but what it rightfully makes us do is emotionally invest ourselves with these characters. 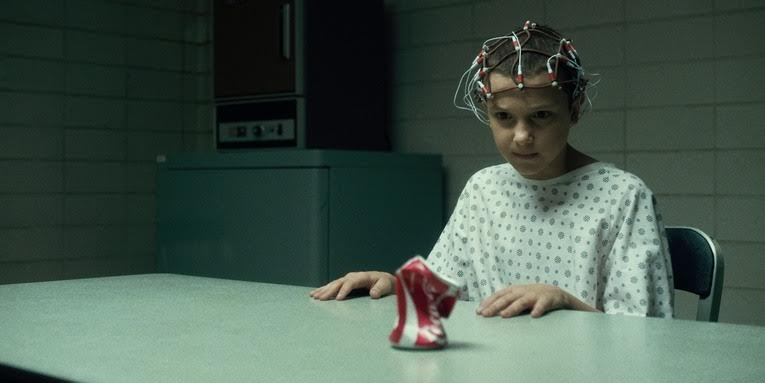 Director Shawn Levy and creators/directors Duffer Brothers (Matt and Ross) knows that neither the thrills nor the CGI creature would resonant strongly with viewers, if we fail to care about the characters’ plight.  The wonderful young actors’ teasing, goofy resolutions, endurance and banter made that inner child within me to relate as well as to worry about their safety (I personally liked Dustin). The chemistry between these three kids makes us believe in their ludicrous pseudo-science theories. Mille Brown as ‘El’ is a great scene-stealer. While she is the girl who opened ways to new, strange portals, her wonderful face works like a portal, revealing cornucopia of emotions – from bewilderment, fear to pure rage. Although the atmosphere Duffer Brothers creates for the series isn’t entirely robust — populated with some lesser engaging characters and predictable plot resolutions — it is the presence of Mille Brown that totally arrested my attention. Winona Ryder’s Joyce is under-written and stereotypical, but she does her best to elevate the anxiety-ridden role (I just hoped that she would those recurrent jumpy reactions to bare minimum). The parallel dimension and the toxic, Alien-like atmosphere are murkily portrayed and I think there would be adequate explanation in the subsequent season (the ending sets up things quite nicely for the next season).

The loving nods to iconic American horror/adventure stories plus the emotionally involving mixture of nostalgia and darkness makes “Stranger Things” a binge-worthy series. It has its limp moments and corny scenes, but it didn’t feel tiresome.

The Wailing [2016]: Killing them diabolically