Earth has been on red alert for quite some time due to human’s ongoing disrespect towards the environment. While climate activists are constantly trying to wake up big industries that are hugely contributing to this decay, which will eventually cause the extinction of mankind. Many filmmakers are trying to do the same via the medium of cinema. Some of the most recent examples are Emilie Lebech Kaae’s Ragnarok, Disney’s Raya and the Last Dragon, Sung-hee Jo’s Space Sweepers, Ben Wheatley’s In The Earth, Dash Shaw’s Cryptozoo, Christopher Nolan’s Tenet, and Tomm Moore and Ross Stewart’s Wolfwalkers. And by the looks of it, David Lowery has joined this roster with his latest feature, The Green Knight.

The movie is based on the poem ‘Sir Gawain and the Green Knight’ by anonymous. It tells the tale of Gawain (Dev Patel), a nephew of King Arthur (Sean Harris), who is challenged by the titular character to strike a blow on him, then meet him at The Green Chapel one year hence and receive a similar blow. It is written, directed, edited, and co-produced by Lowery. The cinematography is by Andrew Droz Palermo. The music is by Daniel Hart. And in addition to Patel and Harris, the movie stars Alicia Vikander as Gawain’s lover Essel and The Lady, Sarita Choudhury as Gawain’s Mother, Kate Dickie as Queen Guinevere, Ralph Ineson as the Green Knight, Barry Keoghan as the Scavenger, Erin Kellyman as Winifred, and Joel Edgerton as the Lord. The Green Knight comments on man’s parasitic relationship with nature in three very distinct ways. The first is through its visual storytelling. The second is through the very nature of the Green Knight’s challenge. And the third is its rather bittersweet conclusion.

Related to The Green Knight: A Ghost Story [2017]: An existential Portray of featherbed of grief

Let’s talk about visual storytelling first. Gawain has always been interpreted as a representative of human civilization. In ‘The Green Knight’, he largely plays that role only, which then evolves (or devolves) into something else, which we will come to later. Since Gawain represents humanity, he’s shown to be attending the celebration of man-made religion and holiday against a backdrop that’s grey and lifeless. That’s contrasted by Gawain’s mother, who is a witch, performing Pagan rituals in a setting with more life-like, earthy, and green tones. When Queen Guinevere reads out the Green Knight’s letter, the courtroom is bathed in green-lighting, thereby extending the Green Knight’s nature-esque presence. Compare that with the Green Knight’s “courtroom” in the Chapel, and you’ll notice the greenery gushing out of the frame.

When Gawain begins his journey, there is an extended shot of him leaving Camelot. It shows how barren everything around the citadel is, thereby indicating that the number of humans is inversely proportional to the growth of nature. Those shots are followed by scenes of deforestation and a war field to show the impact humans have had on nature wherever they have gone in numbers. Gawain’s altercation between the scavengers, which takes place exactly at the halfway mark of the movie, is a balance of the perils of both nature and mankind. But as the movie goes on, we see that nature is far more giving than humans via silent shots of Gawain drinking water, seeking shelter in caves, and receiving company from a fox. Whereas humans are still prone to “taking” (in this case, another human life) even in solitude, as proven by Winifred’s fate. 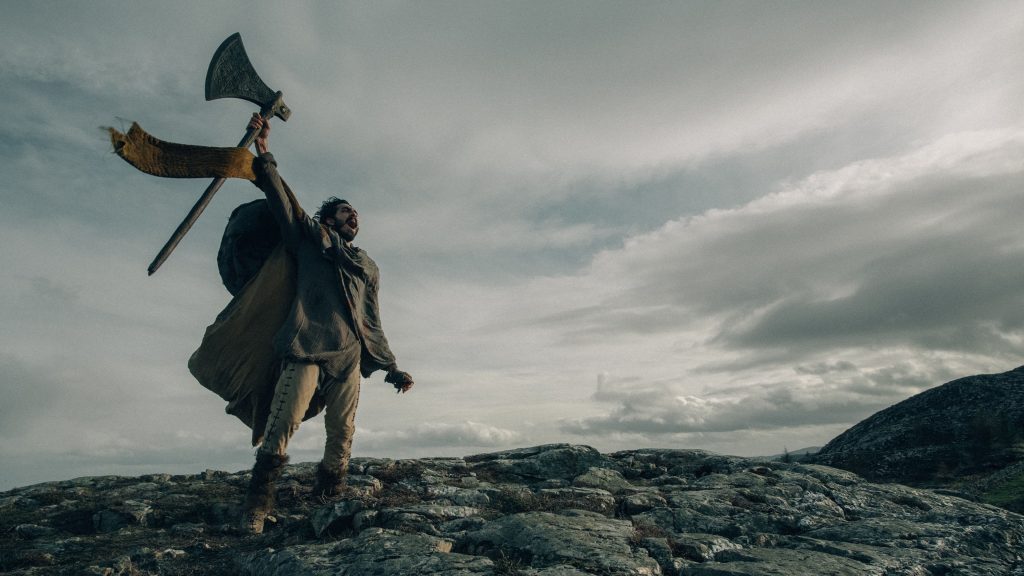 Now, let’s come to the centerpiece, The Green Knight’s challenge. According to the popular interpretations and the marketing, Gawain’s journey is about proving that he’s worthy of being a Knight. That it’s a quest for honor. That it’s about Gawain finding the courage to face the Green Knight. And that it’s a trial-by-fire he has to face to have a tale of greatness that he can call his own (which may or may not have been initiated by his mother because she knew that like every other kid born into privilege, Gawain would just drink himself to death unless he’s thrown into the deep end). But, in my opinion, it’s also about Gawain learning a lesson on self-sacrifice from a figure who symbolizes nature since Gawain and the species that he represents have been all about consumption without any perceivable repercussions.

If it wasn’t very apparent from the visual storytelling, Gawain is shown very clearly during the final moments of the movie what will transpire if he doesn’t forgo his mother’s protection and, as kids nowadays like to say, take one for the team. Yes, Gawain’s blow on the Green Knight personifies humans hacking away at nature, and the Green Knight’s blow on Gawain is nature asking humans to pay the hell up. And until Gawain sees his future, he boils down the act of selflessness, something that nature has been doing since the birth of time, to the statement, “Is this really all there is?”. The answer to it is ‘yes’. This is all there is to an act of generosity. And yet, just like this wannabe knight, Gawain, we as a species have been doing kinds of mental gymnastics, cry, and whimper so that we can continue to extract everything from nature under the garb of technological advancements.

This brings us to the third point, the bittersweet conclusion. Lowery leaves us on a positive note with Gawain learning that self-sacrifice is more important than self-preservation. But during a post-credits scene, we see a kid entering the frame and picking up the crown, thereby, advertently or inadvertently, restarting the endless cycle that rot and growth are bound to repeat. Which is something that is alluded to during a conversation scene between The Lady and Gawain after she asks why the Green Knight green in color is, and then proceeds to talk about how green signifies nature as well as rot. How nature has a way of coming back but so does a rot. How nature will eventually cover everything has stepped on, which is something that will be initiated by the rot.

So, yes, even though Gawain is able to realize that he, and by extension humankind, is the entity that is rotting nature and is able to give something back, it also means that since he doesn’t live to tell his tale, someone who knows nothing about self-sacrifice takes his place and restarts the ordeal of taking without giving. Then would it have been better for him to avoid the blow so that he could have handed over his learnings to the next generation and then they could’ve struck a balanced give-and-take relationship with nature? We don’t know. What we do know is that through the movie and Gawain’s tale, the audience is being told to strive towards preserving nature instead of being selfish. Or else we will have to pay for it with not just one life, but millions.

To bring things to a close, all I want to say is that The Green Knight is undoubtedly one of the best movies of the year and it’s a movie that I am going to revisit a lot of times. It has great performances, direction, editing, cinematography, VFX, SFX, makeup design, costume design, production design, and music composition. I truly admire Lowery and his team’s dedication towards digging into the elements that make fantasy such an amazing genre. And I adore the fact that this version of Gawain’s tale has redefined chivalry through the lens of environmentalism.

The Green Knight is available on VOD and in theatres.