I couldn’t wholly attune to this pastiche of decay, brutality and excessive packaging of tough luck. Yet 'Violence Voyager' would be rejoiced by 18+ 'kids' with a taste for gory delights

There’s a kind of irrepressible visual appeal in the imaginative paper or cardboard-cutout dioramas of Ujicha’s second ‘gekimation’ feature Violence Voyager (2018), to which I was drawn to after watching the potentially interesting trailer. Ujicha’s concept of ‘geki-mation’ employs variety of hand-drawn cutouts (full of colored pencil drawings)  to act like marionettes (there is no detailed movement and no moving mouths) and further adds music plus diegetic sounds in order to create the artistically curious atmosphere of gruesome fantasy. The artists’ debut feature, The Burning Buddha Man (made in 2013 and shown at Fantasia like Violence Voyager) tells the unbelievably outre tale of a high-school girl, confronting a greater evil that’s a mix of Lovecraftian/Cronenbergian elements. Violence Voyager (in works for three years) is equally bizarre and psychedelic, while its basic concept boasts the adventure format of Steven Spielberg and Stephen King stories. If one could understand the limitations of the format and stomach its relentless gore, then they may have campy fun.

Innocent and playful twelve-year-old, Bobby and Akkun walk home from school, discussing their plans to visit their friend at the village on the other side by taking a short-cut through the mountain. Bobby takes a day’s food supplies and is accompanied by his feline mate, Derrick. As Bobby and Akkun venture deep into the forest, they come across the isolated cottage of a hermit, simply known as ‘Old Man Lucky-Monkey’. Akkun is friends with the old man, who warns the boys about going up the mountain. And of course, 12 year-old boys take no heed to the admonishing tone of a wizened old guy. Very soon, the duo and their animal companion stumble across an abandoned, pre-digital era amusement park. A bald-headed scientist-type guy welcomes them and explains the alien-invasion theme behind the park’s design.

Bobby and Akkun are equipped with gears, water pistols, protective suits, and they role-play as soldiers presented with a task to annihilate alien robots. The boys soon discover that the theme park is a ruse to capture children for an inscrutable but nefarious purpose and that a robot-like rogue creature is after them. They also come across other trapped children. Up until now, we may think of it as a moral story of kids variety, telling the importance of staying together and driving out the monstrous evil (in Stranger Things-style). But Ujicha suddenly pushes you headlong into his nightmarish world, where children are murdered, grotesquely dismembered, and more unspeakably awful things happen. 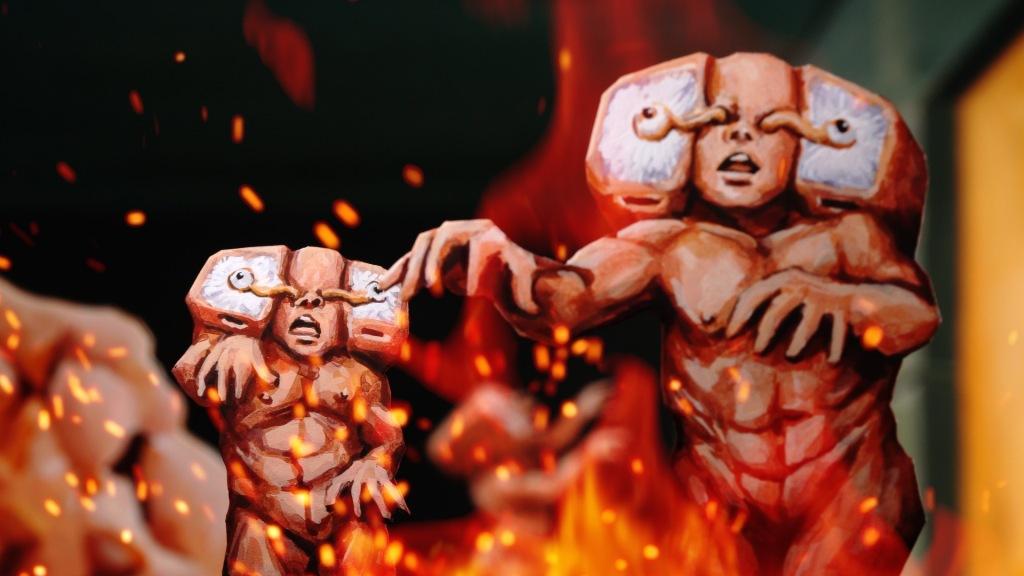 Violence Voyager is a seriously low-budget feature, although the independent animator treats his unique style and pulpy story with utmost seriousness. It’s an amalgamation of Lovecraft and Shochiku sci-fi/horror (made in the mid-to-late 1960s). Earlier in the film, the disgraced mad-scientist Koike tells the boys about his single-handed effort in the creation of theme-park. The scientist being Ujicha’s surrogate stands-in for the distinctive creator’s obsessions that are strewn with kinkiness, unresolved hunger, and torment. Unlike many sci-fi horrors, Ujicha doesn’t promise his viewers with the possible restoration of goodness. In fact, the grotesque elements progresses rapidly till the final cut-out. Despite the artist’s uncomfortable outrageousness and lack of restraint in the narrative, his formal fabric is astonishingly beautiful at times.

Violence Voyager doesn’t have much of a science as it employs intimidating, unreal technology to produce unfettered horror. A heap of ugly sentient flesh known as ‘Mother’ mutates the children’s body, dripped in acid-like liquid; the burned bodies and pulled-out eye-balls mimics the effect of nuclear radiation. Moreover, what the gekimation lacks in fluidity (not be confused with the pasty fluids, which Ujicha has a lot in his stock), it makes up for with such horrifying drawings. There’s interesting dead pan comedy in the initial developments, but the whole frame-work has the ‘child’s-imagination-gone-wrong’ effect. Hence the film’s ‘enjoyable’ factor relies on how much of these shocking images one can take on (without feeling the need to throw up). I couldn’t wholly attune to this pastiche of decay, brutality and excessive packaging of tough luck. Yet Violence Voyager (83 minutes) would be rejoiced by 18+ ‘kids’ with a taste for gory delights and the cult following for the uncanny artist Ujicha’s off-the-wall works may increase manifold. It’s an artistically delirious product, surfacing straight from the jagged contours of a wildly imaginative mind.