Watcher (2022) Movie Explained: Ending & Themes Analysed: It’s hard to completely understand from a male gaze the pervasive feeling experienced by every woman. The paranoia and fear of being watched. The isolation and loneliness feel all-consuming when you account for being in an unfamiliar country, unable to understand the language or completely lost in the milieu. Consequently, the protagonist having that paranoia validated is all the more unsettling and terrifying.

Julia (Maika Monroe) moves to Bucharest with her husband Francis (Karl Glusman) who has been assigned to a marketing position. Francis’ familiarity with the language stems from his mother’s fluency, while Julia’s unfamiliarity with the language gives rise to a sense of existential ennui in her, exacerbated by her failed career as an actress. They move into an apartment building that has a large picture window. That night, unable to sleep, she watches through that window as rain pours heavily down and realises that a man is watching her from the building across the street. To rid herself of her ennui while her husband works long hours, Julia attempts to learn the language while familiarizing herself with the city. But as she explores the city, the hackles on her back are always raised because she is overtaken by the unsettling feeling of always being followed.

Watcher Featured in The 10 Best Films From Sundance Film Festival, 2022

A few incidental events also occur which makes Julia unsettled. The first is the murder of a woman in one of the building complexes adjacent to theirs. Julia and Francis were returning one night after a walk when they came across a crowd huddled in front of an ambulance, housing one guy looking at the crowd in stunned shock. Julia later learns from the news that the woman was murdered, and her fear gets compounded when during a dinner conversation with Francis’ colleagues she learns that the woman had her head decapitated and it is related to “other attacks”. Julia’s cursory research in the internet the next day provides her information of “The Spider”, a serial killer who has been decapitating younger women. An interview with one of the women who had been attacked two days ago reveals that the killer had entered her house in the dead of the night, pressed a pillow over her face, and put a knife over her throat. But he had stopped going through the deed and had sat beside her and watched. She felt that he had been sitting for hours.

Julia’s fear of being followed returns while walking through the city one day, and she enters a movie theatre (playing Stanley Donen’s 1963 movie Charade) in an attempt to evade him. As she sits in the theatre and settles in to watch the movie, she realises that the man has sat directly behind her. In an obvious panic, she exits the theatre and walks into the nearest supermarket. Realising that the man hadn’t given up, she manages to give him the slip and hide behind the service doorway, trying to catch a glimpse of the man’s face. When discovered by one of the workers in the supermarket, she apologises and exits through the back door. That night, Francis comes home to find Julia frazzled by the experience. To assuage her, they go to the supermarket to review the security footage. She manages to identify the man via the security footage and takes a picture of him, even as Francis has trouble believing Julia’s claims of being stalked by the man.

Julia feels comfort and a sense of kinship with her neighbour, Irina. One night, when they are having drinks, Irina is interrupted by her ex-boyfriend, Cristian, knocking at the door. Irina stands her ground and makes him leave. She also shows Julia the drawer where she keeps her pistol (a gift from Cristian) for her protection. Later that night, as Julia returns home, she looks out the window and sees the man watching her again. Suspicious, she waves at him, and to her horror, he waves back. As Francis returns, Julia informs him of the incident and decides to call the police. Both Francis and the policeman look at her quizzically while she is convinced that the man watching her is the same man who had been following her. She even showed the picture she had taken from the CCTV footage. The policeman, accompanied by Francis, goes to the adjacent building to speak with the man. They learn that the man’s name is Daniel Webber (played by Burn Gorman), but Francis is still unconvinced by her fears, believing her to be needlessly paranoid.

A couple of days later, Julia follows Daniel through the city, eventually following him to a strip club named The Museum. There she is met by Irina, who she learns works there. She also learns that Daniel is a sweeper working at the strip club, but Irina is unable to remember him as she faces men having the same dumb expression throughout the day, thus all these faces become a blur after a while. Later that night, Julia hears a commotion in Irina’s apartment. The walls between their apartments are thin enough that she could clearly hear glass breaking and a cry for help from Irina. Knocking on her door repeatedly, Julia receives no answer, and she finally convinces her neighbours to help her open the door. When they finally succeed, she sees the empty apartment and one of her neighbour’s cat sitting atop the dressing table, believed to be the one to knock over the lamp, thus creating the commotion that Julia had heard. Francis becomes impatient with Julia, believing her fears to be unfounded. He also informs her that the serial killer “The Spider” has been finally apprehended.

The next day, Julia is met by Cristian, Irina’s ex-boyfriend. Julia informs him that Irina never returned home, which makes him worried because they were supposed to meet up after Irina left for work. She requests Cristian to accompany her to the adjacent building and help her confront Daniel. Cristian knocks on the door of his apartment, but no one answers. After Cristian leaves, Julia finally works up the courage to knock on the door herself, but it is answered by an unfamiliar elderly man. Later that night, when Francis has returned home, Julia is visited by a police officer accompanied by Daniel, who had accused Julia of stalking him. After offering up explanations, Julia and Daniel reluctantly shake hands while the officer chalks this incident up as a misunderstanding.

Having accompanied Francis to a company party, Julia manages to use her limited knowledge of the Romanian language to glean that she and her fears are objects of ridicule, which Francis uses to acclimatize with his coworkers. Disheartened, angry and finally resigned to the gaslighting she has been experiencing these last few weeks, she leaves the party and boards the subway. The car was nearly empty, but she noticed Daniel sitting farther away. He approaches her and tries to explain away his voyeurism as a result of the crippling loneliness he feels due to the most monotonous life of caring for his ailing father. She would have believed him, but she notices his shopping bag and what appears to be the outline of a severed head. De-boarding the train, she rapidly walks to her apartment and starts packing her bags with the intent to swiftly leave this city. However, she hears the sound of music playing in Irina’s apartment.

Curiosity getting the better of her, she decides to investigate. She enters the apartment and finds Irina’s headless corpse leaning against a chair. Before she could scream, Daniel uses the plastic bag he has been carrying to smother her, knocking her unconscious. When she comes to, she finds Daniel’s silhouette looking over her. Daniel recounts how he killed Irina, covertly revealing himself to be “The Spider,” and also reveals that he and Irina had been hiding in the closet when Julia entered with the landlady a couple of days ago. As Julia hears Francis trying to enter their apartment, she strains to scream, but Daniel swiftly uses the knife to slice her throat. Blood spilling from her neck, she attempts to crawl to the coffee table where Irina keeps her gun but stops. Daniel leans down and watches her as she loses consciousness. 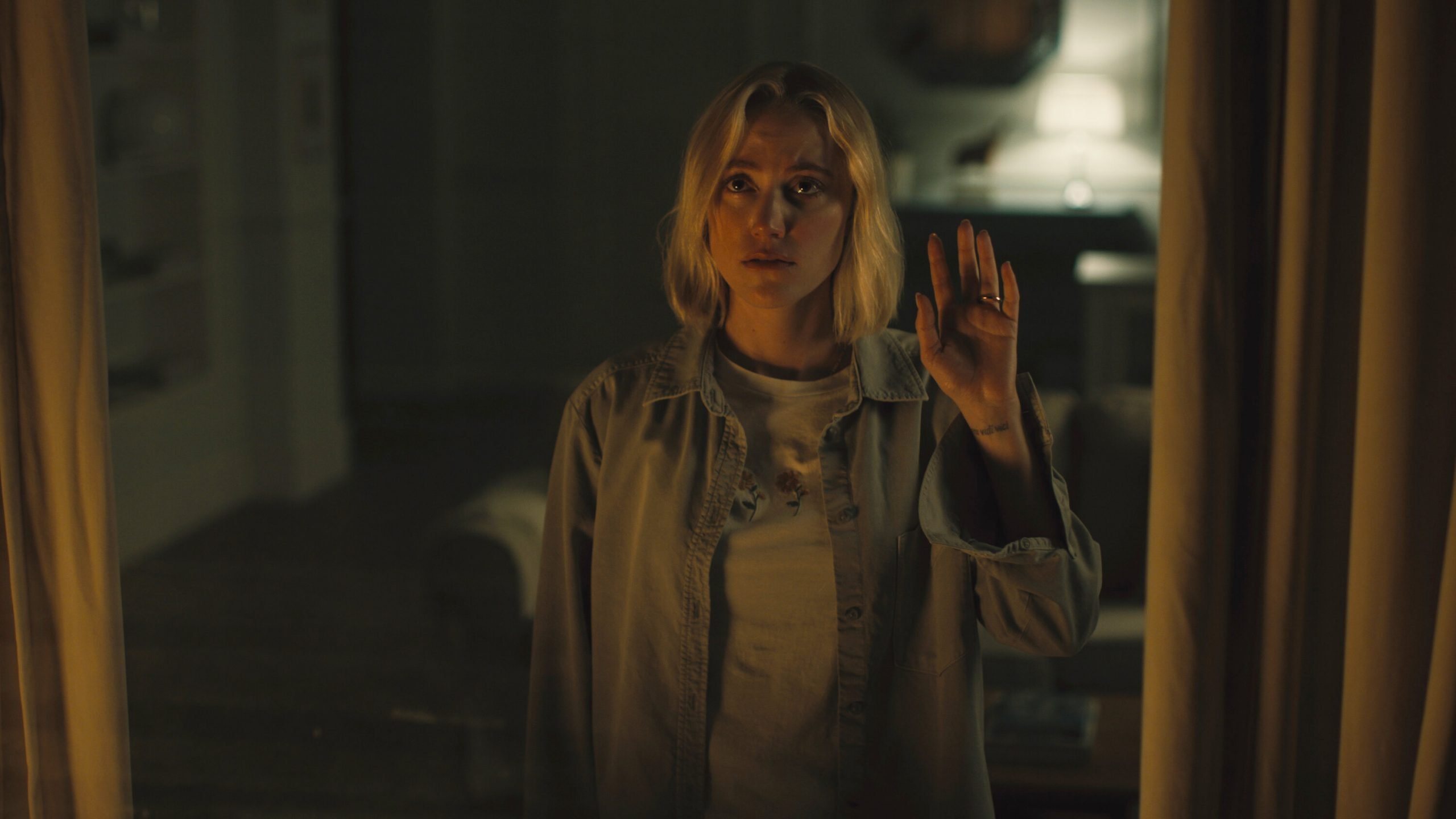 On entering her apartment and unable to find Julia, Francis calls her on her cellphone. Hearing the ringtone from Irina’s apartment, he walks out to the corridor and sees Daniel exiting the apartment. The two lock eyes, but before Francis can do anything, Daniel is shot multiple times from the back. Twisting and falling to the ground, the last thing Daniel sees is a bloodied Julia, who has managed to locate the gun and kill him. As Francis walks over in shock towards the bloody scene, Julia, in her bloody attire, stares at him stonily, almost saying “I told you so,” before the film cuts to black.

Structured as a slow burn, the movie tries to capture Julia’s (played by a superb Maika Monroe) mind as she is plagued by fear and paranoia of a person stalking her. The movie also tries to explore the gaslighting faced by her boyfriend as well as the people around her. It is further compounded by the feeling of isolation that occurs due to living in a foreign country and being unfamiliar with the language as well as the culture. The only source of connection Maika manages to forge, her neighbour Irina, also gets killed, exacerbating her loneliness and apprehension. It is why the ending, which works as a superb case of subversion of tropes, is also a way of Maika reclaiming her courage and extricating herself from the existential ennui that had been plaguing her since the beginning of the movie.

Watcher (2022) also shows the two types of gazes that plague Julia. The first is the aggressive and even casual gaze afforded by the people of the city, who look at her with a sense of curiosity while associating her with superficial attributes and with her fears and not straining to go any deeper than necessary. The second gaze (the only example of an affirming one) is the one she shares with Irina, two women who bond over loneliness and the promise to look out for each other. A promise of female solidarity that is cruelly snatched from her, which she later manages to avenge in the finale. I only wish the movie was paced better and the screenplay a tad bit tighter. It is still an interesting if a bit trope-heavy, Hitchcockian thriller and an interesting debut feature by Chloe Okuno.