10 Films to Watch If You Love Christopher Nolan’s Dunkirk

If you were thrilled by the sound of explosions and were grasping for breath because of the heart-pounding warfare tension, here are 10 more films to munch down along with Dunkirk!

10 Films to Watch If You Love Dunkirk

One week at the hauntingly beautiful beach, one hour in the treacherously serene skyline and one day riding over the hurricane tides at sea; Christopher Nolan stirred the ingredients in a potion of survival and hope, giving us the monumentally mounted and astoundingly ambitious magic, Dunkirk. The rescue of Allied Forces is saddled with Nolan’s signature blend of juggling alternate timelines, nearly nerve wrecking background score by Hans Zimmer and beautiful shots through 70 mm reel. Dunkirk, in its totality, is a knockout stunner.

If you were thrilled by the sound of it’s explosions and bullets, digged the intimate anti-war narrative, were grasping for breath because of the heart-pounding warfare tension and then felt the tingling all over your spine for the mankind’s infinite will to survive against odds, here are 10 more films to munch down along with Dunkirk! 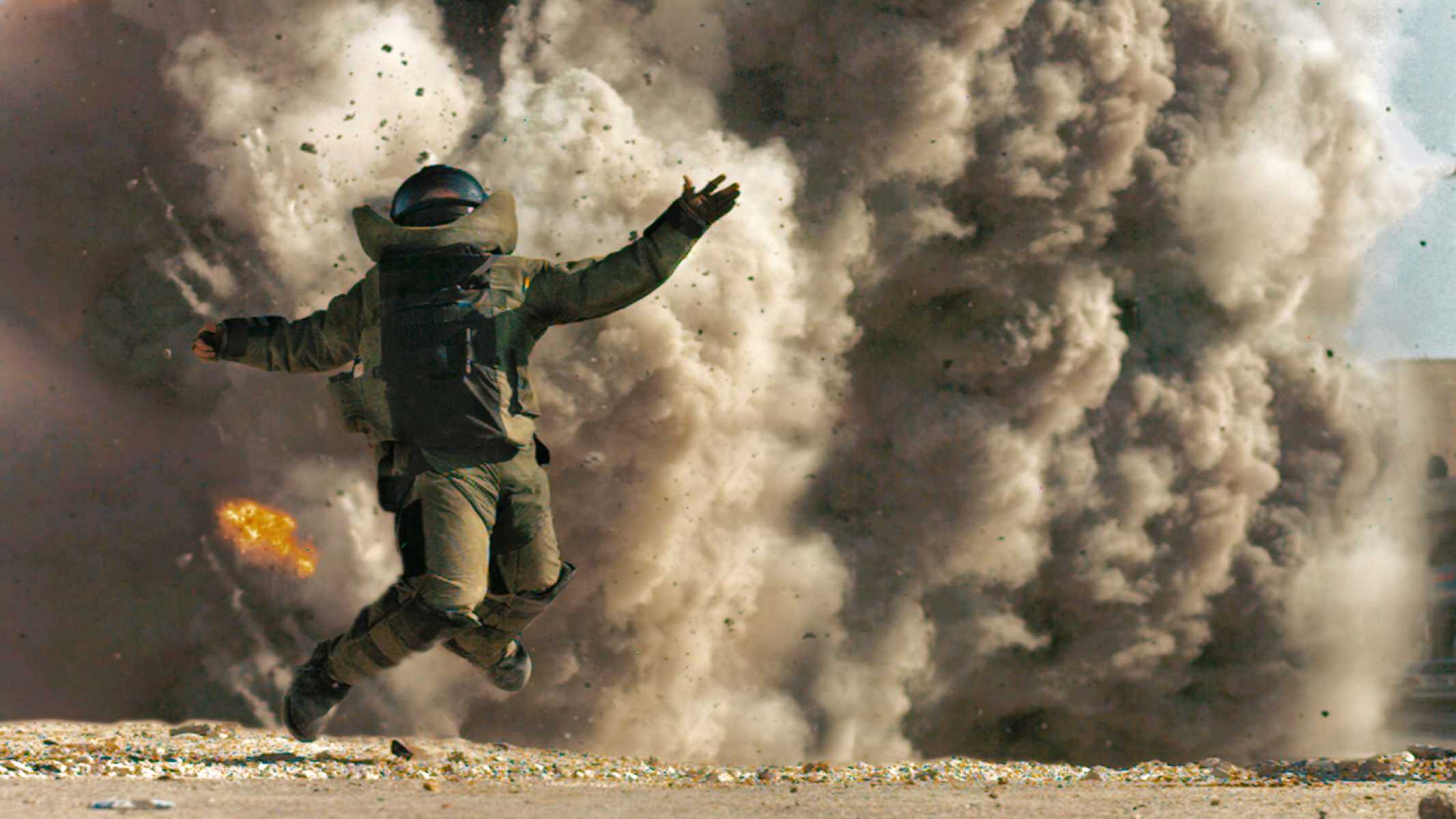 An unflinching and brutal take of an Explosive Defusal Squad in midst of horrid Middle Eastern War, Katheryn Bigelow was virtually shot from dust to skies with The Hurt Locker. Overhead sniper hawks, rubble of cities lying in the wake of war and silence of death hanging over every road-side bomb, Bigelow grabs us from our collars and pushes us headfirst into chaotic warfare.

It’s nail biting buildups, the de-politicized execution and knack of sending icy shivers down the viewers spine ensured that Bigelow’s disquieting vision cements The Hurt Locker as one of the best war movies of the past decade. 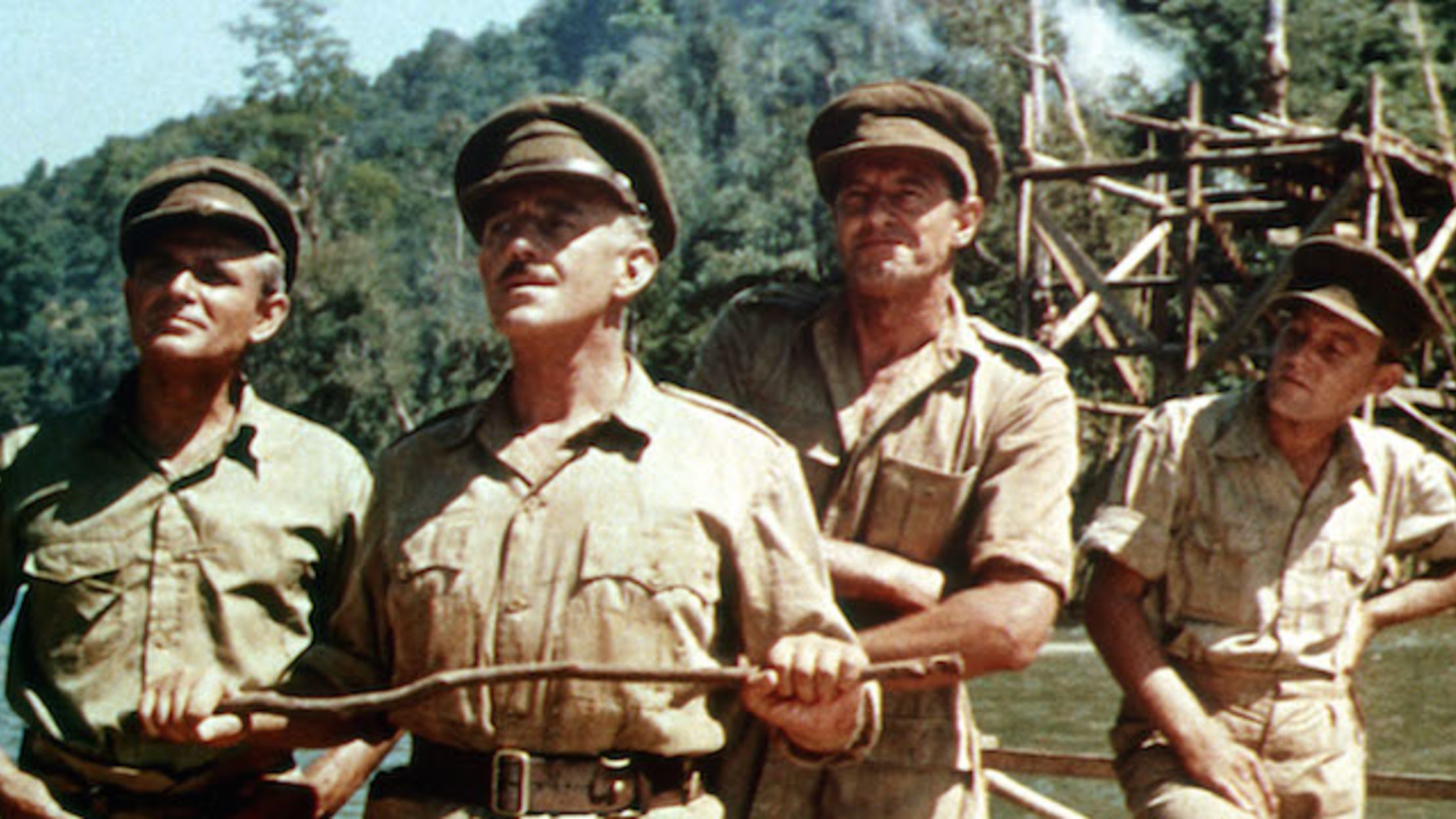 When British soldiers are captured and caged as prisoners of war during Japanese military in World War II, the task to construct a bridge across the river Kwai catapults into a moral dilemma. Colonel Nicholson requires the British soldiers to build the bridge  in it pristine state, as a shining testament to the cavalry. However, the task in itself can be seen as supporting the enemy, if viewed from a different end of the spectrum.

Boasting of top notch writing and thematically complex narrative arc, this adaption of Pierre Boulle’s novel by David Lean refuses to take any side nor gives any explanations for its characters eccentric decisions. The Bridge on the River Kwai is like an old wine which gets even better as it ages. 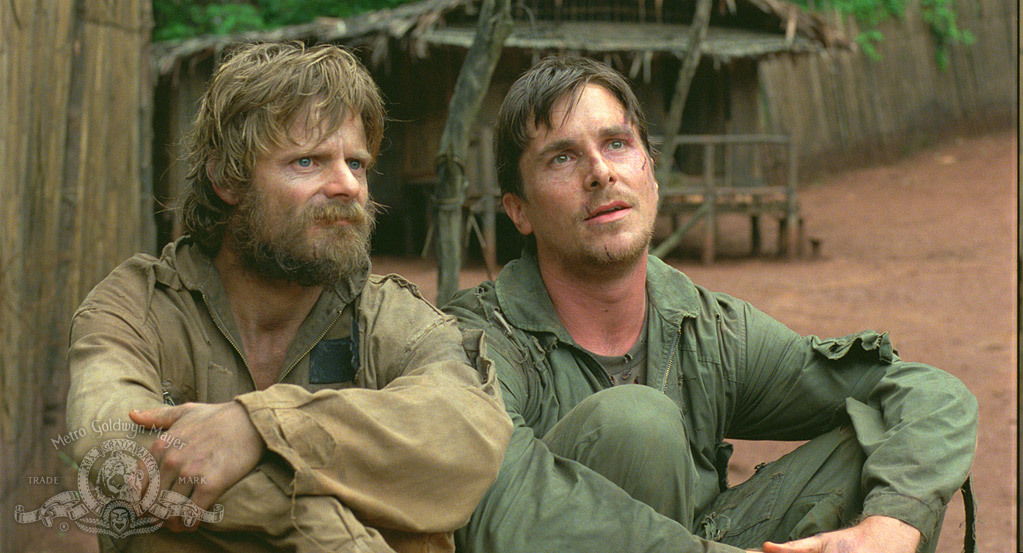 When an American fighter plane crashes in Vietnamese wilderness, it’s pilot Dieter is captured by local tribesmen. Narrating the incidents in a near documentary methodology, Werner Herzog scraps the survival instinct of human spirit against natural hurdles clubbing them with the ones caused by warfare.

With Christian Bale giving an electric central performance, Rescue Dawn might not lie in the top echelons of Herzog’s works but is still an eccentric and often poetic take upon necessity of hope in times of crisis.

Zandvliet takes us to the beauties of Denmark with its golden sand and sun soaked beaches and then reveals man’s inherent traits of violence. He makes sure we absorb the contrast between peace and serenity which then he blows to the treacherous winds. Every breath awaits an explosion with dreaded regrets, every day awaits a death with an open welcome.

On the same lines as Dunkirk, Land of Mine is harrowing, brutal and leaves no stone un-turned to gut punch the air out of you. It plays around with moral boundaries, injecting sympathies in least expected places and values the price of survival in a war torn landscape jeweled with mines. 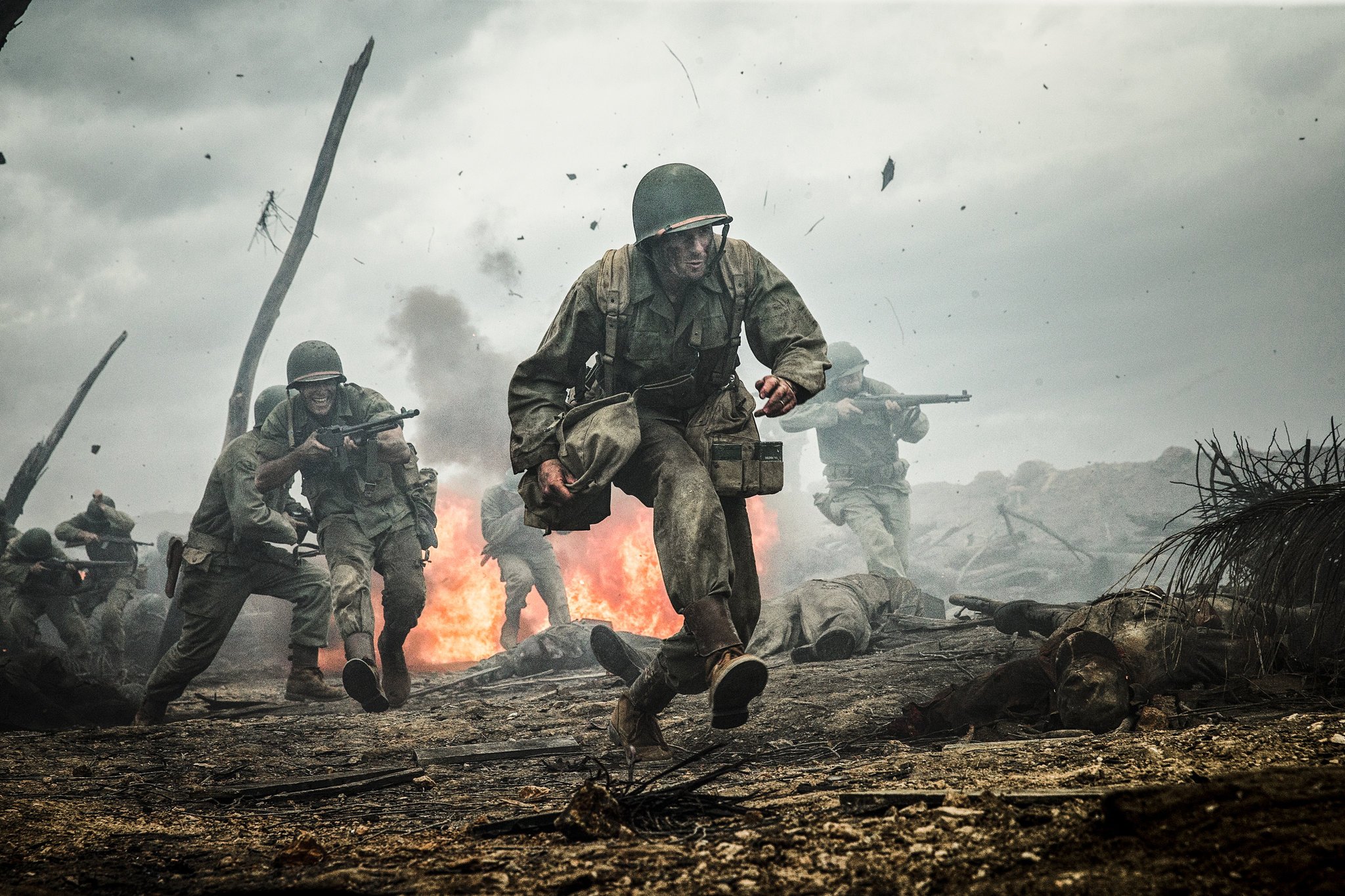 It rained like a grand meteor shower. As if fire has descended down from the mighty skies to wreak havoc. The blood and ground became one and staged upon them was the dance of madness in all its bloodcurdling horror and savagery. As the cavalry marched into Hacksaw Ridge, war became one with men. It penetrated their skins, hinged its claws behind their necks and compelled their actions. It felt as if all of the existence has collapsed into a single moment of warfare. And this moment is to last till eternity.

In ways similar to Dunkirk, Mel Gibson’s Hacksaw Ridge is destruction personified. It weighs the fragility of life against concreteness of faith. It is a pristine vision of devastation so harrowing that it’ll make the bravest of our kind to look away. 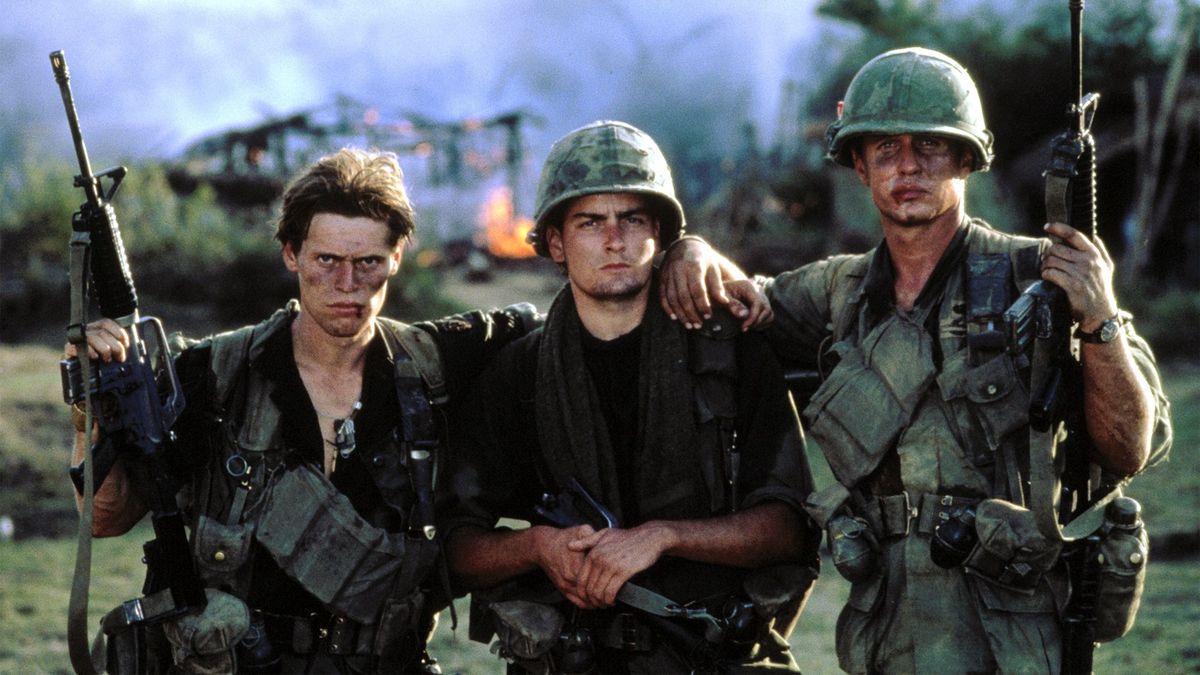 Oliver Stone had wrenched his veins and out from them, dripped Platoon. He put all his nightmares into his art resulting in a complex psychological study of men at war in this harrowing tale of a green soldier who volunteered to go to Vietnam war. Stone covers loss of innocence, polar opposite reactions of men when faced with dire circumstances and existential dilemmas in this blood soaked visceral look at the violence of battlefield.

A result of Oliver Stone’s purging, the final result gives such a fever rush that it is as close to war as you can get. The urgency, the bitter battle truths and then the poetic angst when insanity bites, Platoon is a maniacal laughter from the throats of darkness. 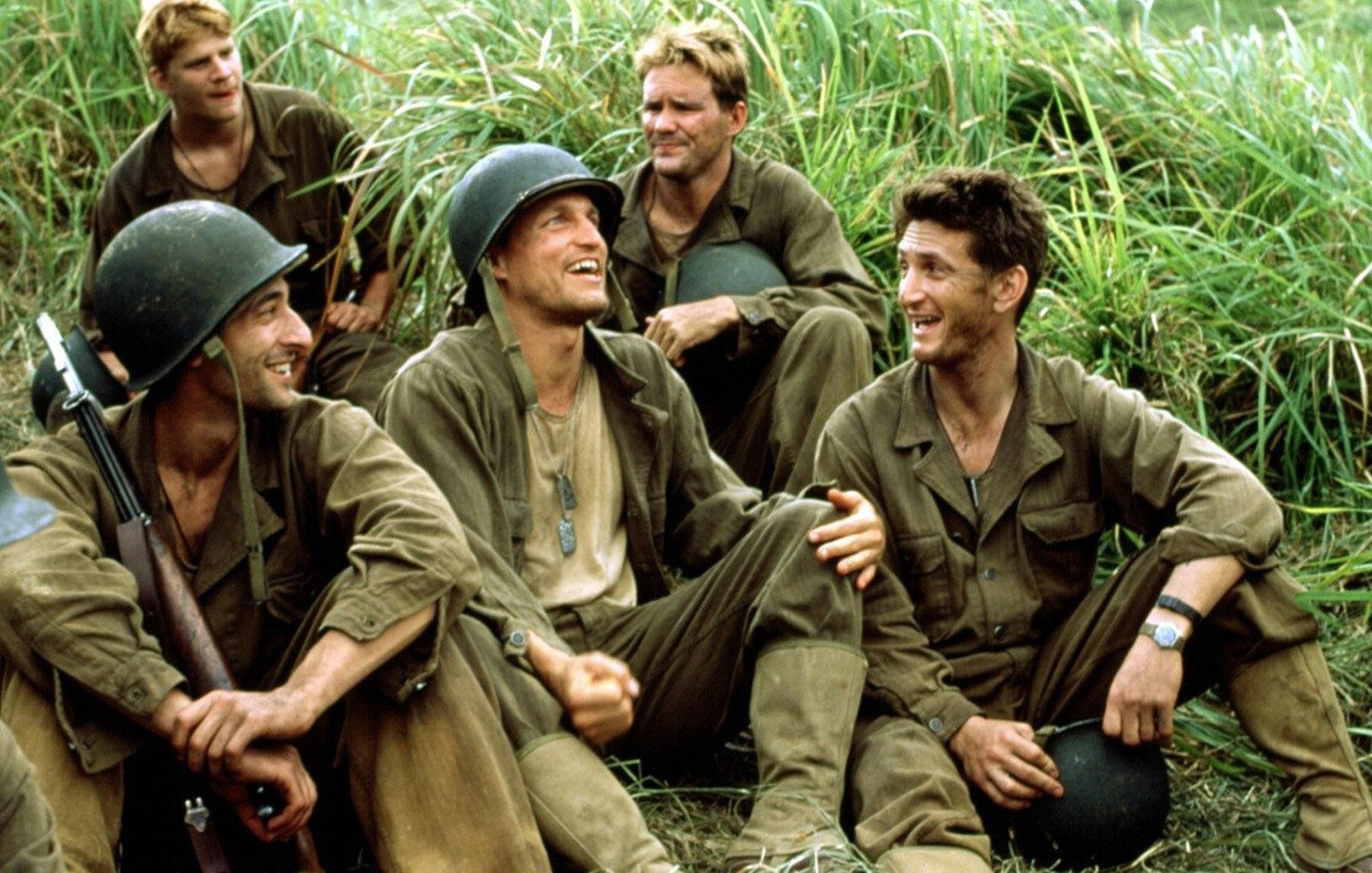 Haunting, meditative and deeply reflective, Terrence Malick digs deeper into the black heart of war by crafting a somber exploration of it’s consequences over the soul of its soldiers. Staggeringly intimate and immensely personal, The Thin Red Line takes a step back from the meaningless violence outside to focus on the chaos and destruction within.

Related Read to Dunkirk: Here’s Why The Non-Linear Narrative Didn’t Work in Dunkirk

The long winding shots, the cinematography and the impact of personally having a rendezvous with death and eventually surviving it, Christopher Nolan might surely have taken a leaf or two from The Thin Red Line. A heavy watch, occasionally, this is a rare cinematic moment when a director in his fully glory, philosophizes the very nature of conflicts 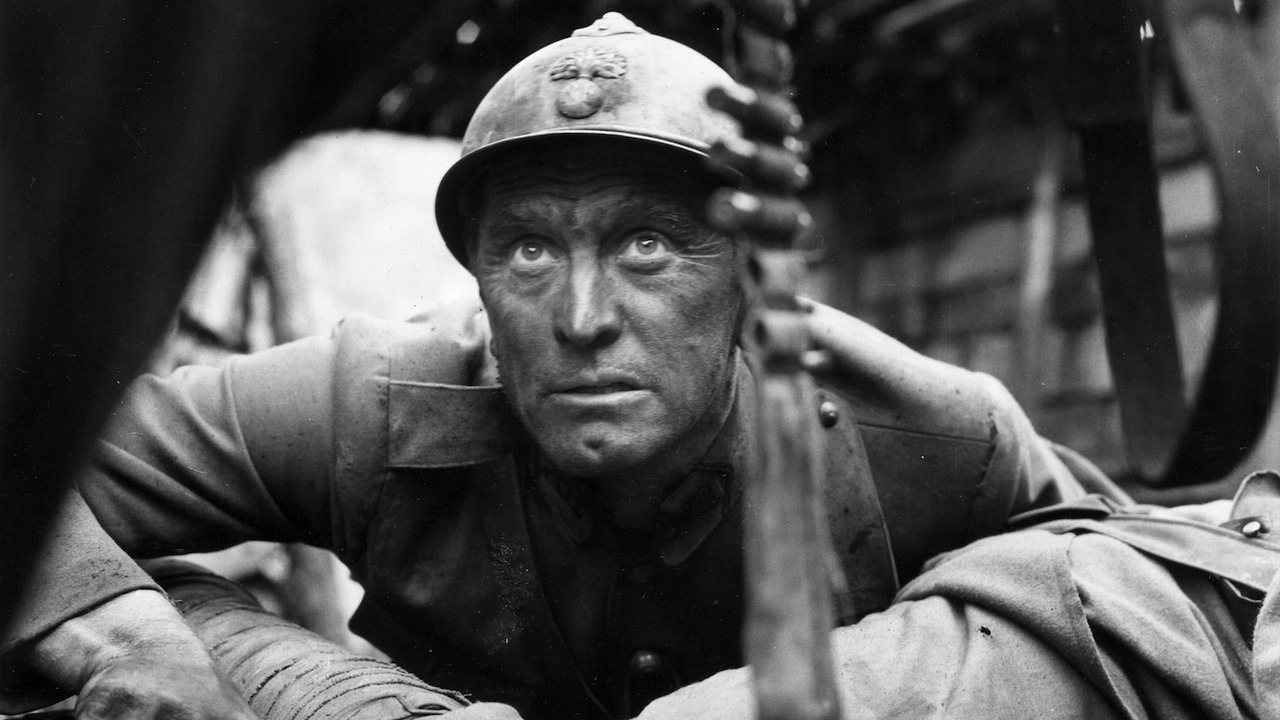 An often neglected work in Kubrick’s much praised filmography, Paths of Glory captures the consequences of rationality in between the times of a chaotic war. Kubrick guides our hands into stranger darkness and leave us there, sobbing over the lack of empathy of one man towards another. He parallels survival with cowardice, balancing moral complexities in a swirl of emotions in war.

Clinical, unforgiving and ironic to a fault , Paths of Glory melts the best of Kubrick’s qualities into one nightmarish grim vision of French Army’s authoritative regime during the heights of World War I. The acts are sharply pieced together, the tone remains coldly formal and the end result is simply spirit-breaking.

Read the complete review of Paths of Glory here 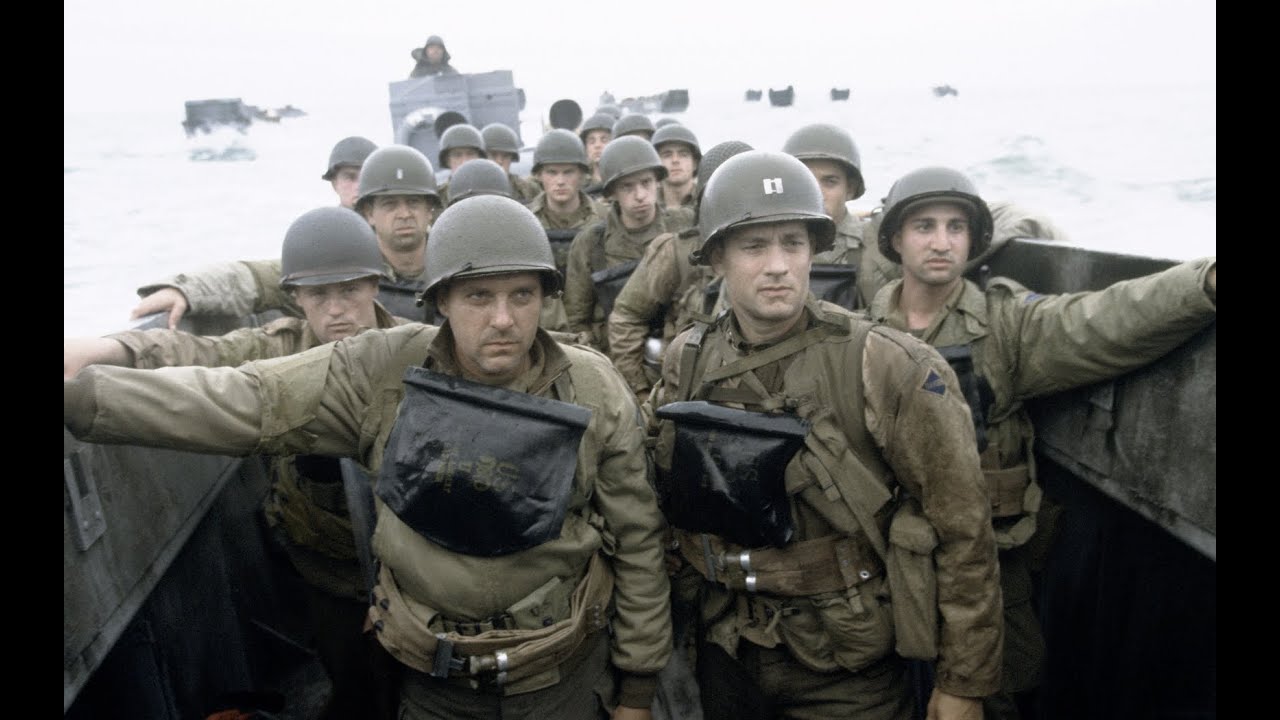 The first 30 minutes of Saving Private Ryan are arguably the most unflinching war field moments cinema has witnessed. They are unhinged, unforgiving, unforgettable and the purest form of adrenaline rush this art form can provide.

Saving Private Ryan is a testament to the art of a craftsman in full command of his material. Steven Spielberg throws us a live hand grenade and expects us to come out unharmed by this experience. The rescue of Private Ryan by Captain Miller from from Omaha Beach will probably go down as the greatest American attempt to capture the harrowing events of World War II. 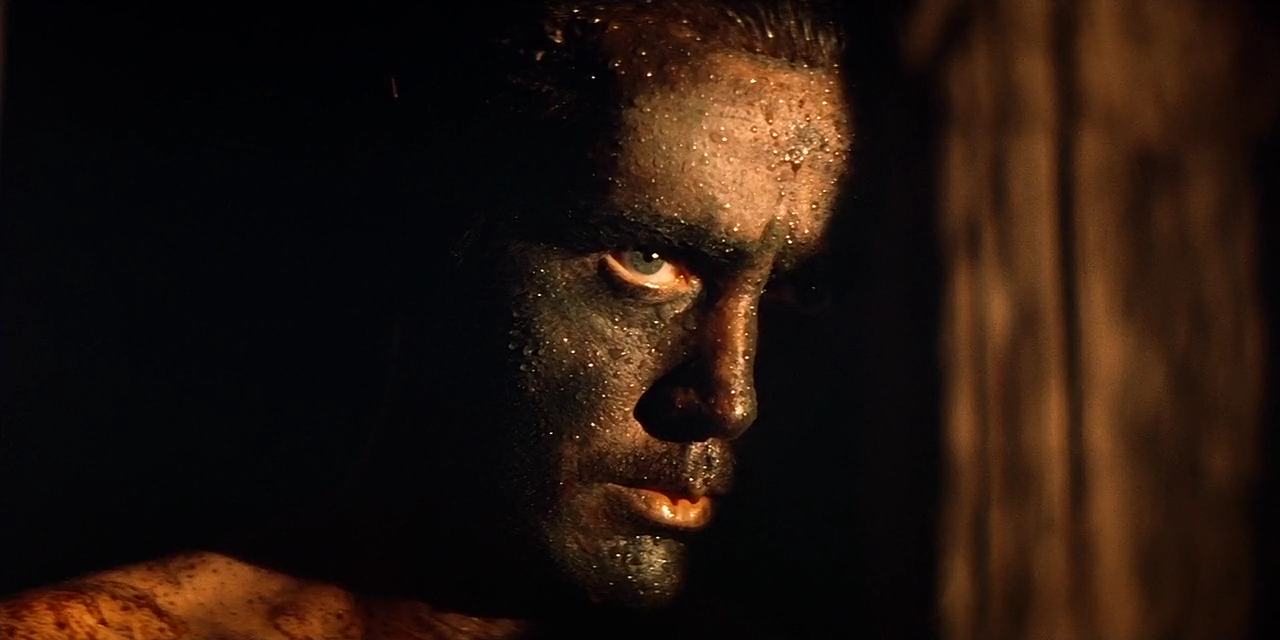 Adapted from a nearly un-adaptable novel, The Heart of Darkness, Francis Ford Copolla takes a look at the Vietnam jungles and stumbles upon  the impenetrable wildness inside man’s psychology. Destructive, dark and thematically complex, Apocalypse Now is and will remain the benchmark against which this genre entries are weighed against.

10 Films to Watch If You Love Christopher Nolan’s Dunkirk