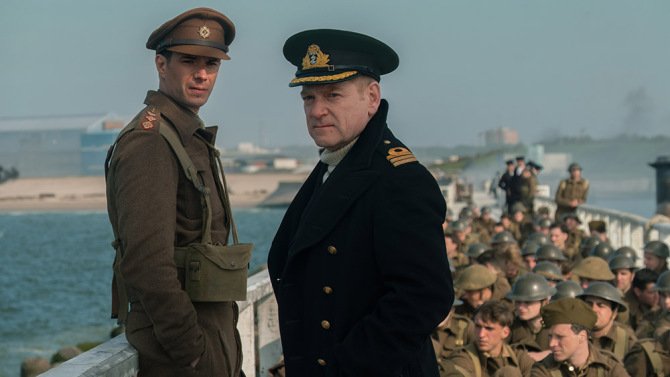 Christopher Nolan is one of the more popular contemporary directors in the world. One might even go as far as to say that he is a star, a moniker often associated with actors. Even though this fame of his is much due to the Batman Trilogy and Inception (a bit of assumption here, from observation), it was his debut feature that made me admire the craft of Nolan. ‘Following’ was one of the finest low-budget films. Right from ‘Following’ and later vividly in ‘Memento’, what became apparent is that Nolan has a certain affinity for nonlinear narrative. This affinity is reflected in his later works such as ‘Prestige’ and ‘Inception’ too.

So, it is not extremely surprising to see this approach in his latest feature ‘Dunkirk’ based on the Dunkirk evacuation during World War II. The film is shown from three perspectives.  One on the land, through the eyes of a soldier stranded on the beach of Dunkirk, hoping for rescue.  The second one, on the sea featuring a civilian boat answering a call for the rescue operation; and the final one on air through the eyes of pilots of fighter aircraft providing air support to the troops.  These threads are later interwoven to show us the bigger picture; but in Dunkirk, the bigger picture is always in front of our eyes. So, as a result, this is not a collage but torn pieces of an already drawn painting.

Dunkirk is not a character driven film, in defense against some criticism the film faced. The film was not even plot-driven per se. It was more minimalistic than a regular war film. It was mostly moment-driven. The survival of the soldiers was the essence of the film. For a film like this, the multi-timeline, non-simultaneous, nonlinear approach felt like a bringer of confusion and not an appropriate tool to accentuate the film.

Highly Recommended: 10 Films To Watch If You Love Dunkirk

For example, we will look at another film of Nolan. ‘Memento’, the film which challenged the audience with massive experimentation of narrative. For people who are not aware, ‘Memento’ has a complete upside-down narrative; meaning the last scene of the story is shown at first and gradually we move backward till the last scene which, chronologically, is the first one of the story. Now, in this film, the protagonist has short-term memory loss every five minutes. So, in reflection of how the protagonist goes back in memory to make sense of his present, the narrative not only suits the film but elevates it to the taut thriller it is. With each junction of the narrative, we are given information that brings a realization regarding the story till the final junction and final realization which completes the puzzle.

Recommended: The ‘Doodlebugs’ of Survival

But, for Dunkirk, the plot is too simple to provide any sort of realization; and this is not a criticism because often the simplest plots make the finest of films. There are juncture points where the threads are intertwined in Dunkirk. But those do not have any sort of realization regarding the story. Like when we see Cillian Murphy’s character in the civilian boat in the perspective of the Civilian rescuer, rescued, but we also see him in the boat in the young soldier’s perspective. This does not provide a realization, or in other words, adds anything to the plot that we did not know about. We already knew what had happened to that character. The reason is simple. Dunkirk is not a film with layered plots, and in this particular scenario for Dunkirk, the nonlinear approach seems a more stylistic choice than an accentuating method, a choice that could have been avoided as it creates confusion and betrays the minimalistic nature of the film.

Everything Else We Have On Christopher Nolan