Irreversible (2002): Alex (Monica Bellucci) feels suffocated and desperately wants to leave the party. Her new boyfriend, Marcus (Vincent Cassel) is too immoderate with his indulgences. His drug intake and coquetry seem to be out of hand, which embarrasses her. Her ex-boyfriend, Pierre (Albert Dupontel), is masochistically curious about them, which makes her uncomfortable and therefore she abandons them both by deciding to leave the party and return home. On her way back, in an underground tunnel, the act that will destroy and possibly end her life takes place.

Gaspar Noe, the director of ‘Irreversible’ expressed his desire to tell its story in reverse because of Memento’s contemporary popularity. It’s a reasonable enough desire as every time a film with something unique that clearly works comes along, imitation becomes a dime a dozen. The question that the reverse narrative raises here is if it’s a story that works without it. Narrative structuring is an extremely delicate aspect of screenwriting which often cannot stand the test of heavy experimentation. An unique idea, like telling a story backwards in this case, is deemed to be strong only if the story itself has a degree of efficacy without it. If it fails when put into a traditional structure, the idea is reduced to a gimmick. It’s hard to make a case for ‘Irreversible’ in that regard as without the reverse structuring, the film becomes a rather straightforward doomed rape-revenge story. Noe is aware of that and therefore uses this technique for a devastating exploration that assaults the senses of the viewer as opposed to only an exercise in narrative experimentation.

Similar Read: Irreversible (2002): About Time and All That It Destroys

Looking at the narrative in a chronological order, premonitions abound in this story. Alex’s fate is portented through innumerable symbols that are littered across the final third of the film which technically is the first act of the plot. In Alex and Marcus’s apartment, a poster of ‘2001: A Space Odyssey’ hangs above their bed. Its ideas about human evolution and the emergence of a new, higher race, when reduced to its bare bones, becomes a story about conception and childbirth. Alex’s pregnancy, as we find out in the end is meant to exponentially worsen the shock of her rape, which was heavily disturbing as is. The poster then, aside from a slant reference to Noe’s own totalitarian filmmaking which is reminiscent of Kubrick, menaces the intention of the story being stretched to that point in the day instead of ending earlier. It both informs us of what we are to find out soon enough and also further deranges what we have witnessed and are therefore privy to.

There also is a poster there of ‘The Killing’, Kubrick’s sophomore feature which is about a heist whose outcome renders the enterprise a complete failure. Its depiction of the failed aspirations of Sterling Hayden, when the suitcase full of stolen cash just bursts open and flies away on the tarmac in the final scene, evokes the ruined aspirations of Alex and Marcus which they go on to discuss in that scene, that of starting a family together in case she is pregnant.

When Alex is lying in park, we see her reading J.W.Dunne’s ‘An Experiment with Time’, a text that scientifically tries to establish the ability of dreams to foretell individual futures. Alex reveals to Marcus that she had been dreaming of passing through a red tunnel in her dream which then suddenly divided itself into two parts. When Alex is raped, the tunnel has red walls and her trauma in its wake divides her life into two halves, one before it and one after, or even that of life and death as she is comatose when first seen, or technically, last seen. The book talks about the nature of time and how in waking, we lose perspective of time in the way science envisions it. For Alex, to not be able to pay attention to what she has dreamed of despite being the only character in possession of the tools needed to dissect her dreams is only another way to show the fatalistic nature of what she is to experience.

Another hint, which is a prominent aspect of the film, is the colour red. It is a predominant hue in all of Noe’s works and here, it carries itself over from its predecessor, ‘I Stand Alone’ whose protagonist also makes a cameo. When we look at the three most crucial scenes of the film, the colour red is always present. In the bedroom just before the party, the colour looms over Alex and Marcus but in a light tint. When Alex is in the tunnel, the walls of it are a stimulating shade of red, as if teasing the horror of what is to happen in an improper fashion. Alex is engulfed in red throughout this scene. Interestingly, Alex’s dream that she talks about to Marcus has her passing through a similar red tunnel. By the time Marcus is in the nightclub ‘Rectum’, all characters are drenched in that shade as the devious light carpets them. This infernally lit location is also the site of the film’s first horrific scene

Related Read to Irreversible (2002): Climax (2018): The Greatest Cinematic Experience Of The Year

In the final scene, a hue on the opposite end of the colour spectrum, green, is dominant. The implications of fertility and wealth that it symbolizes and negating the fury of the red till that point, alongside the number of children playing there, becomes a dirty joke at what is in store for Alex. Noe’s unscrupulous sense of humour is a recurrent aspect of the film of which this is a prime example.

It begs the question then, with Noe’s predilections for foreshadowing, as to what is the purpose of ‘Irreversible’? Alex’s rape being fetishized through its duration has long invaded discussions over it, yet it hardly qualifies as a reason for the existence of the film. Noe himself is too original an artist to make a film simply because he was intrigued by a fellow filmmaker’s successful restructuring of film narrative. The answer then, in all probability, is a desire to show fatalism in its most fervent form, its purely destructive ability, stripped off the common desire to use it as simply a medium of suspense. 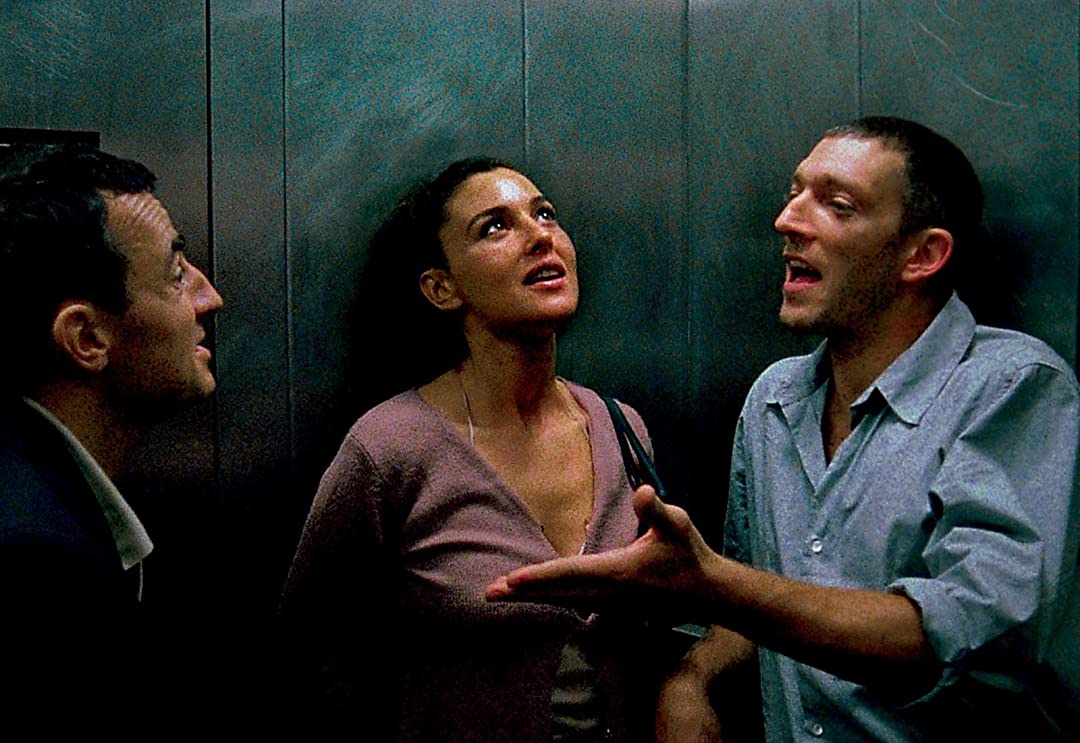 As the plot of ‘Irreversible’ keeps going back, the premonitions that foretold Alex’s fate appear to us in reverse. Instead of us looking at the film to connect the dots it had provided us with from the beginning, we are made to face them in the wake of the catastrophe they presage. In film or theater or literature, foreboding signs are meant to warn us of an impending disaster, and in their cryptic nature, they ensure that the forewarning does not end up influencing what one is being forewarned about. And while they become auguries for characters, for the audience, they are breadcrumbs that an attentive viewer will notice from the beginning while the rest will use in retrospective analyses. This exact conception of tragedy, which is always foretold in some form or another, is being dismembered by Noe.

Alex’s tragedy is one we witness first through its violent aftermath. Then, we view the incident itself. By the time we are viewing the incidents leading up to it, we are already clearly aware of what is to happen to the characters as we helplessly see them march towards it. Now obviously, in no art form other than video games can the audience influence the actions and Noe especially takes sadistic pleasure in this knowledge. The sheer ruthlessness of Alex’s rape magnifies our commiseration in the following scenes. ‘We know what is going to happen and yet there is nothing we can do’ is the exact feeling that Noe is exploiting. Then, through dreams and symbols, as the warnings keep surfacing, the fatalism in question explodes into an unspeakable terror through the revelation of Dunne’s book. If dreams are precognitive visions of the future, then it means that Alex is herself the inadvertent author of her tragedy.

This anatomizing of the concept of fate is the true horror of ‘Irreversible’. The exploited feeling worsens with the realization that clues were there throughout for her to have noticed. In tandem with the final words ‘Time destroys everything’, the passage of time is all that brings Alex to face her fate. She is not being avenged or punished, but is only allowing time to carry out what has already been deemed as her future. Alex, like a protagonist of a Greek tragedy, is faced with a nemesis that she cannot escape and she accepts its devastation without questioning it. In a final twist of fate, Marcus, in his bloodlust, fails to beat up the actual perpetrator and ends up horrifically injuring someone else by mistaking him to be Tenia, then ending up beaten and injured himself. While his ‘revenge’ would anyhow have amounted to zilch, the failure to carry it out deprives the audience of any semblance of appeasement.

The final scene, chronologically, shows ‘The Butcher’ from ‘I Stand Alone’ mention to a companion that he indeed acted on his feelings from the end of that film, and fornicated with his daughter, leading to his incarceration. Incest therefore becomes the final nail in the coffin of a certain people’s complete degeneration into a nauseating depravity. This repeated structural denial of any form of catharsis and the constant surfacing of filth is how we are made to recognize the severity of what we have viewed.

The screen does not cut or fade to black at the end but instead shows a strobe effect which continues to blink longer than is expected and makes us turn our eyes away. Alex’s fate is sealed and in the final moments of the film, we see her in an indeterminate period in the past where she is at peace, a feeling she is to be stripped off for life in the near future. This knowledge of which we are in possession then becomes a burden and in ending the film with the strobe effect, the horror in store stops being something comprehensible and is instead reduced to an unfathomable, epilepsy inducing series of flashes of blinding light, forcing us to look away from the screen and as if posing a question to us, the audience, ‘Haven’t you seen enough already?’

The Suicide Squad [2021] Review - An Optimistic orchestra of Exploding organs