How Oliver Stone’s JFK Proved The Unprecedented Power Of Political Filmmaking: There’s a widespread belief among the masses that the word “conspiracy theory” was invented by the CIA, in order to disqualify those who questioned the official verdict of John F Kennedy’s assassination and doubted that his killer, Lee Harvey Oswald, had acted single-handedly. This, however, remains a conspiracy theory on its own. Oliver Stone’s 1991 film JFK, tackled this conspiracy theory during a time when the term wasn’t just used for clickbaity purposes in order to over sensationalize things. That doesn’t mean there wasn’t any sort of gumbo-filled mumbo jumbo going around at that time. But almost every American knew that their government was hiding something, which became increasingly more evident with the authorities’ constant repudiations of these conspiracies. The assassination of John F. Kennedy that took place on November 22, 1963, to date remains the fishiest political murder in the history of US politics.

In the star-studded film, Kevin Costner plays the lead role of the New Orleans D.A. Jim Garrison. He believes that the Warren Commission’s report which claims one single gunman shot down JFK that noon, is untrue. In Garrison’s eye, Shaw was merely a cog in the larger machinery of the corrupt system that was trying to cover the truth. This further led him to launch a widespread investigation, eventually prosecuting one New Orleans citizen Clay Shaw for the crime. Unlike Spike Lee’s Malcolm X which came around the same time, the screenplay for JFK by Stone and Zachary Sklar, presents itself as a case. This is a film that works partly as an investigative thriller and partly as a reconstruction of sorts of important historical events. Through his protagonist’s lens, Stone objects to so much of what the Warren Commission had missed. In an interview after the film’s release, he said that around 140 pieces of the Commission evidence had been deconstructed in his film.

Also involved in this political thriller are other unorthodox figures like David Ferrie (Joe Pesci), as a hypertensive co-conspirator, the small-time mobster Jack Ruby (Brian Doyle Murray), and of course, Lee Harvey Oswald (Gary Oldman), a character who sets off the main series of events. The film opens with a first act resembling that of Citizen Kane’s; one with a montage of newsreel footage laying the groundwork for what the viewers are about to witness. Through the documentary footage and its careful reconstruction, most of the key elements that led to that unfortunate 1963 event are laid out. We see Dwight D. Eisenhower referring to the ‘military-industrial complex’ and along with that, we also get a sense of what was at stake. The possible influence of Castro through Latin America, the removal of his Communist regime from power in Cuba (operation Mongoose), anything and everything from these events could’ve been a key contributing factor to what eventually transpired. 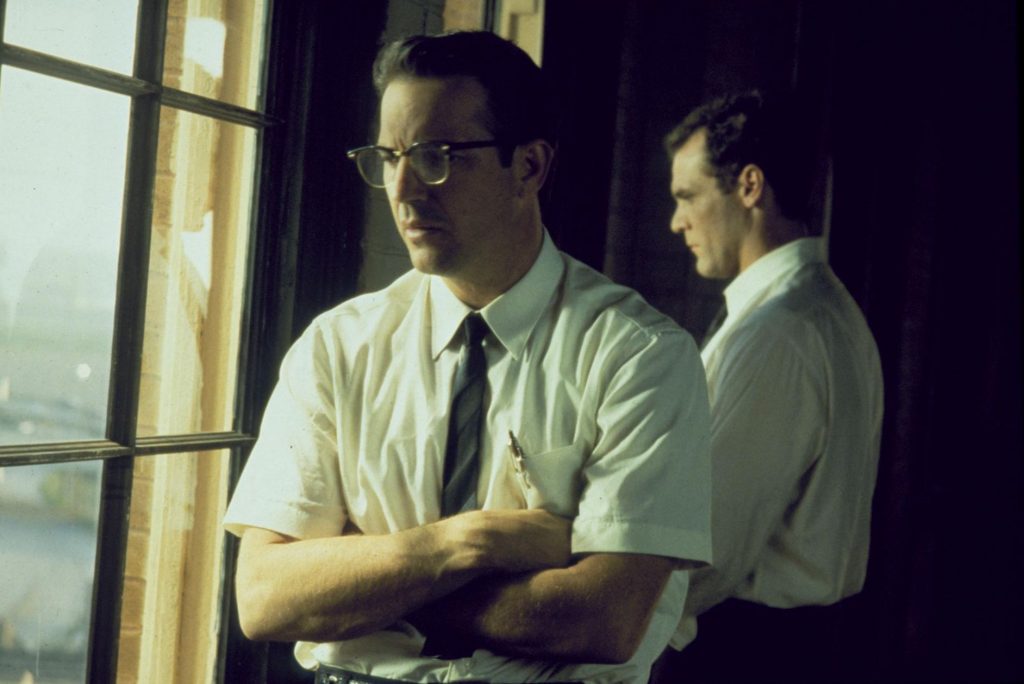 During times of desperation and political upheaval, the courage of a common man to question in the face of an entire system is what keeps the principles of our modern Democratic institutions intact. Kevin Costner channelizes all those emotions into his portrayal of Garrison, the ultimate seeker for truth, without ever going overboard. He embodies the real-life imposing personality of the District Attorney to a great extent. His conviction in the courtroom in the last act of the film (notice how his voice breaks at a point) to date remains one of the most powerful and resonating last acts in the history of political filmmaking. There are even echoes of it in a recent film that got an Oscar buzz earlier this year, Aaron Sorkin’s The Trial Of The Chicago 7. Jim’s wife, Liz (Sissy Spacek) shares the frustration she has with her man at a point in the film. Looking at her husband who’s so consumed in the agony of finding answers from the self-serving establishment in the name of righteousness, she breaks down in tears. Oliver Stone directs even moments like these with such care that they don’t bog down the overall pacing or the tone of the film.

John Williams’ score, which was actually composed way before the film, accentuates the tension. With effective use of shrieking strings, it successfully builds up the conspiracy paranoia. The score builds and builds until it reaches a crescendo in the film’s extraordinary last act. It almost plays out on so many of the horror movie tropes in order to achieve that tension. Five years after Clay Shaw’s death, the CIA had admitted that Shaw, despite his sworn denials during the trial 10 years ago, was indeed an employee of the CIA. According to a survey, about 56% of Americans thought it was a conspiracy back then. Later, after the film’s release, it was found that 80% of the people believed the government was hiding something. This is something that needs to be attributed to Stone’s extremely effective and hyperbolic style of filmmaking. He said in the director’s commentary, that his aim through the film was to create a counter-myth to the myth of the Warren report. And these numbers showed, how well he had succeeded in doing so. Clearly, Oliver Stone wasn’t just responding to the cultural shift and status quo of the time, he was also shaping it.

When it comes to narrative cinema, there is always an implicit contract between the filmmaker and the audience that one should be aware of going in. People go into films expecting compelling stories, even if they’re at times exaggerated for thematic purposes. There are already enough sources and means out there to fetch the factual data. In 1993, the National Archives workers wheeled out boxes stuffed with more than 8,00,000 pages of once-secret documents. This proved that the film wasn’t just made to appease conspiratorial fantasies. Stone wrote, some years after the release of the film, “The counter-evidence was still being stifled. There’s Soviet-era manufacturing of history in which the mainstream media deeply discredits our country and continues to demean our common sense.” Almost 24 years after that, Donald Trump in an unexpected tweet announced, “Subject to the receipt of further information, I will be allowing, as President, the long blocked and classified JFK FILES to be opened.” But this still wasn’t enough, as some 19,045 documents were released, but 15,584 still had some information that could be withheld through 2021.

The Kennedy assassination documents must be fully declassified by October 26, 2021. Will Joe Biden release the JFK Assassination Records? We don’t know for sure. What we do know, is that JFK created an unprecedented impact on the US public and its government. The film won two Oscars out of the six it had been nominated for, but it didn’t just stop there. It actually led to congressional action. The film’s real-life ripple effect is still evident, more than half a century later.