Home»Essays»Once Upon a Time in Calcutta (2021): How to Survive in a Rapidly Changing Megalopolis?
Essays

Aditya Vikram Sengupta’s third feature ‘Once Upon a Time in Calcutta’ is a proper film, though not properly named. What is meant by ‘Once Upon a Time in Calcutta’ requires broad coverage of the city of Kolkata. It is necessary to capture the period of roughly twenty-thirty years in the context of the narrative to understand the transformation of the city. Such as Wang Xiaoshuai’s “So Long, My Son” (2019). This film is based on a lower-class Chinese couple. Through the Cultural Revolution of the 1970s, the one-child policy in the mid-1980s, and strict communist regulations, the country experienced a touch of globalization in the ’90s, and every city began to change accordingly. When the couple returns to their hometown in the new century, everything seems unfamiliar to them. Younger friends are lost. A time of living well is long gone from their lives. “Time stopped for us a long time ago. Now we are just waiting to get old.” If our ‘Once Upon a Time in Calcutta’ had shown Kolkata to such an extent, the naming might have been worthwhile.

This film follows the life of a bereaved mother trying to desperately find a new identity, love, and independence, but soon realizes she’s one of many in a city filled with hunger. The mother’s name is Ela. After the death of her only daughter, Ela resolves to leave her husband Shishir, and move out of their residence. Ela’s journey is guided by the reawakening of an old flame and an alluring offer from the head of a building project in a satellite city on the outskirts of the metropolis. The manner in which the character is drawn will take the audience a long time to feel an attachment to her.

Why is Ela like this? Her daughter died recently. Then within a few days, she is able to overcome that sorrow. She wants to get a loan, but can’t get it. Her step-brother Bubu has a huge house in North Kolkata, which once housed theatre- cabaret dances etc., which is now defunct. Ela’s desire is to somehow convince Bubu to sell the house. Failing in that task and being helpless, Ela has to agree to the evil proposal of her company’s boss. The fact that so much is happening in Ela’s life doesn’t affect her much. But on the other hand, we see Raja being influenced a lot by his surroundings. Raja is Ela’s acquaintance, a chit fund agent, who has done his job honestly so far. But when the company is not able to pay the customers, everyone starts pressurizing Raja. He is hiding, locking the main gate of his house and entering through the back window, always in fear. Ela and Raja― these two characters are like standing on opposite ends of the poles. Why is that so? Why do the main characters of the film behave like this? The answer lies with the dinosaur that didn’t survive. 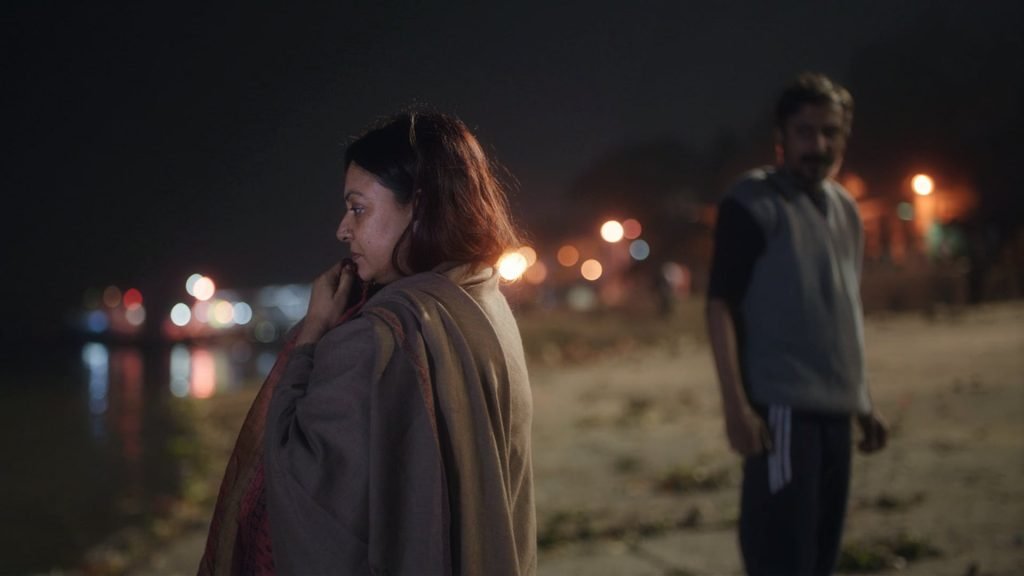 Neither in prehistoric times nor in the new city of Kolkata. A dinosaur statue in Science City was demolished as a flyover was to be built. The new comes and pushes the old away. Dinosaurs, settlements, old houses, music, people. One by one everything old has to be lost in the change of time. But Ela didn’t want to get lost. She wanted to survive, wanted to forget all sadness, all shame, and live. So, Ela is smiling even in adverse situations. When she cries, she holds the tears in her chest. At the end of the film, when the entire city is covered in darkness, she still sits still. Sitting in front of the TV in the new apartment, she does not break down after hearing such terrible news. Finally, she is forced to call the local leader of the ruling political party and ask for his help in overthrowing her brother. Ela does not want to be erased from this metropolis in any way. On the other hand, Raja wants to survive but knows nothing about the methods of survival. And that’s why terror, panic, and fear come to his mind. Finally, he left the city.

Ela’s brother Bubu may not have wanted to survive. Time has long forgotten him. A crazy man is trapped in the memories of the past in such a big house. The past has no value in this new city and so Bubu has no value. The beautician Pinky is a lot like Ela. There is no known alternative but to survive. So even though she was supposed to run away with Raja, she hesitated to leave home. And there is Ela’s husband Shishir. This character is also very similar to Bubu. Shishir has not yet died or fallen behind in time. But even he has no urge to change himself to the rhythm of the changing city. He doesn’t mind his wife’s activities because he knows that Ela has to survive at any cost. Shishir and Ela both have grief in their lives. But Shishir is not like Ela.

There is another reason why Ela is so uncompromisingly changing with the times. One of the reasons why her conscience is not pricked may be that she has grown up in a different environment since childhood. Ela and her mother are each other’s alter egos. Ela’s mother was a cabaret dancer. Bubu’s father fell in love with Ela’s mother when Ela was a child. That’s why Bubu-da’s mother committed suicide. The director did not give a clear idea of how much this incident affected the four characters― Ela, her mother, Bubu, and his father, but the director left some hints. Bubu became insane, and Ela could not forget her mother. As a child, Ela did not get a chance to get close to her. In the evening. her mother would go dancing, and Ela would be sad to not have her mother. Once Ela went to the cabaret theater of her mother with a family member. Standing in the green room, Ela watched as Maa dressed up and stood on the stage, and the stage slowly rose up, much closer to the audience, far above the insignificance of morning guilt below. Ela’s mother was also surviving, maybe by ignoring her conscience. No one in Aditya Vikram’s Kolkata is honest in a poetic sense.

As a result, Ela made herself constantly harder. Calcutta has shed its skin and dressed up in new clothes in keeping with the demands of the times. There is no nobility or sincerity in that outfit. The same is the case with Ela. So are the rest of the members inside the aquarium. And so non-living things like dinosaurs couldn’t survive. Flyover took its place. The coexistence of the old with the new no longer becomes. The well-known Rabindra Sangeet has turned into a disco song at the same time. The overcrowded Sarkarina Theater gradually turned into rubble. Even the termites on the wall have to leave the wall one day. Now it’s just showmanship. An order came from the government to plant thousands of Rabindranath sculptures across the city. Rabindranath is now a commodity in the new city. The film makes the audience think a lot. Even if the audience does not form a traditional attachment with the character of Ela, they also sympathize with her. The fact that we are still alive, maybe there is some Ela hidden in us somewhere. This is how we survive by compromising. If we wouldn’t compromise, we might all turn into dinosaurs. And then everyone would disappear from the city.

Once Upon A Time in Calcutta Links: IMDb, Wikipedia