Cyberpunk: Edgerunners (Season 1): Review, Recap, & Ending Explained: The open world of Cyberpunk 2077, one of the biggest role-play action games of 2020, is vast and entrenched in lore. The game’s protagonist, V, serves as a window into the dystopian megapolis of Night City, which is governed by its own socio-political strata. Netflix just dropped Cyberpunk: Edgerunners, an anime series based on the world of Cyberpunk, which aims to deepen the lore of the existing game while offering a riveting, high-stakes standalone story. While Cyberpunk: Edgerunners mimics the aesthetics of ’80s anime, the story feels timeless and more relevant than ever.

Before we deep-dive into the story, it’s ending, and how the anime fares as a cautionary tale about human ambition and capitalist greed, there are massive spoilers ahead, both for Cyberpunk: Edgerunners and Cyberpunk 2077.

David Martinez is a street kid in Night City who lives with his mother and is geared towards becoming a corpo at Arasaka (a megacorporation with a hold over the city’s prime resources). Despite being a top student at Arasaka University, David is bullied by his peers, who look down on him due to his humble origins—the sheer idea that a street kid can make it big in the corporate world is inconceivable to the rich brats. Anyhow, David isn’t interested in being an Arasaka corpo; he is simply fulfilling his mother’s dream because she works extremely hard to make ends meet barely. 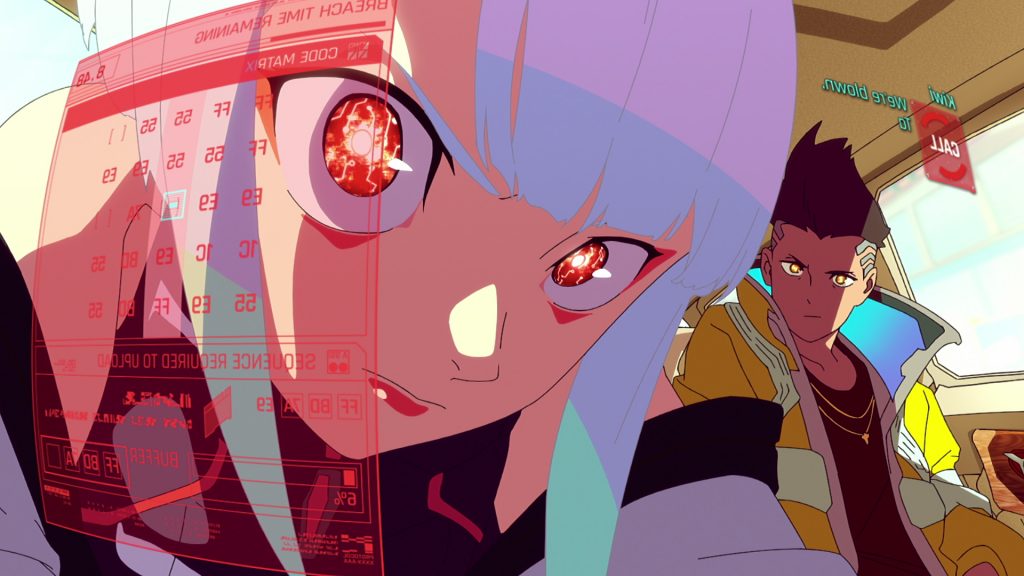 Tragedy ensues after David and his mother are caught in a crossfire between two rival parties on the streets, which leads to Mrs. Martinez’s death. This understandably overturns David’s whole world, as he is unable to process the grief that comes with such an acute personal loss, which is accentuated by the burden of earning enough to make a living. Among his deceased mother’s belongings, David finds the Sandevistan cyberware, a highly-unstable cybernetic implant granting superhuman speed to the user. After failed attempts to sell the cyberware for money, David decides to use the implant himself, which acts as a catalyst for the events of the series.

Those aware of the mechanics of the game will have a blast with Cyberpunk: Edgerunners, as the series, not only expands an already-rich world but also provides meaningful commentary that complements the core ideas of the game. The world of Night City is ruthless and innately capitalistic, and the only way to survive is to move up the ranks of the lifestyle one chooses quickly. As David is no corporate sellout but someone who does not fit into the accepted notions of society (also due to economic disenfranchisement), he has no option but to become an edge runner or mercenary outlaw.

After David meets Lucy, a gifted net-runner who introduces him to her crew, he starts assisting them in gigs, using his Sandevistan to overpower targets. It works remarkably well but at a great cost: overuse of the Sandevistan takes a heavy toll on David’s body, and the ripper doc who treats him frequently warns him that he’s well on his way to cyber psychosis, which almost always leads to death. Will David take the self-preservation route, or will he race toward the finish line in an attempt to become a Night City legend?

WHAT IS THE TRUTH ABOUT LUCY’S PAST?

Lucy, who is romantically involved with David, is forced to take the mantle during a high-risk mission that involves extracting sensitive files from Tanaka’s neural net. After deep-diving, Lucy stumbles upon top secret information that involves Arasaka’s plans with David but decides to work alone in order to put a stop to Arasaka’s plans. In a heart-to-heart with David, Lucy reveals that she used to be an Arasaka net-runner and that the megacorporation used kids like her to extract legacy information about the old net that was dismantled 50 years ago. It explains her utter distrust towards Arasaka and her innate need to protect David from harm.

WHY IS DAVID ACCELERATING TOWARDS CYBER PSYCHOSIS?

Cyberpsychosis is a mental illness that occurs due to an over-reliance on cybernetics, which drives the user to madness and leads to the irrevocable loss of humanity. David’s crewmate, Maine, undergoes cyber psychosis during a mission and kills numerous MaxTac members and NCPD officials. David is also on his way to experiencing cyber psychosis due to the heavy use of the Sandevistan, along with other mods/implants in his body, which becomes more mechanized as time progresses.

As cyber psychosis also leads to gradual mental degradation, David starts experiencing the symptoms as the anime unfurls. Everyone around him, including Lucy, asks David to take a breather and stop before things become dire for him. However, David has a heavy burden to carry: he’s haunted by the deaths of loved ones and needs to move up the ranks of edge running to make a name for himself. He’s constantly living out someone else’s dream, disregarding his own needs, be it physical, emotional, or psychological.

Faraday, the fixer who provides David’s crew with gigs, sells himself out to Arasaka due to corporate greed. Moreover, unbeknownst to the crew, Kiwi, the crew’s primary net-runner, is in cahoots with Faraday and gears them towards a trap laid out by Arasaka. Arasaka and their rival, Militech, are vying for a special piece of cyberware called the cyberskeleton, which can be used as a weapon to monopolize cyberware and weapons manufacture in Night City and gain unanimous control of the city. While Arasaka has access to the cyber skeleton, they need a worthy test subject for the same. As high-risk cyberware is incompatible with most people, David emerges as the obvious candidate due to his resistance to Sandevistan’s dire effects.

Lucy is aware of the plan, as this is the secret intel she had managed to uncover in Tanaka’s neural net. While she does her best to subvert this operation, she is betrayed by Kiwi, who lures her right to Faraday. The fixer holds her hostage and uses her as a bargaining chip to negotiate terms with Arasaka. Lucy is an asset for Arasaka, as her neural net contains key information about the old net from her net running stint for the company. Being a runaway, Lucy is also a major liability for the company, as she can easily enter their mainframe and hack into sensitive information that they intend to keep under wraps.

Arasaka’s grand plan is to lure David into a chamber and force him to integrate with the cyberskeleton, which would help them use him as a pawn for their own ends. While David is tricked into doing this, he is heavily unstable, teetering on the edge of cyber psychosis, and his immunosuppressants are on the verge of running out. Rebecca, David’s crewmate, tries her best to keep him stable as long as possible, but it becomes apparent that David’s ambition is undoubtedly a one-way ticket to legendary martyrdom. 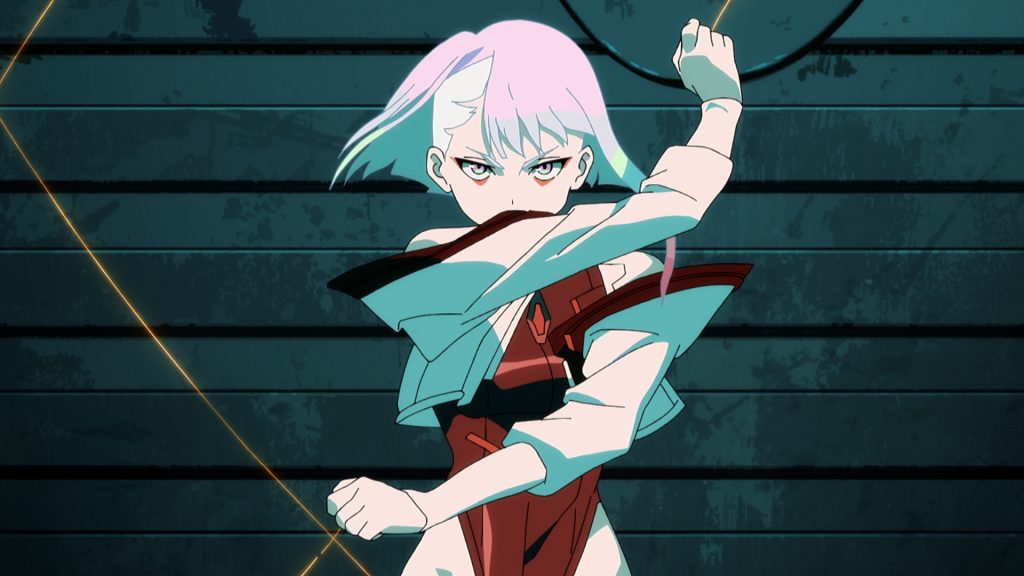 As Faraday’s theatrics prove to be detrimental to Arasaka’s political maneuvers, they decide to eliminate David with the help of Adam Smasher, the legendary full-borg solo mercenary. Meanwhile, Lucy is being dangled by Faraday in front of Arasaka executives, and David arrives on time to save her. Adam Smasher reveals himself, and the two engage in an escalating fight while Lucy is safe in the car with the crew, who fend off Arasaka’s bullets. However, after Smasher kills Rebecca, David and Smasher fight to the death, and the former succumbs to cyber psychosis.

Despite his perseverance, David is no match for Smasher, and the latter kills him. But David has no regrets before dying, as he has accomplished what he wanted to: he dies a legend while ensuring that Lucy is safe and is able to go to the moon, as he left her with half of the funds from the gig. Years after the cyber skeleton incident, David Martinez will always be remembered in Night City.

Cyberpunk: Edgerunners is a beautiful, bombastic homage to the world of Cyberpunk 2077, with an endearing love story at its center. Lucy and David, broken as they are, did everything in their power to protect each other, and the latter embraced death after knowing that the only person he loved was safe. The series highlights the socio-political themes of the game, offering a commentary about the rich-poor divide and the greed that turns humans into self-serving beasts. Beneath the glamor of Night City lies a seedy, ugly underbelly of poverty, death, degradation, and madness, and in most cases, there is no escape.

The series’ aesthetics are top-notch, lovingly based on the games, and every frame is beautiful to look at. The colorful world of Night City captures its essence perfectly, and the bleaker aspects of the anime are portrayed in stunning, larger-than-life fashion. Much like V, David yearns to make it big: although their arcs are markedly different, their motivations are similar. There’s no escape from Night City unless you are graced with a stroke of sheer, dumb luck. And that is momentous, unlikely serendipity in a city of broken dreams.

Where to watch Cyberpunk: Edgerunners