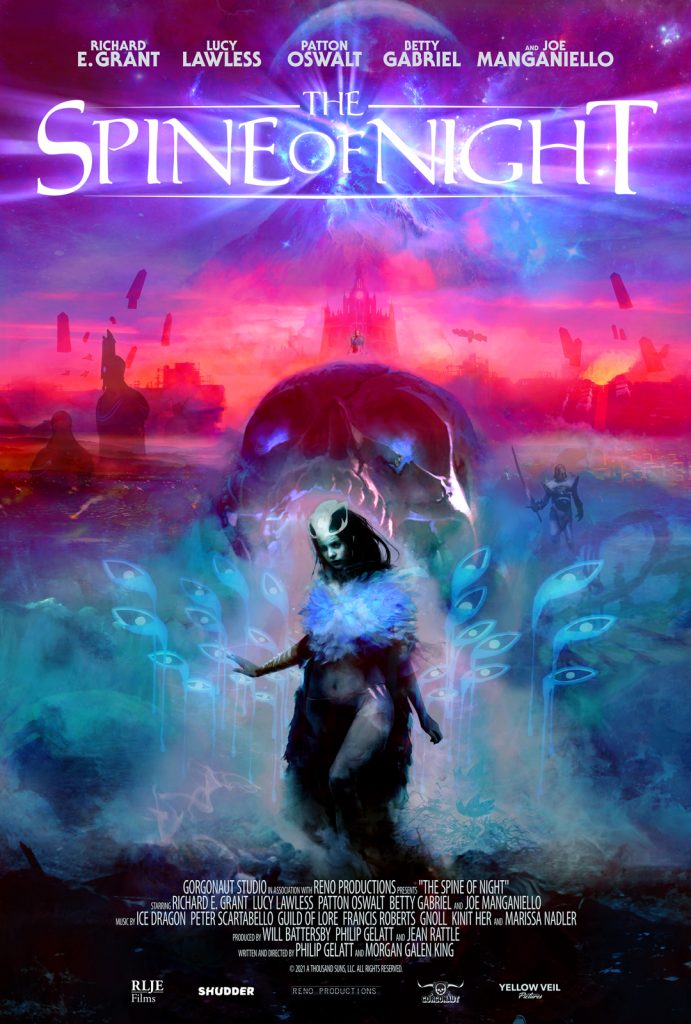 The Spine of Night Trailer: In this ultra-violent, fantasy epic, The Spine of Night, ancient dark magic falls into sinister hands and unleashes ages of suffering onto mankind. A group of heroes from different eras and cultures must band together in order to defeat it at all costs. The epic animated feature film “The Spine of Night” will launch globally on March 24th on Shudder, AMC Networks’ premium streaming service for horror, thrillers, and the supernatural. The Spine of Night will be available exclusively to stream on the platform in the U.S., Canada, the United Kingdom, Ireland, Australia, and New Zealand.

Beginning with a worldwide world premiere at SXSW in 2021 and a wide release earlier in the fall, this richly textured evocative dark animated fantasy, from a pivotal part of the team behind “Love, Death & Robots,” The Spine of Night tells an engrossing parable of greed. Surreal, strange, experimental, boundary-pushing and imaginative, The Spine of Night offers critics and audiences a unique palate cleanser from child-focused animation content.

The Spine of Night embraces the hand-drawn cult classic rotoscope animation fantasy, and is a tantalizing mix of “Conan the Barbarian,” and “A Scanner Darkly,” with an elemental edge of “Heavy Metal,” telling a spellbinding dark fantasy that spans the evolution of time.

About The Spine of Night:

This epic begins many years ago when an ambitious young man steals forbidden knowledge from a sacred plant and, as he falls to its darker temptations, unleashes ages of suffering onto mankind. As his power grows over the years, there are many who stand against him. Among them are a daring tomb-robber, star-crossed lovers, a maniacal necromancer, winged assassins, and an undying guardian.

The Spine of Night is an ultra-violent, hand-rotoscoped epic fantasy inspired by the cult classic works of animators Ralph Bakshi and Frank Franzetta. The film is set in a fantasy land ripe with magic and intrigue where a dark force is unleashed sending mankind into an age of ruin. It falls on heroes from different eras and cultures to fight back, and stars Richard E. Grant (Star Wars: The Rise Of Skywalker, Bram Stoker’s Dracula), Lucy Lawless (Ash Vs. Evil Dead, Xena: Warrior Princess ), Patton Oswalt (The Secret Life Of Pets 2, Parks And Recreation), Betty Gabriel (Get Out, Upgrade), and Joe Manganiello (Justice League, True Blood), also featuring Abby Savage (Orange Is The New Black), and Larry Fessenden (The Dead Don’t Die, Depraved) and Rob McClure (Person of Interest, Evil).