Why Hungama Hai Kyon Barpa is a Near-Perfect Tribute to Its Inspiration: When Musafir Ali (played by Manoj Bajpayee) walks into the train washroom after he recognizes his fellow traveler, Mr. Baig (played by Gajraj Rao), as someone he had stolen Khushbakt (the watch) from, the washroom detaches itself into empty darkness. We hear him addressing the thoughts in his head out loud as if he were addressing an audience gathered at one of his ghazal performances – the concoction of feelings acting up inside him is unnaturally shrouded by his unnervingly calm performative voice.

This was the moment for me where Abhishek Chaubey, famous for his directorial ventures like Ishqiya (2008), Dedh Ishqiya (2014), and Udta Punjab (2016), among others, elevated his rank among the other talented directors, Srijit Mukherjee and Vasan Bala, who came together to produce Ray, an anthology series inspired by the auteur Satyajit Ray’s remarkable short stories.

It is an otherwise uninspiring series with few lightning moments where extraordinary acting comes together with a mediocre script to produce a semblance of liking among the viewers, which, unfortunately, doesn’t last long enough. However, the third episode, Hungama Hai Kyon Barpa, stands out as a breath of fresh air after the first two episodes, Forget Me Not and Bahrupiya, both directed by Srijit Mukherjee. This episode is based on Satyajit Ray’s Barin Bhowmick-er Byaram (translated as Barin Bhowmick’s Ailment), and unlike the other episodes, it follows the story very closely.

The encounter between Musafir Ali and Aslam Baig plays out in the same setting as the original short story – in the first-class compartment of an express train bound to Delhi. Musafir, like Barin Bhowmick, is a professional singer and Mr. Baig, like Pulak Chakrabarty, is a man with a history and interest in wrestling. Chaubey follows the text closely to the extent that it borrows the conversation about the HMT watch, the order of a black tea without milk, the server’s fascination with the singer and his desire to please him, the fellow traveler’s wife’s love for the singer’s performance, the tinkling sounds of the teacups that the singer wakes up to on the morning his train arrives at Delhi, among others, directly into the episode.

But Chaubey also adds to these little details a context that is difficult to ignore if one has read Ray’s short story. For example, Mr. Baig adds few pieces of dried lime to his black tea served without milk. He doesn’t appear to be a man of refined taste initially because he recognizes Musafir as the “cassette waale” or the cassette guy” and constantly messes up the Urdu words of Ali’s song, misplacing the word for ‘goblet’ with ‘toilet’. His insistence towards having the tea with the dried lime slices adds a layer to his character that should have otherwise remained unexplored in the pursuit of allowing Manoj Bajpayee the majority of the screen time to act on his role as the protagonist. 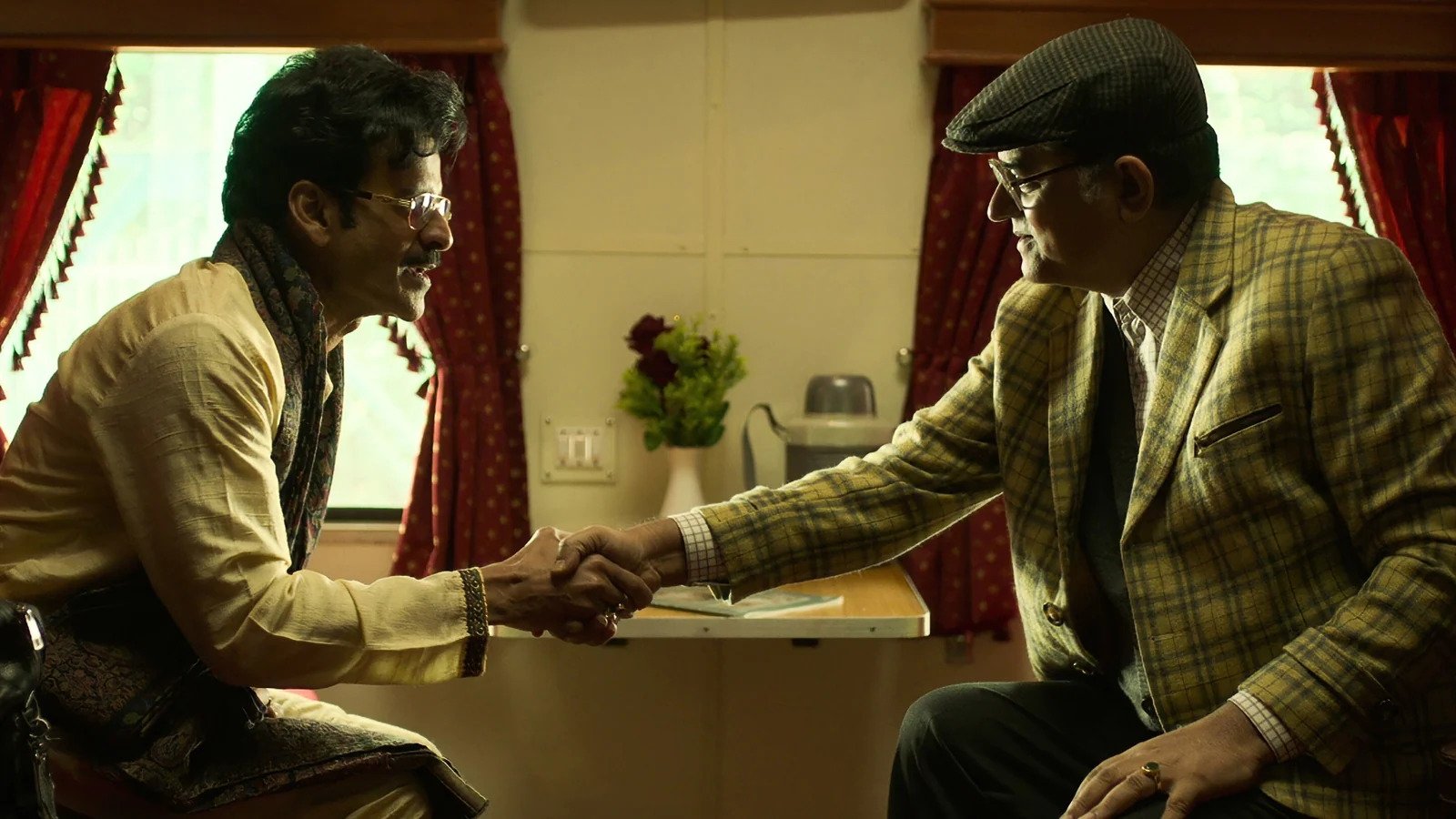 Considering the palpitating tension of being stuck in the same coach with someone you have stolen a precious watch from, the same tension that Ray’s story exudes, the script is dotted with funny moments that occasionally serve to ease out the sense of foreboding. These funny moments come together with the ticking of the clock in the background and the myriad facial expressions that both Musafir and Mr. Baig portray to create a visual engagement that the rest of the episodes lack in.

I loved the scene where Ali and Baig are seen seated above a giant clock dial drawn on the floor in an imaginary plane. Ray’s story does contemplate the possibility of this chance coincidence nine years apart, but Chaubey almost sets up the rectangular train berths on this clock dial to hint at the two hands of a clock that come together at least twice in a single day. Hence, the second encounter between them, in the same scenario. Srijit Mukherjee tries hard to play with the metaphor of memory and forgetting and appearance and reality in both his shorts. However, in both the episodes, he has directed, the metaphors are everywhere and can tend to feel claustrophobic to the extent that the real stories lose themselves in the fanfare.

When Ali finally confesses his crime to Baig, the tension releases itself almost comically because of Baig’s unexpected reaction to the confession. None of the other episodes serve to bear up Ray’s short story as this one does. Spotlight, directed by Vasan Bala, mostly wavers confusingly between mediocre acting and a hastily put-together storyline. However, the last ten minutes of the episode bring it down to Ray’s undisputed standard – average and underwhelming. It seems to be unnecessary and could easily have been summed up in few minutes. It feels dragged, and when the climax is finally arrived at, it almost feels like the audience is over it.

This sepia-tinted episode was a relief to watch after the grim darkness of the previous two episodes and a perfect transition into the blast of light and colors that the following episode brought along. I missed seeing the IRCTC-blues and whites that are usually synonymous with train journeys in India. However, through its sandy-colored tint, the episode doubles up to the theme of time and is well thought of. Manoj Bajpayee takes care to incorporate the nitty-gritty of Barin Bhowmick’s wide range of emotions into his acting and Gajraj Rao is more than believable in his character as Mr. Baig.

Although Ray disappoints its eagerly expectant viewers with unnecessary adages to the original stories, Hungama Hai Kyon Barpa, like Mr. Baig’s special Arabian Chai Noomi Barsa, is like black tea with dried lime – an acquired taste for the viewers’ palette.