Only Lovers Left Alive (2013) Movie Analysis: In this day and age, how are we always forgetting the true essence and the beauty of art, culture, world, and our surrounding? Everything has its own course. It has a rhythm. The age now is so different from the age centuries ago. It was simple. It was about greater things in life, non-materialistically. It was about the establishment of things that were beautiful, without disturbing the course of nature. Creation was the only hope and destination of that era. It was believed that the core of it all was to share it with everyone. One must learn, share, unlearn and then learn again. It was the only course of action.

With dreamy eyes, each of them created an art. Be it science, fiction, a theory, an action. It was all about unfolding nature and millions of possibilities one could learn from. There was love. It was always mutual. Love was the only passion. It was physical, and it was metaphorical. It created a time, which now we dream about. With that came pain and agony. The war came much later. The hatred came recently. Even though there was a melancholic feeling, there was love. It was never empty. The sorrow was embraced with love. It was about receiving anything and everything with love and rejoicing in it.

It is, now, an age of greed and class. It is more about achieving anything and everything, in the short span of time that we have on this planet. We are the zombies of this world and we are constantly trying to fit in this beautiful atmosphere. Today we are more curious to turn the stones into Gods, expecting and believing a positive result. We no longer have the strength to receive a negative outcome. We are the destroyers, the sole survivor who are happy making empty space into rotten hell. We are more into wanting, than sharing/giving.

We always have this feeling within ourselves. We are too scared to talk about it out loud. It is not natural anymore. We are not natural anymore. We are programmed. Programmed to function in a manner that is natural now. We breathe codes. We talk codes. We consume codes. Code, a function which is the way of life, now. The code is basically trash that we embrace happily and accept and celebrate it as love on a daily basis. 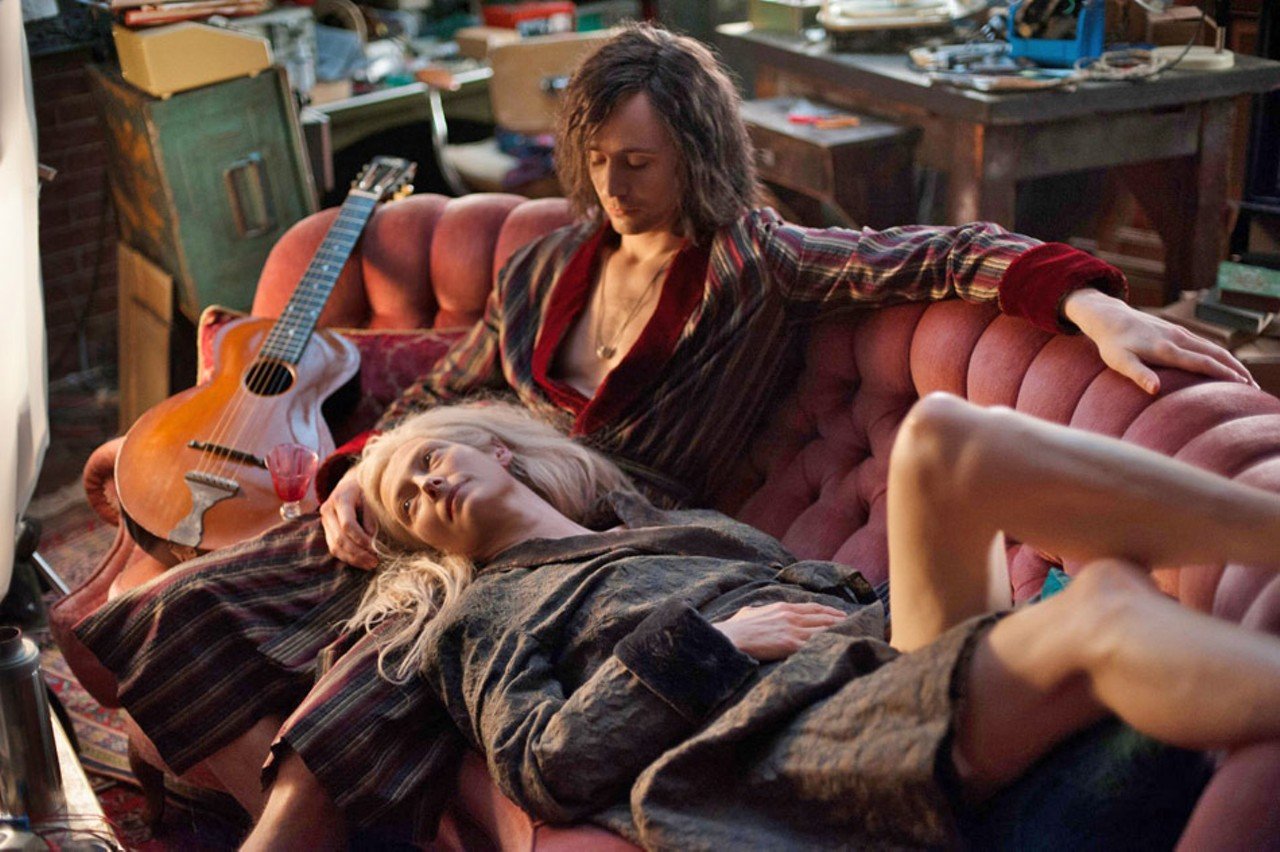 We are the zombies. Impure blood surviving with no compassion about life. We have no soul. We are trash – always running away in our lives. Seducing the pain to wither us, every day and night.

I watched the film for the first time after watching Paterson by the great Jim Jarmusch. And, I am still floating. I believe, it is a direct approach to the literal meaning of life now.

I wonder how does Jarmusch does it?

Take the opening shot of the film as an example. It is a dream-like sequence that induces us into the cluster of faded stars that change into a vinyl record playing on the turntable. The music seduces you and immerses you in it. As if you take a dive in the pool of water but in slow motion. This sequence gave me a feeling of going through a trance where I feel nothing and everything all at once.

As we are still mesmerized with the circular motion of the vinyl disc playing, we see Adam and Eve lying cold in their places, traveling in the cadence of the background score ‘Funnel Of Love.’ Adam and his wife Eve played by Tom Hiddleston and Tilda Swinton stay in two different cities away from each other, married for 3 centuries, and still in love. They are an unusual couple for the modern world, but we grow closer to them as we intensely invest our time into the film.

Ever wondered what must love feel like when it is centuries old? A culmination of all the life, passion, art, culture, and intimacy shared between the two?

Only Lovers Left Alive is a romance about loving slowly and appreciating the things around us. It is a literal definition of the change of time. It is about the characters who are the expression of life. Every frame in the film has a character in our history. The couch, the photo frame, velvet nightgown, the rare guitars, the wooden framed pictures hung on the wall, the books, every little piece present in the frame has a character that speaks for itself. In the comfortable silence of the rock music, that floats you away to another world; making you believe that you are tagging along but are long forgotten. 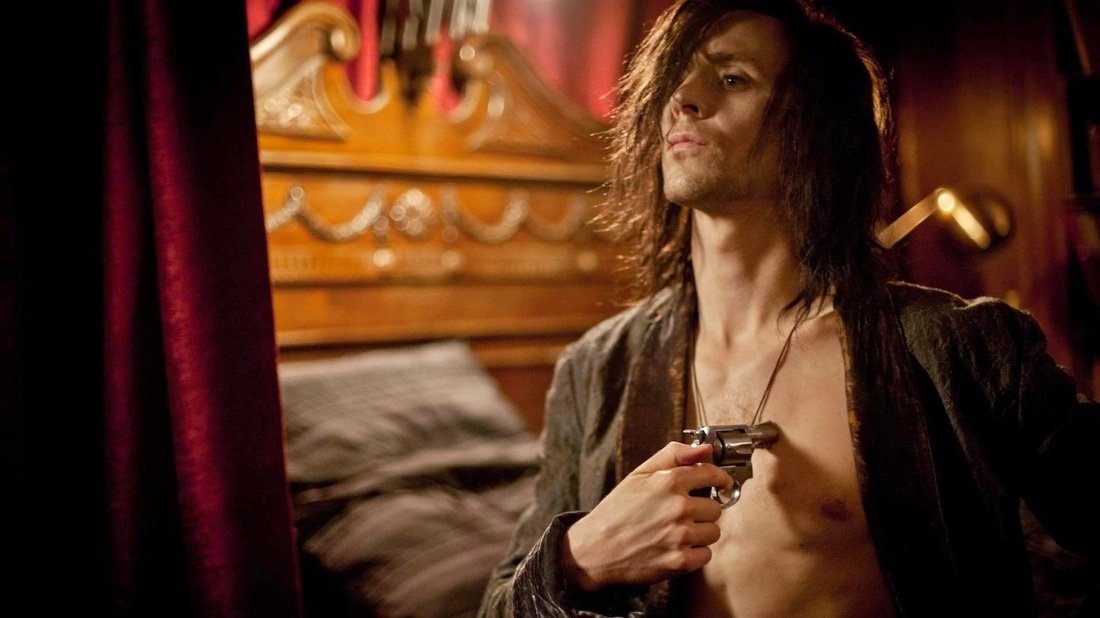 As Adam is contemplating his existence in this ruthless, heartless world, Eve is consoling her one and only friend Christopher Marlowe (John Hurt). As much as he shares his life wisdom with Eve, he still grieves about the betrayal he received in the world of art. Eve and Marlowe share the chemistry of confidants, a mentor and mentee. He is also her provider of ‘Rare French Supplies.’

The relationship of Eve and Marlowe is shown in a way to define the comfortable connection shared among two people with no worry about age and time. In a few scenes, they hold each other’s hand and share a glance which is an assurance that love (in any form) is still there.

Embracing modern love with such ease, Eve wants to understand what about the world, is disconcerting her husband. As they converse, she switches from a phone call to skype effortlessly. Whereas Adam is still living his life in the primeval times, connecting dialler phone to a remote control colored television. The scenes here are beautifully captured, and you feel a sense of euphoria each time you go back to them.

Related to Only Lovers Left Alive – Border [2018] Review: A Modern Folktale About Empathy

There is something about the film which is unbearably satisfying. The love and depth shared between the two are strangely what we all want, deep inside. We all are always yearning for such aimless conversations where we have no reason to look at each other, have a sense of belonging, an assuring touch, and have no fear as far as we exist in the same plane as the other.

In the second act of the film, Ava (Mia Wasikowska), Eve’s wold sister joins them. She is a stubborn, tantrum-throwing teenager who does things that makes Adam cringe, even when her name comes up in the conversation. The slow-paced film takes a jump in tempo with Ava’s entrance. She is floating everywhere with her adamant attitude and love-hate fight with her brother-in-law Adam.

The film is shot only in the night, with empty streets of the city, old classic to rock vinyl record playing, a whole lot of books scattered here and there on the floors, guitars from every era adorned in the rack or the shelf in the background. They complement the scenic beauty of each shot that Jarmusch decides to include in the film. 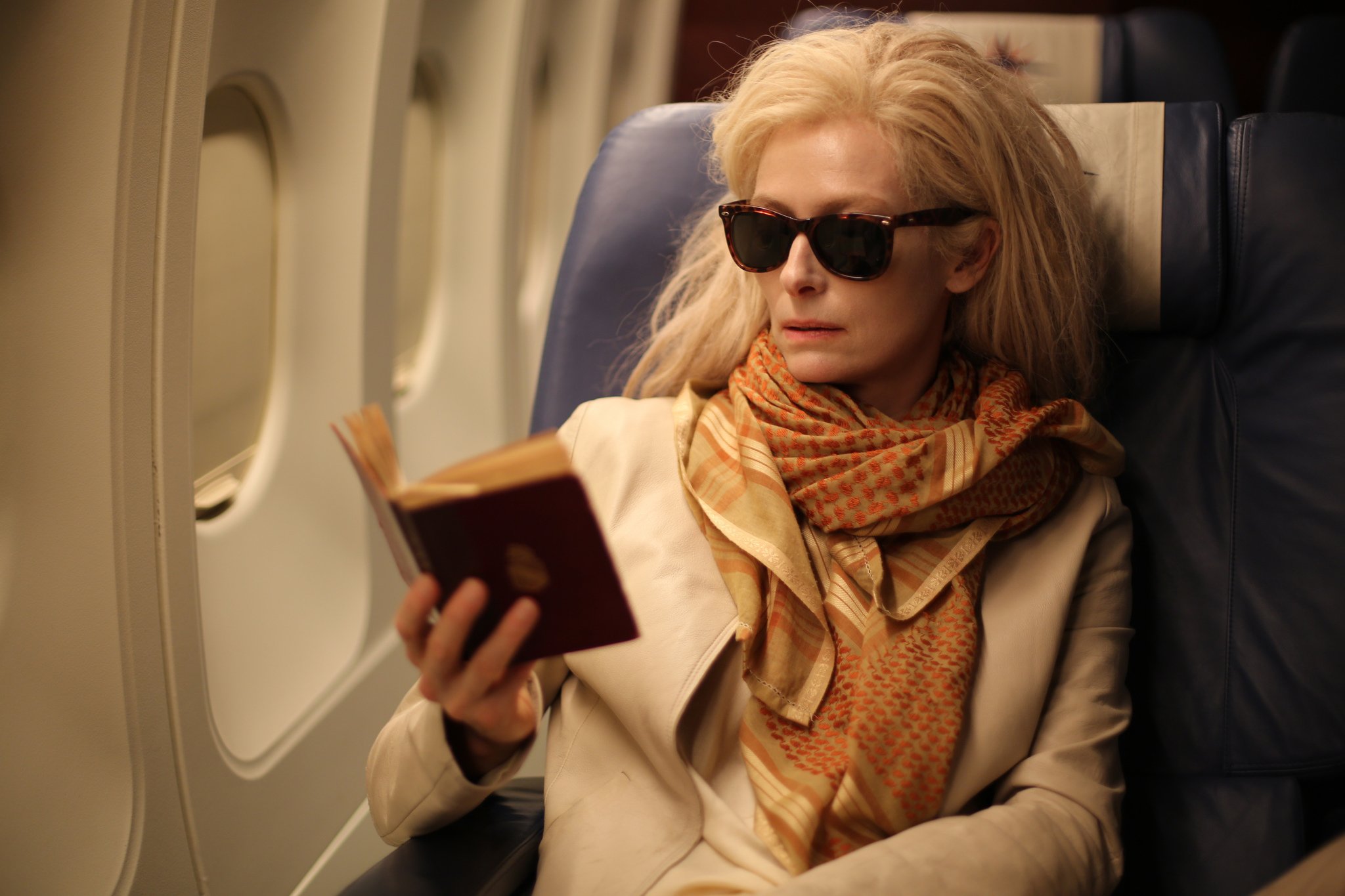 Adam’s house has a personality of immersing itself into the deep ocean of music notes, whereas Eve’s is a profound celebration of knowledge and wisdom from around the world. There are several shots where the focus is on the sync of the vinyl disc rotating which shows that time moves on with no stop to it, and the two lovers have no rush about anything in this world.

Jarmusch has created a place where amid the atrocities, these two people still reside in a world of their own creation. Their way in life is all about appreciating the life that art and creation have to offer us.

Only Lovers Left Alive also has the power to convey its notion to its audience with the music. Every moment is carefully punctuated with musical cues or dialogues that make sense in their own way. The score composed by Jarmusch’s own band ‘SQURL’ has a deliberate effect on the viewer. The choice of using blood-red vinyl record playing in the opening shot is a clever piece of foreshadowing that foretells us the kind of ecstasy we are about to consume.

A pretty one-of-a-kind vampire film; Only Lovers Left Alive is no Twilight edition of romance and cuddly love. It is a tale of romancing over the essence of love, trust, values, an act of creation, and destruction. It is a film of substance, of nostalgia, a no-fuss vampire fairy tale about two lovers who are surviving in the world of greedy zombies (read: humans).

Jim Jarmusch presents to you Only Lovers Left Alive: an ethereal tale of love and passion, which is going to last long in your mind. For a good long time!