Austrian auteur Michael Haneke’s Happy End (2017), screened at the 70th edition of Cannes Film Festival, generated huge expectations. That’s natural, considering how the directors’ last two sublime dramas – The White Ribbon (2009) & Amour (2012) – won well-deserved Palme d’Or. Hence it came up as a minor disappointment when Happy End finished its festival run without any major prize (the film-maker’s 2003 film Time of the Wolf faced similar fate). Happy End does feel a little under-powered, revisiting the well-trodden themes of existential malaise without much of the Austrian maestro’s core-shaking, flabbergasting intensity. It’s got to be the most scattered, branched-out tale since the auteur’s 2000 movie Code Unknown. Yet unlike that humanistic look at fractured urban life, this scathing observation of self-centered haute bourgeoisie French family doesn’t truly come together as a unique and cohesive work in Haneke’s oeuvre. Nevertheless, Happy End is entwined with sharply pointed and bitterly funny moments to definitely warrant a watch. 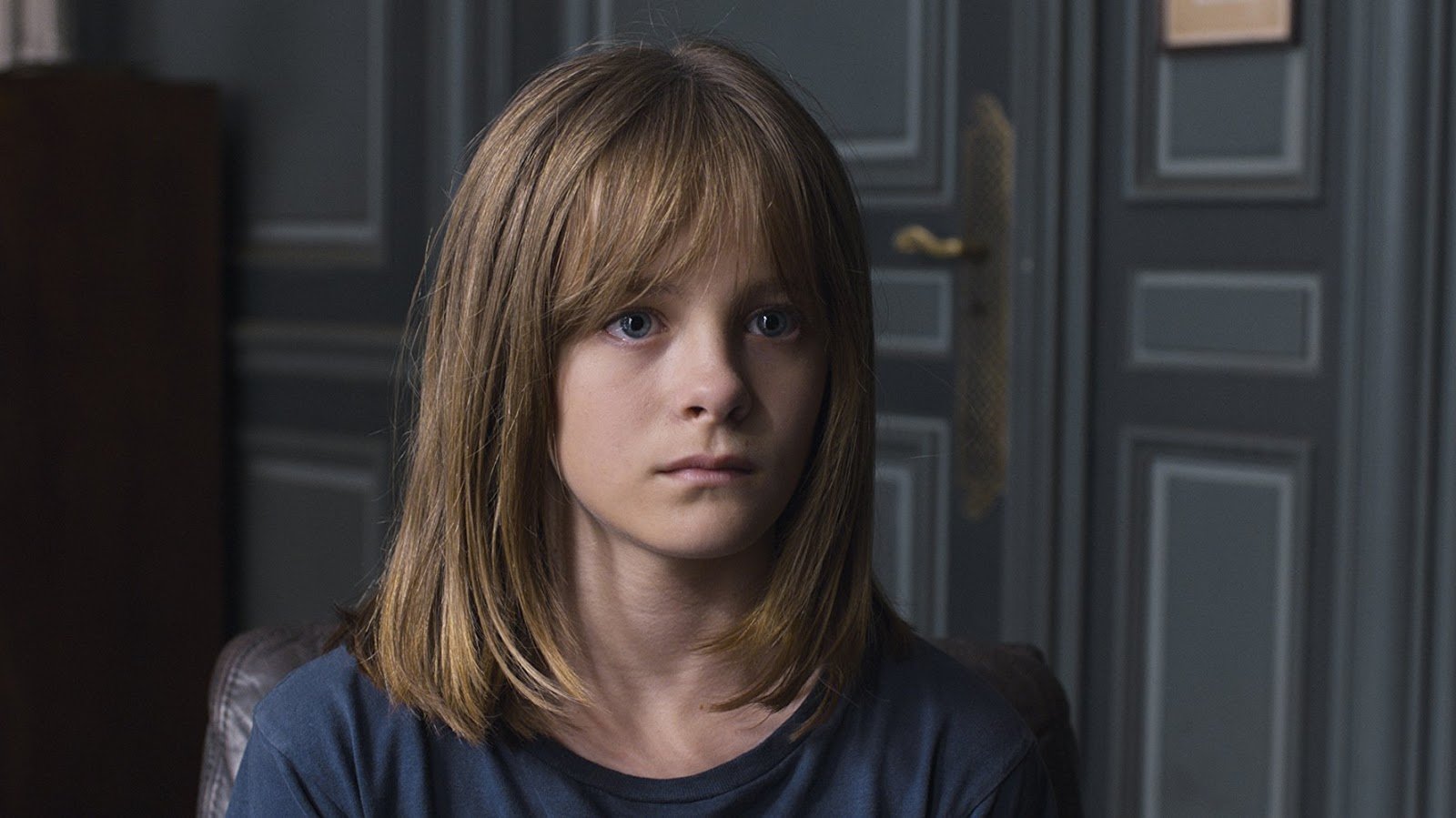 The way we communicate or often fail to happens to be one of Haneke’s pet themes. That preoccupation seems evident in the film’s interesting opening scenes: a distressed 13-year-old girl Eve (Fantine Harduin) films and simultaneously predicts her mother’s stolid routine at the toilette. The predatory framing of the smart-phone may come off as a shallow commentary in the hands of other film-makers. But Haneke’s precise voyeuristic recordings is accompanied with flashes of text that perfectly conveys the profound alienation and callousness of an adolescent, whose face, we only witness later, looks as deceptively placid as the chat windows. These live-streams turn a lot sinister as she films a hamster overdosing on her mom’s antidepressants and then repeats the same process on her mom itself. Mom’s hospitalization consequently sends the alleged ‘bad apple’ of the bourgeois family to live with her father Thomas (Mathieu Kassovitz) in his opulent family estate in Calais.

Despite the palatial nature of Eve’s new residence, the atmosphere of lovelessness perfectly matches the one she found at her mom’s home. Gradually, Haneke unfurls the other maladies plaguing the wealthy industrial family which couldn’t be just the result of the wrongful use of mobile apps. The disaffected individuals of the enigmatic family are presided over by an unhappy, suicidal 85-year-old patriarch Georges Laurent (Jean-Louis Trintignant). He is neither courteous nor smutty, and it’s been a long time since he handed over the reins of their large yet struggling construction empire to daughter Anne Laurent (Isabelle Huppert). The opening set of live-streams is immediately followed by an exquisite long shot of a serene construction site, which is abruptly thrown into chaos by a landslide that collapses a huge concrete wall.  This accident on the construction site triggers falls down in the relationship between Anne and her negligent, emotionally distant adult son Pierre (Franz Rogowski). Of course, this manner of hinting at the connection between the disoriented individuals of a family unit through strangely puzzling expository scenes pretty much aligns itself with enticingly sublime and cryptic tone of Haneke’s masterworks.

As expected, the literal crumbling of the walls sets the precedent to delineate the myriad of fissures surrounding the Laurents’ familial relationship. Thomas, the well-to-do surgeon, has remarried and is blessed with a beautiful baby boy. However, he carries on a torrid affair with a violinist, conveyed through a series of sexually graphic internet chat messages. Observing the family from circumference are household Moroccan servants, Jamila and Rachid, who are often treated with quiet condescension. As young Eve fully comprehends the dispirited, cold attitudes of the Laurent clan, her own darker inner world unobtrusively dilates. Haneke also tries to comment upon the lopsided nature of the broader world, which amounts to little more than the occasional burst of peculiar expositions.

From suggesting the child psychopathy of Benny’s Video or The White Ribbon to zeroing-in on sadomasochistic urges of The Piano Teacher to divulging the euthanasia theme of Amour to chronicling the bourgeois nightmare of Seven Continent or Hidden, and the racial discomfort of Code Unknown, Happy End largely recycles the auteur’s familiar themes and plotting techniques. Some of this well-known thematic grimness elevates the austere material. At the same time, these echoes of Haneke’s previous works don’t possess thoroughly-crafted payoffs to stop it entirely from becoming pastiche or self-parody. Although the film is described to be set against the ‘backdrop of the refugee crisis’, this particular subtext mostly falls flat. It is understandable that the morally bankrupt white family wouldn’t pay much attention to the racial minorities or poor immigrants, but that hardly bestows any relevant statement to be included in the plot-line (the director has previously made subtly strong statements on the issue of minorities and refugees in ‘Cache’ & ‘Code Unknown’). On the theme of class conflict, Haneke does pique our interest in the quietly confrontational yet not-so-well-rounded scene, when Thomas and Anne visits aggrieved servants’ little daughter who is bitten by the household’s angry dog. They boss the help with very subtle arrogance and regard their genuine concerns with the suspiciousness of border guards. 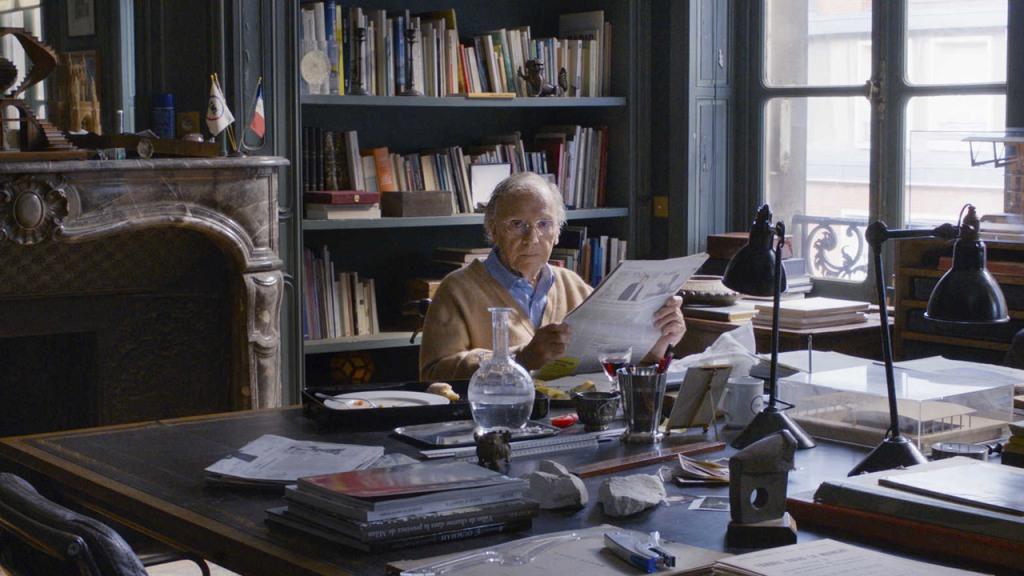 Performance wise, the film is incorporated with a solid cast, even though the character profiles lacks depth. Furthermore, Jean Louis Trintignant and Harduin’s steely presence easily overshadows the performance of Isabelle Huppert (that’s largely due to Anne’s dry characterization). Haneke’s directorial touches do shine a lot better while showcasing his well-tuned perspective of a surveilled, technologically integrated society. This leads to certain key long-shot sequences, including the part-frustrating & part-funny scene of wheelchair-bound Georges navigating through busy road and addressing a bunch of black kids in hoodies (maybe he is seeking their help to end his life). Eve’s empty gaze and reluctant ‘don’t knows’ clearly contrasts with the keenness she displays online. While most movies on dysfunctional families provide a window to understand the reasons for lack of parental love, unbridled self-absorption, Happy End simply holds us inside the bourgeois bubble without providing simple answers to the simmering violence and apathy lying beneath the calm facade.

Much more intriguing is the bizarre bond Eve forges later with grandfather Georges. What we expect is older generation passing wisdom to the younger. But their conversation is punctuated with darker secrets and stories of death and suffering. Haneke deftly slips into provocateur mode whenever he steers the narrative to be a treatise on smartphone-induced communication or social media. And, this theme reaches a full-circle as Eve once again starts recording from a distance, the incident that’s supposed to be the ‘happy end’. In conventional works, we might expect the estranged characters to eventually open their hearts and find some firm, common ground. However, since it is Haneke-ian world, we see Eve opening her mobile phone, possibly gliding towards the predestined, gloomy future. As the fan of director’s works, I definitely ‘enjoyed’ this morbidly nihilistic ending.

Happy End (107 minutes) isn’t radically different from anything Mr. Michael Haneke has done previously and doesn’t plumb new depths into the film-maker’s trademark vision of existentialism. That said, there is just about enough fascinating visual patterns and quality performances to provoke certain thoughtfulness.

The Tonal Difference between Peter Rabbit [2018] and Christopher Robin [2018]