Movies are often, predominantly, shot in two colors. Of course, other colors from the color palette of a movie are used, but the dominant and secondary color helps set the mood of the film. The dominant colur grabs the audience’s attention and the secondary color adds depth and is usually picked for contrast. Neeraj Ghaywan’s “Geeli Pucchi”, a short from the Netflix original movie Ajeeb Daastaans (2021) is no exception to this principle of filmmaking. The two colors extensively used in the movie are blue and orange. Blue and orange are the most used two colors in cinema history. Mainly, because they seem to replicate our real world with the most accuracy and people strongly associate it with opposing concepts – fire and ice, earth and sky, land and sea, dawn and dusk, good and evil. Once you start observing, you’ll notice this color combination everywhere in life.

Likewise, this color combination was the first thing that pops out while watching “Geeli Pucchi”. From the first scene itself, the power dynamics between the two characters are established just through the costumes and production design. Throughout the film, we see our two main characters, Bharti (Konkana Sen Sharma) and Priya (Aditi Rao Hydari), primarily dressed in blue and orange, respectively. For the meticulous attention paid to the colour palette by the makers, the decision of painting both the characters as morally Grey stands out as the most interesting colour choice taken. Being morally grey is where most of us stand and that is the most commendable layer, out of many, inspected in this movie.

Bharti Mandal, an ambitious, hardworking, B.Com graduate is a factory worker who also happens to be a queer and Dalit woman. She had applied to work in this factory as a data entry operator, but for some baseless reason, was given the job of a factory worker. The owner of the factory, a brahmin, tells Bharti that she does not know how to operate Tally and Excel and hence she can’t be given that position. Yet, when Priya Sharma, the daughter-in-law of a well-reputed brahmin family, joins, she’s not required to have excellence in these softwares because the owner believes it can be learned on the job.

Signs highlighting class and gender differences start emerging from the first few scenes itself (Priya is often seen coming down to the ‘lower’ section of the factory for lunch break, the owner’s office cabin is lit in orange while the rest of the factory in blue, the lack of women’s restrooms is only highlighted when Priya inquires about it, the blue-collar work done by the labourers, dressed in blue, happens ‘beneath’ the office from where the white-collar workers operate from). Yet, amidst all this hierarchical struggle, blossoms a sweet and tender love story between two queer women. Priya takes an instant liking to Bharti. They grab lunch together, go out for chaat, talk about their life with each other and soon start falling for each other. 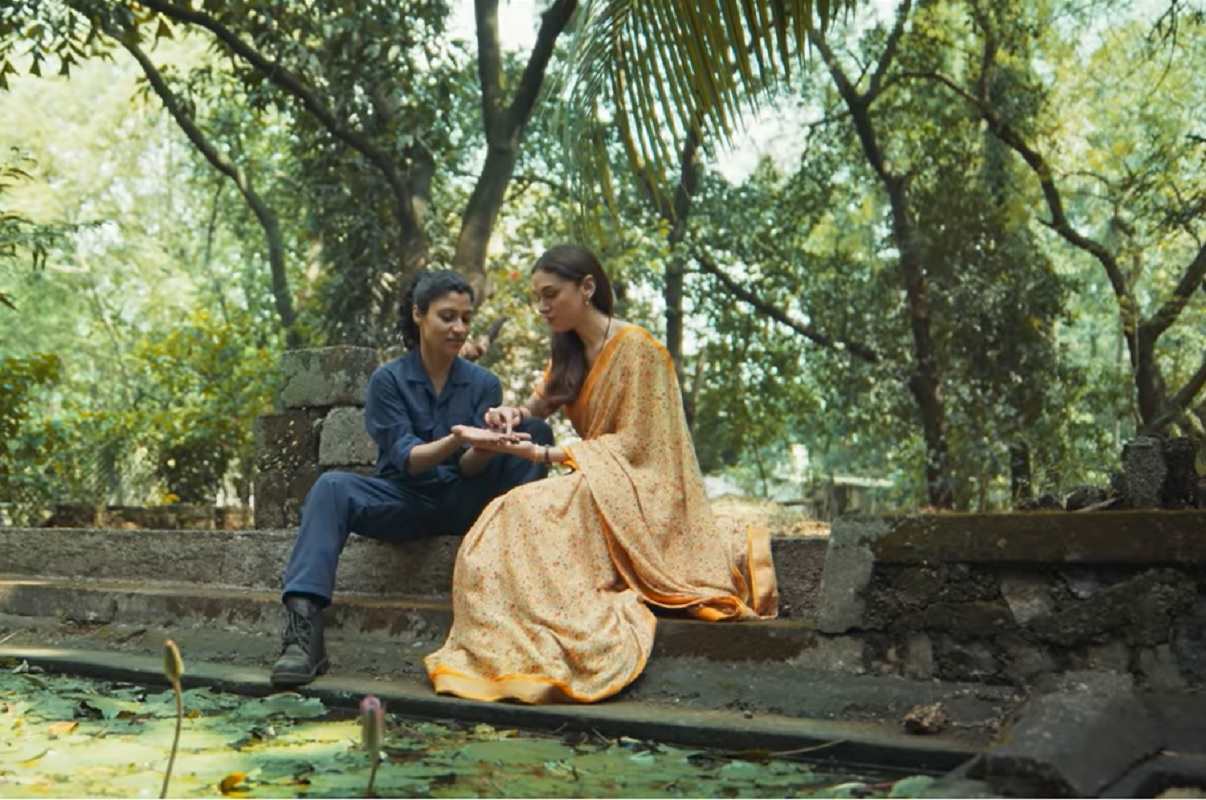 While Bharti has her struggles to deal with, life is not a bed of roses for Priya as well. On one hand, Bharti is lonely and on the other Priya doesn’t have space to breathe in her cramped up house. Priya’s life is controlled by her duties and responsibilities towards her husband and family. From being denied to walk alone to work, to having sex in the washroom in the middle of the night because her husband said so. There’s hardly any area in her life where she can claim authority.

One of the best inspections of this movie is shown in how our society identifies what qualifies as a ‘real woman’. A ‘real woman’ is given respect only when she fits the description of being a ‘Maa, Beti, Bahu, Biwi, Behan aur Bhabhi’. Whenever a woman tries to dress up differently, talk differently, chooses unconventional romantic partners or tries to do something with her life other than the societal norm, then the artificial veil of chivalry and respect suddenly flutters away.

When Bharti reveals to Priya her real name, Bharti Mandal instead of Bharti Banerjee, a Dalit, Priya quickly holds herself back. Her hands quickly draw away and for the rest of the movie, Priya constantly restrains her hands from Bharti who becomes an ‘untouchable’. The succeeding scene is brilliantly shot. Priya is called into the owner’s cabin where he and some other men are celebrating Priya’s birthday by cutting a cake. Bharti watches from the outside, people born into upper castes celebrating one of their own while she’s denied entry into this world even by her lover. The ‘outsider’ is finally called in, she forces a smile, enters, a part of her still believes that she’ll be treated with dignity in front of Priya and others. Just then, the owner tells her “yeh cake kaat ke sab main baat do”. These words are a sharp reminder to her and her place in this society which still wholeheartedly believes in the teachings of “Manusmriti”. The scene is also a good metaphor for the remainder of the story. Bharti was only allowed inside the room when and only when she was ‘working’ (cutting and distributing the cake). Similarly, the only way she can get herself out of this rut of oppression is by working alongside the real people in power while never coming across as a threat to them. And this is exactly what she does.

Similar Read to Ajeeb Daastaans (2021): 25 Great Feminist Films That You Should Watch

Bharti reinstates the age-old belief in Priya that the only way she can form an identity of her own is by becoming a mother. She manipulates her into becoming a mother as soon as possible. She lends her empty apartment so that Priya and her husband can conceive peacefully. While being away from work, Priya teaches and hands over her work from time to time to Bharti, who, being conscientious, learns quickly. Soon, Priya is expecting. When she’s due in three months, she goes to the owner’s office and requests a four-month leave while offering Bharti, a trained substitute by now, as a temporary replacement.

The climax of the movie happens on tea when Bharti visits Priya’s house. Priya’s mother-in-law serves tea to herself, Priya, Priya’s husband and Bharti. However, out of all ceramic teacups, Bharti’s teacup is made of steel. A shot inspired from Ghaywan’s another subliminal short, “Juice”. The last frame of the film is so powerful because she sips tea from the steel cup, not with any hesitation or shame, but rather with immense confidence in her abilities and intellect. After all, it’s her intellect that has taken her this far while others are busy playing the status game. 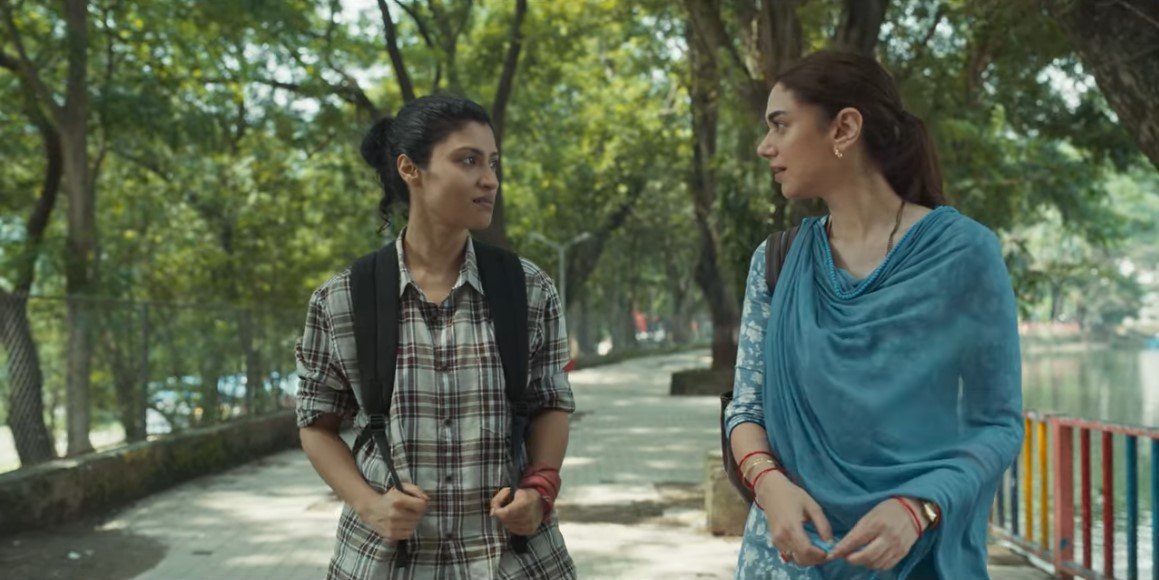 When Bharti convinces Priya’s family that she shouldn’t return to work so soon and rather focus on the baby, a look is shared between the two. The look hints that both know what Bharti did and Priya’s stealing gaze hints that she finds herself guilty of not correcting her prejudices and gradually becoming a prisoner of the very privilege she latches onto so dearly. Like most mothers, Priya also silently resigns her freedom, life and ambitions to look after her child. And Bharti, who sees through the fabrication and deceit of these devious games which society plays on so many of us, is truly free and hence, is finally offered the job to continue as a full-time data entry operator.

Aditi Rao Hydari’s portrayal of the Manic Pixie Dream Girl is utterly believable and somewhat better when looked upon from the female gaze rather than the omnipresent, male gaze. Konkana Sen Sharma is brilliant in her restrained portrayal of a woman denied love. She develops an exterior front who walks, talks and acts like a man only to protect herself from the ever-present scrutiny of not fitting into the box of being a real woman.

Also, Read: Everything Coming to Netflix in June 2021

It’s a beautifully written film with layers upon layers of subtext. When Priya tells Bharti the boss has told her not to go down [to the factory floor] because it smells, she doesn’t realise the impact or offensiveness of what she is saying. Just the next line however displays the lack of agency women have when Priya says “Hamari apni choti si duniya hogi, apna kona, jahan koi mard nahi allowed hoga.” and Bharti innocently responds “sab to hai yahan pe” (referring to the men surrounding Priya’s small cubicle). It’s hard not to sympathize with both the characters. We feel the satisfaction of Bharti getting what she deserves with a pinch of salt as we know another woman is forced to ‘adjust’ and join the unpaid labor force of being a caretaker.

The pride flag (rainbow flag) is a symbol of immense pride and joy taken by LGBT people, who for the longest have had to live in the closet. Neeraj Ghaywan understands this and treats the subject with the respect and integrity it deserves in “Geeli Pucchi” from Ajeeb Daastaans (2021). And yet, Ghaywan doesn’t ask us to forgive his characters or even understand them completely. He simply shows, with complexity, the missing color from the flag, yet found within us all, grey.