More than halfway into the film, in a single continuous shot positioned from the car’s bonnet, the husband and wife keep stealing furtive peeks at each other, each swiftly looking away when the other tries to meet the glance. Unease stews between them, climbs steeply into hostility, and erupts in an ungainly meld of long-repressed emotional finality and exhausted articulation. The scene’s staging is interesting, but the screenplay is resolutely limp, in terms of psychological dissections and character development, that the viewer is never given adequately layered material to expand on his/her/their understanding of the many interpersonal and social dilemmas that abound in the narrative. Indrasis Acharya’s third directorial feature, The Parcel, continually toggles between the private and public spheres of responsibility, but the transposition is handled so awkwardly and the approach so ham-fisted, nothing registers wholly.

Nandini and Shouvik lead a somewhat well-settled life in Kolkata, with their daughter Shaji who’s in junior school. They have a lovely well-furnished apartment; Shouvik never fails to celebrate his wife’s birthday with childlike glee. However, there are ever-present fractures both in the relationship and their public life, that bubble to the surface with steadily multiplying degrees. Shouvik has been having an extramarital affair; we never see the woman involved but hear her insistent voice over the phone calls with Shouvik. Nandini isn’t really a stranger or naive to her husband’s discreet calls. He feigns it’s his medical vocation’s duty calls. We sense the unnerving realization that Nandini perfectly knows what’s going on but refuses to face up to and acknowledge the inherently thorny situation.

The setup gets designed as too peachy keen. The MacGuffin is the flurry of parcels from an unknown sender, putting into motion a chain of events where the past intervenes in and perturbs the present. The first one arrives on Nandini’s birthday evening. The surprise gifts keep coming over the following weeks, comprising an assortment of photo albums and framed pictures of Nandini, some captured during the college days, some as recent as her closely tracked activities that day. 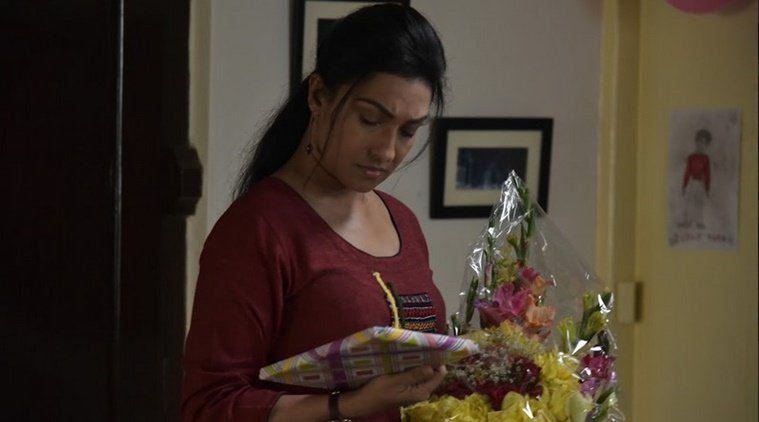 The horror of being intimately surveyed and watched by some unknown entity isn’t capitalized on to great dramatic effect. Acharya isn’t interested so. He contrives that as the conduit to navigate concerns of the supposed negligence in the health sector, the steep costs that, entire echelons of the population being stripped of any access to sound medical infrastructure, the nexus between police and doctors, the sheer unmindfulness of upper-middle-class privilege and what that engenders in the smallest of daily circumstance, the resultant sense of ownership.

The narrative ripples with many more undercurrents. Nandini is battered by several scars from her past and the consequences of those hover intermittently in her decisions and attitudes to crises that are hurled her way.  Acharya opts for a gradual revealing of information from the past, yet in a very half-held manner. Nandini is on temporary leave from her medical practice, and the pull of motherhood compels her never to try other options in the ambit of her career. We are apprised of her history in miscellaneous nuggets through scattered, digressive encounters with a host of characters who pop up every now and then. There’s a mention of an accident, an affair conducted a long time back, and blame attributed to her for a former patient’s death, the lattermost being conveyed to us with the most considerable detail over the course of the film.

All these facets come to fray the relationship between Nandini and Shouvik, in ways that aren’t necessarily always spelled out. We are shown a marriage past significant damage, but not completely irredeemable or unsalvageable. The twin stasis in communication and exchange of mutual conciliation accrue together to shut the door on more healthy dialogue towards true happiness. This relationship, utterly stultified in more inner un-stressed ways, is what Acharya is keen on exploring and he tethers it as the very center of the film. In a memorable moment, when Shouvik teases Nandini about a possible secret admirer who’s sending her these gifts, Acharya abruptly laces the scene with pitch-black humor and a surprising streak of absurdity. The bursts of laughter carry deeply lodged hurt and slivers of unarticulated suspicion within.

The ramifications exert a cumulative force of bottled-up grief and buried trauma, which Acharya visibly struggles to incorporate into the narrative through a panoply of perspectives addressed by diverse peripheral characters. The primary contemplation is on how the past plays into the present, the inexorable nature of our actions, and how that circumscribes the immediate shape of the here and now. Acharya circles around closure and moot business and zooms in on the contention between the two. Most of the characters in the film are products of unresolved past predicaments. For both Nandini and Shouvik, past moments of truth weigh and hang long and hard over each newly cropping up dilemma. 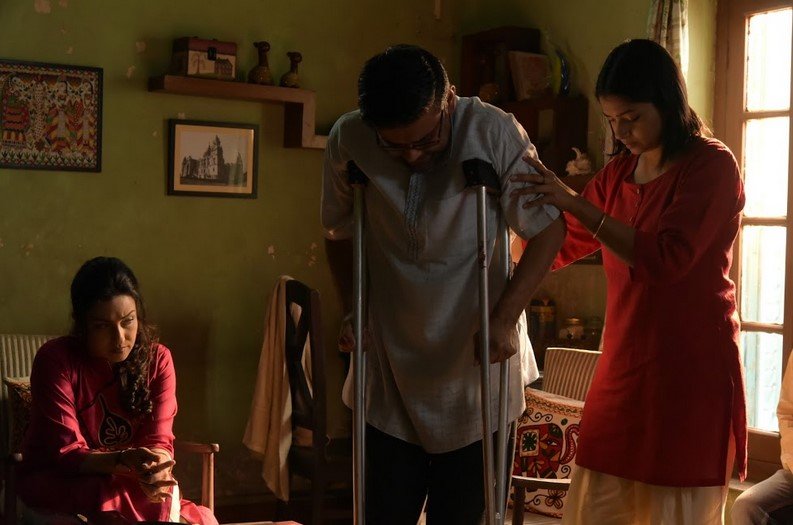 Both have been burnt by and are constantly caught in the crossfire between medical board authorities and public wrath. Through the principal characters, Acharya launches fusillade against harebrained trigger happy mob violence, and reckless vigilante squads who exhibit themselves as possessing more medical understanding and intuition than actual doctors.

The thematic ambition is immense, but neither the dialogues nor the screenplay’s textures are able to utilize and tap the tensions in the relationships. It becomes too inept at locating the very psychological richness it ostensibly aspires for, from the get-go. Acharya favors ambiguity and spare dispensation of information in narration, but that’s not sufficient to warrant admiration; the script sorely lacks any bite. The writing is too broad, too facile in its critique, and has none of the sharp probing quality required to duly assessing the cracks in the marriage or the languishing and skewed structures of the health sector.

Sample the scenes that display the public anger and helplessness. They are staged amateurishly, with paper-thin representations of agitated mobs just tearing into the clinics. The score starts booming, cueing panic and distress. Or, when a less privileged relative of Nandini is hospitalized in a decidedly non-urban setting, we get one of those standard-issue quibbles from a character about backhanded transactions done for securing a bed, and that seems to surprise Nandini. Are we expected to buy her surprise?  She might have been practicing in affluent urban spaces, but even a layman would be cognisant of the anxiety around bed procuring. This is a textbook example of ridiculously ignorant, wet-behind-the-ears writing.

Acharya inserts a subplot involving Nandini’s childhood friend Arundhati (Daminee Benny Basu), and her invalid husband. Issues are lobbed here. Does the invalid who’s utterly dependent on a caretaker (the wife in this case) have any right to complain against the latter regarding anything whatsoever? An idea worth pondering on is marred by the handling of the said character, which’s designed as more of an issue-communicator than having any character depth. He is on the receiving end of a frankly ridiculous, half-baked arc culmination which only serves to further deeply unhealthy notions around a community. More than being shocked by how Acharya chooses to build his character, I was repelled by the need for such a choice of eventuality. It barely adds anything other than a very clear underlined emotion and an elemental frustration. We also get a very daftly done dream sequence.

Such vapid writing is aggravated by slipshod direction. Santanu Dey’s camerawork is full of rank mediocrity, with lighting in many scenes off-putting me doubly and Moloy Laha’s edit flails and toils to make sense of an assemblage of patently dull scenes. Acharya over-relies on Joy Sarkar’s otherwise distinctive music; however, there is just a surfeit of it spattered across too frequent but unimaginatively rendered violin classes that Shaji attends. There is also a superbly lush solo violin by Israeli musician Akram Abdulfattah that bookends the film. 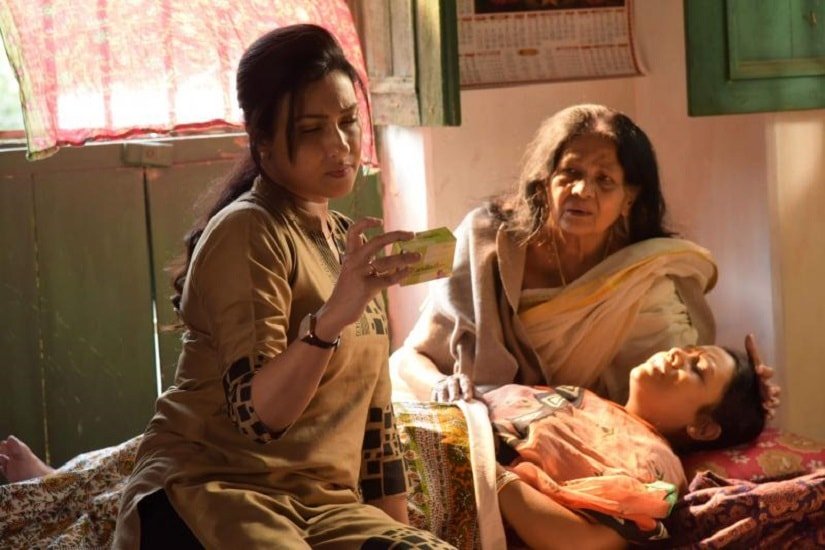 The inner opacity of Nandini is offset by Rituparna Sengupta’s flagrantly ill-conceived performance. Nandini is our guide to the predominating inquiries into the dimensions of guilt that courses thick and subterranean through the film. She had been at the center of a vitiated media trial much earlier than the events in the narrative, levied with the brunt of severe accusations of negligence, though she believed in her entire innocence. Her guilt stems from the affair and the accident, both of which had been cursorily swept under the carpet. The inadequacy of uncertain fraught hastily terminated episodes haunts her. She is a character with enormous internal baggage. How does a woman, with once a rudely interrupted flourishing career, actually wrestle with the challenges of motherhood and more importantly, the complete turnaround from a full-scale professional to domestic life?

Naturally, The Parcel required an exceptionally intelligent performer, astute enough to parse the compounded layers and convolutions that Nandini’s character is beset with. Rituparna Sengupta isn’t that performer. Her performance is utterly shorn of any intense, specific deep dives and exposes a shallow engagement with character. What we get is a startlingly superficial, lazy interpretation, achieved in external strokes of weathered look and mien. The inner bruises are not delved into, even fleetingly. The interiority is missing. Sengupta mostly raises her voice for impact but her face stays impassive, the tiniest of flickering emotion reflecting on her features in a rather disinterested manner. Her insipid style comes into glaring focus, especially in her scenes with the impeccable Daminee Benny Basu, who, with an infrequent bare fifteen-minute screen time, creates a sharper, nuanced impression. Basu imbues even mundane acts like washing hands after coming home from work with the swell of tragic desperation. She alternates fluently between summoning this extraordinary scene-chewing volcanic vigorous fury and wordless, piercing, and soul-penetrating long steadfast gaze.

In a standout scene (only due to her acting), she slides from genuine cluelessness to magnificently destructive rage to hollowed-out grief, with incredulous agility. In scenes with her, Sengupta wanes to the almost painfully unwatchable point, her cloddish voice modulation and each stray expression coming off as an embarrassing showcase of an actor’s absolute unpreparedness. It is necessary to elaborate at length on Sengupta’s fundamentally misjudged performance because Nandini is the connective tissue of many lateral strands and any actor playing her is supposed to anchor them strongly, cohesively together. Her performance instead enfeebles the film even more so.

Saswata Chatterjee fares better but he can’t rise above such patently unremarkable writing that he is saddled with. The kid, who is supposed to be such a strong binding presence, is given short shrift. Sreela Majumdar is wasted in a role that is bewilderingly slight especially considering her talent; she gets a brief scene to elicit emotions but has been given with so little it evokes nothing in the viewer.

The filmmaking vision and vocabulary is so wanting in flashes of insight hardly anything coalesces.  Acharya obviously fashions The Parcel as a slow burn, but the very voice is too lackluster and has little perceptiveness to keep it pulsating in its own muted ways. It quickly dies out before we even get to the thrust of it and never recovers.

The Parcel is streaming at the New York Indian Film Festival held virtually on Moviesaints till June 13.