Quite reminiscent to Derek Cianfrance's "Blue Valentine", this film explores why people who deeply & truly love each other, face the loss of understanding that brought them together in the first place. Yes, there's a social subtext about what goes around medical units that don't comply humanistic approvals, but Khlebnikov's complete focus remains on the half-dead heart that Oleg & Katya share with each other.

Taking place in contemporary Russia, director Boris Khlebnikov’s latest film might sound like a medical thriller from it abnormally beating title. But at its core is a marriage in crises which is only boosted by the lack of self-awareness & the inability to emote emotions to the one person who needs to understand and feel them in the same space.

Oleg (Alexander Yatsenko) is no miracle worker. However, when it comes to giving his full attention towards a patient that needs instant medical care, the paramedic goes to every limit to make them feel safe. Sadly, the same can’t be said about his personal life that mostly surrounds his life partner Katya. A junior doctor by profession, Katya is fed up with Oleg’s lack of sensitivity & understanding. She even comments that it feels like he has a universe of her own. His constant lack of personal awareness & care has led Katya into a state of complete mental decline.

The marriage seems to be crumbling while Oleg’s paramedic team faces a change in authority. His previous boss used to understand, and even cover up for Oleg’s small mishaps (mostly because of his excessive drinking problem) just because he knew that he is pretty good at his job. Even when the old lady who was prescribed rubber pills for the constant nagging attitude complaints to the authority, Oleg is left unharmed. However, the new boss in command wishes everyone to go by the book. We get to see Oleg’s sensitive side as we see him declining deadlines & transitioning calls while attending a patient at the risk of losing his job. The downside is, he is not sensitive enough to the one person that needs his attention.

Where does the real problem lie? Is it the high-end stress job that both the husband & wife have gotten into? Is it Oleg’s drinking? Is it Katya’s lack of hold on him? Is it the failure to treat oneself when you are out saving everyone else? Is it just a lack of common ground or a word or two of sensitivity? Or everything combined into one? Khlebnikov uses Oleg’s self-harming attitude to investigate a steady decline in life – both in his personal & professional ones. Katya, on the other hand, is completely knocked out of her life. On one hand, she has to deal with her tiresome hospital shifts, on the other hand, she has a boozing man-child whose failure to see through is getting her on the verge of total insanity. 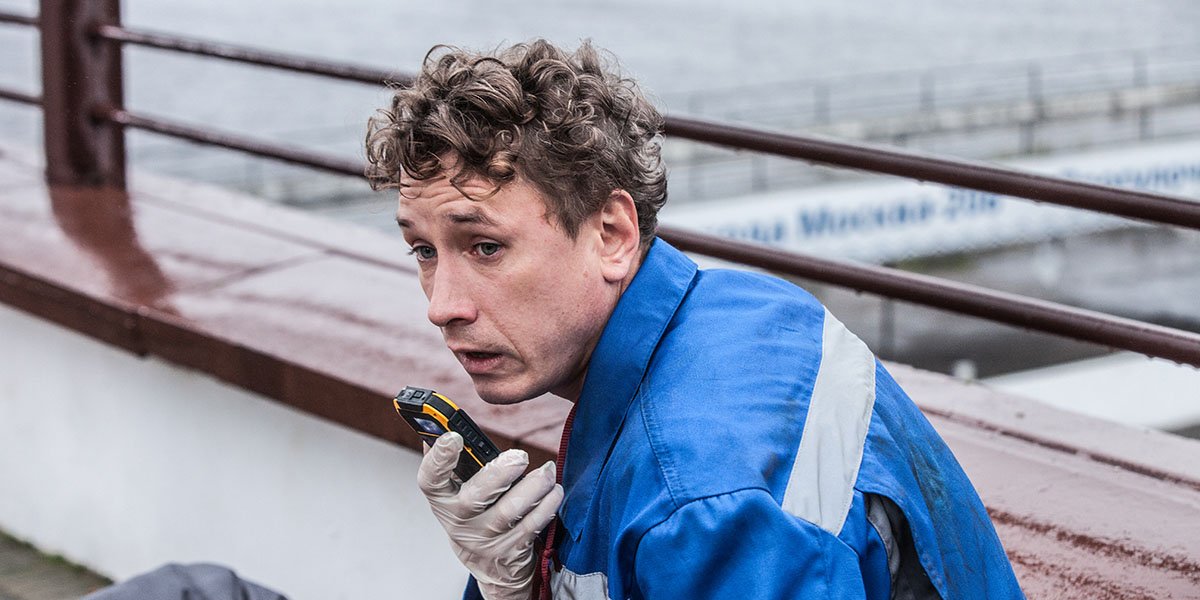 In one of my favorite scene from the film, Katya is seen lashing out in anger while the couple drives to their work. She is so mad that she leaves her car in the middle of the road and runs out in a random direction. Khlebnikov cleverly puts in another running sequence to beautifully merge you into the lives of these two people who save other people but fail to save themselves. Quite reminiscent to Derek Cianfrance’s “Blue Valentine“, this film explores why people who deeply & truly love each other, face the loss of understanding that brought them together in the first place.

Yes, there’s a social subtext about what goes around medical units that don’t comply humanistic approvals, but Khlebnikov’s complete focus remains on the half-dead heart that Oleg & Katya share with each other. The kind of authenticity that he brings to the screen with his careful picks of vignettes gives an immersive experience of heartbreak and vulnerability. We, along with Oleg & Katya are unable to decide how to fix what’s broken between these two people.

Irina Gorbacheva plays Katya with the kind of sensibility that’s rarely seen in dramas about broken relationships. In a kind of role-reversal, she is put as the central piece of a marriage on a downward spiral. She tries to find that part of Oleg that shows sensitivity and love. Something that they have lost in the midst of a life that has become a sleepless circus. There are times when Khlebonikov’s film threatens to become repetitive & files in too many tense scenes for the sake of following a melodramatic narrative arc but Alexandre Yatsenko’s dedicated and supremely authentic performance puts the film right back on track. In the pleading light of medical help & self-realizations, his performance becomes an essential cure for this ‘Arrhythmia.‘