Falling Down [1993]: The Contemporary American Downfall 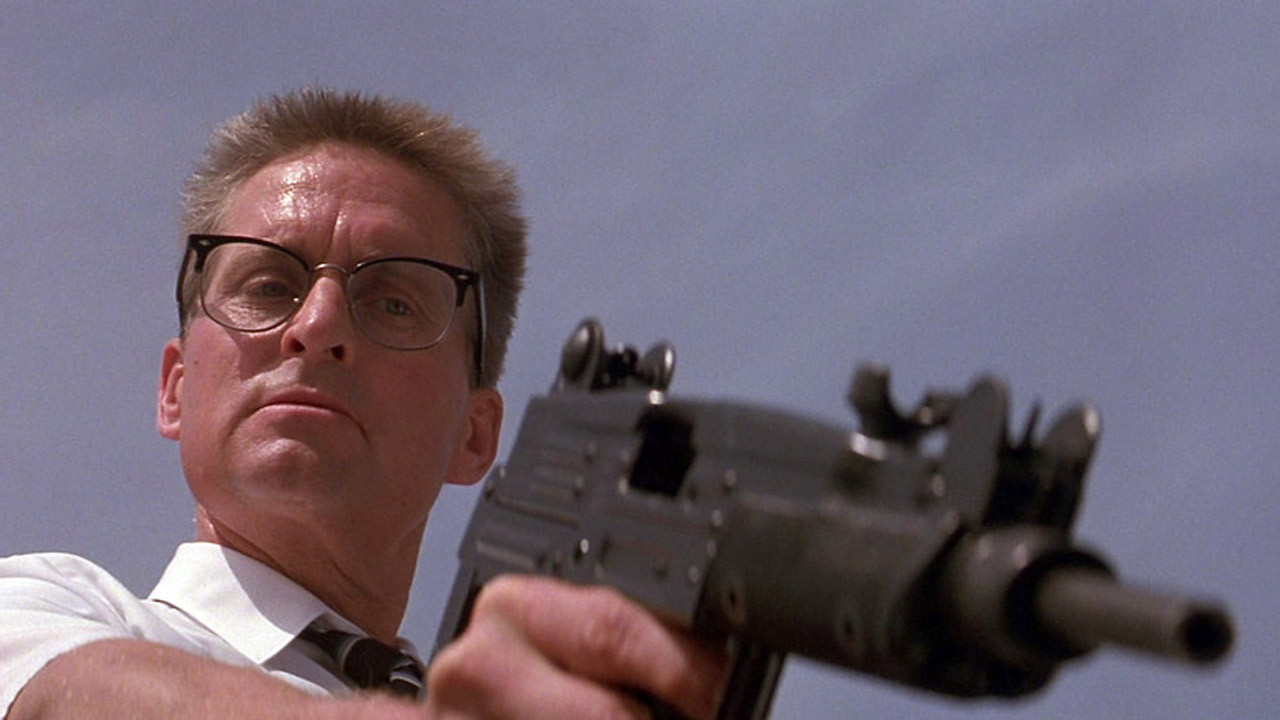 There’s a lot of frustration in Falling Down. Folks are denied loans, they’re being made redundant, they’re over educated and under skilled, they’re being overcharged for a can of Coke, and they’re stuck in traffic. The anti-hero here, Will (more commonly referred to by his license plate D-FENS, played by Michael Douglas), states the cause of his own falling down – “gravity”. It seems the cosmic design of all things is what has caused Will’s deterministic downfall. “I did everything right,” he exclaims at the end of the film as he faces his gloomy fate – this isn’t entirely true, but he was already in a bad state, to begin with and society met him half-way in turning him into a morally dubious criminal.

The film takes place over the course of one day and features Will, apparently driving to work with his briefcase and tie, who is stuck in traffic on his way and decides just after the opening credits to get out of his car and walk, claiming that he’s “going home”. Will’s real intentions are gradually revealed throughout the film and the home he is referring to is the home of his estranged ex-wife and young daughter (where he is going for his daughter’s birthday). Will is certainly not the first person to feel the need to just abandon their car in the midst of heavy traffic, though not many people will venture “home” through the roughest and most dangerous areas of Los Angeles, and the injustices Will faces along the way (whether petty or largely troubling) further contribute to his falling down.

As his license-plate pseudonym suggests, his job was in national defense, but he lost it after the end of the Soviet war caused a recession in that workforce. He had a wife and kid, but they left him and put up a restraining order because he appeared to have an abusive temper, though an apparently non-physical one. Lack of vacation and lack of family structure are certainly the two main reasons causing Will’s downfall and are what mainly support’s Falling Down’s emblematic portrayal of the certain brand of frustration felt in America during the early ’90s. Wealth disparity was obliterating the middle class as the poor got poorer and the rich got richer, especially those working in defense like Will, who felt their redundancy was a stab in the back from the country they helped defend. Divorce rates were also at a high during this time, just before they began their decline closer to the 21st century, with the number of divorced dads denied child custody exceeding the number of divorced dads who were physically abusive.

As Will progresses further and further through all that he hates in his society, he turns his victimization into villainy. His depression seems to be justification for his unorthodox actions, which can be either to get his way (producing a gun in the fast-food restaurant so he can order off the breakfast menu) or simply to make a grand statement (shooting up a phone-booth so an irate man can’t use it). His existence in the tricky grey area between victim and villain becomes murkier as the film goes on, showing a man whose vented frustrations at an unfair world have not been managed in a peaceful manner, though this illuminates the often untold back-story of how flawed men become villains. “I’m the bad guy?!” he says in pained astonishment at the end – we may not sympathize with him a whole lot, but we can put our empathy into him.

After his violent encounter with a convenience store clerk, detective Prendergast (Robert Duvall) becomes hot on Will’s heels as he continues his misguided vigilantism across the city. This character may sound like a cliché or two, as he is not only a robbery sergeant and on his last day before retirement, but is also something of an example set up for Will. Both characters are in varying similar situations in their lives – Will is separated from his young daughter, but Prendergast’s has tragically died; Will is separated from his wife, whilst Prendergast’s relationship with his own wife seems strained, yet manageable; Will has been made redundant, Prendergast is retiring wilfully, though isn’t respected by his superiors; and both are victim to the general everyday malaise of modern consumer culture. Both characters are obvious counterparts, but both have varied life events to shape their motivations and reactions, with evidently Will feeling more of the brunt of the cruel world. Prendergast does try comparing himself to Will, putting themselves in the same category as a way for Prendergast to prove an example that he can escape from the fall and bring himself back up like Prendergast did after losing his daughter. But there does seem to be one key symbolic item Prendergast has that Will doesn’t – Prendergast uses a musical snowglobe (playing London Bridge is Falling Down, of course) to his wife over the phone to calm her, then later we see Will buying an identical snow globe as a gift for his daughter’s birthday. Unfortunately, just before Will’s penultimate “falling down” stage, his snow-globe is destroyed. It is this item, and all its symbolic and melancholic connotations with childlike innocence and the family structure, that is present in Prendergast’s life, but not Will’s, and it’s likely this one small aspect of Will’s life might’ve saved him from falling down completely.

There’s admittedly not much depth to this film as all the messages and themes are laying fat and shiny on the surface – the aforementioned stress of modern day living that seem so unfair can break a person and even allure them into criminal behavior for no other reason other than to make a grand statement. Falling Down is an unpretentious film that has unashamedly been produced for cathartic reasons, a way for its creators and viewers to vent their own modern-day frustrations. The film received a share of allegations of racism and most definitely would’ve received more if it had been released today, but this film transcends identity politics as it is trying to empathize with a universal feeling. This is evidenced when Will spots a man in what looks like a similar situation to him, angrily complaining and voicing his discontent about being disregarded for his monetary status (what he calls being “not economically viable”) – this man’s clothes are the same as Will’s, but his skin colour isn’t. The mindset Will finds himself in can occur to anyone regardless of race, religion, gender, sexual orientation, and even class. This sort of mindset isn’t as specific to a demographic as some may think and that’s what makes Falling Down a most important and universal film for anyone who’s ever been even slightly bothered by the world in their life.

Take me to the River[2016] : Horror Personified

Falling Down [1993]: The Contemporary American Downfall