We all seem to know about Tina Turner – queen of rock n’ roll, singer, songwriter, dancer of the ’70s, ’80s, and even ’90s songs that reverberate even to this day. When she danced, every part of her body erupted with fiery, sensuous energy akin to none. She was all out – her volcanic energy transmitted to her audiences with such force and effect that you were bound to move along with her. Her songs told her story – most famously “What’s Love Got To Do With It.” Yet, directors Dan Lindsay and T.J. Martin ask us, do we really know her story?

Tina, which premiered at the Berlin International Film Festival, takes an uplifting look at the five-decade-old career and reveals layers of intimate details about the abuse, loss of identity, and the eventual recovery of a trailblazing woman. Her story is the stuff of legend, but particularly in this #MeToo era, is as important as ever. Balancing the wealth of archival footage that ranges from her early photographs to clips from her electric performances, it constantly reverts back to Tina in her Zurich residence recounting those days with a strategic sense of distance. Oprah Winfrey, her longtime friend, and Angela Bassett- who played her in the 1993 feature film What’s Love Got To Do With It make appearances.

Similar to Tina – The Girl and the Spider [2021]: ‘Berlinale’ Review – A powerfully choreographed exploration of alienation

When she opened up about the years of abuse she suffered in the hands of her controlling husband and fellow artist Ike Turner for the People magazine profile by then-music editor Carl Arrington, in many ways it broke as well as recreated a perception of her in the media as a victim of abuse. The hope that she would get past this phase vanished when she had to revisit this trauma time and again in public interviews, as her name itself, suitably crawled back to her husband. Tina only wanted her name back- to reclaim her identity first.

The film charts the creation of this identity in five chapters, which begins with “Ike and Tina”. Tina was originally Annie May Bullock: a determined yet shy 17-year-old who was the last person to think of herself as pretty. There was trauma and abuse even before Ike came into her life, as she had been that girl from the cotton-fields, where both their parents farmed, and back home where they fought almost incessantly. Abandoned shortly after, she found her voice in Ike’s band and started singing with them from 1957. A romance bloomed shortly after and in Ike’s supervision, she changed her name to Tina Turner. 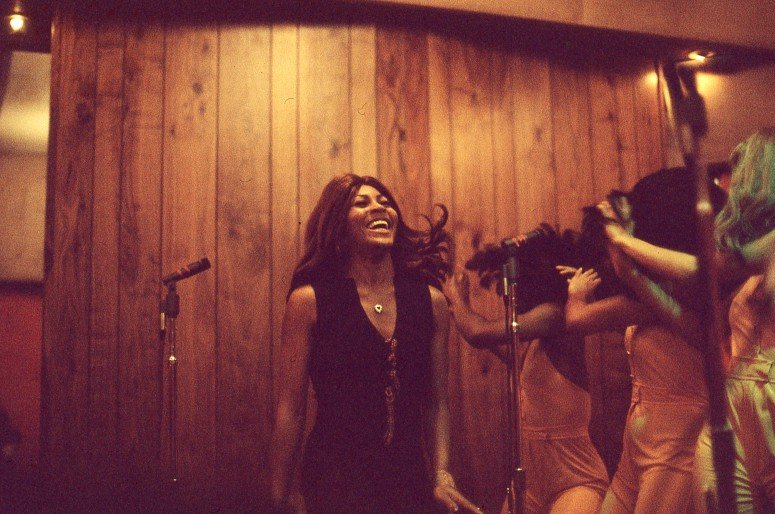 When Tina does recount the moments of abuse, it remains genuinely horrifying. Ike would beat her with shoe straps, clip hangers and have sex with her (even when she was pregnant with her first child) and then force her to perform onstage. In one day, she performed in as many as four shows- to packed audiences. She delivered each time, afraid and ashamed, trapped and trying to adjust. Ike’s reaction to her subsequent suicide attempts is jaw-dropping: for him, she did that because she was seeking attention, and desperately wanted to be like him. Retold with strategic tracking shots of empty rooms resembling her former household, these accounts hold raw, terrifying force.

Never tethering to the image of a victim, Tina’s journey from hereon – claiming her identity and blooming as a solo performer in full control of her artistry, is a story that reverberates beyond a reasonable period. Her acknowledgment that her introduction to Buddhism saved her life in many ways is stirring but neatly covered up. Aided with manager Roger Davies, the resurgence of her career with the massive Grammy-winning “What’s Love Got To Do With It.” takes up most of the latter half of Tina. Her realization that the public memory still lingers on her past with Ike, even after her relationship to Erwin Bach at once feels hurriedly done. In doing so, the documentary evokes an agonizing sense of sentimentality, and rarely takes that thematic leap into examining the horrors of positioning as a Black female artist in absolute control of her body and voice.

As extraordinary and life-affirming Tina’s life is, her documentary never achieves that sense of riveting. Listening and watching her retell her story is fascinating, but it also strategically side steps over her physical illness and intestinal cancer. We never see her relationship with Bach bloom; how he literally saved her life by donating his kidney when she had a kidney failure and needed a transplant. The 2018 suicide of one of her sons, Craig Turner, to whom the documentary is dedicated, is never mentioned, but the lasting wounds of past trauma are felt nevertheless.
“I had an abusive life,” she says near the end of the film. “That’s the truth. There’s no other way to tell the story.”

Tina is leveled as a survival story, of a woman who claimed her own identity in the public- one that needs to be told again and again. That’s the power of myth-making, one that nearly shadowed her identity. Even though Tina feels like a cap on the other representations of her life, most recently the well-received Broadway show “Tina: The Tina Turner Musical,” written by Katori Hall, her’s is a story that will stay for ages to come.