Set in the remote land of Galapagos, we meet the flummels- little doughnut-shaped species of animal inhabiting in the 19th century. Even as one is getting used to their fluffy shape, the humour- a lot of it hole-related, begins. There’s not much to be said about that, except it sounds plain weird. Nevertheless, Extinct earns its title soon enough, as two troublesome siblings Op (Rachel Bloom) and Ed (Adam Devine) find themselves transported to present-day Shanghai by a magical flower and learn that they are basically extinct. The revelation causes them to time travel, and meet other extinct species and then locate Charles Darwin!

Although the time-travelling aspect might prove to be confusing to kids, Extinct does not even try to make the most of it work. With glaring plot holes clearly visible in the second half, when the plot loses track of itself in the chase. Directed by David Silverman (who created The Simpsons) and Raymond S. Persi, the story seems unnecessarily convoluted at places, even though the colours and visuals pop up just right. Most of the characters also feel lazily written- even though there are historical and mythological characters in the mix (the Cyclops character is a good touch, but could have been so much more). 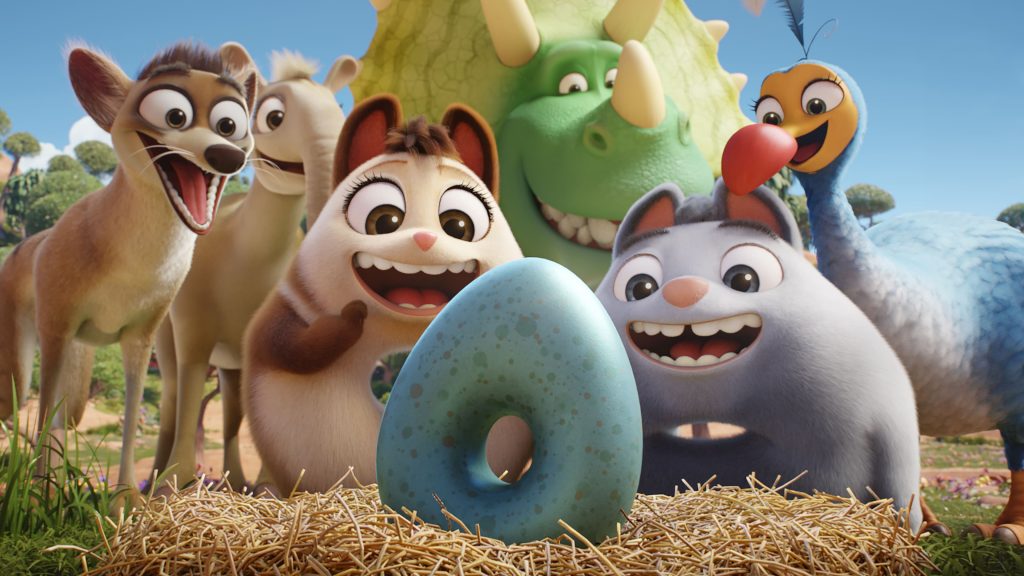 Op and Ed (Why that name? Noone knows why.) are notoriously known for landing in mischief and are banned from the local flower festival, and in order to please the rest, they pick more flowers. It is in this search that they stumble across this magical flower that transports both of them to Shanghai, where they befriend a fluffy little dog (Ken Jeong). He is the pet of the Chinese professor who is busy researching history through time travel and has built this system where he can go back to various parts of the world to witness extraordinary discoveries himself. But he has gone missing now, and the reasons will follow, which would lead both Op and Ed to realize not to trust anyone so quickly.

With the help of the dog, Op and Ed learn that they are now extinct in reality. That means that their land would disappear and all of their own kindreds would perish as well. They take it on themselves to return back and save the lives of other fellow flummels- as well as find the professor. Along the way, they uncover many truths and make amends for their own behaviour. Lead animator Alaa Afifah’s creations are not distinct as their characteristics, yet they do not strike as unyielding, given that most of the characters are meant to be oddballs.

Even though the plot quickly loses itself to arbitrariness, Extinct manages to keep the action light-weight and pleasing to the eye. The animation is effective in its radiant use of colour and light, although the creations do not look as new as one might hope to be. With a narrative that introduces the Darwinian concept of existence, there is no real bite to it. Extinct feels needlessly diverted to keep the action hustling from one point to another, so much so that it tends to become illogical after a while. Extinct could have been shorter and crisper, given the last thirty minutes stretches itself towards endless twists and turns. Not only for the younger viewers, but it also becomes confusing for the adults as well.

The only characters that stay are the ones right at the centre- Op and Ed. Even though Extinct is filled with multiple characters, none of them serves much. It is only Op and Ed, finely rendered by Bloom and Devine, that stay. The character of the dog, which is finely handled by Jeung, is fuelled with a negative stereotype that felt wholly unnecessary.

Although resolute in its addition of ideas of conservation in a narrative meant for kids, Extinct does little to form a case for survival. The Darwinian concepts mixed with slapstick humour feel out of context altogether. Writers Joel H. Cohen, John Frink and Rob LaZebnik could have helped the script with a bit more polishing. Extinct feels like a film pregnant with ideas and excitement, but not much of it translates on-screen. One wishes the flummels had something to say in defence.