Squid Game (Netflix) – The Nightmare of Karl Marx: More than a century ago, in 1867, Karl Marx made the critique of Capitalism in his seminal work Das Capital that sprawl across three volumes. The dangers of capitalism as proposed by Marx had taken shape of a game in a Korean Dystopian survival drama series that is currently streaming on Netflix. “Squid Game has officially reached 111 million fans – making it our biggest series launch ever!” tweeted Netflix. The popularity of the web series is significant and historical as it resonates with the times we are going through.

The drama series is about a weird game(s) organized by some secret people hiding under masks, where the winner will be given billions by playing children’s games. For some reason, players chosen to play are only the ones who have huge debts, mostly from the working class. The catch of the game lies in the fact that the ones failing in each game will be eliminated, literally from their lives. The fact that the losers will be killed is only known by both the audience and the players after the first game when they actually see a whole lot of people being shot dead on a field. Then the majority decides to vote to not play ahead and leave the premise which is an isolated island. The hardest and weirdest part comes next when the ones who had quit decide to rejoin the game, with the knowledge that it’s a do or die.

The popularity of Squid Game (Netflix) signifies the rising financial inequality across the globe and the masses identifying themselves in the form of players in the show. There won’t be any individual who goes to sleep without having to think twice about his/her financial status, which will always be in short of their requirements. Half of the lifetime will be spent worrying about the ways to accumulate money so that we can survive in this world. The rising debt crisis in South Korea and other countries testifies to the true nature of the decaying capitalist system that accumulates entire wealth to a handful of people. After the global pandemic of Covid, Billionaires got 54 percent richer whereas the majority of the people lose jobs and become poorer. 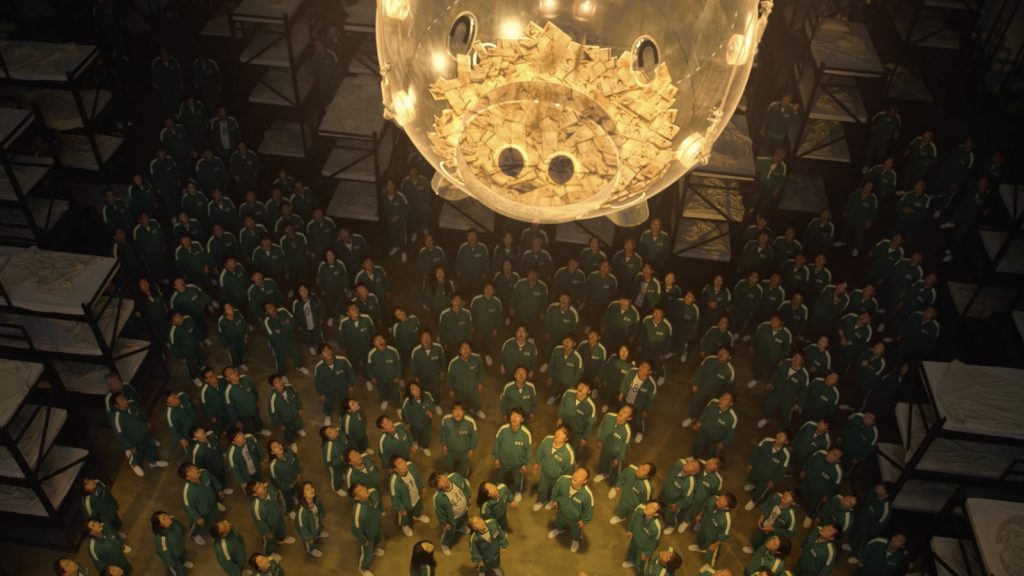 According to Marx, it’s the material conditions of an individual that will determine his wealth accumulation in the future. The hundreds of rags to riches stories around us are just an aberration in a world with 100 million people facing extreme poverty in 2021 (World Bank). There will be hundreds of motivational videos doing rounds in social media that talk about the importance of being super productive and making it big. They will even quote that a large chunk of the wealthiest in the world had started from scratch – Jeff Bezos, Mark Zuckerberg, Elon Musk, etc. This might make one feel that if they work hard then they will also become billionaires one day. But that’s not true because the statistics say the opposite.

Lee Jung- Jae as Seong Gi-hun portrays the protagonist who is the only one in the rat race to show empathy and represent the little humanity that is left in the world. Obviously, the protagonist should be likable and be the good guy, but at a critical point, even he is forced to play a foul card to survive. Even though he’s ridden in his debt, we see him taking his daughter out for her birthday. The kid is living separately with her mother and her new father. To buy a gift for his daughter, Gi hun bets on a horse race and wins a fortune that is to be robbed soon in a subway on his way to meet his daughter. With a handful of money that’s left with him, he plays the jackpot machine that’s filled with children’s Toys, and ironically the toy he gets for his daughter turns out to be a gun which turns out to be a brilliant tool by the Director in foreboding the brutal game that Gi hun is about to play.

The players in the game are in a situation that Marx calls Alienation. According to Marx, what makes humans different from other animals is our capability to create things of our free will. In a Capitalist society, free will lies only with a handful of people, and the vast majority are forced to work for something that’s a necessity for their survival just as animals do. This in turn alienates humans from their true selves and their own labor. All the players in the Squid game are at one point is ready to cheat or kill the others in order to survive. What makes the show fascinating is the revelation of the organizers of the game. In the final chapter when Gi-hun is on the way back after winning the game, he asks the man in the mask who are the real organizers of this game. And the man answers that for them the players are just horses in a race that they bet on. In other words, there is a minority who ran out of options to entertain themselves so that they had to invent a game where they can see people kill each other to gain money for a livelihood.

When money becomes the most important thing of value in the world we live in, we might end up like one of the 456 contestants of Squid Game, playing children’s games with our lives at stake. We live in a world where Money that is supposed to represent value had itself became value like the gin from the bottle. It all dates back to the day when Marx wrote the first chapter of Das Capital- Value. How it’s created and the genesis of it. He said that Value is the human labor time spend to create commodities that in turn represent the value of work.“ Money is the alienated essence of man’s labor and life, and this alien essence dominates him as he worships it” ( Capital, Vol 1).

The content of recent popular films/ shows from South Korea and Japan shows a pattern that’s highly critical of capitalism. Be it the Oscar-winning Parasite, or the heartbreaking parable of a small family in Shoplifters, or the thrilling Snowpiercer that staged a class war in a train that never stops and they all stem from the concern of an unequal economic system we live in. There is no looking back in a capitalist system, whether it’s a pandemic or a financial crisis. The show must go on. Even the worse catastrophes will be seen as opportunities for new markets. Like Netflix and other streaming platforms coming up with content that unravels the horrors of Capitalism.

Extinct [2021] Netflix review : Doughnut-shaped animals' fight for survival is too uneven to register its case