We enter ‘Writing with Fire’ with Meera Devi, the Chief Reporter at Khabar Lahariya, walking behind her, as she goes to Rampal Yadav’s house to interview his wife, who was raped multiple times by four men. Yadav confesses to Meera after the interview that they don’t trust anyone except them, adding that “Khabar Lahariya is our only hope.” Khabar Lahariya (translated in English as Waves of News), an all-women-run online news organisation, is the only of its kind in India with reporters from marginalised communities, mainly Dalits and Muslims, across the state of Uttar Pradesh. These journalists are unafraid to question the authorities, standing beside the common people to participate in their fight for justice in a democracy, as Meera Devi confides in during one of her journeys.

Writing with Fire, directed by Rintu Thomas and Sushmit Ghosh, opportunities us to travel down these roads with a few of the journalists from Khabar Lahariya – Meera, Suneeta, and Shyamkali, among others – as they probe the system for justice and contemplate their professional and personal lives, and navigate the shifting socio-political landscape in the country. 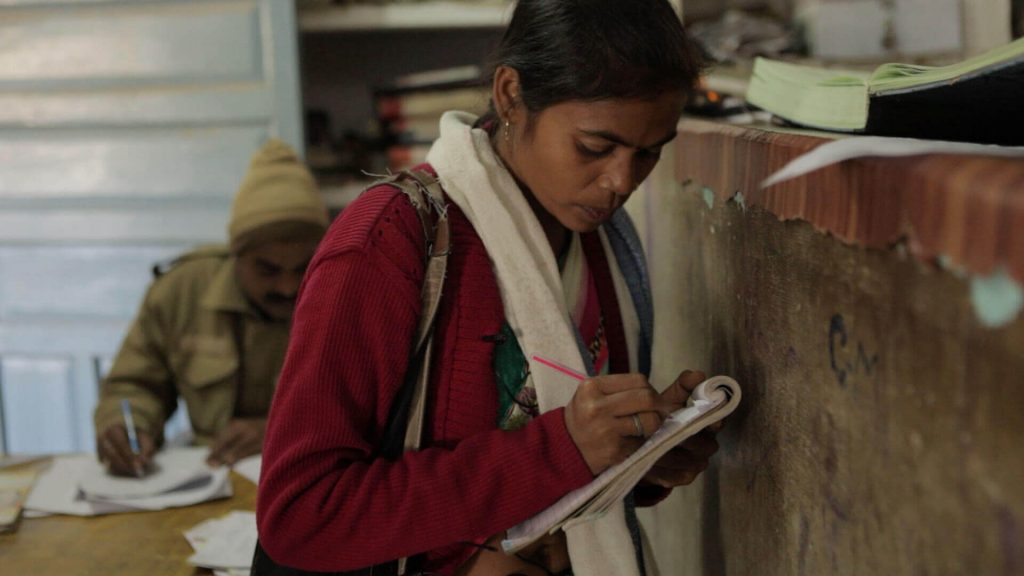 Meera believes that caste identity will always define their status in society, but it is important to challenge the system. Indeed, every woman journalist at Khabar Lahariya is fighting against the system in their own ways. Belonging primarily to marginalised classes, these women bear the brunt of both caste-based politics and patriarchal subjugation. Shyamkali says, as she is making rotis, that people always want to know about her caste; if they belong to a higher caste, she tells them that she is “one of them”. Each of the women, in their own ways, highlights education and their profession as weapons, the metaphorical fire, which fuels their battle towards a more accepting societal space for women, especially belonging from the margins.

In this documentary, the personal fuses seamlessly with the political making us bear witness to the personal journey undertaken by each of the journalists to reach professional heights. Meera is as concerned about her fellow journalists’ education as she is about the education of her daughters. In a particular scene, when the journalists are handed new smartphones for online operations, they express a child-like curiosity and wonder at handling these new technological gadgets, some of them being afraid that they won’t be able to operate them because they don’t know English or will end up damaging them. Suneeta’s detailed confession about not having electricity at home to charge her cell phone for operation or the prank calls she receives is enough to let the audience know that these journalists are juggling their personal and professional lives to train themselves to be able to stand at par with national media during reportage.

I was particularly charmed by two aspects of ‘Writing With Fire’. First, the men’s reaction to the work of the organisation and the working women. A handful of male journalists are seen advising Suneeta about how to talk with officials while her father’s mocking, apparently playful, insults about the nature and timings of her work make it seem like men cannot think of women as fit to work outside their kitchen. Pinpointedly, Meera’s husband confidently declares that he had never expected them to achieve anything. He is quick to add that even though they are managing just fine, they won’t be able to do it for too long. Yet, here they are – over 100 million views on YouTube and Meera being promoted to a higher position within the organisation.

Second, the documentary doesn’t limit itself to the story of the hardships. It stresses equally on their high rates of success. I felt a warm tide in my heart when Suneeta proudly reported from one of the beaches at Colombo, Sri Lanka. The constant increase in the number of subscribers on Khabar Lahariya’s YouTube page served as a constant reminder that despite all odds, the fourth pillar of democracy, journalism, was still standing strong, being acknowledged and supported. Not only that, all the stories reported by these journalists – rape cases to reports on illegal mining – successfully managed to draw the authorities’ attention. Besides, their success rate forces the audience to acknowledge the constant tension between the age-old norms of society and these pathbreaking journalists, forcing them, in turn, to acknowledge women working their way upwards to break the glass ceiling of patriarchy.

India happens to have climbed down the ladder of journalistic freedom and safety, according to the latest World Press Freedom Index, from the 133rd rank in 2016 to the 142nd rank in 2021, coinciding with the rise in power of the BJP government across the country. In one of the scenes, when Khabar Lahariya’s journalists took a trip to Kashmir, we come to know that they had already started expressing their concern aloud over the safety of women and the increasingly hostile, religiopolitical environment developing in the state. Yet, they haven’t backed down. With mobile phones in hand, they continue to investigate the truth – from political rallies during elections to Ram Navami processions – knowing fully well that they could be targeted by belligerent forces in power.

Winner of several awards and nominations at prestigious film festivals around the world, including the awards for World Cinema Documentary Special Jury Award: Impact for Change and the Audience Award: World Cinema Documentary at the Sundance Film Festival 2021, Writing with Fire is an exceptional insight into this world of grassroots-level journalism, deserving more appreciation in this current day and age where media is barely any different from show business.