Glendyn Ivin’s Penguin Bloom adapts Cameron Bloom and Bradley Trevor Greene’s book of the same name, telling the true story of Sam Bloom (Naomi Watts), who, after a tragic accident in Thailand, becomes paralyzed from the waist down. After one of her children finds a stranded and injured magpie on the beach and decides to nurture it back to health, Sam grows fond of the bird and starts to find hope after her way of life was drastically changed. Its first act checks every box in the “Melodrama 101” book, with a protagonist having no will to live and on the brink of despair. Its predictability doesn’t improve afterward, as Penguin Bloom lacks the sole ingredient that makes dramas great: character exploration.

Related to Penguin Bloom – Why Lesley From Birdman Could Be Betty From Mulholland Drive?

Penguin Bloom barely scratches the surface of “character exploration” by making Sam’s relationship with “Penguin” the film’s main focus. However, there’s never a legitimate connection between Sam and “Penguin”. At first, she’s apprehensive of having a “wild” magpie at home but grows to appreciate its presence. That “appreciation” is never shown on-screen; we lose key moments of development for the story to move forward faster than it should be. Because of this, the audience is scarcely disconnected from what’s happening on-screen vs. off-screen. Not everything has to be shown–I get that–but showcasing the moments where the character grows as a better human being is at the core of a great drama. 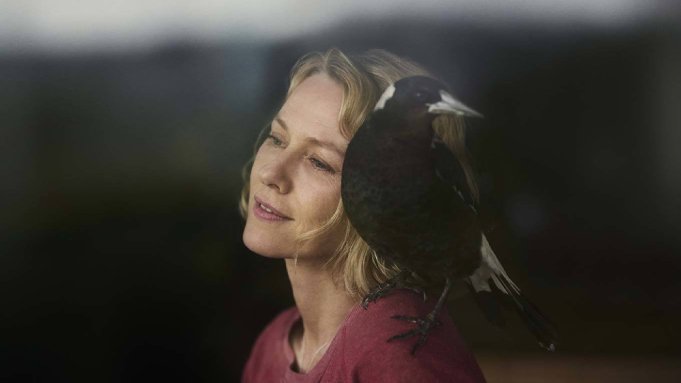 It doesn’t help that the relationship between Sam and her family is wholly underdeveloped. It feels as though we’re only seeing the first draft of a compelling family drama because its star-studded cast of Naomi Watts, Andrew Lincoln, Jacki Weaver, and Rachel House all give terrific performances. The film’s best sequence happens when all of the actors are together, during Sam’s birthday, where Jan (Weaver) worries about Sam’s disability at the dinner table. There’s a genuine sense of tension between all of the actors, which elevates the best-written moment of the movie beautifully. Nothing beats dinner table drama when done right, and Ivin makes sure that the “core” sequence of the movie is directed and acted brilliantly.

Throughout the film, you can feel the palpable chemistry between Lincoln & Watts as Cameron and Sam Bloom, one of the few elements the film does have going for. There’s authentic care brought by Andrew Lincoln and Naomi Watts’ portrayal of the Bloom couple, making the film feel like an easier watch. Yet, every predictable trope found in dramas is present, with no advancement on Sam’s arc from beginning to end. We’re mostly forced to watch a character unnaturally develop, with the key moments of understanding Sam’s psyche and sudden will to live again happen off-screen. The audience doesn’t feel like there is genuine development and exploration of Sam’s relationship with “Penguin.” It is the sole reason why the film does not “soar” as it should be. If the film concentrated on Sam’s character and didn’t quickly rush to the ending, trying to cover as many spheres of Sam’s life as possible, maybe it would be a worthwhile watch, but alas.