Azor, the multi-lingual French-Argentine-Swiss production, is a tacit portrayal of the high-class apathy that often goes hand in hand with the goal of wealth accumulation. In doing so, it is the majority in the lower socio-financial rung that gets steamrolled when chaotic opportunities arise. Writer and Director Andreas Fontana languidly tells a story that is reflective of such, in a quite nuanced way.

Azor opens with private banker Yvan De Wiel and his wife, Ines, sitting in the backseat of their luxurious ride to the hotel; looking at students and protesters manhandled by the military junta that was in power in 80s Argentina. Yvan had to arrive at Buenos Aires, under tumultuous circumstances, because his partner, a certain mister Keys, has gone missing. The objective of this trip is to mollify the extremely rich clientele of their firm. But, it is also to find opportunities in the chaos.

Fontana smoothly orchestrates the events that unfold on screen. There is hardly any hint of violence there, only occasional cold-blooded business deals. But, under that restraint, the violence of the military occupation becomes even more vivid. Fontana’s camera moves and follows the posh interiors of luxurious hotels and clubs, sapphire blue swimming pools, lush greens of country houses, and muscular racehorses. All of these are testament to the glossy surface underneath which a country kept burning. 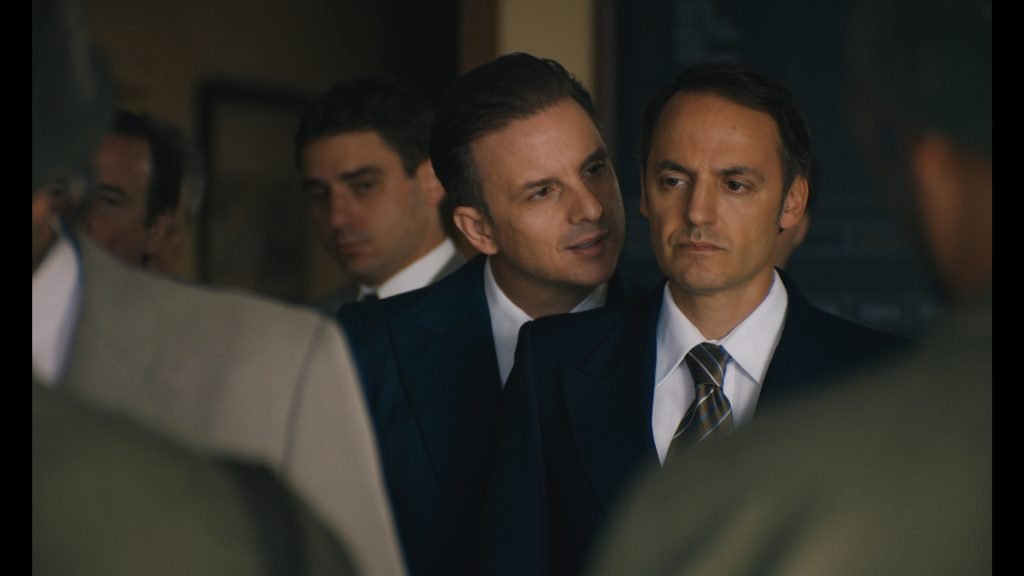 In the film, Yvan, with help from his vaguely formidable wife, Ines, continues to visit a variety of clients. As he spends more and more time with the Argentine aristocracy, he finds layers of problems to keep the clients satisfied. The film ponders laboriously in Yvan’s efforts to keep the proverbial boat floating, while also providing a look into the psyche of the characters of the upper echelon of society.

And the variety in this clientele, along with the constant enigma of the disappearance of Keys, would make the journey of Yvan, and thus the story, quite intriguing. Yvan’s journey does not sail as smoothly as he would have hoped though. He finds more and more compromising obstacles that his predecessor Keys apparently went through without much problem. The disappearance of Keys also serves as a reminder of the outer world, where there is much uncertainty.

In these situations, we see the ‘Lady Macbeth’ side of Ines as she whips a “Fear makes you mediocre” line towards Yvan. Stephanie Cleau’s intentionally subdues her portrayal of Ines till that moment. Much like the film, its leading characters, like Ines, are not all that they seem to be on the surface. She is not just out there on a trip with her husband; she is as much invested in the struggle to remain at the higher rung as her husband is.

About her husband, Yvan is portrayed by Fabrizio Rongione, and Rongione has this old-school Hollywood suave in his portrayal of Ivan. The kind of conflicted leading heroes we used to see in Golden Age Hollywood, Rongione’s Yvan had that charm about him. He was able to make Yvan a character that very much belongs to a luxurious hotel room with his suit on, a character who is quite deft at handling the whims of his wealthy clients, and getting rich while he was at it; with just the right amount of self-doubts.

As the film’s story mostly revolves around Yvan interacting with his rich clients, the audience gets transported to places that are neat and so well-decorated that it would seem right out of a vividly constructed tableau. And ‘neat’ is the perfect word to describe the cinematography and production design of the film, which quietly mirrors the state that the high class desperately attempts to maintain.

In one conversation, the meaning of the word ‘Azor’ reveals to be something akin to turning a blind eye towards the dichotomy of right and wrong when faced with the prospect of profit. The climax that Fontana chose, thus, seems such nuanced and fitting in that way as Yvan, in the heart of the jungle, turns a blind eye to the perils of the wilderness and concentrates toward enjoyment of the calm river ride. The benefits of Azor.