Reactions on Kazuo Hara and the unflinching documentaries he makes can be widely divisive. Some may call him a genius, and some may berate him as a notorious sensationalist. And none of the documentaries in Mr. Hara’s oeuvre would draw such divided opinion among its viewers like The Emperor’s Naked Army Marches On (Yuki yukite shingun, 1987). At its core, the documentary takes a slingshot at the conformist Japanese society which still speaks of its appalling war-time history in hushed tones. But Hara does it through a very controversial yet a fascinating figure: a gaunt, tall 63-year-old Pacific War veteran named Kenzo Okuzaki (1920-2005), who at one point in the documentary openly declares, “As long as I live, I’ll use violence, if it brings good to mankind.”

The documentary opens with a traditional Japanese wedding. The bride’s father – focus of the documentary – after congratulating the couple and introducing the groom, coolly proclaims that he killed a real-estate broker, hit the Emperor with lead pellets using a slingshot, distributed pornographic images of the Emperor, and for all he served more than thirteen years in prison. Mr. Okuzaki finishes his speech by stating that the groom has also ‘fought against the establishment’, and it’s the reason for him approving the marriage. This introductory passage brilliantly sets up Okuzaki’s relentless crusade to unearth the hidden truths by any means necessary.

Unlike the conventional Japanese belief that absolved Emperor Hirohito for Japan’s World War II atrocities, Kenzo Okuzaki obsessively campaigns that the Emperor bears all the responsibility for the war-inflicted trauma. He clamorously makes this point in public and even gets arrested. He makes it his life’s mission to seek explanations for the suspicious death of two fellow soldiers (Privates Yoshizawa and Nomura), happened immediately after the end of the war. Soldiers who were stationed with him in New Guinea. Tracking down the surviving soldiers and officials, he ambushes them with the film crew and doggedly fishes out the truth behind the military-sanctioned killing. At first this looks like a noble crusade of a traumatized war-veteran seeking justice for his innocent comrades. 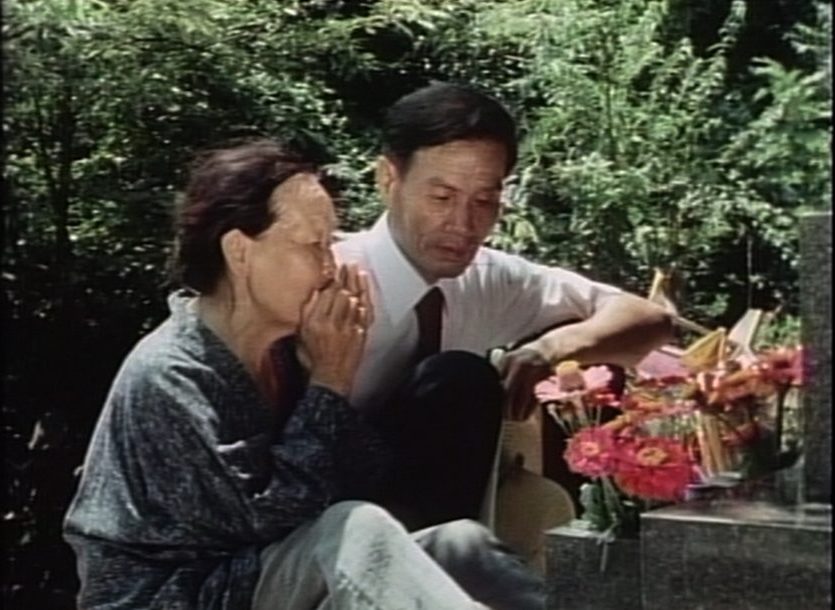 Early in the documentary, Okuzaki visits an elderly woman whose dead son was part of Okuzaki’s regiment. He assures her that her son was properly buried in New Guinea. Later, he walks with the woman to her son’s grave in the village, the camera poignantly observes the old woman singing a song. Next, he starts visiting other war-veterans who were supposedly present during the needless execution of Yoshizawa and Nomura. Okuzaki introduces himself, apologizes for unexpectedly visiting them. After a reluctant invitation, the two men and the film crew sit within a cramped space (hence at times the camera equipment and microphones are visible in the frame). The host’s wife and even their granddaughter pop up in the frame and greet Okuzaki.

Related to The Emperor’s Naked Army Marches On: Fires on the Plain [1959] Review – A Potently Realistic Vision of War’s Devastating Impact on the Human Soul

Immediately he brings up the reason for his visit and starts grilling his host. Upon receiving evasive answers, Okuzaki openly abuses the man, calling him a liar, a coward, etc. When intimidation doesn’t yield the desired results, he starts beating the man. What’s more intriguing is the way Okuzaki’s collaborators – the film crew – passively yet also determinately film everything, even when the family calls the police. Nevertheless, Okuzaki’s tactics to ambush the now-elderly war-veterans with the camera does bring some results, making us wonder about the argument: ‘ends justify means’. In the later visits, Okuzaki also takes Yoshizawa’s sister and Nomura’s brother with him so as to induce the interviewees’ guilt.

The commonly held notion behind the soldiers’ killing was that they were deserters. But that doesn’t make sense because they were killed after the end of the war. One of the members of the dead soldiers’ unit speculates that Yoshizawa and Nomura resorted to cannibalism. The ex-soldier also goes on to describe what the terminology ‘pigs’ really meant for the starved soldiers. He nonchalantly confesses that white meat represents the white soldiers, whereas dark meat means the natives. Hence both the brother and sister of the dead Privates feel that their siblings were killed to be cannibalized. Or they might be murdered because of their objections to cannibalism. The truth remains elusive as each of the ex-soldiers and ex-officer offer a different version, duly absolving themselves from culpability.

Yet, Kenzo Okuzaki persistently moves forward with his quest even when the siblings of the murdered soldiers quietly drops out, probably shocked by Okuzaki’s intimidating tactics. In one of the darkly humorous sequence, Okuzaki asks his wife and friend to playact as those murdered soldiers’ relatives. He eventually meets the Captain responsible for passing the order to kill. Furthermore, Okuzaki revisits the man he beat up earlier and receives chunk of truth behind the killings.

What follows is the most riveting yet morally questionable scenario in the documentary, where Okuzaki drops in on his feeble war-veteran friend, just back home after a surgery, to question about another suspicious death of a soldier. When the frail old man feels uncomfortable in discussing about the issue, Okuzaki pushes him to the floor and starts kicking him. The family and Okuzaki’s wife tries to intervene, and the old man receiving the beating shouts at the camera, “You just film it and do nothing?”

Although The Emperor.. seems to follow the cinema verite tradition (austere style, handheld camera footage, unruly editing) by capturing reality with all its contradictions intact, critics condemn Hara’s central character’s penchant for provocation which befits the maneuvers of a muckraking reporter. Mr. Hara himself has said that, “I try to forcibly generate action with the camera. I try to wrench it into existence. With deliberate force.”

In fact, the biography book on Kazuo Hara was titled, “Camera Obtrusa: The Action Documentaries of Hara Kazuo”. Moreover, Hara’s provocative film-making style has been admired by the infamous master of confrontational film-making Michael Moore (“It was like I had this soul brother in Japan… I was inspired, I was exhilarated. I had never seen anything like this”). Errol Morris, another important American documentarian who transcended the boundaries of documentary film-making, calls Kazuo Hara, “one of the undiscovered geniuses of documentary”, and lists The Emperor’s Naked Army Marches On as one of his top five favorite films.

Questions of what’s real and what’s staged will keep haunting our mind. The interview Hara gave to Kenneth Ruoff in ‘A Journal of Theory on Image and Sound’ (Spring 1993) reveals a lot of jaw-dropping details, including Okuzaki approaching Hara to ‘film him killing someone’. Nevertheless, what I find interesting is the way through his incendiary mode of film-making, Hara questions a documentarian’s relationship with his subject, and their combined relationship with the viewer. While Hara could be accused of being passive and grossly negligent, we the audience alternately feels fascination and discomfort as Kenzo Okuzaki unabashedly champions his nihilistic behavior. As inexorable and messy as this is, director Hara does deeply explore emotions and truths that society doesn’t want us to inquire.

Influenced by the student and labor movement in the 1960s and 1970s Japan, Kazuo Hara hails from the Shohei Imamura school of film-making, the maker of anarchic narratives and the one who declared, “I am interested in the relationship of the lower part of the human body and the lower part of the social structure.” In fact, the idea for the documentary was originally conceived by Mr. Imamura (who has served as the executive producer). Overall, despite the thoughtful ethical questions raised by The Emperor’s Naked Army Marches On (121 minutes), it is one of the most distinct works in the world of documentary film-making, and singularly unparalleled in the manner it evokes both bewilderment and poignancy.