Jim Jarmusch’s movies often spring up from the characters; or he creates characters with a specific actor in mind. After a bunch of rehearsal sessions, a narrative of sorts is developed with the actor bringing out the character’s idiosyncrasies, eccentricities and vice-versa. From his NYU final year project short film, Permanent Vacation (1980) — which he turned into a 80 minute feature-film – to the recent underwhelming zombie comedy, The Dead Don’t Die (2019), Jarmusch’s ultra-cool existential features are strictly patterned around ‘right’ actors and minimalist aesthetics. Coffee and Cigarettes (2003), a compilation of eleven black-and-white shorts the film-maker made between 1986 and 2003, is no different.

Coffee and Cigarettes is not the first time Jarmusch is dabbling with an episodic, modular narrative although with this he strings around lot of episodes (some poignantly minimalistic; some bafflingly superfluous). The director’s 1989 film Mystery Train simultaneously dealt with three vignettes (set over a night at a dreary Memphis hotel) and Night on Earth (1991) presented five taxi encounters, replete with the typical Jarmuschian absurdist deadpan humor. The film-maker’s penchant for designing little ‘echoing’ gags — that uncannily connects different characters (or episodes) — is also one of his recurring motifs which is extravagantly used in Coffees and Cigarettes. Under Jarmusch’s precise direction, what may seem repetitive in terms of plot frequently achieves a poetic rhythm, interleaved by greater sense of irony; a trait he has acquired from the master he reveres – Yasujiro Ozu – and finds its echo in the works of his contemporary, Aki Kaurismaki. In fact, you’d have to experience a Jim Jarmusch movie first-hand to appreciate its profound meditative quality. 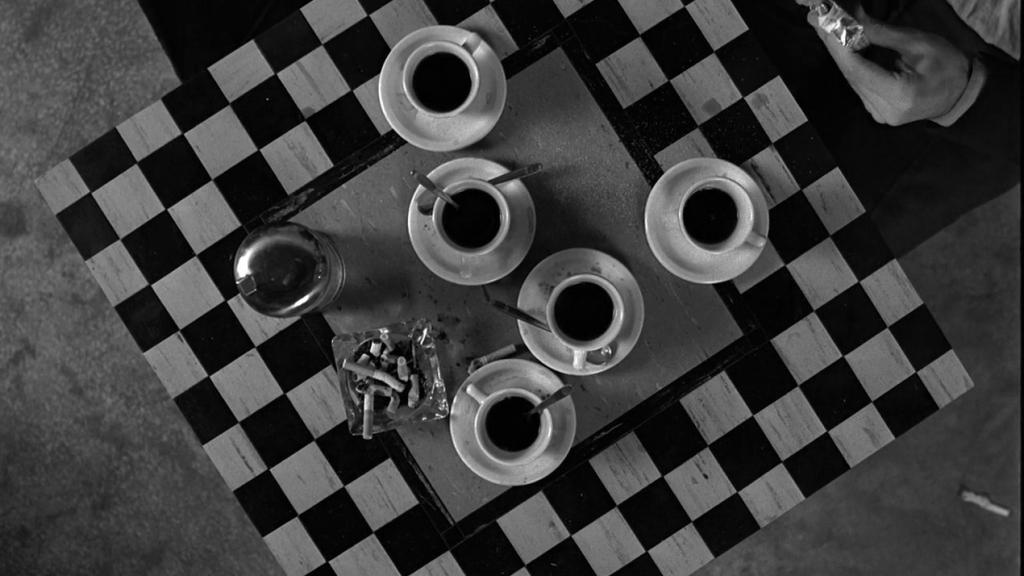 In an interview to Indiewire, Jarmusch states: “I think our lives are made up of little moments that are not necessarily dramatic, and for some odd reason I’m attracted to those moments.” Similarly, the unencumbered and largely improvised vignettes in Coffee and Cigarettes zeroes-in on the contrasts, mysteries, simple pleasures, and desolation in the quotidian life as people come together for cups (or pots) of coffee and pack of cigarettes (matching a real-life coffee break most episodes runs for 10 minutes). The episodes unfolds over a series of static shots (punctuated with over head tabletop shots and the standard shot-counter shots) and brilliant geometric patterns (predominant is the checkerboard design for denoting the coffee [black] and cigarettes [white]). The backdrops keep varying – from elegant hotel lounges, cafes to dismal warehouses. The fun part is the incompatible pairings of the players, mostly celebrity actors and musicians assuming a slightly fictionalized (or an exaggerated) version of themselves.

In the opening episode, Strange to Meet You – filmed way back in 1986 as a short for Saturday Night Live – two destitute characters find themselves totally unable to attune to the other’s wavelength. It’s the very minimally plotted, yet a jokier one where Roberto Benigni and Steven Wright outshine each other with their sillier performances. The gently absurd sketch comedy is followed by ‘Twins’ that’s set in Memphis coffee shop (reminding us of Mystery Train). The Lee twins (Joie Lee & Cinque Lee) contend over who is copying whom, while a waiter (Steve Buscemi) offers his theory on the twin brother of Elvis Presley. The twins ridicule his fascination with Presley through a scathing indictment on the legendary performer’s alleged transgressions. The waiter counters it while eyeing the hostile twin: “No, you see that wasn’t Elvis. It was his evil twin.”

The linguistic and personal mismatches are followed up with a mostly playful staging of misunderstanding between two top musicians: an enjoyably goofy Iggy Pop meets the deliberately passive-aggressive Tom Waits in a jukebox bar. Iggy’s tentative attempts at smooth conversation are thwarted by an overly self-assertive Waits. It ends with them awkwardly parting ways, but not before sharing a smoke, enjoying a cup of coffee, and charged with smug feeling that none of each other’s songs are on the bar’s jukebox. The fourth segment features Joe Rigano and Vinny Vella, who both played gangster roles in Jarmusch’s Ghost Dog (1999). Their undramatic argument of course revolves around coffee and cigarettes, and it’s not one of the sketches to lack a punch. Episodes titled ‘No Problem’ and ‘Jack Shows Meg his Tesla Coil’ are also annoyingly one-note and rhythmless. 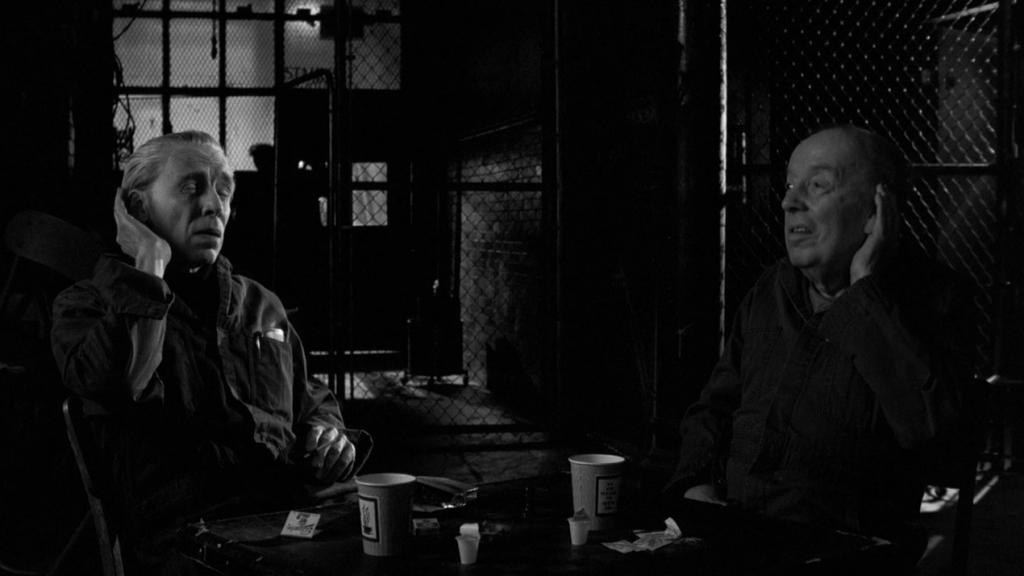 ‘Renee’ is distinct as it features a woman enjoying her solitude, smoking cigarettes and drinking perfectly mixed coffee, while going through a ballistic magazine. Her state of reverie is nevertheless constantly interrupted by an overly attentive waiter, obviously enamored by her beauty and driven by the eagerness to engage in conversation. The vignette suggests that coffee and cigarettes aren’t just offering a chance at sociability amidst the onerous routine, but these stimulants add an extra-layer of pleasure to one’s choice of being alone.

Jarmusch gets back to his pet themes of incommunicability and human silliness in the episodes, ‘Cousins’ and ‘Cousins?’ Both these elaborately structured episodes – featuring actors with whom Jarmusch didn’t previously work (Cate Blanchett, Alfred Molina, and Steve Coogan) – provides a mild discourse on how communication can breed rivalry and misunderstanding; or how constant communication can sometimes only emphasize our inability to communicate. However, the titular stimulants are merely reduced into a prop in these episodes (Coogan only sips tea).

Music and medicine are once again juxtaposed in the episode ‘Delirium’, where the health-conscious RZA and GZA of the Wu-Tang hip-hop clan teases the caffeine-addicted Bill Murray (he drinks straight from the pot). Again it’s one of the episodes that rely much on the actor’s quirkiness and cyclical rhythm of dialogues (caffeine popsicles and fast dreaming), particularly the joke that Bill Murray is wearing a disguise. The placid final episode, ‘Champagne’, featuring Taylor Mead (known for appearing in Andy Warhol’s underground films) and Bill Rice (a painter of the avant-garde art scene), sees Jarmusch at his most intimate mode of film-making.

Mead and Rice play aged janitors toasting to Paris of 1920s and New York of 1970s respectively. It’s both an ode to the Jarmusch’s (disoriented) working-class characters and reinforces the director’s predominant existential musing through Gustav Mahler’s song, titled “I Have Lost Touch with the World”. Despite little squabbling, they are the less emotionally distant (yet very elderly) pair of the eleven vignettes, which is maybe why they are often shown together in a single frame, unlike the chief players in other episodes. This is probably the most endearing episode to reminisce.