Despite being uneventful or anti-significant, the life of Paterson is weirdly fascinating to observe. Jarmusch gradually unlocks the richness and depth of quotidian life, kindling our desire to be a wordsmith; not to build an ambitious career through words, but just to connect one’s self with the ordinary life he/she is living. 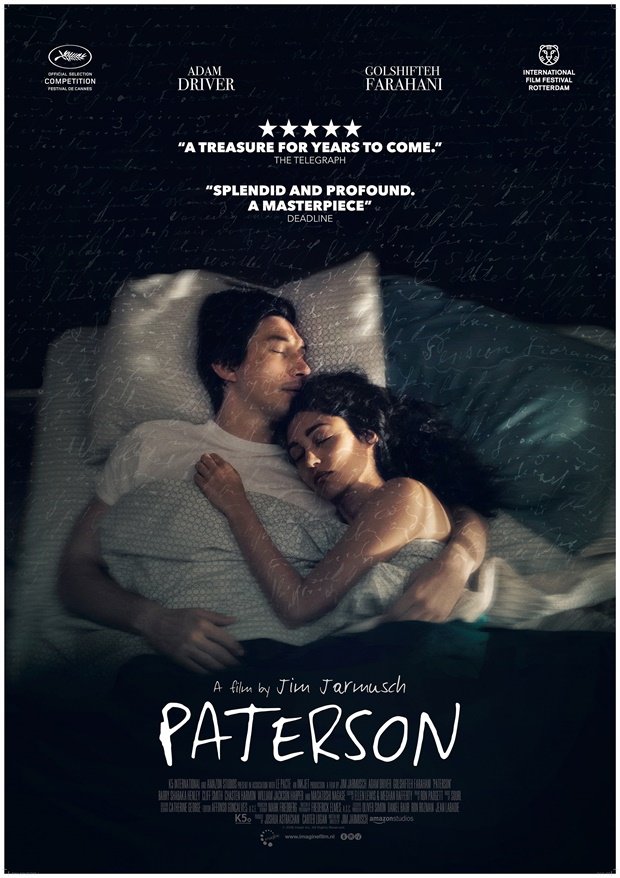 For extraordinarily humane film-makers like Jim Jarmusch, cinema is an open form. The quiet, observational realism that drives their creative process seems to say ‘To hell with all your script-writing rules!’ While writers introduce certain elements which work as vital force in the story, Jim Jarmusch adds all beautiful, minute details that are something free of significance. He says the intention is to ‘go for the anti-significant’; to observe the funny, whimsical deviations from the mundane as well as little joys in the routine. Mr. Jarmusch had been practicing such mode of Zen-like restrained film-making from his feature-film debut “Permanent Vacation” (1980). And in his recent film Paterson (2016), he amalgamates all those familiar elements to create yet another powerful, deeply felt personal cinema. Paterson is a relaxed comedy about everyday life and rumination on the democratic quality of art – here it’s poetry.

Jim Jarmusch’s connection with poems runs deeper. He came to New York (from Ohio) and enrolled in Columbia University with an intention to become a poet. In the interview to filmcomment.com, he says that prominent American poet Frank O’Hara’s words had a big influence on him: “Don’t write poetry to the world. Write poetry to one other person. Write a love note to someone you love, or write a little poetic letter to someone you know”. Although, Mr. Jarmusch didn’t end up being a great poet and turned to music and film-making, his cinema stays true to Mr. O’Hara’s words. He doesn’t want the whole wide-world to digest his views; he just makes cinema to connect with a fellow, poetic soul (the director referred to famous poets in his films Dead Man (William Blake) and Only Lovers Left Alive (Christopher Marlowe)). While Dead Man’s William Blake wrote ‘poetry with blood’, Paterson’s poetry tinges the world he sees (and lives) with quiet, beautiful emotions.

Adam Driver plays an introspective bus driver named Paterson, who is living in Paterson, New Jersey. He respects the ordinariness of his blue-collar job and in the spare time writes poems, elevating the quotidian into sublime. He shares his calm domestic life with his astoundingly expressive and deeply understanding girlfriend Laura (the brilliant Golshifteh Farahani). The narrative unfolds over a single, uneventful week of Paterson’s life (the city is also as uneventful as the individual as if the protagonist is the representation of the city). The film opens with an overhead, static shot of Paterson, curled up blissfully beside Laura. He has his silent magic watch that wakes him up from slumber, more or less fifteen minutes past six. After having a simple breakfast of cheerios and a cup of coffee, Paterson walks to the bus depot with a tin lunchbox. The box of matches he casually held back in the kitchen counter makes him compose poetry in the head during this walk, which he later notes down at a secret notebook, while sitting at wheel of the bus, before starting his shift.

Paterson eats his lunch by the city’s famous Great Falls (of the Passaic River) and writes some more; after work he walks back home; has dinner with his girlfriend; takes out the mischievous bulldog Marvin for a walk; stops for a nightcap at the local bar and chats up with elderly owner Doc (Barry Shabaka Henley), who is also Paterson city’s unofficial art historian. The next day begins with the same static, overhead shot and once again life flows like a poem: with all its familiar rhythms as well as little, magical digressions. While Paterson seems self-absorbed, he totally lives in the moment and takes in every small detail of the surroundings. Sometimes he overhears the exuberant and bittersweet conversations of the passengers. Laura, who is big fan of Paterson’s poem, encourages him to make a copy of his ‘secret notebook’ and share it with the world. The couples acknowledge each other’s indefinable spark – Laura shows her artistry through strange experiments in cooking, decorating house, and newly developed desire to be a country singer. They might seem mis-matched, but they love each other for who they are. Despite being uneventful or anti-significant, the life of Paterson is weirdly fascinating to observe. Jarmusch gradually unlocks the richness and depth of their quotidian life, kindling our desire to be a wordsmith; not for the sake of building an ambitious career through words, but just to connect one’s self with the ordinary life he/she is living.

Writer/director Jarmusch treats every people of his world with compassion and respect. Here, there’s a minor character named Everett (William Jackson Harper), a regular in the bar and a amateur actor crazily in love with a out-spoken girl named Marie. She doesn’t want him and he can’t let her go. Everett’s desperation lends a tragicomic quality, yet the narrative treats him with kindness. In Paterson, Paterson always finds something positive or richly contemplative just around every corner. The central character’s idol William Carlos Williams, a New Jersey poet who worked as a pediatrician, has huge presence, driving him to offer precise description of things he sees. In his regular path to home, a beautiful chance meeting with a super-smart 10 year old girl is conjured, who also happens to be interested in poetry and reads from her own ‘secret notebook’ a poem titled ‘Water Falls’ (‘two words, though’). This meeting is one of the many examples, where Jarmusch’s hero always finds something around the corner to brighten up his day. May be ‘Paterson’ is like every other city in this world with its own set of conflicts related to ethnicity, politics, etc. But our Paterson experiences his world in a different manner; by taking in each moment and weighing its significance, while never being caught in the moment that passed. Self-absorption or self-centered nature never looked this magnificent in a movie.

The biggest strength of ‘Paterson’ is the way director Jarmusch gracefully lines up our perspective with Paterson’s. Initially, the loudly read poems may seem preposterous, but slowly we evolve and see the world through his eyes. Every simple conversation he overhears or engages in is rife with interesting details that we begin to wonder how much it would inspire him to weave a poem. When the ‘Moonrise Kingdom’ stars (Kaya Hayward and Jared Gilman) appear for an interlude, discussing the anarchists of Paterson city, we too are embroiled in this obscure history of an American city. Like the bus driver/poet protagonist, our senses too adjust in order to find repeated patterns and make the odd connections. The recurrent appearance of identical twins (six) is a good running joke, which serves as the function to make us a sharp observer like Paterson. 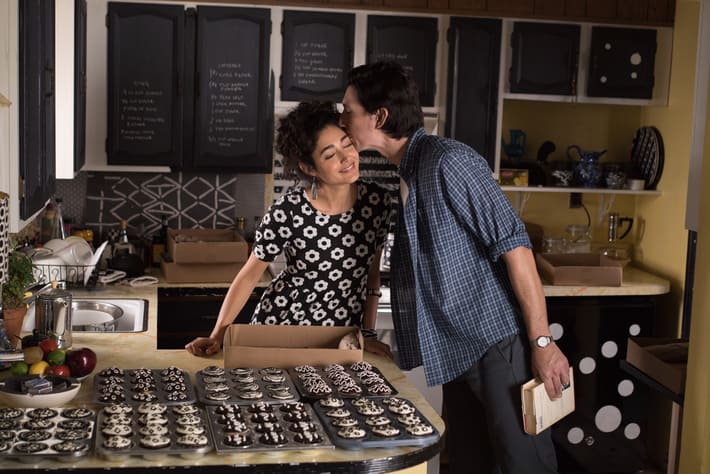 There are no events in Paterson’s life. Hence, there’s no payoff. Jarmusch teases us with what could be turned into events in a regular cinema; for example, the prospect of dog-jacking or breakdown of the bus. The narrative is just riddled with small episodes laced with brilliant wry humor. The only big payoff we get is the answer to the mystery behind crooked mailbox (and a very hilarious one too). Nevertheless, even the small episodes are philosophical and profound than events or big set-pieces. Jarmusch’s subtle humor and wisdom flows through his observation of human oddity, which reminds us of the people we come across in our own working life. Some of them are like the mournful dispatcher Donny; and some like the awkward construction workers, discussing about women they fancy whom they are reluctant to date. I loved the deliberate analogous nature of Jarmusch’s characters (“I just want to shove them out the way and say: ‘Look, there’s a fucking world going on! What is your problem?!’ I get so frustrated”, says the director when asked about smartphones in an interview). The life of an artist, unburdened by clamorous technologies is so lively to witness. Although the film doesn’t have big stylistic flourishes, the most fascinating one is the superimposed shots of Great Falls with Paterson’s hand (writing in notebook) or Laura’s face – suggesting that the poem has come to full fruition.

‘Paterson’ also has one of the best pragmatic romances in the recent years of cinema. A little tweak of Laura’s character — who takes on new pastimes like painting, baking, and guitar playing — could have turned her into a ridiculous person. Part of the reason why we find Laura warm and optimistic is because of Jarmusch’s writing; the other part rests in Farahani’s stupendous performance. She conveys a deep affection for Adam Driver’s character. Her idiosyncrasies leads to good-natured comedy rather than being a source of mocking. Paterson is a follower of regular rituals. He can drift from his routine, now and then to write poetry. But, Laura is always on the look out for different possibilities and her artistic soul tries to turn each of the possibility into an art. Despite the fundamental difference, they are compatible with each other, primarily because of their deep understanding of cohabitation; and because of how they have control over their environment (not the other way around). Neither the domesticity nor the blue-collar job conjures a boundary between them. There’s no attempt for oppression or domination. Their love and contentment simply flows through, accepting each other’s temperaments and oddities. That to me is a glorious image of love. Adam Driver’s muted performance never threatens to become stoic. He conveys his gentleness with being too self-absorbed. The movie resolves with a superb, thoughtful conversation between Paterson and a Japanese poetry lover (Masatoshi Nagase — previously starred in Jarmusch’s Mystery Train (1989) and recently in Naomi Kawase’s acclaimed drama Sweet Bean (2015)). ‘Sometimes an empty page presents more possibilities’, says the Japanese guy, diffusing our thoughts with positivity to turn the remaining empty pages of our life into something beautiful.

‘Paterson’ (118 minutes) is a remarkable and satisfying commentary on the beauty and joy of quotidian life. It’s also a celebration of the indefinable or unrealized artistic spark that resides within all the gentle, inquisitive souls.

My token of Gratitude and Appreciation for Into the Wild